THE SUPER SIX: TV SHOWS THAT COULD USE SOME QUICKSAND

I figured my version of a Top Ten list should have a more TV-oriented name. So I'm changing it from "The Deep Six" to "The Super Six"........

My thanks to Bill Crider for sharing this story:

For now, quicksand has all but evaporated from American entertainment—rejected even by the genre directors who once found it indispensable. There isn't any in this summer's fantasy 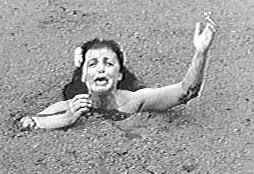 blockbuster "Prince of Persia: Sands of Time" or in last year's animated jungle romp "Up". You won't find quicksand in "The Last Airbender" or "Avatar", either. Giant scorpions emerge from the sand in "Clash of the Titans", but no one gets sucked under. And what about 'Lost'—a tropical-island adventure series replete with mud ponds and dangling vines? That show, whichended in May, spanned six seasons and roughly 85 hours of television airtime—all without a single step into quicksand. "We were a little bit concerned that it would just be cheesy," says the show's Emmy-winning writer and executive producer, Carlton Cuse. "It felt too clichéd. It felt old-fashioned."

For more, click here.
I felt bad when I heard about this. The threat of quicksand has always sent a thrill up my spine - the scenes on the moors in "The Hound Of The Baskervilles"; I can still recall Stephen King's description from the victim's P.O.V. in the novel "The Dead Zone". The Fire Sands scene in "The Princess Bride".....

Here's some information on the quality of quicksand from Wikipedia:

Quicksand is a colloid hydrogel consisting of fine granular matter (such as sand or silt), clay, and salt water. Water circulation underground can focus in an area with the optimal mixture of fine sands and other materials such as clay. The water moves up and then down slowly in a convection-like manner throughout a column of sand, and the sand remains a generally solid mass. The water lubricates the sand particles and renders them unable to support significant weight. Since water does not usually go up to the surface of the sand, the sand on top appears solid and can support leaves and other small debris, making quicksand difficult to distinguish from the surrounding environment.

So here's my "Super Six" suggestion - Six shows that should have quicksand used and in some cases, often!

1) 'Miami: CSI', 'Dexter', 'Burn Notice', 'The Glades'
I probably could have filled this list with all Florida shows, but where's the sport in that? These four shows are still on the air and they all have close proximity to the Everglades.

2) 'Spartacus: Blood And Sand'
You've already got the sand in the title; it'd be a shame not to put it to good use with the gladiators!

3) 'Glee'
Come on, you love them now, but I believe the time will come when you'd like to see Kurt or Rachel or somebody on this show sink without a trace.

4) 'Memphis Beat'
It's on the Mississippi River and it has the Memphis sand aquifer. Sounds to me like they should have at least one quicksand scene....

5) 'Mad Men'
Come on! They drove a John Deere tractor through the office! Surely they can work in some quicksand upstate. Be a mighty fine way to get rid of Betty Draper once and for all! 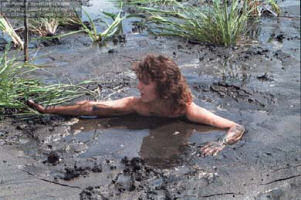