Up front I have to admit that until earlier this year, I had never even heard of our Halloween inductee.  As is the case with most of the Tuesday News Day stories I've posted this year, this post would not have been possible without so much help from Rob Buckley of "The Medium Is Not Enough", the fourth most popular TV blog in the United Kingdom.  (As Rob once said, "Suck it, Number Five!") 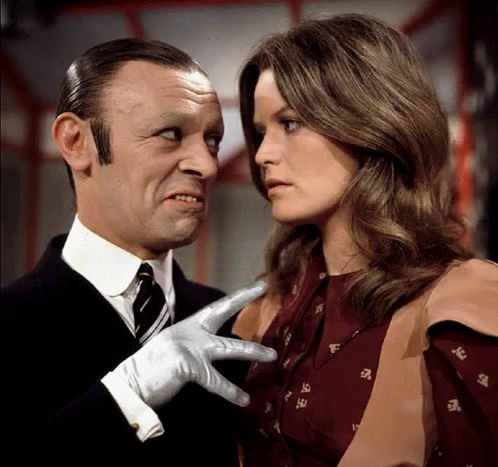 Here's how Rob introduced Mr. Stabs to his international audience:

There can't be many TV characters that have managed to endure for 15 years, on and off. There must be even fewer still who were villains and played by different actors. Even fewer of them must have appeared in children's TV shows and been set up for their own spin-off series. And even fewer have had children imitating them in playgrounds.But to do all of that and to appear in no fewer than three unrelated TV shows? That surely must be unique.So spare a thought for Estabes, an immortal member of 'the Brotherhood', servant of Beelzebub and prodigious user of 'hand magic', for his journey is indeed both unique and fascinating. 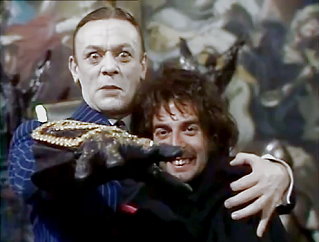 From Wikipedia:
Mr. Stabs, played by Russell Hunter, is defeated by Ace of Wands's lead Tarot, yet returns, again played by Hunter, in an episode of the anthology series Shadows. The character's final appearance was in Dramarama, this time portrayed by David Jason. However, the Dramarama story was a prequel to the previous ones.

'Ace Of Wands'
Mr. Stabs was introduced in this series sophomore season premiere, "Seven Serpents, Sulphur And Salt".  Unfortunately, ITV wiped away all copies of the first two seasons of 'Ace Of Wands'.  So there's no way to see Russell Hunter playing the role. 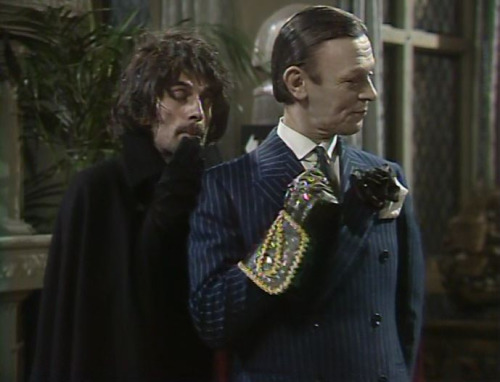 'Shadows'"Dutch Schlitz' Shoes"
Russell Hunter returned to the role of Mr. Stabs for this story in which he was possessed by the ghost of Dutch Schlitz after he put on the dead gangster's shoes.  (I would not be surprised if Warehouse 13 finally gained possession of those shoes.)

'Dramarama'"Stabs"
This actually serves as a prequel to Estabse's first episode on television.  Hunter wasn't playing the role this time out, but that's okay within the reality of Toobworld.  Being a magical immortal, Estabse had the power to transform his image to the world around him, much like "demi-gods" Zeus and Thor.  It's a power used by witches and genies on human test cases like Gladys Kravitz, Darrin Stephens, and Major Tony Nelson.

Besides he was now played by David Jason and that ain't too shabby.


For the full story on Mr. Stabs by Rob Buckley, click here.

Welcome to the horror section of the Hall of Fame, Mr. Stabs.

THE MARTIANS OF TOOBWORLD

Seventy-seven years ago today, "Mercury Theatre On The Air" broadcast their version of H.G. Wells' "The War Of The Worlds".  The radio broadcast caused widespread panic in the country and it happened as well in Toobworld as well - as seen in episodes of 'Touched By An Angel', 'War Of The Worlds', 'Studio One', and in the TV movie "The Night That Panicked America".

Martians do exist in Toobworld, but with the independence of television produtions, they vary in appearance.  This can be splained away by several reasons - some of these races may be invaders from other planets using Mars as a base before launching their attacks on Earth Prime-Time.  The true Martians must have eventually overwhelmed their invaders before they could successfully take over Toobworld.  (And maybe the Doctor helped as well.) 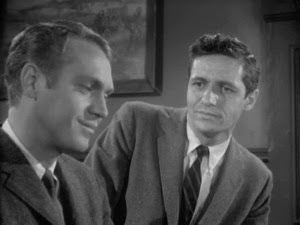 This would be the splainin for the "Martians" as seen in the 'Alfred Hitchcock Presents' episode "Human Interest Story".  They looked human, as the real Martians would in a cursory observation, but that was after they transformed themselves with machinery on Mars.  (It sounds as if they were bird-like in appearance originally, with knees that bent backwards.)

With others, it could be a case of deficiencies in the brand of universal translators used by the aliens.  Since the human mind can't really comprehend a planet they never heard of before, the translator probably uses a term most Earthlings use as a substitute for aliens - "Martians".


The following Martians are the true inhabitants of the Red Planet: 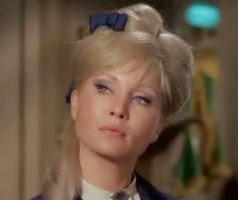 The Martians seen in "People Are Alike All Over" never show their antennae (like Exigius 12½, Phobos One and Deimos do in their respective shows).  And it's the contention of Toobworld Central that Teenya was like Exigius 12½ in being long-lived - in fact, I think she visited Earth Prime-Time back in the 1870s, going by the name of Triste (which translates as sad, mournful).

As for Ross in "Will The Real Martian Please Stand Up?", he doesn't display his antennae either, but he does show off that third arm.  That doesn't disqualify him as being a true TV Martian and for that we can thank the TV version of 'The Hitch-Hiker's Guide To The Galaxy' for (belatedly) setting the precedent with Zaphod Beeblebrox adding not only an extra arm but an extra head as well.  O'Bviously that surgical technique was shared throughout this quadrant of the galaxy.

Then there are these two guys:

I think they were two separate alien scientists who - for whatever reason - were fused into one cyborg body.  But as for them originally being Martians?  I don't think so.  I'm not sure where they are from originally; for alls I know, they could be primitive Vulcan off-shoots.

At any rate, "Uncle Martin O'Hara" will always be the template for a true TV Martian.....

* This was the name used in the short story.  In the credits for the episode, they are known as Martian #1 and Martian #2. 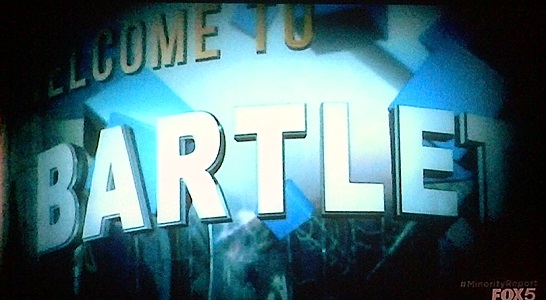 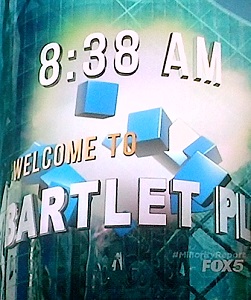 'Minority Report' takes place in Washington, DC, in 2065.  Even though that's fifty years into the future, I don't want to claim that it will be the future of Earth Prime-Time.  I'd like to think that my Inner Toob musings will be "deathless prose" and I'd hate to think that any claims I make about that future, so close in the long run, will run counter to what actually happens in Toobworld by then.  ('Star Trek' and similar shows set so far into the future are fair game.)

So I figured that this show should be situated in one of the Borderlands, a dimension that blends Toobworld with the Cineverse.  But then I saw this image that popped up originally in one of the pre-cog dreams of Dash:

So I've decided the best TV dimension is the one that was created for 'The West Wing'.  The Sorkin show had to be placed on an alternate Toobworld because its President of the United States was different from the ones in Earth Prime and Earth Prime-Time.

And that POTUS for 'The West Wing' was Josiah Bartlet.  So it's believable that this major plaza in the nation's capital would be named after Jed Bartlet.

And this theory is backed up by the show's executive producer:

'The West Wing' and 'Minority Report' aren't the only TV shows in that dimension.  'Mr. Sterling' was an official extension of that world, but there are also a few other theoretical connections.  (One of them is 'Smallville' - because things would have been different if Superman had already made his debut as an active superhero.) 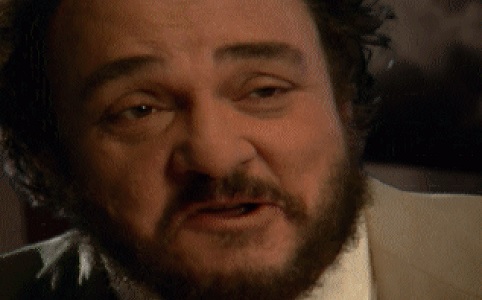 Harry Mordecai was the titan behind a media empire based in San Francisco (even though he was from the United Kingdom.)  Back in 1994, he was the publisher of the newspaper the San Francisco Union, which he sold soon after the paper was embroiled in a murder investigation.

Harry Mordecai:I think "The Launch Pad Murders" would make a first-class mini-series, starring that -# I'll get back to you, Harry - Yeah, that tall actor.

The murder of the paper's advice columnist happened in 1994.  So the actor in question would have to have been popular enough to helm a mini-series around that time.  And I'm only going to consider the fictional characters of Toobworld, not even the televersions of celebrities from that time. 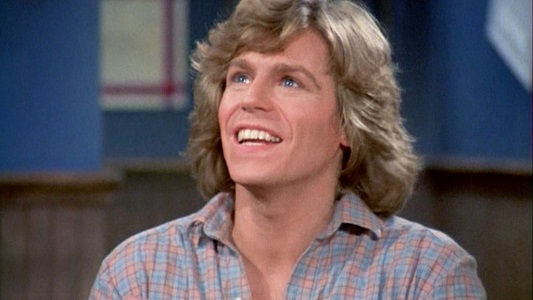 The classic sitcom went off the air in 1983.  In that following decade, Bobby could have graduated from struggling actor to successful star.  And he could have been the target for Mordecai's dreams for the "Launch Pad Murders" mini-series.

Reflecting events in the real world, I think Bobby Wheeler is no longer alive in Toobworld.  It would be nice to think that he was at the top of his game when he exited stage left..... 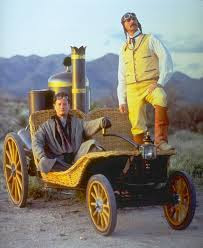 
Mill Creek Entertainment has exclusively informed us today that Legend - The Complete Series will be available on home video for the first time ever on January 5, 2016, with a 2-DVD set priced at just $14.98 SRP! It will include all 12 episodes, including the 2-hour pilot. The program may not have lasted long, but this show - which was one of those that launched UPN's inaugural season in 1995 - has left long-lasting impressions on its many fans, and we're sure they'll be glad to get it at long last!

You can read the full story here.

Aside from being a TV Western that fell into my favorite category (off-beat like 'Maverick', 'Alias Smith And Jones', but especially 'The Wild Wild West'), I need to see a particular episode again to verify my usually faulty memory.  I think I can connect this series to 'Barbary Coast'.

But also it was a fun look at certain historical events from 1876, including the historical figures of that time.

"She has convinced Donna that while her attorney is terribly earnest,
he's terribly young and inexperienced.
And in terribly over his head."
Della Street
'Perry Mason'
"The Case Of The Provocative Protege"

This episode took place in November of 1960.  On average, a graduate of law school passes the bar in their state around the age of 25.  So for a lawyer to be "terribly young and inexperienced", we need a lawyer who only just recently got their license to practice law.  And if they are 25 years of age, they should have been born in 1935. 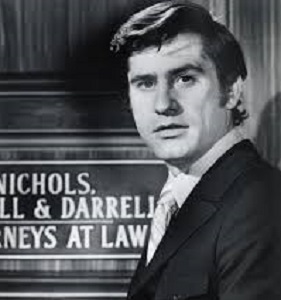 Now, we also would want a TV lawyer in California who was "terribly earnest".  I can think of only one lawyer in Los Angeles who showed such determination in seeing justice done and who would still have been of the right age......

Neil Darrell, future partner at Nichols, Darrell, & Darrell.
('The Bold Ones: The Lawyers')

Usually I claim that a TV character is the exact same age as the actor playing him, unless otherwise stated.  But as James Farentino was born in 1938, I'd rather not go the 'Doogie Howser' route and claim that Neil became a lawyer when he was 22 years old.  So I'll just fudge his age by three years since I can't remember it being mentioned in the show.

It would be eight years before we finally saw Neil Darrell on our screens as part of the cast for 'The Bold Ones: The Lawyers'.  Those missing years on the Toobword timeline need to be filled in, however - no one ceases to exist just because they're not on the small screen.  Being a crossover fan, I think Neil went to work for MacKenzie-Brackman, and may have even clerked for Supreme Court Justice Henry Hoskins.

This is what I love most about the Toobworld Dynamic: filling in the blanks to make the TV Universe more cohesive.