For our January inductee into the TV Crossover Hall of Fame, we needed someone of classic status to adhere to the traditions of the hall. And no one was better suited to kick off the British invasion of 2015 than the man who inspired one of America's top TV icons. 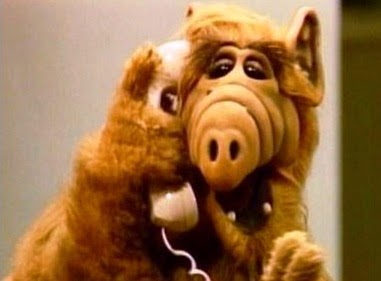 No, not that one, you stupid git! 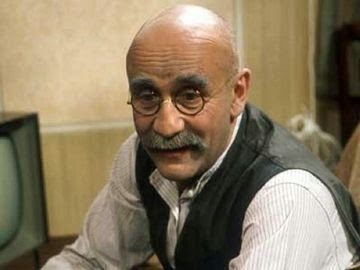 'Comedy Playhouse'
- "Till Death Us Do Part" (1965)
As played by Warren Mitchell, this bigoted, racist, homophobic London dockworker first saw the light of day in 1965 in an episode of the anthology TV series 'Comedy Playhouse'. However, this episode has been relegated to Prequel Toobworld because the family name was not Garnett but Ramsey.

Alfred Edward Garnett was reactionary, mean-spirited, selfish, bigoted, anti-Irish, anti-Catholic, racist, misogynistic and anti-Semitic. Warren Mitchell himself is in fact Jewish. In 'In Sickness and in Health' he also displays homophobia, largely because he gets a gay black man whom he calls "Marigold" as his home help.

In comparison to other British TV shows - except for your prime-time soap operas - Alf Garnett racked up quite a few episodes over the course of several series:

"The Alf Garnett Saga" (1972)
The Garnett family proved to be so popular that they crossed over to the Cineverse. These movies have been absorbed into Earth Prime-Time. Any possible recastaways that differentiate the movie from the various TV series can probably be splained away with the usual excuses.

The following appearances by Warren Mitchell as Alf Garnett would be his Skitlandian doppelganger, making him multi-dimensional.


Norman Lear bought the rights to the characters and the premise and adapted Alf to become Archie Bunker of 'All In The Family'. 'All in The Family' went on to become the defining sitcom of the 1970s and the cornerstone of the TV Universe with several spin-offs, sequels, and spin-offs from spin-offs!

Welcome to the Hall of Fame, Chairman Alf. I hope you find it to your liking, but if not? I'm sure you won't be shy about telling us.

(Wait til he finds out who's getting inducted next month and who will be forever  positioned next to him in the portrait gallery!) 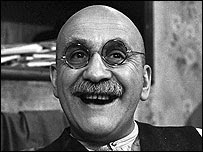 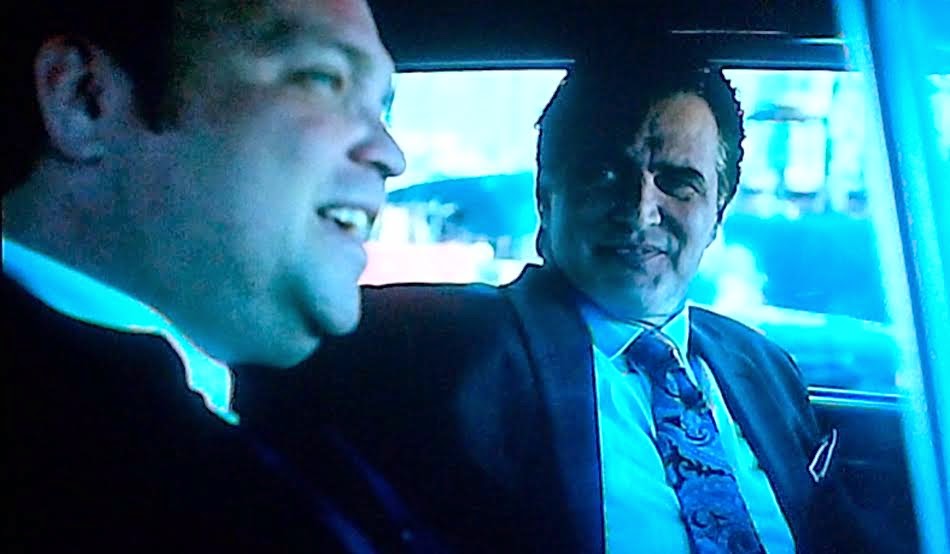 ﻿
When 'Gotham' came back from its holiday break, the show came so close to making a theoretical connection to 'The Sopranos'.  And even the fact that they are in two separate Toobworlds - Earth Prime-Time for 'The Sopranos' and Comic Book Toobworld for 'Gotham'.

(Earth Prime-Time already had its own Gotham City, quite a visitors' destination back in the mid-1960s.) 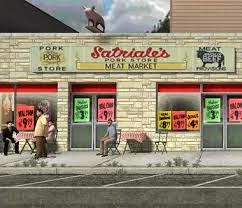 ﻿
But when Butch and another mobster were reminiscing about their childhood together, Butch mentioned the time they hit the Satriani meat market for a truckload of meat.  If only it had been Satriale's Pork Store... then I could have linked 'Gotham' to the meeting place for Tony Soprano and his crew.  Just because 'The Sopranos' took place in the main Toobworld, that doesn't mean they didn't have doppelgangers in Comic Book Toobworld.

Labels: Alternateevee, By Any Other Name, Location Shot, Missing Links 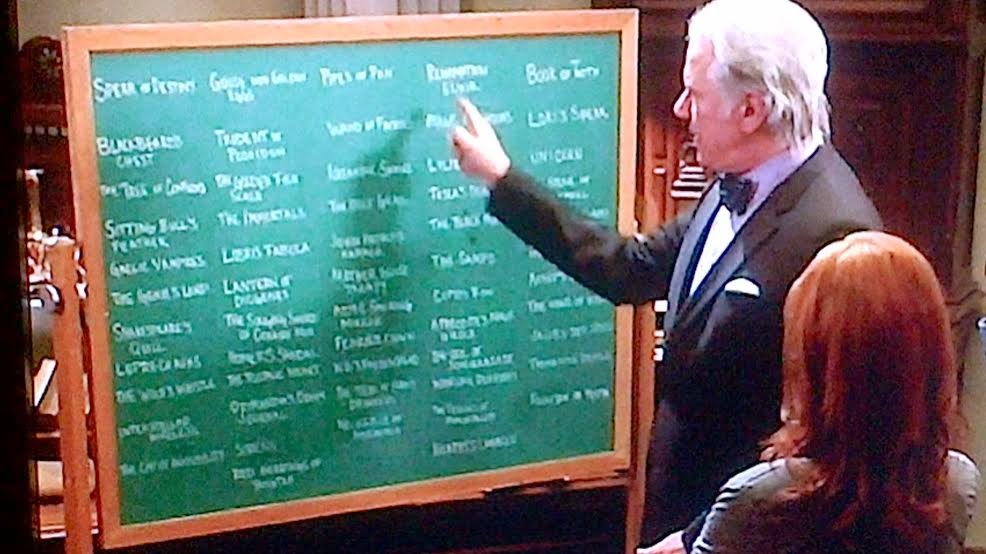 From Kiersten Hallie Krum of Entertainment Weekly re: 'The Librarians' - "And The Fables Of Doom"

Finally, Because I had to know, here in no particular order is the list on Jenkins’ chalkboard. My personal favorite is Jacob’s Step Ladder.

*This is my best guess as it’s the only one I couldn’t definitively make out. Would it have killed director Jonathan Frakes to have one camera pan in which the chalkboard was fully legible?!

Jenkins had listed fifty-seven magical/supernatural items which could have been responsible for bringing fairy tales to life in the small Washington village of Bremen. Among those listed above, several of them could be links to other TV show episodes.

Spear of Destiny
"The Librarian: Quest For The Spear"
This was already in the possession of the Metropolitan Museum, not that it would do the Librarians any good - the Library is currently lost in a pocket dimension.

The Immortals
'Hercules: The Legendary Journeys'

The Genie’s Lamp
'I Dream Of Jeannie'
Although she was housed in an ornate bottle, many genies do reside in lamps.

Tazmanian Devil
Geico Commerical
He crossed over from the Tooniverse and was making a commercial in a TV studio......
The Lantern Of Diogenes
'Warehouse 13' - Unknown
Many of the other items are probably already stored away in 'Warehouse 13' as well.....
BCnU!


On January 1st, the first winner of a 2015 Toobits Award was established with the death of DCI Emma Summerhayes on 'EastEnders'.  She had been investigating the death of Lucy Beale and with the long list of suspects there in Watford Square, Emma was able to narrow it down to the guilty party.  She called them up and let them know that she knew their secret.  But shortly after that she was hit by an out of control car driven by two other neighborhood residents.

And so Emma Summerhayes won the hardly desired "First Toobworld Death of 2015".

Twitterlings had fun with the image of Emma on her phone talking to Lucy's killer, and they came up with several suggestions for suspects outside the boundaries of 'EastEnders'.  Here are just three of them..... 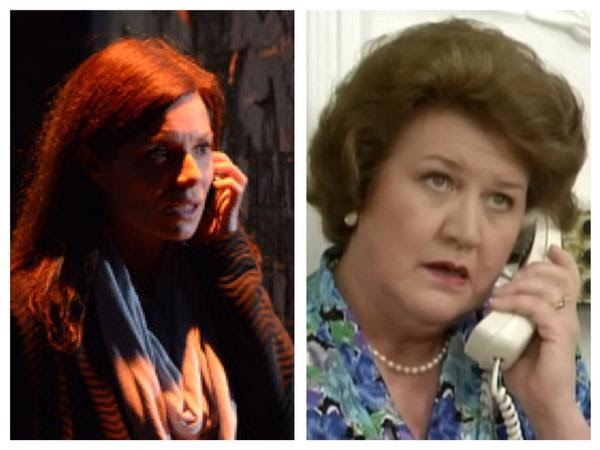 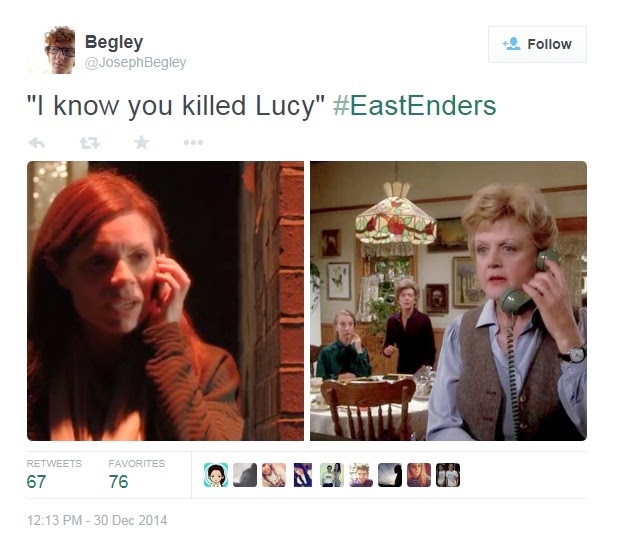 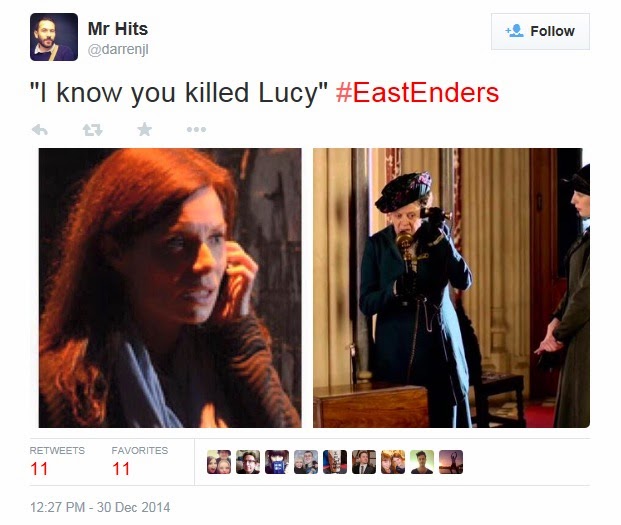 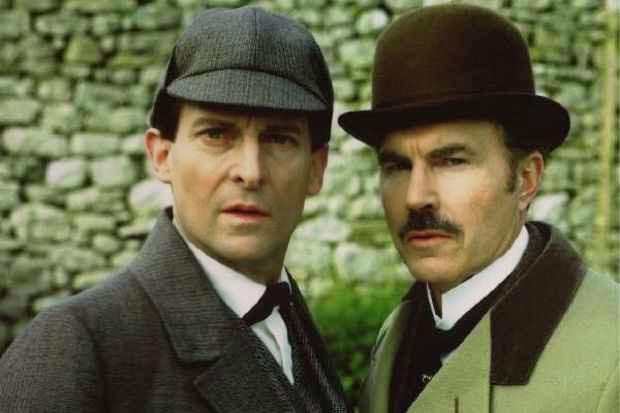 For many involved in the study of Sherlockiana, today marks the anniversary of Sherlock Holmes' birth.


One would think I should focus on the televersion of the Great Man himself on his birthday. But instead, I want to draw attention to an event in the life of Holmes' Boswell, Dr. John H. Watson, and how it can be theoretically connected to background events in another history mystery.

"You have been in Afghanistan, I perceive."
Sherlock Holmes
"A Study In Scarlet"

Dr. Watson served as a battle surgeon during Britain's second Afghan war, from 1878 to 1880.  He was wounded at the Battle of Maiwand and was shipped back on the troopship Orontes.

There had to be thousands of British troops in Afghanistan during that conflict, and the chances for Watson to have met one particular soldier would have been slim to none.  Yet in Toobworld the coincidence had a better chance of happening.

Bat Masterson: [watching a belly-dancer] I don't think I've seen a dance quite like it.
Inspector Thomas Brackenreid: Reminds me of Afghanistan. Never thought I'd see it here, but I can't say that I mind.
'The Murdoch Mysteries'
"Glory Days" 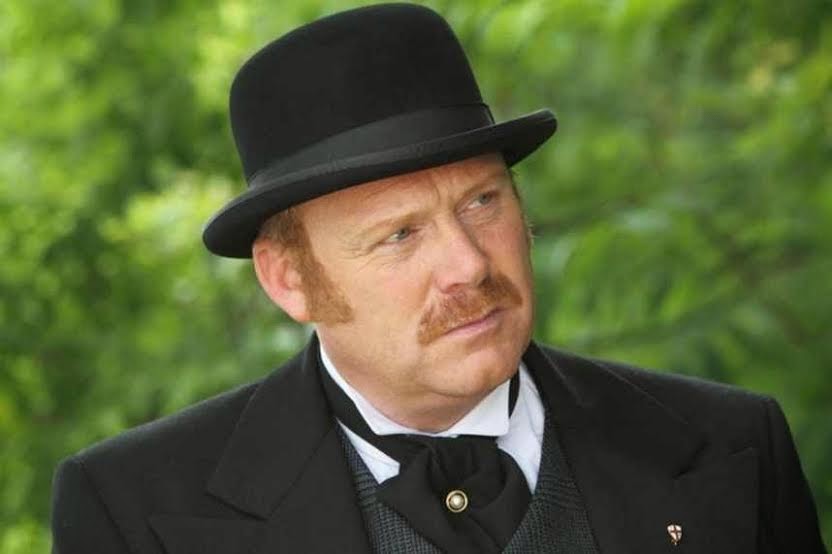 While he was still a resident of England (originally from Doncaster in the south of Yorkshire), Thomas Brackenreid served Queen and Country during that same war.  It's pozz'ble, just pozz'ble, that his path crossed with that of Watson's.

There is a Zonk to this theory but we have a splainin for that.

In 'The Murdoch Mysteries', Sir Arthur Conan Doyle has been a visitor several times to Toronto's Constabulary station #4 where Thomas Brackenreid is the Inspector.  In the episode, indeed, in the real world in general, Conan Doyle is looked upon as the creator of Sherlock Holmes and as the writer of the stories, not Dr. Watson.

But ardent believers in the world of Holmes and Watson consider Conan Doyle to have been the literary agent and editor for Dr. Watson. So when Conan Doyle gave serious consideration to Inspector Brackenreid's suggestion that "The Hound Of The Baskervilles" should climax on the moors rather than at the edge of a cliff, it could just as easily have been an example of Sir Arthur as an editor rather than as the writer.

I'll take it a step further:  for Toobworld purposes, Conan Doyle was a founding member (with the approval of Holmes and Watson) of the shadowy world-wide organization which provides fictional versions of Toobworld citizens in order to provide plausible deniability for their actions.

Anyhoo, that's my tip of the deerstalker to the Toobworld of Sherlock Holmes on his birthday. 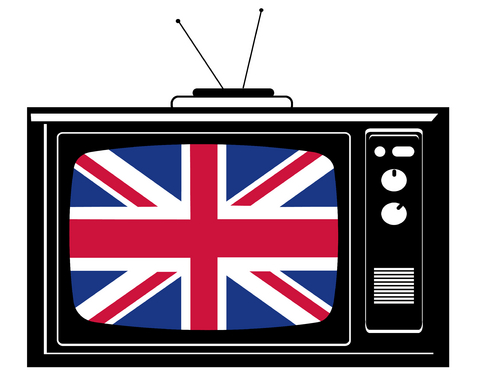 ﻿
Eight hundred years ago this year, King John and his barons signed the Magna Carta.  Drafted by the Archbishop of Canterbury, the document promised the protection of church rights, protection for the barons from illegal imprisonment, access to swift justice and limitations on feudal payments to the Crown, to be implemented through a council of 25 barons.

At least two TV series had episodes that were centered around the signing of the Magna Carta, so there's as good a reason to announce that the theme for this year's inductions into the Television Crossover Hall of Fame will be the "British Invasion".  Every new member will have some connection to British telly while still O'Bserving the monthly traditions (behind the scenes talents for September, Horror for Halloween, something seasonal for Christmas, and even a Western for August!)
Okay, I'll admit it.  I was going to run this theme anyway because there are so many TV characters to choose from, but I may as well have an excuse to do so.....
BCnU!
Posted by Toby O'B at 4:00 AM 0 comments

ECHOES: VIEWS OF THE FUTURE

Amos McCoy:
"It's just plain foolishness,
squattin' all day in front of the little black box,
starin' bleary-eyed at people who ain't more than 2 inches high.
It's a passing fancy, I tell you,
like buggy whips and high button shoes."
'The Real McCoys'


For the first Video Sunday of the new year, I want to share a few variations on the classic "Niagara Falls/Slowly I Turned" comedy routine.

From Wikipedia:
"Slowly I Turned" is the most common name associated with a popular vaudeville sketch that has also been performed in cinema and on television. Comedians Harry Steppe, Joey Faye, and Samuel Goldman each laid claim to this routine, also referred to as "The Stranger with a Kind Face" by clowns and clowning aficionados, "Niagara Falls" by fans of The Three Stooges and Abbott and Costello, "Pokomoko", "Bagel Street", and "Martha" by the fans of 'I Love Lucy'. 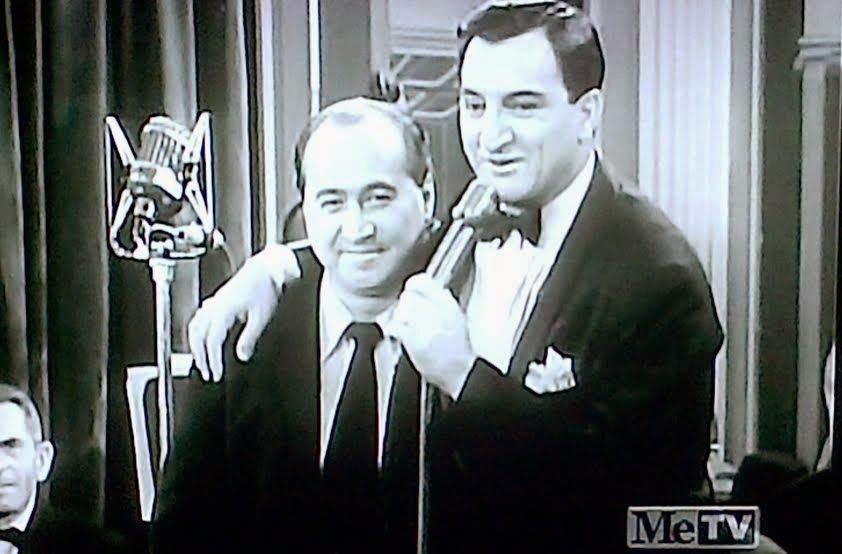 Joey Faye (12 July 1909 – 26 April 1997) was a comedian and actor who was born Joseph Antony Palladino in New York City. He gained fame as a comic in vaudeville and claimed he created two of vaudeville's more renowned pieces of business, "Floogle Street" (a.k.a. "Susquehana Hat Company" on YouTube) and "Slowly I Turned".


In Toobworld, Joey Faye is known as "Doodles" Faye and he is accepted as the creator of the routine.  This was established in the "Good Old Burlesque" episode of 'Make Room For Daddy, in which Faye played himself.


So there's the story of the routine; at least in Toobworld, it's official.  Now here are some other versions of "Slowly I Turned":
And just for bleeps and giggles:
BCnU!
Posted by Toby O'B at 1:50 AM 0 comments