For our last inductee in our salute to “the business”, we’re paying tribute again to the actor Roger Moore., who passed away over two years ago. 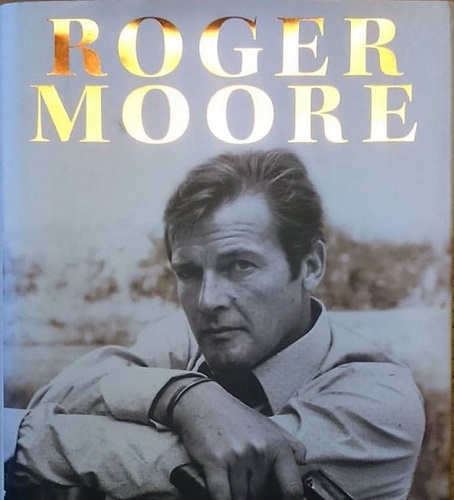 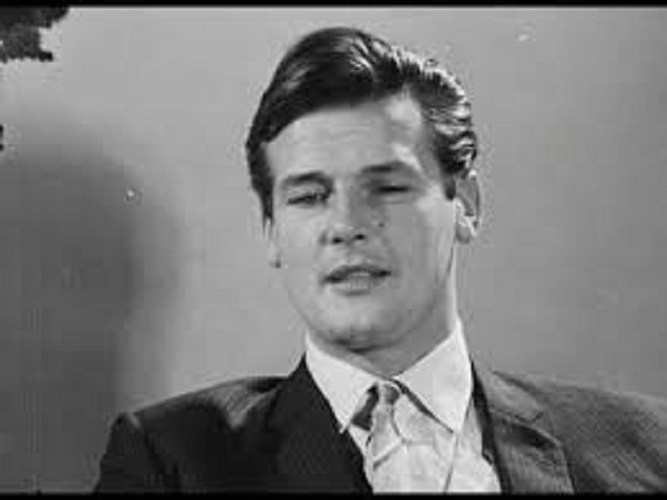 Prior to Bond, he played the main character, Simon Templar, in the British television series ‘The Saint’ from 1962 to 1969 and had significant roles in some American television shows and films in the late 1950s and early 1960s, including replacing James Garner and portraying Beau Maverick in the ‘Maverick’ series in 1960 to 61. Moore starred with Tony Curtis in “The Persuaders” television series in 1971 to 1972, and had roles in numerous theatrical films in the 1970s and 1980s. 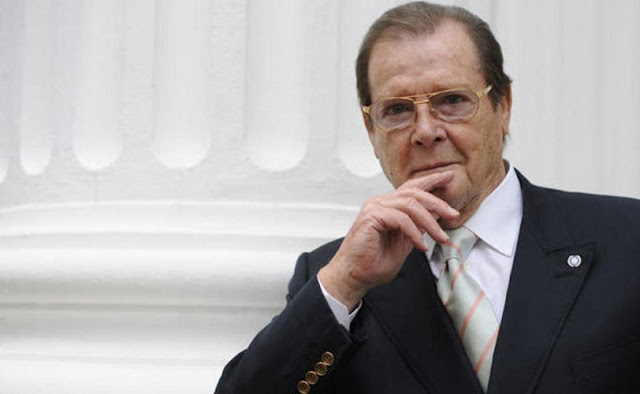 Moore was appointed a UNICEF Goodwill Ambassador in 1991 and was knighted by Queen Elizabeth II in 2003 for services to charity. In 2007, he received a star on the Hollywood Walk of Fame for his work in television and film. In 2008, the French government appointed him a Commander of the Ordre des Arts et des Lettres. 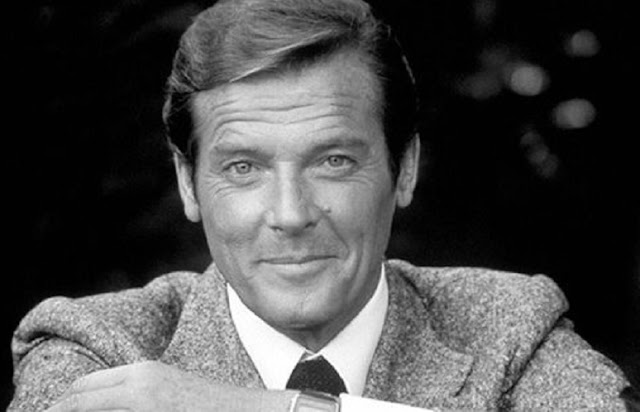 There are a lot of actors who play themselves in various TV shows, some of them even made a living from it, like George Burns and Milton Berle.  But I usually reserve them for inductions on special occasions, or during March when I’m trying to adhere to a regular theme of the League of Themselves.

But I thought Sir Roger worked for this theme since his presence as himself in Toobworld helps stave off any temptation on my part to bring the James Bond movies into the world of Toob.

There was one true Agent 007 in Toobworld and sorry, purists, he was an American who was addressed as “Jimmy Bond”.  (Barry Nelson in “Casino Royale”.)

As to all those incarnations on the Big Screen and how they could all still be the same man (as suggested in one of the later Daniel Craig movies?  Regeneration?  Multiverse?  Each of them just took on the name of “Bond.  James Bond” as an alias?  That’s some other dimensional devotee’s problem.

All I really had to do was concern myself with the appearances of those Bonds in various TV commercials.  (My take – Okay, each Bond seen in the movies are fictional and financed by the UNReel shadow ops.  This includes the commercials – and even Roger Moore’s appearance on a variety program nearly ten years before he assumed the role – which were all geared to duping the public into thinking that James Bond was fictional.  If James Bond is still active in Toobworld, he must be a new agent using the name as an alias and we have no clue what he must look like.

So Moore, Roger Moore, serves as the prime example that all the references to James Bond in other TV shows are to just the movies, not the man.

Here are the appearances which qualify Roger Moore to be inducted into the Television Crossover Hall Of Fame.
:
77 Sunset Strip
- Tiger by the Tail (1961) 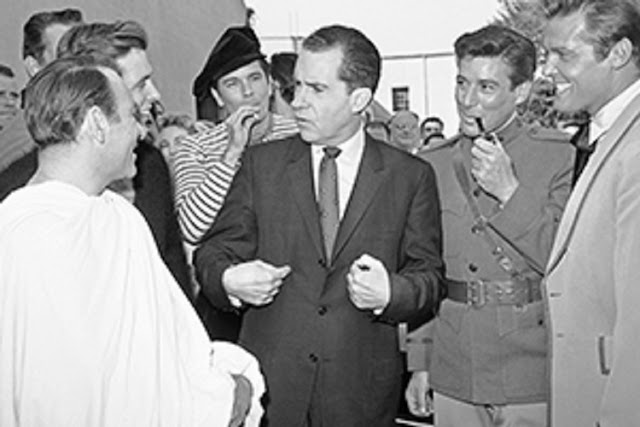 O’Bservation:   "On October 12, 1960, weeks before the election, Vice President Richard Nixon stopped by the studio to film some campaign spots. He popped in to the filming of '77 Sunset Strip', where he met with Byrnes, Zimbalist… and guest star Roger Moore (far right)."
[Thanks to ME-TV] 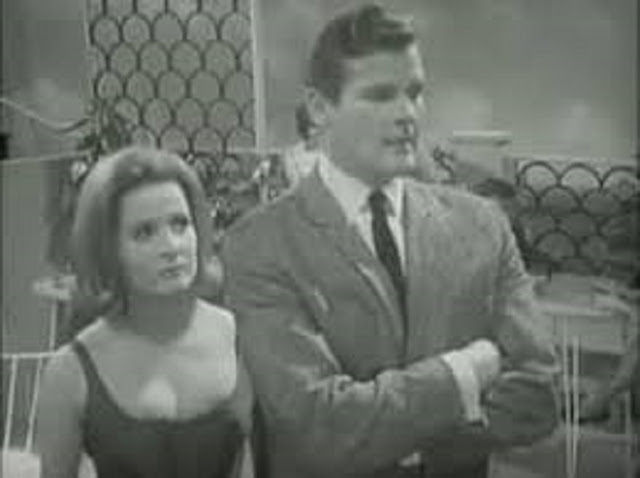 O'Bservation: I could have included a lot of talk shows and variety shows, but those aren't strong enough to count for inclusion.  I have included three however because they do tie in to my reality for Toobworld.  The next two are O'Bvious but in this one (as mentioned elsewhere), Moore is seen playing James Bond in a sketch, almost a decade before he actually played the role.  With this sketch, he established himself for UNReel consideration to be their next choice to play 007 in the movies in order to maintain the false premise that Bond is fictional in Toobworld.

O'Bservation: Why this should be included is O'Bvious - In Toobworld, puppets are alive. 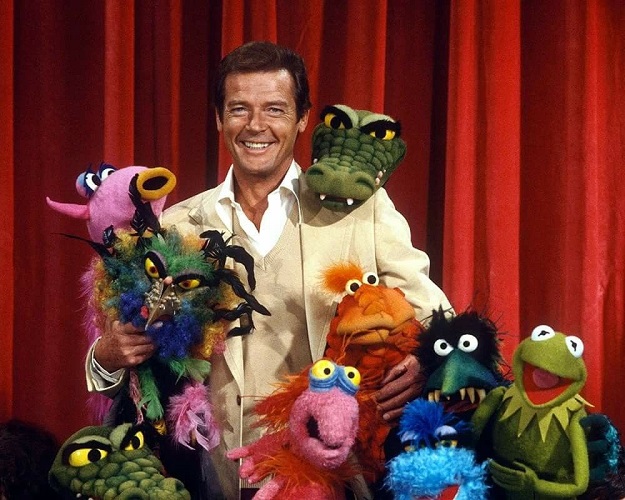 O'Bservation:  Like the Muppets, Dame Edna is a fictional character who doesn't really exist in the real world.  This verifies our inductee to be a "televersion", not the real Roger. 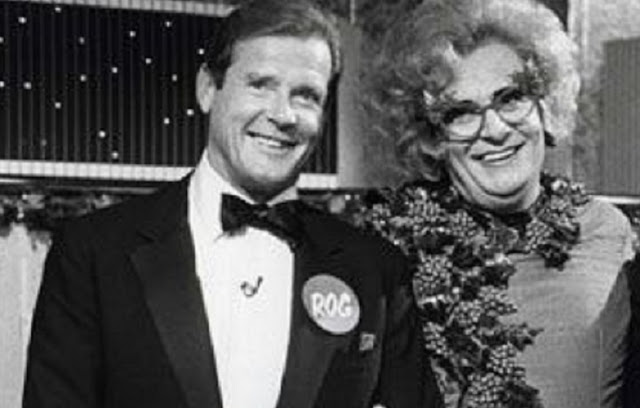 O’Bservation: Moore is only listed as “Celebrity Actor” in this episode, but who else could he be? 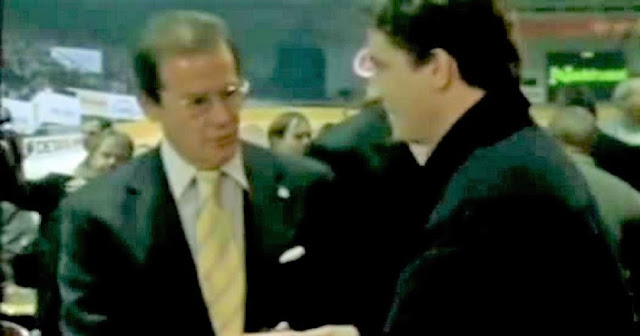 O’Bservation: I don’t see why this movie can’t be absorbed into the TV Universe since nothing about it really wouldn’t conflict with the overall reality of Toobworld.

Welcome to the Hall, Sir Roger!