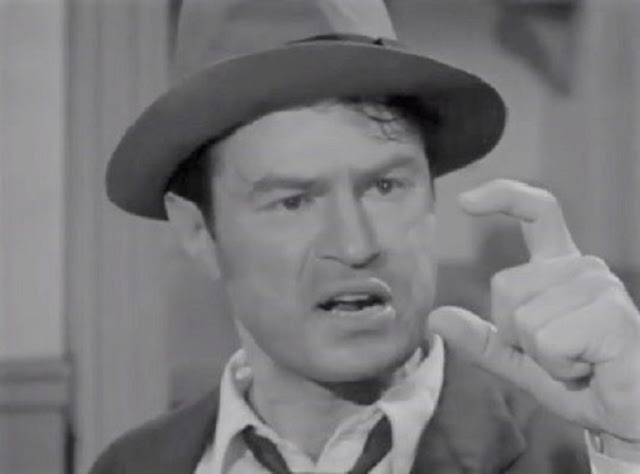 Last August, the Television Crossover Hall of Fame inducted Corporal Randolph Agarn of ‘F Troop’ and his amazingly powerful DNA which accounted for not only his identical relatives in that series but for all of the other characters played by Larry Storch in the main Toobworld.

Mr. Storch’s birthday was two days ago – he turned 97!  So in honor of his birthday, we’re inducting another of his TV characters into the TVXOHOF, someone whom Toobworld Central considers to be part of the Agarn family tree.

This is what I wrote during that “ceremony” for Corporal Agarn:

Not only am I considering Charlie for the Agarn family tree, but he’ll also be a Friday Hall of Famer in January of 2020 when we celebrate the Classics. 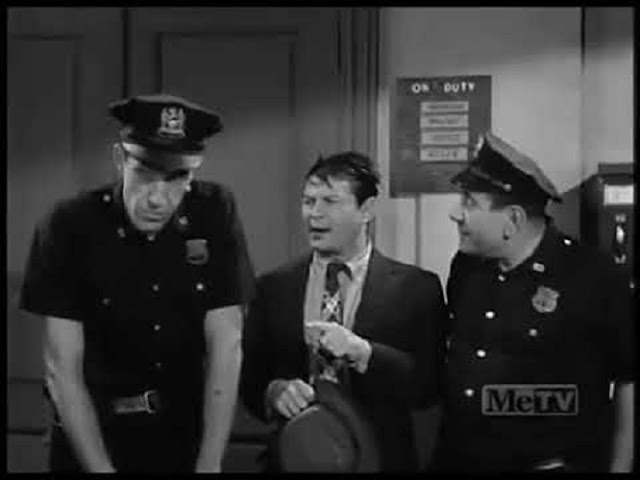 “Charlie” should be well-known to the visitors of a certain police station in the Bronx…. 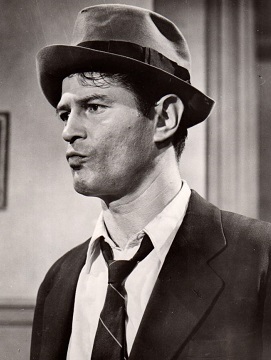 In my theory of relateeveety, Agarn had gone back to Passaic, New Jersey, and married a hometown girl.  And he probably had daughters, or perhaps even just one daughter who gave Agarn a lot of granddaughters.  They all married and took their husbands’ names, which would be the name of all their sons who resembled their great-grandfather.

So that’s why we never see any other characters from the 1960s to the 1990s who are named Agarn. 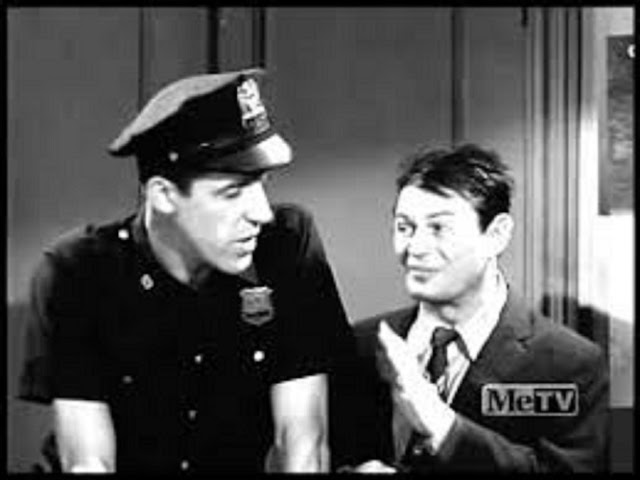 One of these Agarn great-grandchildren would have been born of the union between one of Agarn’s granddaughters and an American of Greek descent by the name of Adamopolis.

I guess it could be said that Life wasn’t kind to Charles Adamopolis.  He eventually became known as “Charlie the Drunk”.  He haunted the precinct house on Tremont Avenue in the Bronx, but eventually he went out West where he would later be found in San Francisco before he drifted down the coast to San Diego.

Here are the TV show appearances which qualify Charlie Adamopolis for membership in the Hall.

Car 54, Where Are You?
That’s Show Business

From the IMDb:
Muldoon's sister Peggy lands a part in the play "Waiting for Wednesday" and the boys of the 53rd Precinct become financial backers before learning that it's a gritty play about police brutality.

From the IMDb:
The boys finally bust a nasty nuisance in the Park - "Pretzel Mary". When they see her deplorable living conditions they replace her furniture - not realizing what they're taking away.

From the IMDb:
The boys of the 53rd Precinct attempt to help rehabilitate chronically drunk Charlie by finding him a job where he won't be tempted to drink, but the officers' regular visits to check up on Charlie have an unnerving effect on his teetotalist coworkers. A Larry Storch tour de force! 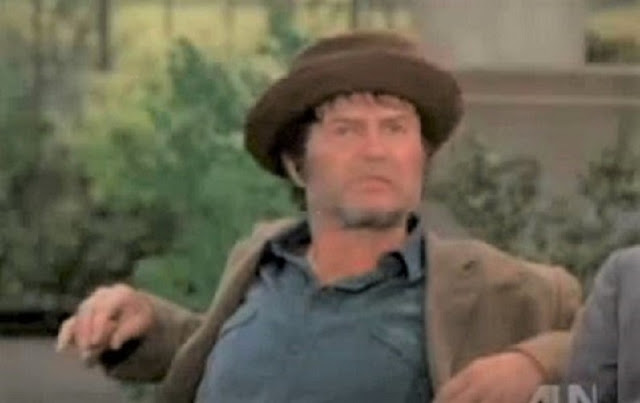 From the IMDb:
Phyllis's bum friend Van has a crush on a higher class woman, Lucille. Phyllis tries to clean him up to make him into a more presentable gentleman.

O’Bservation:
Van ends up giving his new clothes to another bum in exchange for that hobo’s duds.  That other bum would be Charlie. 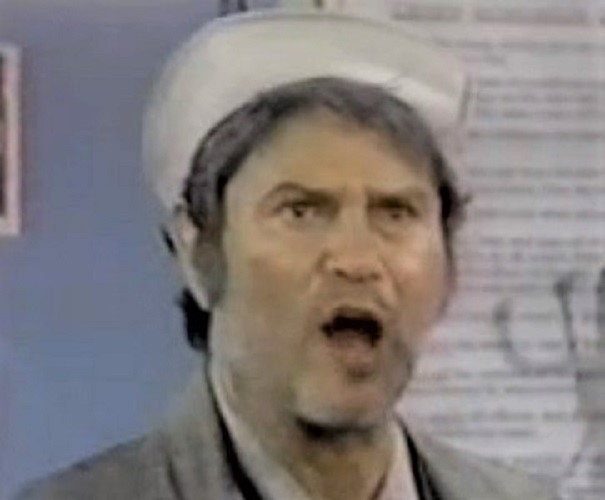 From the IMDb:
When a homeless drunk enters the barracks and makes himself at home, Sharkey is livid. And nothing that the men do dislodges the man from his comfy quarters.

O’Bservation:
You can’t dissuade me from claiming that this bum was Charlie as well.

Here’s what I wrote about those last two episodes when Corporal Agarn was inducted into the Hall:

Neither of these two bums were given names in those two episodes, so I’m going to claim that they are not only the same man, spending time in San Francisco before traveling down the coast to San Diego, but also that he’s actually Charlie Adamopolis who used to haunt the 53rd Precinct in the Bronx.

Welcome to the Hall, Charlie.  Hats off to you…. 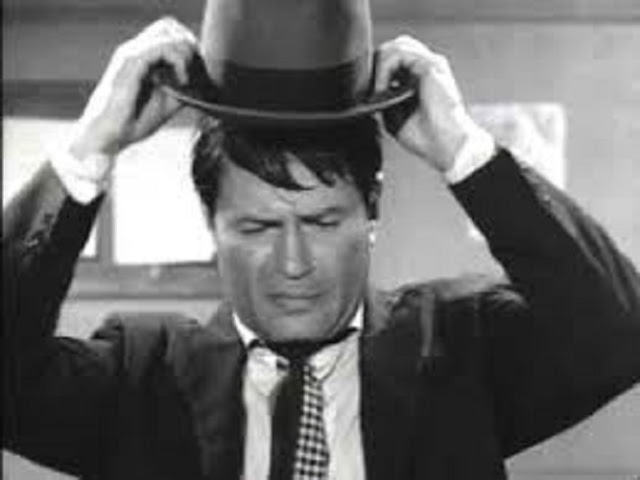 Labels: As Seen On TV, By Any Other Name, Double Vision, Hall of Fame, Life During Prime-Time, Museum Piece, Tele-Folks Directory, Wikipediaphile 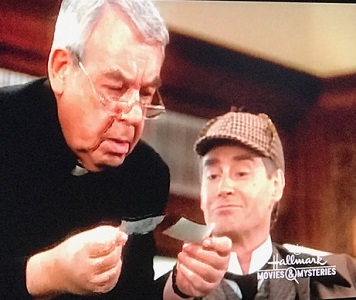 SHERLOCK HOLMES:
I am in fact precisely whom I appear to be - Sherlock Holmes.

SHERLOCK HOLMES:
Yet I am here.

FATHER DOWLING:
How is that impossible?

SHERLOCK HOLMES:
You summoned me.

FATHER DOWLING:
I did?

SHERLOCK HOLMES:
Not perhaps by conscious thought;
yet you sought my counsel as you have so many times before.
But this time there was a difference.

SHERLOCK HOLMES:
You must have heard it said that certain...
fictional characters are so real to their readers that they come alive.

SHERLOCK HOLMES:
Your belief in my deductive methods - and me - made me real.
But yesterday your faith in my methods was shaken.

FATHER DOWLING:
More than that.... Wait a minute!
Are you saying that if I stop believing in you, you'll cease to exist?

SHERLOCK HOLMES:
Precisely.  And that is why I am here:
to help restore your belief in my methods... and me. 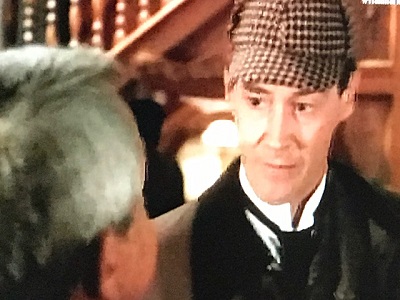 From the wiki for "The Librarians":
Fictionals are a race of magical beings summoned from stories encountered in the second season of the Librarians.

According to Jenkins there are two main types of Fictionals; those that can be summoned by powerful magic and those that come into being of their own accord. The second type are iconic characters whose stories are both well written and well known.

Though rare in the modern day, Jenkins believed there was most likely a small group of Fictionals living in the modern world; their magical existence sustained by the fame and acclaim of their stories. Also, and thankfully, most of them don't cause too much trouble; the Library has also struggled to keep track of them. Flynn commented he had always heard about them but had never actually met one.

Fictionals are bound by their stories, but also empowered by them.

Outside of defeating them in the way their story dictates a Fictional can be destroyed if the specific book they appeared from is destroyed.


This incarnation of Holmes was a fictional, summoned by Father Dowling.  And the priest was the only person who could see him... at first.  But he was fully realized at least as far as Frank Dowling was concerned - to the point that Holmes drove a car with the priest riding shotgun. 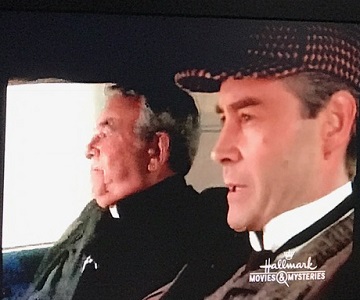 This Holmes was summoned out of a specific book - Father Dowling's copy of "The Adventures Of Sherlock Holmes".

And it's that book as seen in this episode which helps buttress the claim that in Toobworld, Dr. John H. Watson actually did chronicle the cases which Holmes investigated.

Here's how the title page looked in the episode: 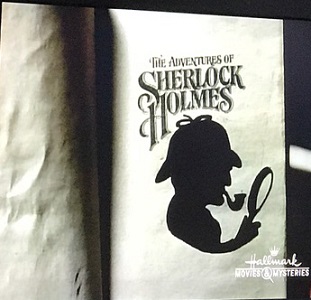 There is no mention of Dr. Watson as the author, true.  But then again, the name of Sir Arthur Conan Doyle isn't seen either.  Doyle wasn't mentioned at all during the case.  If it weren't for the fact that Fictional Holmes' existence was dictated by the boundaries established in the book, I'd say he made a convincing case for Watson to be the true author:

But I'll settle for there being no Zonk in this episode.  Small victories..... 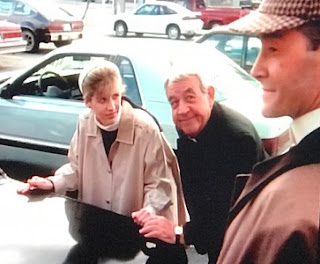