Last year when I was doing weekly inductions into the Television Crossover Hall of Fame, I brought in the televersion of a different real-world show on the last Friday of each month.  We had TV shows from almost every genre – among the 2020 class were  ‘Star Trek’, ‘Hollywood Squares’, ‘I Love Lucy’, ‘Columbo’, ‘Gunsmoke’, ‘The Twilight Zone’, and even the Charlie Brown Christmas special.

This year, I’m using my birthday induction to bring in another worthy inductee…. 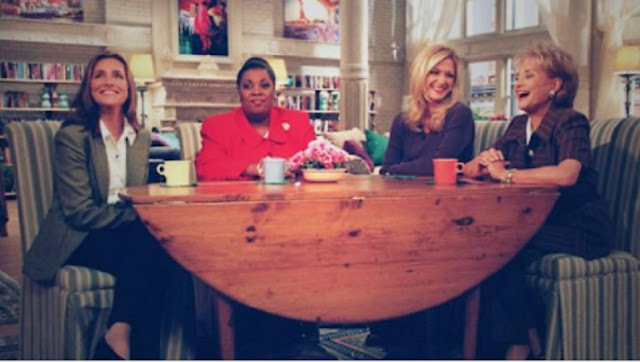 “THE VIEW”
From Wikipedia:
The View is an American talk show created by broadcast journalist Barbara Walters. In its 24th season, the show has aired on ABC as part of the network's daytime programming block since August 11, 1997. It features a multi-generational panel of women, who discuss the day's "Hot Topics", such as sociopolitical and entertainment news. In addition to the conversation segments, the panel also conducts interviews with prominent figures, such as celebrities and politicians. Production of the show was originally held in ABC Television Studio 23 in New York City. In 2014, it relocated to ABC Broadcast Center, also in New York City. For now, the series is broadcast remotely due to the COVID-19 pandemic. 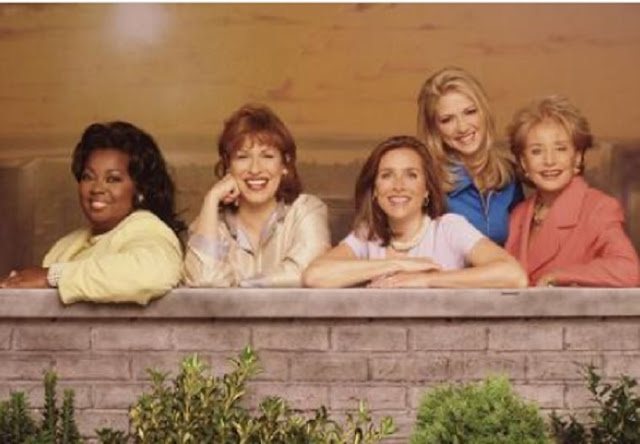 Throughout its run, The View has had 22 permanent co-hosts of varying characteristics and ideologies, with the number of contracted permanent co-hosts ranging between four and eight women per season. The original panel comprised Walters, broadcast journalist Meredith Vieira, lawyer Star Jones, television host Debbie Matenopoulos, and comedian Joy Behar, while the current lineup consists of Behar, entertainer Whoopi Goldberg, lawyer Sunny Hostin, television personality Meghan McCain, and television host Sara Haines. In addition, the show often makes use of male and female guest panelists, including television personality Ana Navarro, who came aboard as a weekly guest co-host in season 22.

'The View' has won 31 Daytime Emmy Awards, including Outstanding Talk Show, Outstanding Informative Talk Show, and Outstanding Talk Show Host. The show has received praise from the Associated Press, Entertainment Weekly, the Los Angeles Times, Slate, as well as The New York Times, which deemed it "the most important political TV show in America". Beginning in its tenth season, the series became subject to on-air controversies and media criticism involving its panel of co-hosts. It was transferred from the helm of ABC's entertainment division to that of ABC News in 2014 following a decline in ratings. Two years later, the series saw viewership growth, averaging 2.5 million viewers by 2020. 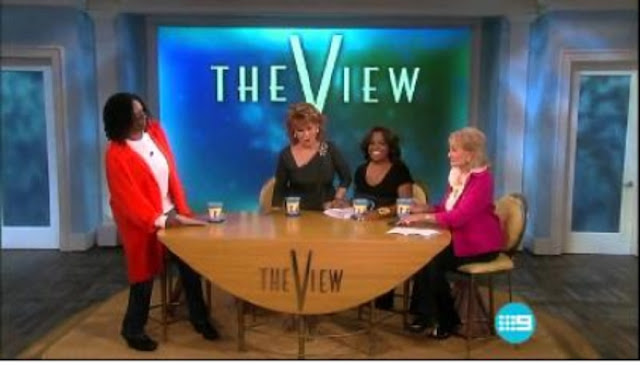 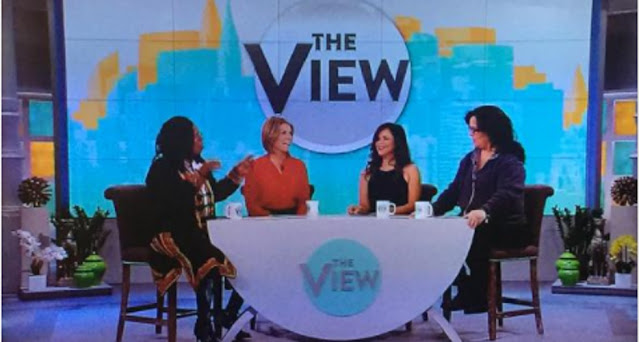 ‘The View’ also gets mentioned/watched in shows which take place in other Toobworlds – ‘The West Wing’, ‘Doom Patrol’, and a couple of shows in the horror world known as “Nosferatoob” – ‘The Vampire Diaries’ and ‘iZombie’.  Plus it has become a cottage industry to be spoofed in Skitlandia (thanks to ‘SNL’ and ‘MAD-TV’) and in the Tooniverse.  (‘Family Guy’ and ‘The Simpsons’ for example.) 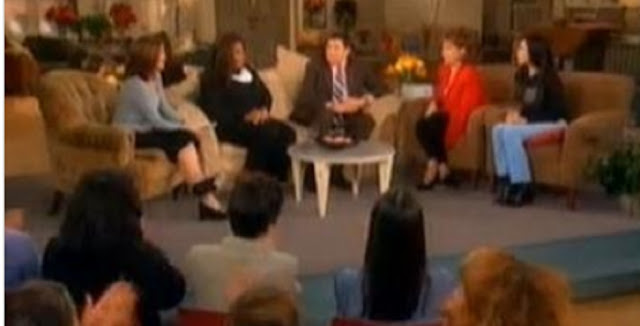 O'Bservation - Seen here is 'The View' as seen in an episode of 'Spin City', which had to be sent to an alternate Toobworld because the televersion of Rudy Giuliani was already the NYC Mayor in Earth Prime-Time... for better or worse. 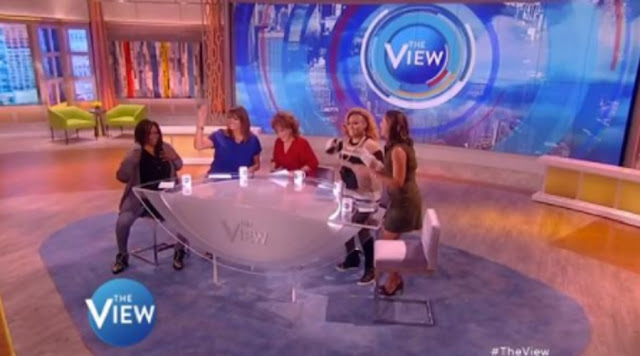 The following shows are all part of Earth Prime-Time and their characters have acknowledged the existence of ‘The View’ as being a TV series in their lives: 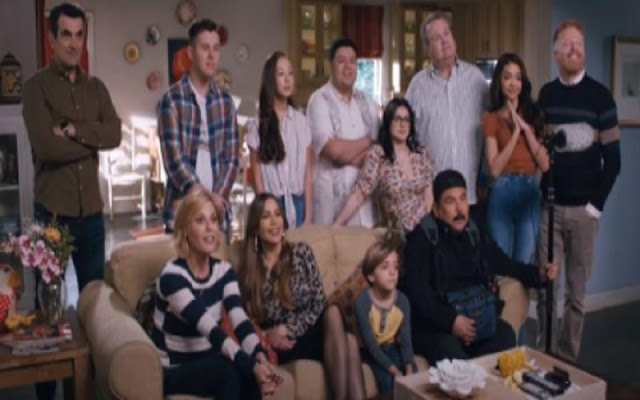 ‘The Mountain’, ‘‘The Nanny’, ‘Gilmore Girls’, ‘Third Rock From The Sun’, ‘Just Shoot Me’, ‘Sabrina the Teenage Witch’, ‘Will & Grace’, ‘Everybody Loves Raymond’, ‘Scrubs’, ‘Reba’, ‘Veronica Mars’, ‘Bones’, ‘Entourage’, ‘Law & Order: SVU’, ’10 Things I Hate About You’, ‘Greek’, ‘Community’, ‘Cougar Town’, ‘Modern Family’, ‘Psych’, ‘Chuck’, ‘The Office’, ‘Drop Dead Diva’, ‘Hot In Cleveland’, ‘Happy Endings’, ‘90210’, ‘Workaholics’, ‘Us & Them’, ‘The Neighbors’, ‘Looking’, ‘Melissa & Joey’, ‘Faking It’, ‘Last Man Standing’, ‘Revenge’, ‘2 Broke Girls’, ‘Justified’, ‘The Jack and Triumph Show’, ‘The Big Bang Theory’, ‘Orange Is The New Black’, ‘’Crazy Ex-Girlfriend’, ‘The Muppets’, ‘Fuller House’, ‘Loosely Exactly Nicole’, ‘NCIS’, ‘The Goldbergs’.
Plus, there are at least three series in which ‘The View’ is not only mentioned, but characters from those shows appear on the talk show and interact with the televersions of the real-life hosts – Jenna Maroney of ’30 Rock’, Casey McCall of ‘SportsNight’, and a fictionalized ‘Bette’ Midler whose life in the eponymous sitcom is very different from that of Trueniverse Bette.  (Sorry about the quality of Bette's pic.  It came from a multi-generation copy on YouTube.) 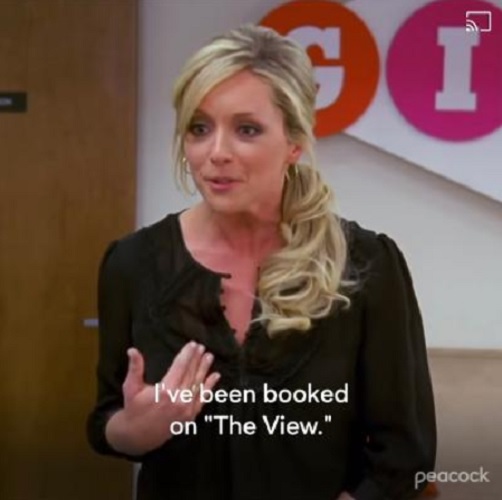 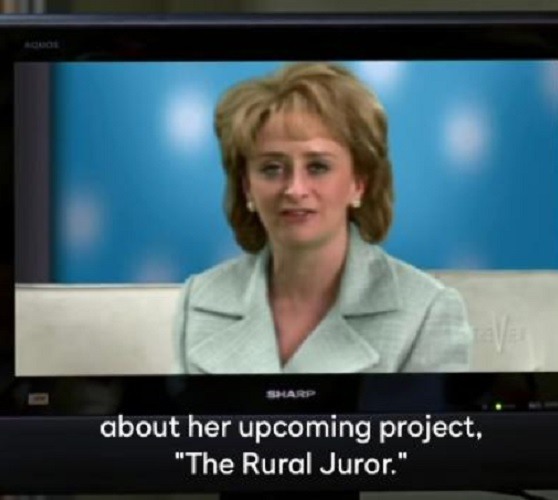 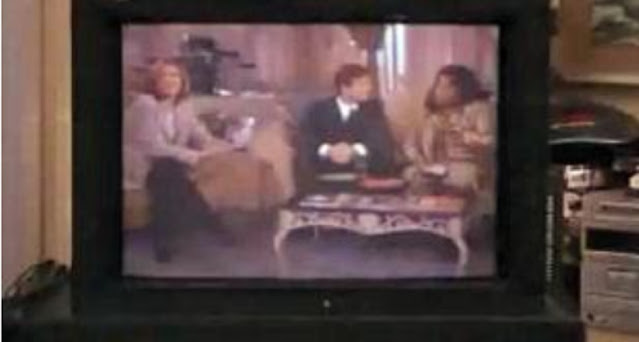 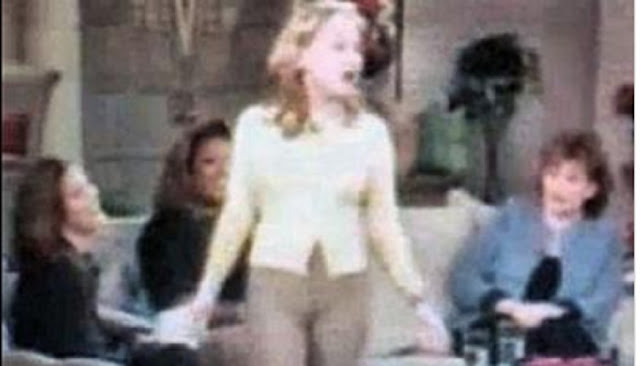 O'Bservation - In that second image from '30 Rock', this was O'Bviously not the true televersion of Barbara Walters.  As to who it was, that has to be determined.  Master of Disguise? Professional Baba Wawa impersonator? Shapeshifter? Android? Alien?  Too bad we can't see if she has bent pinkies....
They may not be the only characters from other shows who will appear on the televersion of ‘The View’; I wouldn’t be surprised if there will be others to come.  Definitely there will be other references to the televised gabfest on other fictional programs in the future.

Welcome to the Hall! 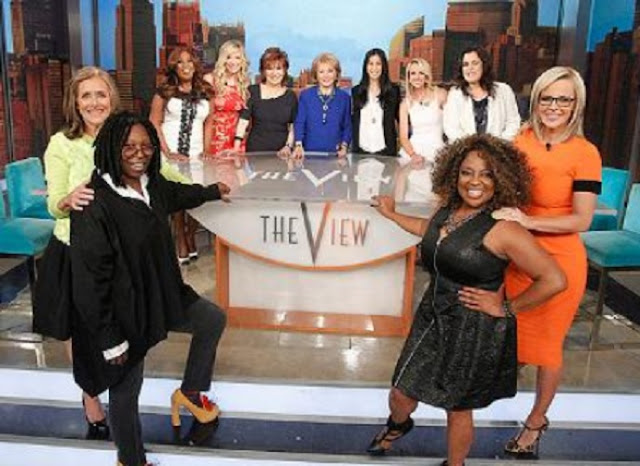