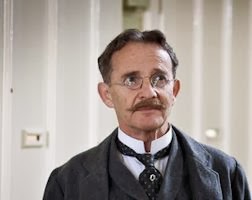 Inspector Reid of 'Ripper Street' was able to save a young woman from being lobotomized by Dr. Karl Crabbe.  He wanted to prevent her from revealing his involvement in an underhanded scheme.  Crabbe ended up in the prison wing of the asylum and eventually served as a Hannibal Lecter to Reid's Clarice Starling.

By 1889, Dr. Crabbe was in the asylum, visited by Inspector Reid in April of 1890.  By that point in his life, Karl Crabbe may have had at least one son to carry on the family name, someone who would have been an adult by then. 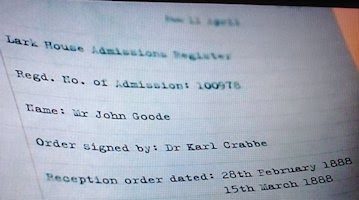 If Dr. Crabbe had more than one son, one of them was the great grandfather of Middleton Chief Inspector Henry Crabbe.  With his wife Margaret, Crabbe was also the proprietor and head chef of the 'Pie In The Sky' restaurant (which he wanted to devote his time to instead of to his police work.) 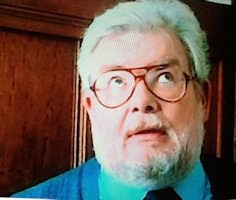 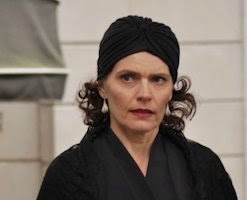 Elsbet Matts was a romance novelist living in Skoga, Sweden, during the 1950s.  The only book of hers mentioned was "Their Last Summer" (That was the English translation.  In Sweden it was titled "Deras Forra Sommaren".)  Her books were usually dark romances about poor women falling in love with older men and they were not well-received by the critics.

"Elsbet Matts" was just her nom de plume.  Her name was actually Elisabet Mattson and her brother was Yngve Mattson who sold components for conveyor belts.

Because of a brief affair with Colonel Holt, Elisabet became pregnant.  She put the child up for adoption and Colonel Holt and his wife adopted him, naming him Thomas Holt.

As to possibilities of fictional books in other TV shows being works by Elsbet Matts, most of those to be found in the list at Wikipedia were either not in the same category as romance novels or attributed to other writers.  But there was one possibility:

"The Long Journey Home" which Beans had overdue from the local library.  Perhaps when he checked it out, he had no clue that it was a romance novel. 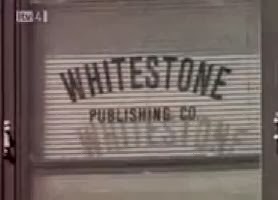 However, after finding herself involved in a double murder investigation in which the son she gave up for adoption died, I think Elisabet Mattson adopted a new guise as "Dame Margot Woodhouse".  Under that name she wrote a series of murder mysteries which were then translated into English for her American publishers, Whitestone Publishing.  Forty years on, near the end of her career, it was apparent that her talents were fading, based just on the title of her last book: "Death Rinses Out A Few Things".

"Dagger Of The Mind" 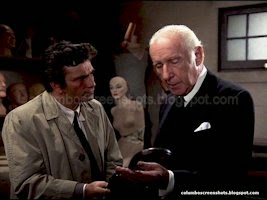 When visiting police official Lt. Columbo expressed an interest in the late Sir Roger Haversham's umbrella, his butler Tanner gave the briefest history of it - that it had been a gift from Lady Astor.  Looking over the umbrella, Tanner pointed out the engraving, which by that point was quite faded and worn down with age.  And of course, the material of the umbrella had been replaced many times over.

From Wikipedia:Nancy Witcher Langhorne Astor, CH (19 May 1879 — 2 May 1964) was an American-born socialite who made a second marriage to Waldorf Astor as a young woman in England. [Her first husband was an American, Robert Gould Shaw II, and they divorced.]

After Waldorf Astor succeeded to the peerage and entered the House of Lords, she entered politics, in 1919 winning his former seat and becoming the first woman to sit as a Member of Parliament (MP) in the House of Commons. She served in Parliament as a representative of the Tory Party from Plymouth district until 1945, when she was persuaded to step down.


Astor's friendship with George Bernard Shaw helped her through some of her personal problems, but his own nonconformity created problems. They held opposing political views and had very different temperaments. However, his own tendency to make controversial statements or put her into awkward situations proved to be a drawback for her political career.
Click here for more about Lady Astor.

(Personally, after reading about her in Wikipedia, I found her to be a hateful person.) 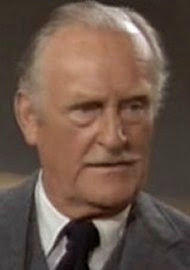 Sir Roger Haversham must have met Lady Astor through his own friendship with the playwright Shaw.  Sir Roger may not have owned his own theatre at the time, but was already making a name for himself as a producer of theatrical presentations.

Since so many historical figures are portrayed by different actors in both, I'm loath to consider either one for official inclusion into Earth Prime-Time.  However, when Sir Roger knew Lady Astor, she probably resembled Marcella Markham at that age..... 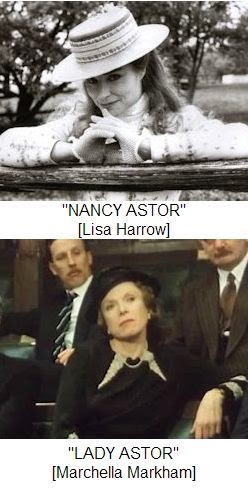 
'Seinfeld' made its debut twenty-five years ago.

I'll give you a minute to absorb that.

When 'Seinfeld' started out, it took a little while for it to find its sea legs.  But I think once the show recast the role of Frank Costanza, swapping out John Randolph for Jerry Stiller, it was firing on all cylinders.

'Mulaney' has the basic blueprint of 'Seinfeld' - a stand-up comedian basically playing "himself" and he hangs out with three friends.  Jane is the new version of Elaine (and even played by a former 'SNL' player), while the other two are variations on Kramer and George: Instead of living next door like Kramer, Motif is John Mulaney's room-mate.  And instead of being his childhood buddy like George, Andre the human Furby is his weed dealer. 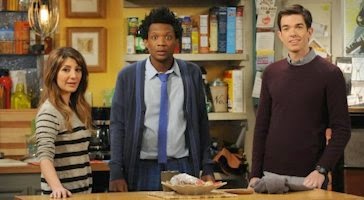 Normally, I'd say that 'Mulaney' should be given the same opportunity to grow and find itself.  But it should be starting at the same level as 'Seinfeld' did when that series ended.  Didn't they learn anything from that series in the sixteen years since it went off the air?  They had nine seasons of comedy gold to study as their blueprint!

I have a Facebook friend named Joe Bua who had this to say about the pilot:

John Mulaney is going to have to become a much better actor if his show is going to work. I watched it twice. If these scenes with Martin Short are to work he's gotta bring his game up. Fingers crossed, I like his standup a lot and there are some great jokes in the pilot. Seaton Smith and Nasim Pedrad can carry him through their scenes but he's gotta hold more of your attention in those scenes with Short than he did in this episode. 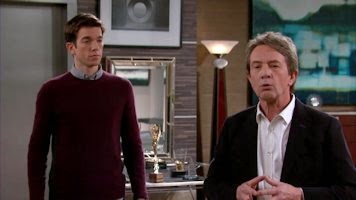 And I have to agree.

But at least 'Mulaney' contributed to the expansion of Toobworld with the TV show for which John Mulaney writes. 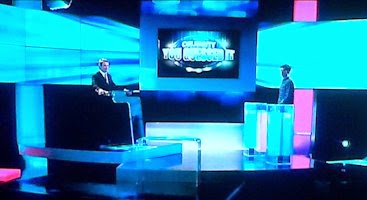 'Celebrity You Guessed It' (I'm assuming there's a regular version of the show as well.) is hosted by Lou Cannon (played by Short), who is insanely popular with the ladies who watch daytime TV.  And we got to see a film clip of Dean Cain's televersion as part of that show.  Cain's participation in that quick bit added to his League of Themselves tally which also includes 'Living Single' and 'Don't Trust The Bitch In Apartment 23'.  This makes him eligible for eventual induction into the TV Crossover Hall of Fame. 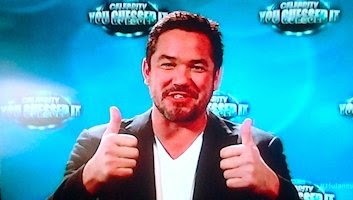 Since Sundays are part of my "weekend", I'll probably continue to check this out.  But that's only while the CBS schedule is screwed up by football.  Right now I'm watching 'Madam Secretary' and 'The Good Wife' live because I can't trust recording it due to impossibility of the NFL games to end on time.  So I'm recording 'Masterpiece Mystery!' and 'Mulaney' to watch later.

It's not much of a recommendation but it's the best I can do at this time.  Hopefully the writing (and Mulaney's acting) will get sharper.... 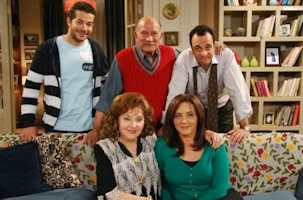 The Middle East is getting ready for the third season of the Arabic version of 'Everybody Loves Raymond' which is called 'El Bab Fel Bab'.  Because the culture is so vastly different from the West, both shows can exist in the main Toobworld.  Although the basic storyline may be the same as the original, the names of the characters will be different and that goes a long way toward acceptance of a remake.  (See 'All In The Family', 'The Office', 'Sanford And Son'.)  Otherwise, the plot in which one brother in the family is favored over the other is universal.
Check out this promo for the series:

The same holds true for the Russian and the Polish versions of 'Everybody Loves Raymond'.  Even the British version has changed the names of the characters, with Michael Smith replacing Ray Barone.

THEORIES OF RELATEEVEETY: THE ITALIAN CONNECTION 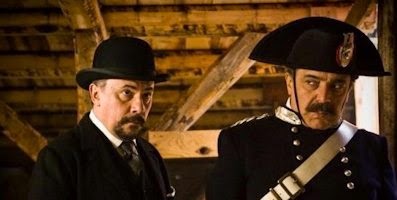 In 1890, Marshal Paolo Giummaro of Vigata, Sicily, teamed up with police detective Inspector Ernesto Bellavia to investigate the disappearance of bank executive Antonio Patò, who vanished after playing Judas in the annual Passion Play.

Despite their cultural "differences"*, Giummaro and Bellavia came up with the solution which also satisfied any questions about several other mysteries in Vigata.  However, politically their solution was unacceptable (because of the involvement of the Mafia and possible scandal for the bank) so they faked a second solution to keep all involved parties happy. 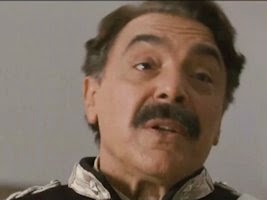 One of Giummaro's children moved to the mainland of Italy and settled in Gubbio, a small town on the slope of Mt. Ingino in the province of Peruggio (which is also known as Umbria.)  Whether it was a daughter who married and moved away, or a son in search of his own destiny, eventually the family name changed so that for Toobworld research it would be the lineage of the Cecchini branch which would be followed. 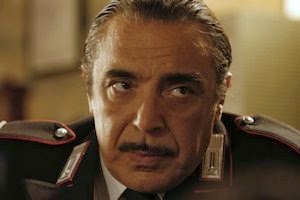 Giummaro's great-grandson, Nino Cecchini, carried on the legacy of his great-grandfather by becoming a "Maresciallo" in that provincial town.  Despite his commanding officer's objections, Marshal Cecchini would often seek out the help of the local priest, Don Matteo, in solving murders in Gubbio. 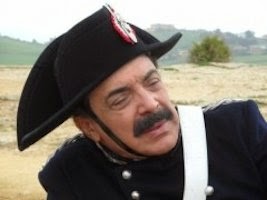 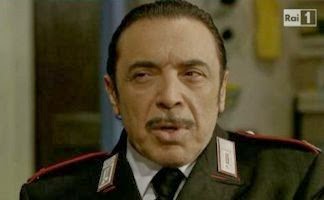 * Giummaro was from the south of Sicily and Bellavia was from the north.  As Bellavia kept pointing out, everything remained the same.  (There were no differences in their speech, for example.)

THE SHAME OF TOOBWORLD: FOX NEWS ON "POPEYE" & "WONDER WOMAN"