Once again I’m running so late with my blog posts for the Television Crossover Hall of Fame.  And it’s only five posts a month!  I guess after thirty years of working on my Toobworld concept, I’m finally burned out.  I find I would much rather be exploring my realm of Wayside, Connecticut.  Those stories may not be good but almost everything is mine… almost, and I’m not restricted in the structure of those stories by any limitations on the universe.

Shameless plug time – if you’re interested in reading any of them, I have a Facebook page – “Wayside, Connecticut”.  I would suggest reading them via the photo galleries; pick a category and read them in order.  And please like the page even if you don’t plan on visiting very often (or ever again!)  It helps…..

This was supposed to be the final entry in eptember and as we’ve been doing all year, it’s a Real World TV series which has a Toobworld “televersion”.  And so…. 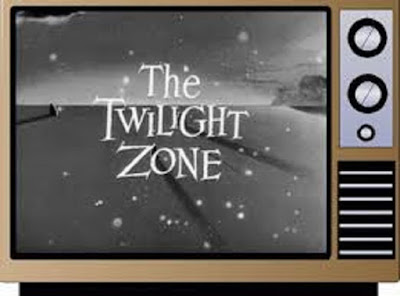 THE TWILIGHT ZONE
From Wikipedia:
‘The Twilight Zone’ is an American media franchise based on the anthology television series created by Rod Serling. The episodes are in various genres, including fantasy, science fiction, absurdism, dystopian fiction, suspense, horror, supernatural drama, black comedy, and psychological thriller, often concluding with a macabre or unexpected twist, and usually with a moral. A popular and critical success, it introduced many Americans to common science fiction and fantasy tropes.

The first series, shot entirely in black and white, ran on CBS for five seasons from 1959 to 1964.

One might think ‘The Twilight Zone’ should have been saved for the October TV show.  But one would be wrong. This show really is more attuned to the world of show business which is depicted throughout the series in one aspect or another.

Besides, there is another show which will be inducted next month for the Halloween tradition.

Rod Serling, the creator of the series, was inducted into the Hall not only for contributing such a vital element to Toobworld, but also for taking part in the show as its host, an Observer, and at least as a participant in the story.  (“A World Of His Own”)

For Toobworld, the anthology series not only takes place on Earth Prime-Time – Past, Present, and Future – but also on other planets and in other dimensions.  And most Toobworlders only know of that as being fictional, as seen in their televersion of the show that we watch.  They have no clue they’re watching actual events being transmitted thanks to the powers of Rod Serling’s televersion.  So what we see as the Trueniverse audience is “real life” as it plays out on Toobworld, other worlds, and on alternate Toobworlds.  And for the Toobworlders, they’re watching depictions of that, plus a few episodes only to be found in that TV world.

Here's an example of Toobworld’s fictional televersion of ‘The Twilight Zone’:

Saved by the Bell: The College Years:
A Thanksgiving Story (1993)

Alex says that she watched an episode of "The Twilight Zone" that included goat people.

When TV characters mention ‘The Twilight Zone’, sometimes it can be a toss-up as to it being a reference to the TV show or to the actual location/state of being.

Here’s an example in which the Twilight Zone had to be real:

Here are many of the shows which have referenced their own version of ‘The Twilight Zone’:

Missing from that list are cartoons, talk shows, remakes, game shows, documentaries, and sketch comedy shows.  It could be that some of those which are listed might not actually belong. 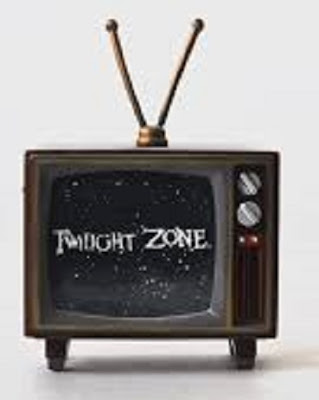 Welcome to the Hall, Twilight Zone!
Posted by Toby O'B at 12:30 AM 0 comments