I could have used this clip last year when I did a showcase on Sammy Davis Jr. for the daily feature "The League Of Themselves".....


I didn't know about this appearance before, so there's another addition to his tally as a member of the TV Crossover Hall of Fame (inducted February, 2001).


Bahavia must have an interesting history in Toobworld, at least in the Toobworld of Sitcom Presidents.  This fictional country, often mentioned in 'Cory In The House', seems to be located in South America as Wikipedia claims that it resembles Bolivia.  But its cultural touchstones are from India, Uzbekistan, Kyrgyzstan, Pakistan  and Pakistan.  The Bahavians in the show speak English with an accent that is a blend of Brazilian and Indian.

This applies only to Toobworld, but if Bahavia is to be found somewhere close to the west coast of South America as Wikipedia's comparison to Bolivia might suggest (Bolivia's land-locked), then the Indian/Uzbecki influence had to be due to eastern migration from the Greater Subcontinent regions across the Pacific.

And that would have entailed quite a journey around the underside of Australia and past the various island nations before a very long stretch across an empty expanse of ocean...... Linda Carsini, a photographer for Jonathan Jackson's Vegas casino, was related to Adrian Carsini and his half-brother Enrico ("Ric").  Adrian Carsini was a fanatic about wine who managed the Carsini Vineyards in California, while Ric was an irresponsible playboy who owned the land upon which the vineyard was located. 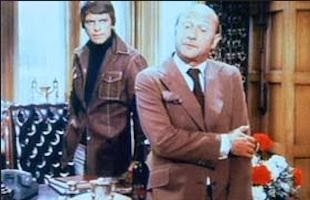 They weren't closely related, not that Linda would have had any stake in the Carsini Vineyards. At best she may have been a younger second cousin.   But it's pozz'ble, just pozz'ble, that once both of the Carsini brothers were no longer able to manage the estate themselves, Adrian instructed his lawyers to put her in charge of the vineyard's conservatorship.  (Then again, he may have been forced to sell it to the Merino Brothers in order to pay for his legal defense.)

But if she was given control of the estate as the only other blood relative, then Linda did quite well for herself after her involvement in that casino heist.


The Silver City, land of my birth, made the CBS2 Evening News on Tuesday, February 18..... 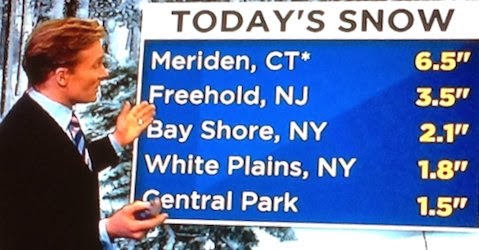 The reason for getting "Maris'd" with that asterisk was because Meriden, Ct. is just outside the broadcast range for the station (although I know the station is picked up on dish and cable even farther away.)

But just a nice bit of nostalgia for me, living down here in the City........

A KRYPTONIAN NAME-CHECK FOR "BANACEK"

'BANACEK'
"A MILLION THE HARD WAY" 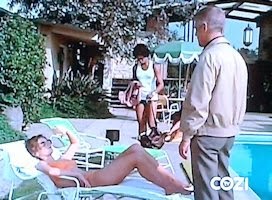 When Thomas Banacek introduced himself to Linda Carsini, he only used his last name.

In the Toobworld Dynamic, any mention of Superman without reference to the movies, TV series, or the comic books means that it's a reference to a man who once lived in the same world as the characters who mentioned him in other TV shows.

And even if there is mention of those outside sources, we can easily splain them away - all of the secrets of Superman became known after he died in the early 1960's.

So this is no big deal, but there was a trivial tidbit of interest but which has no bearing on the universe of Earth Prime-Time:

Linda Carsini was played by Margot Kidder.  The 'Banacek' episode was broadcast in 1972, six years before she starred in the movie "Superman" as Lois Lane with Christopher Reeve as the Man of Steel.....

Labels: By Any Other Name, Game of the Name, La Triviata, O'Bservations, Outside the Box, Splainin 2 Do 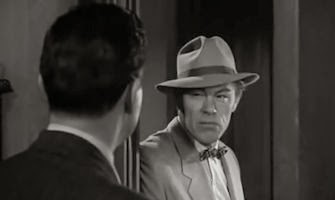 When Alexander Gifford was put in touch with a hitman, he never did learn the name of this accommodating killer who gave him advice on how to get rid of his wife.

Many TV characters have exact duplicates in the Cineverse, but usually they appear only in movies based on their TV shows:
But sometimes we can find ways to make allowances.  And having a nameless hitman works just fine.

Over in the Cineverse, the Hitman was known by the name of Sugar Smallhouse and even that could have been an alias.  He was mixed up in a murder case that involved a radioactive MacGuffin and which ultimately led to the loss of his own life.... 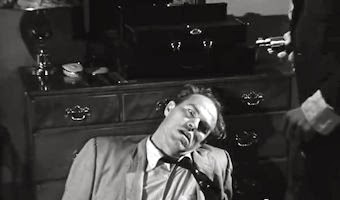 As I mentioned, "Sugar Smallhouse" was probably an alias, so this Cineverse counterpart could have been thugs in other movies - so long as they took place before 1955....

As for Earth Prime-Time, I'd like to keep the Hitman's options open.  Jack Lambert was a natural when it came to playing the bad guys, what with those distinctive eyes.  And I'd like to combine some of those roles together.

Twelve years ago Jack Lambert passed away.  I'd like this to be a small tip of the fedora to the one of the denizens of Toobworld whom he portrayed..... 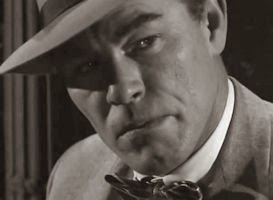 Labels: As Seen On TV, Big Screen TV, By Any Other Name, Game of the Name, Hat Squad, Outside the Box, Tele-Folks Directory, TV timeline

At the Winter TCA meeting, producer Dick Wolf announced that there will be a three-way crossover between 'Chicago Fire' and its spin-off 'Chicago PD' with the New York-based 'Law & Order: Special Victims Unit'.  Once it's over, Chicago Detective Sergeant Hank Voight (played by Jason Beghe) and Detective Alvin Olinsky (Elias Koteas), Officer Kevin Atwater (Laroyce Hawkins), should be eligible for induction into the TV Crossover Hall Of Fame, having been spun off from 'Chicago Fire'. 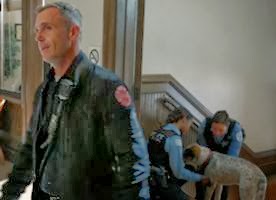 This year's crop of crossovers began with the 'Chicago PD' premiere, when Christopher Hermann and the dog Pouch from the original series showed up.  So Hermann should be eligible as well.  (Not so sure about Pouch.....)

And I don't know if this will be part of that three-way crossover, but Detective Erin Lindsay (played by Sophia Bush) has already filmed a scene with Mariska Hargitay's Detective Olivia Benson from 'SVU'.  (It could be the set-up for the coming crossover.)

This should show up on your TV screens after the Olympics are done....


Two sitcoms not included in the TV dimension of Sitcom POTUSii would be "The Secret Files Of Desmond Pfeiffer" and "That's My Bush!"  These are sitcoms which feature idiotic versions of Abraham Lincoln and George W. Bush, (not so) respectively - which in W's case -#  Nah, too easy.... 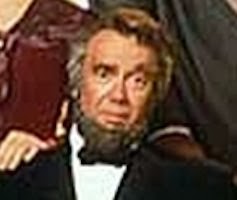 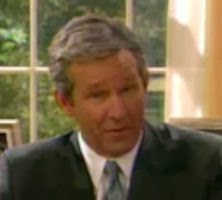 Both of these shows are set in Doofus Toobworld, where Real World figures are seen as pure idiots.

Labels: Alternateevee, As Seen On TV, Splainin 2 Do, Tele-Folks Directory 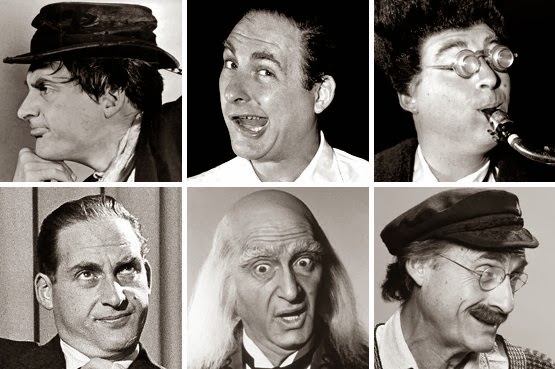 I'm not sure what there is for me to say about the passing of Sid Caesar that hasn't been said far more eloquently and definitely in a far funnier fashion than I could possibly muster.

And when it comes to his involvement with the main Toobworld, he is recognized for his sketch comedy series in the 1950s as it was referenced in an episode of 'Moonlighting': Agnes DiPesto's mother Clara suggested using a trick she picked up from 'Your Show Of Shows' - pulling the rug out from under two of the bad guys.  ("Los Dos DiPestos")

The joke of course is that Clara DiPesto was played by Imogene Coca, who worked with Caesar on that show.....

Otherwise, all of his contributions to Earth Prime-Time consisted of guest appearances and cameos in other TV shows, mostly trading in on his linguistic schtick, as a genius in faking foreign languages.  For instance, his role as an exiled Russian Prince on 'Matt Houston' and probably "The General" in 'Vega$'.

As for the Gryphon in yet another variation on the Wonderland mythos, I wonder if his casting was influenced by the way he looked when he injured himself at the end of "It's A Mad, Mad, Mad, Mad World".  There was always something "beaky" about the faces he made..... 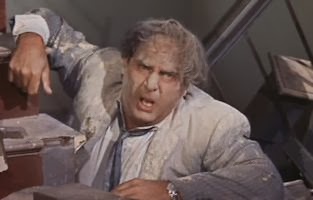 But he put a lof of himself into those roles.  In fact, with two of them - as Uncle Harold on 'Mad About You' and as Mr. Stein in 'Love And War', Caesar was nominated for the Emmy Award for Best Guest Actor.

My favorite of these characters was Lou Bundles, the washed-up magician whose career was revitalized by a magic pack of playing cards.  ('Amazing Stories' - "Mr. Magic") 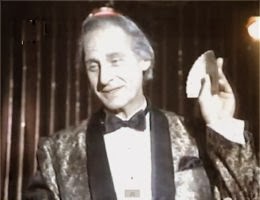 The Gryphon wasn't his only non-human character.  He was also one of the many manifestations of the Devil, going by the name Nick Lucifer.

All of his other characters may have already died in Toobworld, but Nick Lucifer - like Sid's legend as a comedy genius - will be immortal.....

Here's a list of his TV roles that helped expand the main Toobworld.....

Side by Side
Louis Hammerstein

Alice in Wonderland
The Gryphon 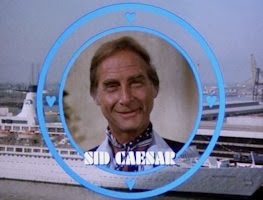 The Misadventures of Sheriff Lobo
The Bomber
- Another Day, Another Bomb (1981)

Barnaby and Me
Leo Fisk

Make Room for Granddaddy
- Tonoose, the Exile (1970)
[Considering Danny Williams was in show business, Sid may have been playing himself.  But knowing his skill at playing foreigners, maybe he was a Lebanese elder from Toledo.....]

FROM THE VIEW-MASTER: "GAME OF THRONES" SEASON 4


Here's a fifteen minute preview of clips and interviews about the upcoming season of 'Game Of Thrones'.


Although we didn't see it here, we mght get to see "Little Hodor" this season.  It's only fair that those so inclined might have some fair play when it comes to male nudity on this show, even if it is Hodor.

After all, it's not like you're going to get any more from Theon Greyjoy....