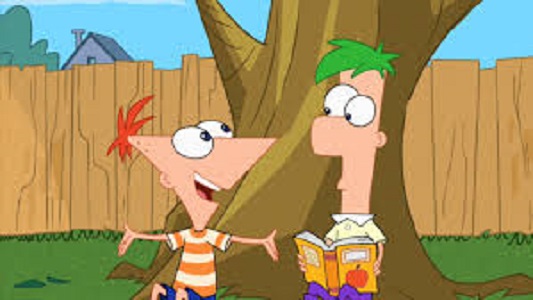 With our June entries into the Television Crossover Hall of Fame, we look for an applicant who’s either a puppet, a duo, a cartoon character, or just plain weird.  This month we’ve got “weird” pretty much covered every week; we inducted a puppet last week; so let’s go for a cartoon duo for the penultimate Friday Hall of Famer! 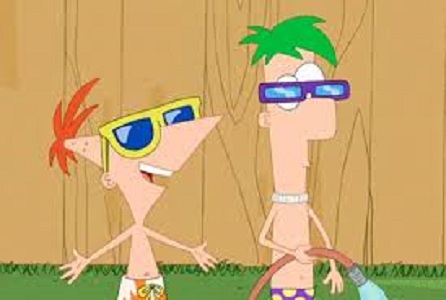 From Wikipedia:“Phineas and Ferb” is an American animated musical comedy television series. Originally broadcast as a one-episode preview on August 17, 2007 and again previewed on September 28, 2007, the series officially premiered on February 1, 2008 on Disney Channel, running until June 12, 2015. The program follows Phineas Flynn and his stepbrother Ferb Fletcher on summer vacation. 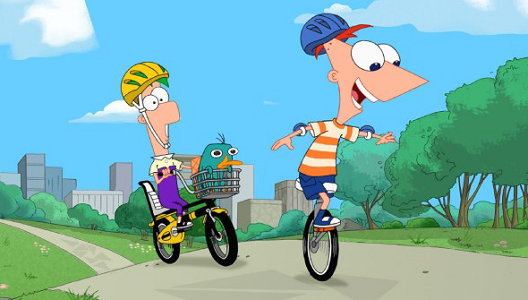 Every day, the boys embark on some grand new project; these are usually unrealistic given the protagonists' ages (and are sometimes downright physically impossible), which annoys their controlling sister, Candace, who frequently tries to reveal their shenanigans to her and Phineas' mother, Linda Flynn-Fletcher, and less frequently to Ferb's father, Lawrence Fletcher. 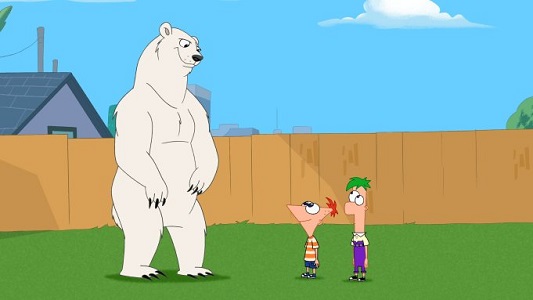 The series follows a standard plot system; running gags occur every episode, and the b-plot almost always features Phineas and Ferb's pet platypus Perry the Platypus working as a spy (named "Agent P") for OWCA (the Organization Without a Cool Acronym), to defeat the latest scheme of Dr. Heinz Doofenshmirtz, a mad scientist driven largely by a need to assert his evilness (although he is not especially evil and has a good heart in some situations.) The two plots intersect at the end to erase all traces of the boys' project just before Candace can show it to their mother. This usually leaves Candace very frustrated. 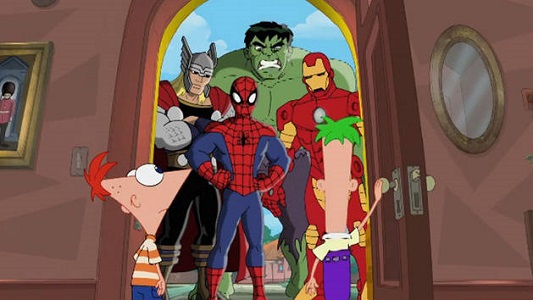 A crossover between Phineas and Ferb and Marvel Entertainment aired in the summer of 2013, titled “Phineas and Ferb: Mission Marvel”.  It features Marvel Comics superheroes Iron Man, Spider-Man, the Hulk and Thor and the villains the Red Skull, Whiplash, Venom and M.O.D.O.K.. It is the first major animated crossover between Marvel and Disney since the acquisition of Marvel Entertainment by Disney in 2009. 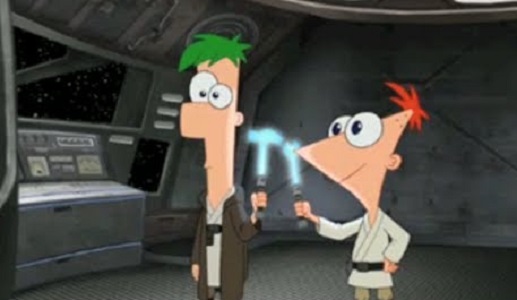 In July 2013, the producers announced a Phineas and Ferb/Star Wars crossover which was used as a sidebar to the events of “Episode IV: A New Hope”. The special aired on July 26, 2014.

Co-creator Dan Povenmire said that he would like to do a crossover with his and Jeff "Swampy" Marsh's follow-up show, “Milo Murphy's Law”, which takes place in the same universe as Phineas and Ferb.  The episode premiered in January 2019. The entire cast [reprised] their roles with the exception of Ferb who was voiced by David Errigo, Jr. 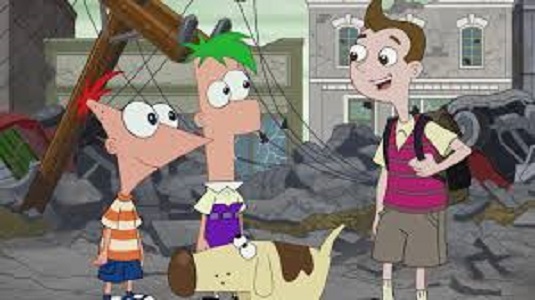 Before the crossover aired, a character from “Phineas and Ferb”, Dr. Heinz Doofenshmirtz, cameoed at the end of the episode "Fungus Among Us"; following the crossover, the characters Doofenshmirtz, Perry the Platypus, Major Monogram and Carl joined the cast of “Milo Murphy's Law” in a recurring capacity. 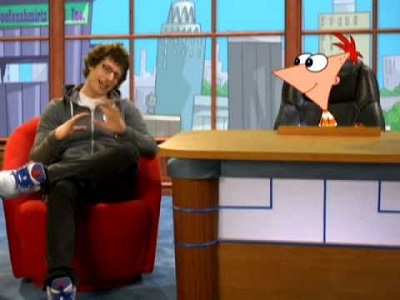 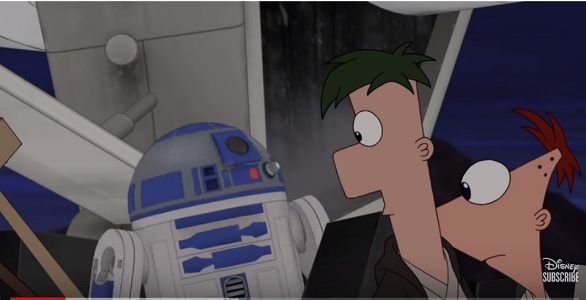 As for “Star Wars”?  George Lucas is going to hate this, but the boys are now connected to the animated portions of the dreaded “Star Wars Holiday Special”! 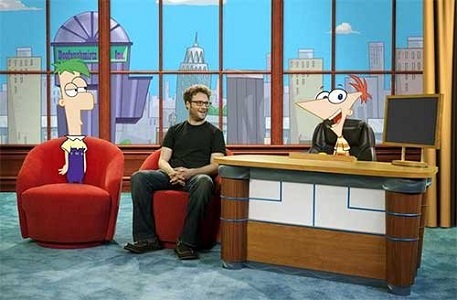 And any member of the League of Themselves who appeared on ‘Take Two’ and who also appeared as their fictional televersions in other TV series also provide the connections to those live-action series for this animated show.  That’s not something many many characters can lay claim to.Welcome to the Hall, Phineas and Ferb! 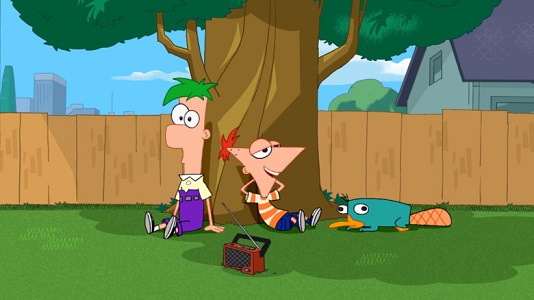 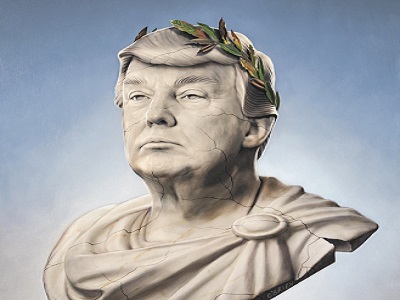 Years ago I posited a "Born To Rerun" theory that Dr. Bob Hartley of 'The Bob Newhart Show' was the reincarnation of Emperor Claudius from 'I, Claudius'.

And now it appears another TV character has the makings of a reincarnation for another alumnus of the 'I, Claudius' cast.

President Donald Trump is a TV character.  Puttiing 'The Apprentice' and acting portrayals aside, he  has a fictional televersion as part of the League of Themselves.  The tele-Trump has appeared in 'The Job', 'The Nanny', 'Fresh Prince Of Bel-Air' and 'The Drew Carey Show' among others.  (He was inducted in the 10th anniversary of the TVXOHOF as one of the April Fool entries.)

So Trump is open to being a candidate for reincarnation in the TV Universe.  And which 'I, Claudius' alumnus do I think could be one of the past lives of Trump's televersion?

It's purely subjective, based on my perspective.  But based on his own words, Trump would like to be a dictator just as Caligula was.  And there are times when we might question his sanity, and we know Caligula was batbleep crazy.

So what triggered this idea in my head?  It was this headline that came out today from Trump's favorite network: 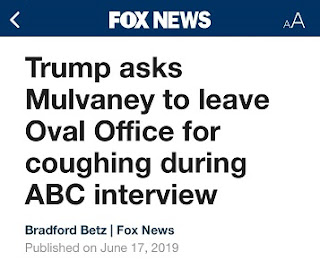 And that's what reminded me of 'I, Claudius'.

Tiberius Julius Caesar Nero Gemellus, known as Tiberius Gemellus (10 October AD 19–37/38) was the son of Drusus and Livilla, the grandson of the Emperor Tiberius, and the second cousin of the Emperor Caligula. Gemellus is a nickname meaning "the twin". His twin brother, Tiberius Claudius Caesar Germanicus II Gemellus, died while still an infant in 23. His father and older cousins died, and are suspected by contemporary sources as having been systematically eliminated by the powerful praetorian prefect Sejanus. Their removal allowed Gemellus and Caligula to be named joint-heirs by Tiberius in 35, a decision that ultimately resulted in Caligula assuming power and having Gemellus killed, or by forcing him to kill himself, in late 37 or early 38.

Following an illness by Caligula, Gemellus was put to death in late 37 or early 38.  Suetonius says that Gemellus took medicine for a chronic cough and that the smell was detected, leading to accusations of taking an antidote for poison. He was ordered by Caligula to commit suicide for which soldiers gave him a sword, and had to help him because he is said to have not known how to kill himself with it.

Gemellus is played by Douglas Melbourne in the episode "Zeus, by Jove!" of the 1976 BBC TV series 'I, Claudius'. 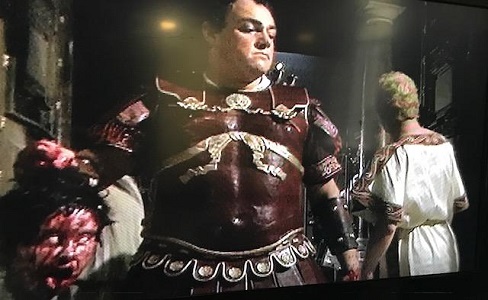 It was in that miniseries that Caligula had Gemullus' head cut off in order to "cure" that cough.  So the President's Chief of Staff Mulvaney probably got off lightly by being forced out of the room by Trump.


Hmmmm.... Now that I think of it, Caligula made his horse a senator. And Trump has suggested Sarah Sanders should become governor.

And both have expressed an interest in women in their families.