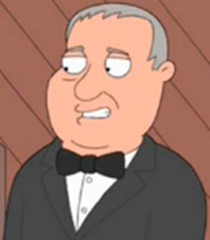 Back on December 12th, I inducted Frank Sinatra into the Television Crossover Hall Of Fame on the 100th anniversary of his birth.  And now, less than four months later, his son Frank is joining him - sadly, in memoriam. 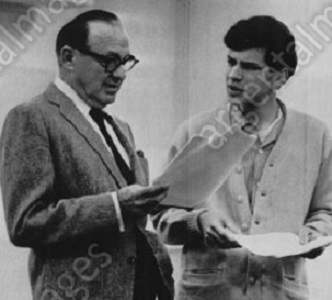 On March 16, 2016, the Sinatra family said in a statement to the Associated Press that Sinatra had died unexpectedly of cardiac arrest while on tour in Daytona Beach, Florida, at the age of 72.

Being the third in my family to bear my name, I at least got off lucky because everybody called me "Toby" before I was born, based on my initials: "T O'B".  So I was able to create my own identity and not be in the shadows of my father and grandfather.  But I also didn't have to worry about having such a looming shadow hanging over me either.  Ol' Blue Eyes never did his son any favors by saddling him with the full name.  Just being a Sinatra would have been enough to help the kid get into the business as well.

At any rate, as a member of the League of Themselves, Frank Sinatra Jr. established his fictional televersion in Earth Prime-Time with the added "benefit" of having the key event in his life be dramatized on the History Channel.  And that would be the time that he was kidnapped and held for ransom as a young man.  (There was also a 2003 theatrical movie about it as well.)

Here's how his fictional life shaped up in Toobworld:

'The Jack Benny Program'
- "Frank Sinatra Jr. Show" (1962)
Jack's guest, Frank Sinatra, Jr., makes his national TV debut and sings "My Kind of Girl." Don brings out his son Harlow to proudly announce it's the boy's 19th birthday; Jack and Harlow snipe at each other while Don does the Jell-O commercial.

After seeing Don with his son, and Frank Jr. performing, Jack imagines what it would be like if he had a boy: Playing his own imaginary son, Jack Benny Jr., he appears with Harlow and Frank Jr. as typical teenagers in a wild spoof of the "Twist" dance craze. The group performs the rock & roll tune "She Has a Wig, Contact Lenses, and a Nose Job." - IMDb 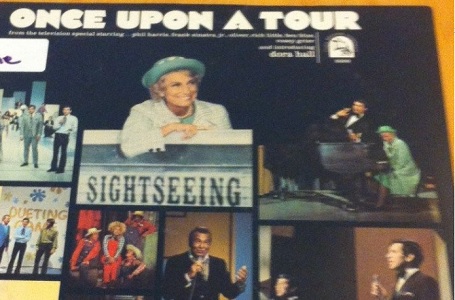 "Once Upon a Tour" (TV Movie)
A grandmother saves up her pennies and goes on a tour of TV studio, and her dream of interacting with show business personalities comes true!

This show and its companions, "The Toy Pony" (1974), "Rose on Broadway" (1978), and "Imagine That" (1979) were vanity projects financed by Dora Hall's husband Leo Hulseman, the founder and president of the disposable cup manufacturer, Solo Cup Co. The programs were syndicated as TV "specials" and designed to showcase Hall's virtuosity as an entertainer. In "Once Upon a Tour" and "Rose on Broadway," for example, Dora Hall - a grandmother in her 70's with limited show business experience - sings, dances, and swaps jokes with her celebrity guests. The specials were a spin-off from the vanity sound recordings waxed by Dora Hall in the 1960s and distributed free (through mail-in offers) along with the cups and paper plates Solo Cup manufactured. - IMDb

'The Sopranos'
- "The Happy Wanderer" (2000)
Before the card game, Christopher Moltisanti grooms Matt Bevilaqua and Sean Gismonte giving them the dos and don'ts when they arrive at the game. Furio Giunta arranges the game to be held at the Teittleman motel, and is derisive when Hillel Teittleman complains about the criminal enterprises the mob has brought into his family's establishment, noting that the Hasid enjoys the services of their prostitutes. At the card game, the players include Frank Sinatra, Jr., Johnny Sack, Silvio Dante, and Dr. Ira Fried. - Wikipedia 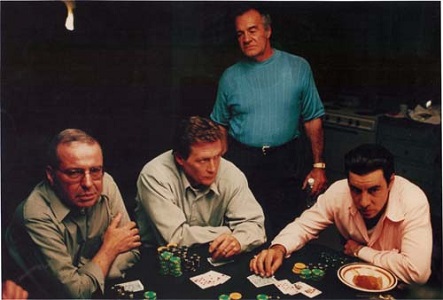 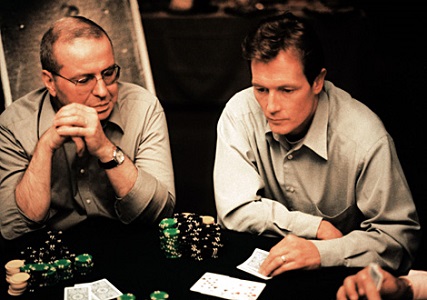 'Family Guy'
- "Brian Sings & Swings" (2006)
Brian and Stewie go on tour singing classic tunes with Frank Sinatra, Jr.  (After a near-death experience (caused by Peter), Brian decides to live for the moment, and ends up joining (along with Stewie) Frank Sinatra Jr.'s stage show. Although things are great for them at first, Brian takes the hard living too far and nearly drinks himself to an early grave.) 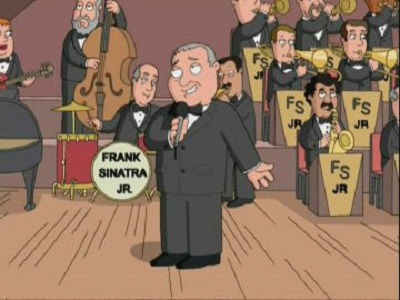 - "Tales of a Third Grade Nothing" (2008)
Brian and Frank Sinatra Jr. buy the nightclub, and Stewie turns it into a trendy hotspot.
[The tattoo Frank Sinatra Jr. sports on his upper right arm is the Japanese character for "sheep". It insinuates that he and Brian have accepted the change in the club and are blindly going along with it.] 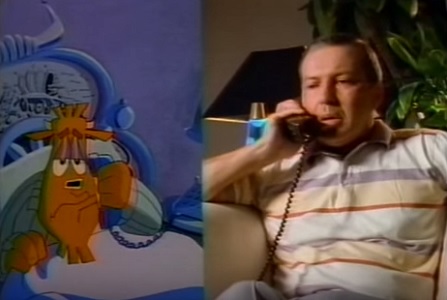 "The Jackie Bison Show" (TV Pilot) 1990
This was going to be NBC's answer to 'The Simpsons', but this one pilot, in which a buffalo voiced by Stan Freberg tried to emulate the classic comedy of 'The Jack Benny Show' died with the pilot.  Frank Jr. showed up in the third act as himself.  And he was able to communicate with the Tooniverse from Earth Prime-Time.

'The Defenders'
- "Pilot" (2010)
In the pilot, the two main characters got front row seats in Vegas to see Frank Jr. in concert. 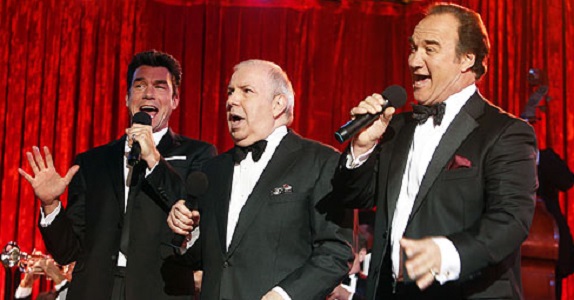 So with this induction, I hope your passing is easier for those who mourn you.

Welcome to the Television Crossover Hall of Fame, Frank Jr...... Today marks the 90th birthday of legendary funnyman and humanitarian Jerry Lewis.  So I thought it made for a good time to celebrate his presence as himself in Toobworld.

Of course, most prominently would be his run as the driving force behind the MDA Labor Day telethon each year from its beginning in 1966 to 2010.  And then there was his ill-fated attempt to compete against Johnny Carson in the late-night talk show game in 1963. 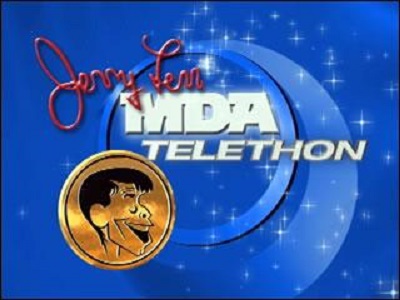 Both of those are accepted as second-tier qualifications for membership along with other TV shows that have a "televersion".  Sure, there are plenty of talk shows and variety programs which could be considered, but these are definitely embedded into the TV firmament: 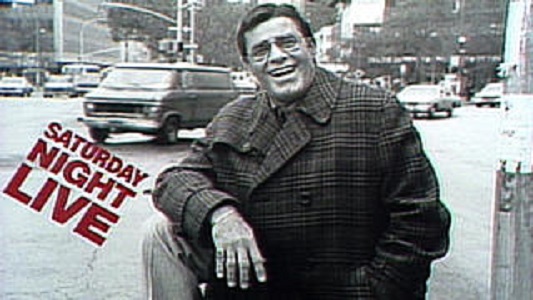 But that's not good enough when so many others actually had their televersions involved in fictional scenarios. 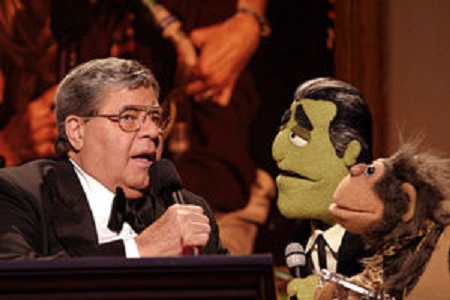 Well, luckily for this tribute, Jerry Lewis appeared as himself in Earth Prime-Time four times, one more than was needed for the requirements!

'The Jack Benny Program'
- "Jack Visits the Vault" (1953)
It was an enlargement on a minor radio gag, much embellished with the advantages of television. He takes somebody to the basement of his house, which is super-bugler-proofed. I think there were alligators in a moat, creaking doors; and of course a guard who never saw the light of day, asking Jack if Coolidge was still president! But the thing I remember best is, after an enormous guillotine blade came down just behind them, Jack turned to his guest and said, "I've got to get that fixed. You know, it should have killed me!" - J.H. Boswell for the IMDb 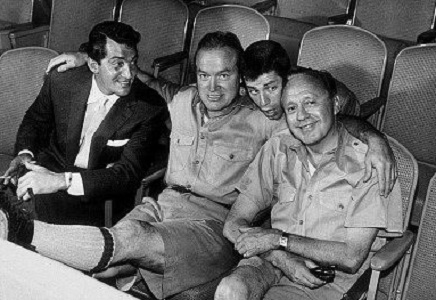 - "The Road to Nairobi" (1954)
In this live episode, before the monologue, Bob steals Jack's pants, so Jack wears Don Wilson's. The skit features Bob and Jack as big game hunters in Africa, who get captured by cannibals. Martin & Lewis do a cameo at the end. - IMDb

'Batman'
- "The Bookworm Turns" (1966)
Lewis was addressed as "Citizen", but it's O'Bvious he was appearing as Jerry Lewis.


'Brothers'
- "Las Vegas Serenade: Part 2" (1987)
The urn with Aunt Billie's ashes has been presented to Jerry Lewis as a decoration, and Donald and Lou must retrieve it. Meanwhile, Sam tries stand-up comedy, and Penny and Jim contemplate a Vegas wedding. - The 'Brothers' Wikia

There is a version of Jerry Lewis in the Tooniverse, however he was voiced by David Lander and so is an "As Seen On TV" character rather than an animated member of the League Of Themselves. 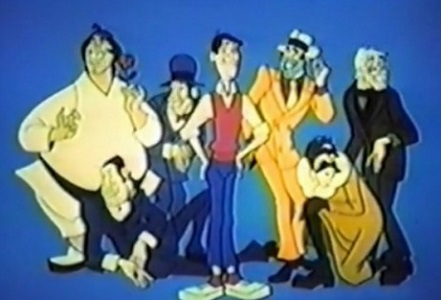 So here's to you, Mr. Lewis.  I will admit that I'm not a big fan of your comedy movies, but I was really impressed with your dramatic turn in the Garment District arc on 'Wiseguy' back in the 70s.  At any rate, my position as the Curator for the TVXOHOF doesn't allow me to keep the qualified nominees out.  Otherwise Jack the Ripper, Hitler, Lee Harvey Oswald, Elmo and Donald Trump never would have been allowed through the door.


Fear not!  There was an apostrophe in that subject heading......


As the primaries continue to winnow down the candidates, I thought it was time to jump into the campaign mud and share a few classic blipverts from 1964.