"Some guy who looked like Batman saved me."
Roger
'CSI'
"Hero To Zero" 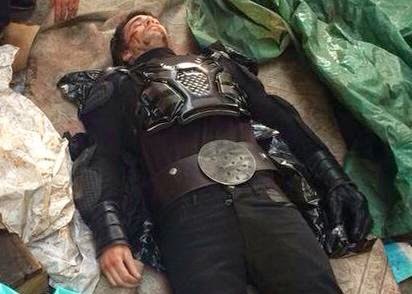 This is one of those references which I would consider being about the real Batman.

Although the "superhero" in question was tricked out more like Christian Bale in the movies, Roger was a homeless man who probably never saw any of the movies with their fictionalized portrayals of the 1960s crime fighter.  Therefore he must have been talking about the "real-life" Caped Crusader.

Of course, he may not have fallen on hard times until recently.  So it's pozz'ble, just pozz'ble, that he had seen the TV show made about the real Batman and which starred TVXOHOF member (twice over!) Adam West, who bore an amazing resemblance to Bruce Wayne.

Victoria Sweeney is the head of security for the lycanthropic corporation known as Segolia.  When referred to by her underlings and others in the firm, they call her "The Sweeney".  But always behind her back.....

For the British viewers, it would seem that the nickname is a reference to the TV show from the 1970s which starred John Thaw and Dennis Waterman and which inspired the ambience of Sam Tyler's nightmare world in 'Life On Mars'.  The rough tactics of the members of that team of detectives would suggest that those Segolia employees saw a kinship in Ms. Sweeney to those maverick coppers.

But "The Sweeney" is actually a reference to an actual squad of detectives.

From Wikipedia:
The Flying Squad is a branch of the Specialist Crime & Operations section, within London's Metropolitan Police Service. The Squad's purpose is to investigate commercial armed robberies, along with the prevention and investigation of other serious armed crime. Possibly one of the best known operations of the squad was their foiling of the Millennium Dome raid. 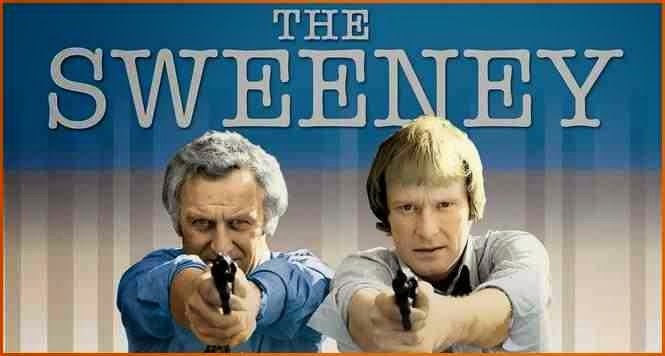 'The Sweeney' is a 1970s British television police drama focusing on two members of the Flying Squad, a branch of the Metropolitan Police specialising in tackling armed robbery and violent crime in London. The programme's title derives from Sweeney Todd, which is Cockney rhyming slang for "Flying Squad".

A further film adaptation, The Sweeney (starring Ray Winstone), was released in 2012.

So there is no discrepancy in calling Victoria Sweeney "The Sweeney".  But you might be in for worse than a Zonk should she catch you doing so!

Labels: As Seen On TV, Game of the Name, La Triviata, Outside the Box, Splainin 2 Do, Wikipediaphile, World Toob, Zonks

TIDDLYWINKYDINKS - FROM BOOKWORLD TO TOOBWORLD

In order to excuse herself from the others in her resident hotel so that she could get back to her undercover activities, Peggy Carter said that she was reading the latest Agatha Christie novel and had only five pages to go. 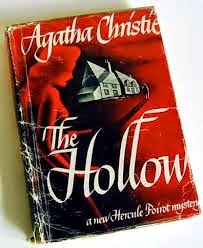 This would have to be "The Hollow", which would be known as "Murder After Hours" once it was published in 1946.  It was a classic "country house mystery" which Dame Agatha would later contend that she ruined by introducing Hercule Poirot into the narrative so late in the story.

In Toobworld, Agatha Christie was merely fictionalizing the actual Christow murder case.  Even though the events of the book came first and are considered official in BookWorld, in Toobworld we have to accept that the events as played out in the TV adaptation in 2004 were what really happened.  The televersion of Christie (played by Finella Woolgar in an episode of 'Doctor Who') embellished the real life events to fit her story's needs and even invented a character by the name of David Angkatell.  She let the murderer escape death by poisoned tea (although the killer would still likely be put to death by the State) when in the reality of Toobworld the murderer commited suicide. 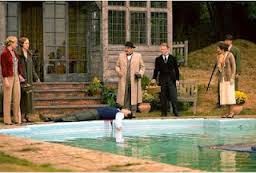 This is another good example why the Toobworld Dynamic doesn't absorb books into the TV Universe; there would be just too many discrepancies to splain away.

LASSIE - THE OTHER WHITE MEAT

The character of Lassie was first created by Eric Knight in a short story which he expanded to a novel published in 1940.  The movie version was released in 1943.

One Christmas, during World War II, Commander Quinton McHale and his men decided to bring a little holiday cheer to the children of Miss Parfey's orphanage on Taratupa.  They dressed up as Santa Claus and his oddball assortment of elves and made toys for all of the kids. 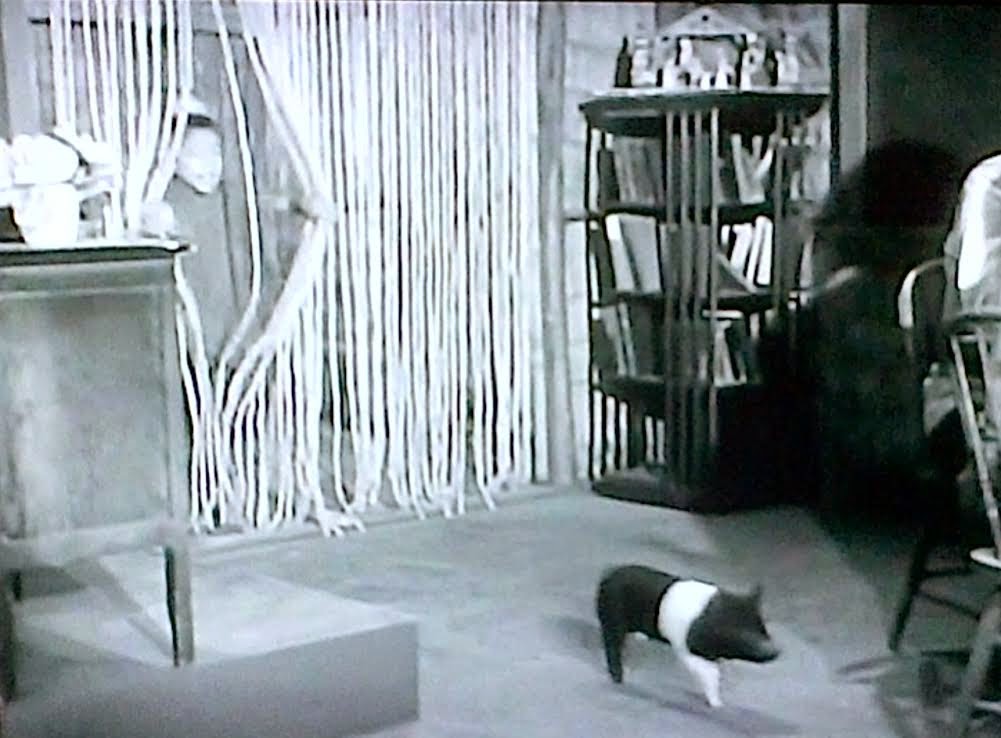 In the bedlam which ensued as the children celebrated, one little girl, named Tani, was seen chasing a piglet through the room.

"Lassie, come back!" Tani cried as she ran after it.

I am no expert on the timeline for 'McHale's Navy', but I think I will claim that the little girl knew of Lassie from the book, which Miss Parfrey probably read to her charges.  America didn't enter the war until December 7, 1941, and by 1945 McHale's squad was stationed in Italy.  The window doesn't seem wide enough for a print of a 1943 movie to have been available for use in a far off destination like Taratupa during a time of war.

I could be wrong, but the book is a logical and safer choice.

There is no Zonk when it comes to the TV version of 'Lassie', by the way.  Jeff Miller was also inspired to name his collie after the fictional dog, and since that happened most likely in 1953, a decade after the movie came out, I have no problem in claiming he was inspired by "Lassie, Come Home" the movie. 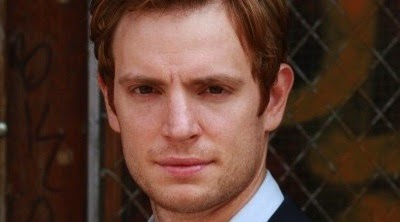 'Chicago P.D.' which is a spin-off from 'Chicago Fire', will now be spinning off a new member of the "Chicago Wolf" franchise via Dr. Ryan Halstead, brother to Officer Jay Halstead.

Apparently he will be the lynchpin for 'Chicago Med' which Dick Wolf is hoping will go to series, about which I've already posted.  According to executive producer Matt Olmstead, this new character is "a bit of a playboy and a successful doctor, but always off to the next good time.  [He] never really sticks around when things get complicated. We’re finding him in a point in his life when he has to knuckle down and get real about being in Chicago."

The role will be played by Nick Gehlfuss who previously had been in the series 'Shameless'.  After his debut on 'Chicago P.D.', Gehlfuss will be playing Dr. Halstead in an episode of 'Chicago Fire'.  And that's the episode which will serve as the backdoor pilot.

So that means it's pozz'ble, just pozz'ble, that Dr. Ryan Halstead will be eligible for the Television Crossover Hall Of Fame before the year is out......

Labels: Hall of Fame, Life During Prime-Time, Linkin' Case, Sign of the Crossover, Tele-Folks Directory, Theories of Relateeveety, Twipped from the Headlines


Moving on in our British theme for the 2015 Television Crossover Hall Of Fame, we come to the month of February.  As has been the tradition, February is sort of the Black History month, as it is in the real world.  And we have the perfect candidate who fits into our theme..... 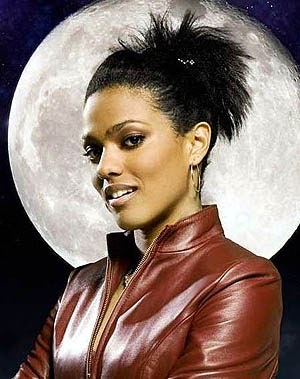 Martha Jones first materialized on our TV screens in 'Doctor Who' during the second year of David Tennant's tenure as the Doctor.  She became his Companion for that season, but left him at the end because there was so much more she wanted to do with her life.

But she could never go back to her previous life; the Doctor had basically ruined her for that by opening up the wonders of the Universe to her.  So Martha went to work for UNIT.

She came back to the show for a two-part episode and later for the two-part season finale in which she played a large important role.  But she also showed up for several 'Torchwood' episodes in which she worked with the team as a UNIT "advisor" on several cases. 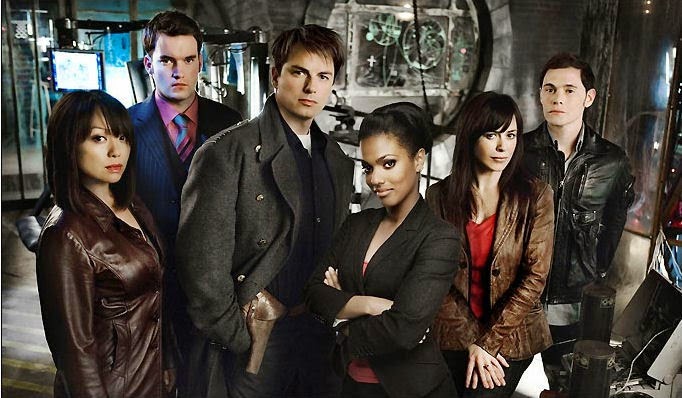 The last time we saw her in Earth Prime-Time, she had now hooked up with Mickey Smith, another former Companion and the former boyfriend of Rose Tyler.  By "hooked up", I mean they were working together - seen together in an abandoned factory being attacked by a Sontaran (whom I believe was Strax, but I can't be certain.) 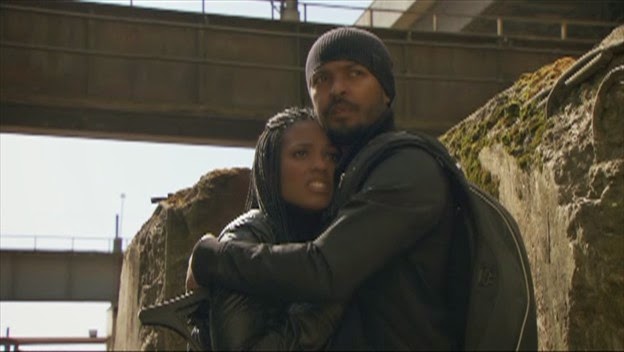 They could have become lovers, perhaps even a married couple, by the time the Doctor rescued them during his "farewell tour".  (That scene would not have necessarily been happening around the same time as it was broadcast; it could still be in the Future of the Toobworld timeline.) 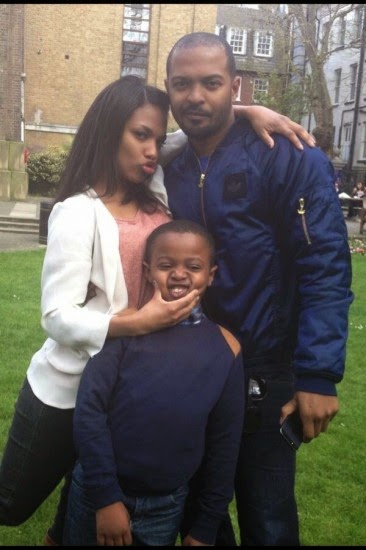 Who knows?
As Unseen On TV?

But I would hope we someday get to see Mickey and Martha working together again in the world of 'Doctor Who'.  They would make for a great team of leading roles for another spin-off, perhaps as independent agents or working still for UNIT.  "Smith & Jones" does have a nice ring to it....

Still, that's only two TV shows to her credit and we can only count 'Doctor Who' once, even though she came back several times as a guest star rather than as a co-star.  However, Martha was seen again the greater Toobworld Dynamic - she and the Doctor were seen as their counterparts in the Tooniverse for a special one-off, "The Infinite Quest". 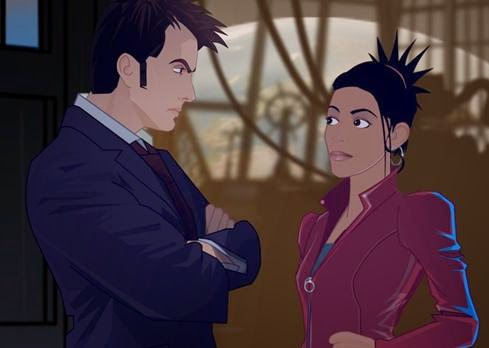 With that, Dr. Martha Jones fulfills the requirements necessary for entry into the Television Crossover Hall Of Fame. 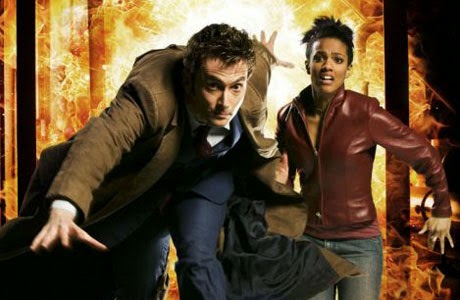