AS SEEN ON TV - MOLLIE 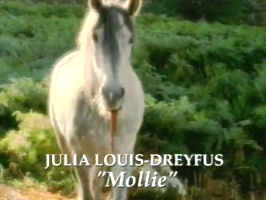 From Muppet Wiki:
Mollie is a pampered carriage horse in the Creature Shop-effects film Animal Farm.
Mollie first appears when informed by Jessie that there is a meeting. Unlike the other animals, who look forward to freedom from humans, Mollie worries about no longer being able to wear the ribbons she treasures.

However, early on, she does join Boxer in finding the food stores, and she marks the spot of Old Major's death with a ribbon. Later, she appears among the animals investigating the farmhouse.

Mollie represented the upper and middle class Russians that fled to the West. In the book, she ran off to another farm when she is forbidden to eat sugar cubes and wear ribbons on her head; the film adaptation glosses over her actual departure.

AS SEEN ON TV - BOXER 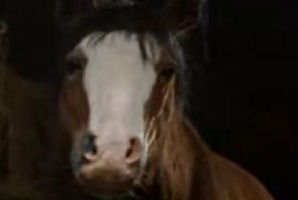 From Muppet Wiki:
Boxer is one of the main characters of Animal Farm, and he represents the working class of the Russian Revolution, and how they worked hard for a better life.

In the film, he is recognized as the kind and hard-working horse on the farm, despite being abused and bullied by Jones. He is best friends with Benjamin, but in the film this role has been taken over mostly by Jessie. He devoted all of his life trying to build (and soon remake) the windmill, and soon caused him his death. His death triggered Jessie's mind to evacuate the animals out of the farm, and lead them to safety.

Boxer's tragic death to Napoleon is just something he can get money to buy whisky out of, making him very corrupt.

AS SEEN ON TV - SNOWBALL 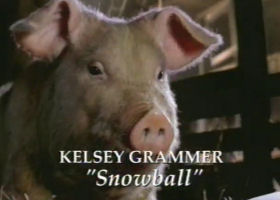 From Wikipedia:
Snowball is a fictional pig in the book Animal Farm written by George Orwell. He is based on Leon Trotsky.

Snowball believes in a continued revolution: he argues that in order to defend Animal Farm and strengthen the reality of Old Major's dream of a life without humans, the animals should stir up rebellions in other farms throughout England. He is the only Pig on the farm who works with the other animals and is the kinder pig on the farm. Snowball also writes the first version of the Seven Commandments. These are later altered by Squealer under the orders of Napoleon to accommodate the actions of the pigs. For example, the commandment stating “No animal shall drink alcohol” is changed to “No animal shall drink alcohol to excess”, and is later removed entirely. The rule that states, “No animal should sleep in a bed,” changed to “No animal should sleep in a bed with sheets”.

Snowball is eventually forced out of the farm when Napoleon uses his guard dogs to chase Snowball. After that he is blamed for problems on the farm, and it is claimed he was in support of Jones from the start. Though he fought bravely at the Battle of Cowshed, the facts are altered to say he openly fought for Jones and the shot wounds are changed to wounds Napoleon inflicted on him. Those accused of supporting him are executed after being forced to confess, and a reward is offered for his capture.

Snowball was a very inventive and quick speech pig that influenced others to his side. It is never revealed what happened to him after his escape, although in the 1950s film adaptation it is implied the dogs killed him. 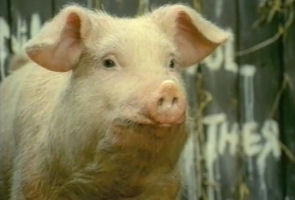 AS SEEN ON TV: OLD MAJOR 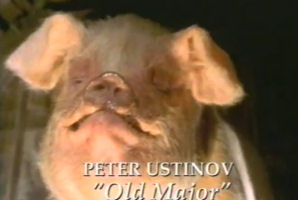 From the Muppet Wiki:
Old Major is an aging prized show pig in Animal Farm. Nearing the end of his life, Old Major wishes to impart wisdom to his fellow animals, encouraging them to rejoice in the nobility of their "animalism," care for each other collectively, and fight to eventually be freed from men. During the meeting at the barn, Jones (who is attracted by the noise) goes to investigate, he slips in mud and fires his gun, hitting Old Major in the rear. Major then falls back off of the loft to his death. His memory is honored by the animals, but later abused by Napoleon, who goes so far as to bring the rotting head of the boar, saved from the Jones' icebox. 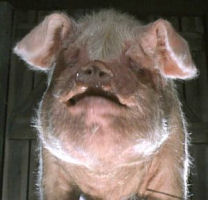 For the rest of my vacation, the theme for the As Seen On TV showcase will be George Orwell's classic allegory......

AS SEEN ON TV: THE CARELLAS 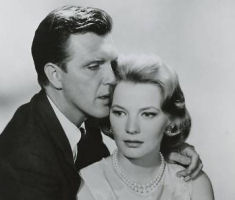 Carella was the lead detective at the 87th Precinct on his shift. Teddy was his wife, and she was a deaf mute.

ASYLUM OF THE DALEKS PREQUEL

AS SEEN ON TV: MEYER MEYER

The doubly-named Detective Meyer was a dry, oddly wry philosopher. I can't prove this, but he may have been the inspiration in the creation of Detective Arthur Dietrich on 'Barney Miller'. Within the reality of Toobworld, Meyer Meyer may have been Dietrich's mentor before Arthur joined the squad at the 12th Precinct..... 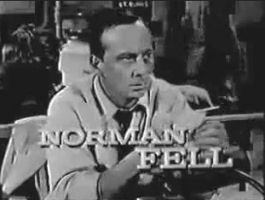 AS SEEN ON TV: BERT KLING 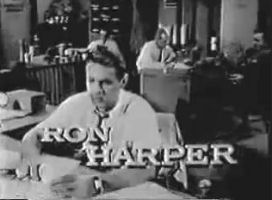 Bert was the "newbie" in the squad, hoping to learn all he could from his three mentors. 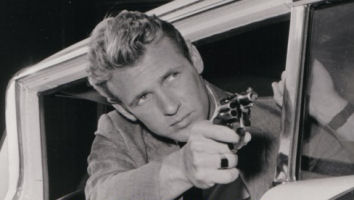