By the time this is posted, the story may be all over. Still, it makes for a good excuse to re-visit one of the best black humor bits from 'Northern Exposure'.....

AS SEEN ON TV" HAROLD RAMIS 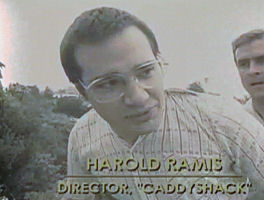 AS SEEN IN:
'Yacht Rock'

AS PLAYED BY:
Ryan Ridley

From Wikipedia:
Harold Allen Ramis (born November 21, 1944) is an American actor, director, and writer, specializing in comedy. His best-known film acting roles are as Egon Spengler in "Ghostbusters" (1984) and Russell Ziskey in "Stripes" (1981), both of which he also co-wrote. As a writer/director, his films include the comedies "Caddyshack" (1980), "Groundhog Day" (1993), and "Analyze This" (1999). Ramis was the original head writer of the television series 'SCTV' (in which he also performed), and one of three screenwriters for the film "National Lampoon's Animal House" (1978).

AS SEEN ON TV: STEELY DAN 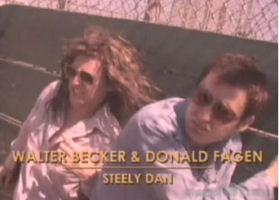 So, last night I finally made the pilgrimage. I saw Steely Dan live in concert at the Beacon Theater in New York!

Steely Dan is my all-time favorite group, ever since "Rikki, Don't Lose That Number". But it was solidified by my inclusion in the 10:30 Club of the Trumbull House (better known simply as T-House) dorm at UConn. (And big thanks to my "cousin" Joel Fontanella for helping me get immersed in their music.)

I've collected albums of rarities like that "Walk It Like You Talk It Or You'll Lose That Beat" soundtrack, and keep an eye out for any TV appearances they might have made. (Usually after the fact, thanks to YouTube.) Earlier this year, I saw the Steely Dan tribute band Beau Bolero at the Infinity Music Hall in Norfolk, Ct.

But I've never seen Becker and Fagan onstage live before.

Usually the reason was that their appearances in NYC just didn't jibe with my days off, or I learned of their upcoming shows too late, only to discover they were sold out. And for quite a few years once I arrived in the Big Apple, it was just a matter of not being able to afford the ticket prices.

I did get to see Donald Fagen when he was a member of the New York Rock and Soul Revue some time ago. But as much as I enjoyed the show, I left the theatre (and I think that was at the Beacon as well) thinking that it just wasn't the same. I really needed to see Fagen and Becker together up there.

During a bathroom break at the Beau Bolero show, a fellow porcelain painter was incredulous that I would be seeing a tribute band and yet never saw the originals. And he was right, it was time to correct that omission in my life.

So there I was, with a great seat (R103) that provided a dead center view of the stage, with nice people on either side of me (a couple from Canada, a couple from Jersey, and a young Costa Rican music student - because of the sound board, our row only had six seats) and a dlunk idiot in front of me unfortunately. But even he couldn't douse my enjoyment of the show. Becker was really laid-back - to the point that at some times he seemed to disappear as he blended in with the surroundings. 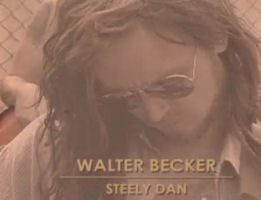 Fagen really did disappear a few times, giving his partner the chance to showcase one of his songs. And for some reason Mr. Nightfly gave me a Larry David vibe throughout the night. (Ever since "Cousin Dupree" came out, I always picture Fagen when they sing about "the skeevy look in your eyes". Maybe that's why he's wearing the shades all the time...) 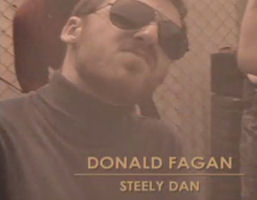 There was a theme each night of the show at the Beacon (which ends its run tonight) - one night was dedicated to "Aja", another to "Royal Scam" I believe. Maybe a Greatest Hits evening. For us it was Internet Requests night, which I think was a con. This was basically a greatest hits night as well - and you'll never convince me that anybody requested the cover of James Brown's "Papa Don't Take No Mess".

I would have thought people who requested songs would have gone for more obscure choices that you hardly ever hear them perform live - "Here At The Western World", for example, and "Gaucho" (although I have seen several videos of that on YouTube.) Apparently they haven't done "Rikki" in many years, which I find surprising, but I also got the impression that Fagen is sick of it. After it was over, he pointed an accusatory finger at the audience and said, "Remember, YOU asked for it!" But what do I know?

I was surprised certain songs were omitted from the line-up: "Barrytown", "Any World", "Bad Sneakers", and especially "Doctor Wu", the song that cemented my love for them. I would have requested "Here At The Western World", but maybe that was too slow for the rocking groove they laid down.

(My Canadian neighbors to the left of me asked me if I requested anything and I said no. I explained that if it didn't get played, I would be upset and probably would look upon it as being a personal insult - especially in light of my belief that I'm the center of the universe. They laughed, thinking I was joking.....)

With the obligatory encore, they played a most O'Bvious exclusion from the main set, especially considering how the line-up wound down - "Kid Charlemagne". That was a fantastic choice to end the night! I just love the story that song tells......

And to send us out into the night (which thankfully remained rain-free despite earlier forecasts), the band - which Becker declared to be the best they ever worked with onstage and I could see no reason to doubt his word - played the theme music for the TV version of 'The Untouchables'!

As far as I'm concerned, that's what Steely Dan is - untouchable.

Should they come around again someday, I won't let the opportunity slip by to see them. I repeat a lot of mistakes in my life, but that won't be one of them.....﻿
﻿Here's the set list for last night's shows (09/22/11):

As for the pictures seen here (since it is an "As Seen On TV" showcase), they're from an online series (I think) called 'Yacht Rock' which was produced under the aegis of Channel 101. I've only seen one episode so far - about Kenny Loggins recording the "Caddyshack" theme song - and it's where I got all but one of these pictures. 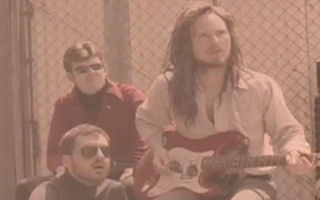 Labels: As Seen On TV, My So-Called Life, O'Bservations, Outside the Box

So focused have I been on getting the Petrie Chronology completed before October 3rd, that I've totally forgotten about the TV Crossover Hall of Fame for September. It occurred to me after I got out of the Steely Dan concert last night; I don't know why. So I better rectify that before the month is over.....

It has been the tradition that September is the month we induct somebody from behind the scenes - producers, writers, etc - who has been instrumental in solidifying the connections of the TV Universe. In the past, the honorees (hopefully they'd see themselves as such) were Norman Lear, Dick Wolf, Anthony Zuiker, Russell T. Davies, Jamie Tarses, Aaron Spelling, Wm. T. Orr, Brandon Tartikoff, Gene Roddenberry, and Hanna & Barbera.

Save for Jamie Tarses (and Lucille Ball, who was inducted in April of 2002 as part of a 4-month consecutive run of Lucy that year in the Hall), it's been a good ol' boys network. So this year, we're doffing our Toob caps to another woman who's been a big influence on the Toobworld mosaic: 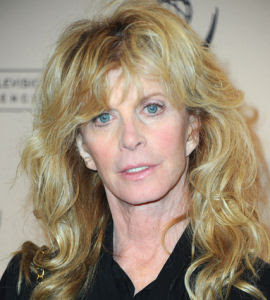 
'Soap' and 'Benson' were the first to forge a link for Toobworld as the character of Benson was originally working for the Tate family before he was spun off into his own show. But it's with that next batch of shows that Ms. Harris really delivered on the crossover aspect that is the building block of our little patch o' Toob. All four of those shows were set in Miami and were somehow inter-connected, mostly through appearances by Sophia Petrillo in them. 'The Golden Palace' was a sequel to 'The Golden Girls'; the doctor in 'Empty Nest' was a neighbor to the 'Girls', and he worked at the same hospital which was the location for 'Nurses'.
And for that effort, we're saluting Susan Harris as our newest member in the TV Crossover Hall Of Fame.
Excelsior!
Posted by Toby O'B at 2:27 PM 0 comments

ON THIS DATE - IN THE TOONIVERSE 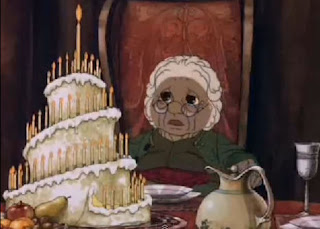 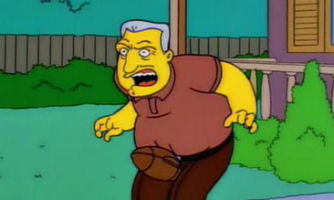 GEORGE C. SCOTT
AS SEEN IN:
'The Simpsons'

AS VOICED BY:
Maurice LeMarche

AS SEEN ON TV: THE ANGEL MORONI AND JOSEPH SMITH JR.

September 21, 1827 – Joseph Smith, Jr. is reportedly visited by the angel Moroni, who gave him a record of gold plates, one-third of which Smith has translated into The Book of Mormon. 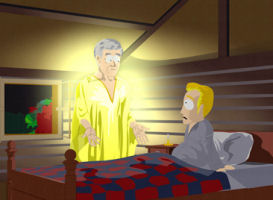 AS PLAYED BY:
Trey Parker and Matt Stone

THE NEW SEASON HIGHLIGHT (SO FAR)

Wasn't it nice of Chuck Lorre & Co. to give us a crossover as Charlie Harper's parting gift?

The best thing about the appearance of Dharma Liberty Finkelstein Montgomery and her husband Greg on the season premiere of 'Two And A Half Men' was that it displayed one of my chief tenets of Toobworld: life goes on in the TV Universe even if we're no longer watching it on screen.

And sadly, it looks as though the karmic bliss in their marriage has been gone for awhile. Greg and Dharma are fast becoming George and Martha over in Albeeville...... 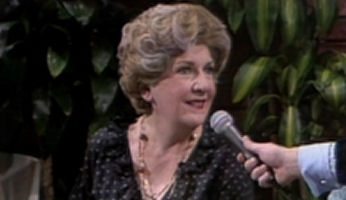 AS PLAYED BY:
Maureen Stapleton

From The New York Times:
Dolores Hope, who gave up her singing career to spend 69 years at the side of her husband, Bob Hope, pursuing philanthropy and projecting with him the image of an enduring Hollywood marriage, died on Monday in the home she and her husband bought in 1940 in the Toluca Lake section of Los Angeles. She was 102.
- Anita Gates

AS SEEN ON TV: SIMON & GARFUNKEL

On this date in 1981 – Simon & Garfunkel reunite for a free concert in New York's Central Park. 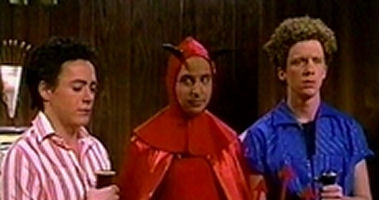 PAUL SIMON & ART GARFUNKEL
(with THE DEVIL)
AS SEEN ON:
'Saturday Night Live' 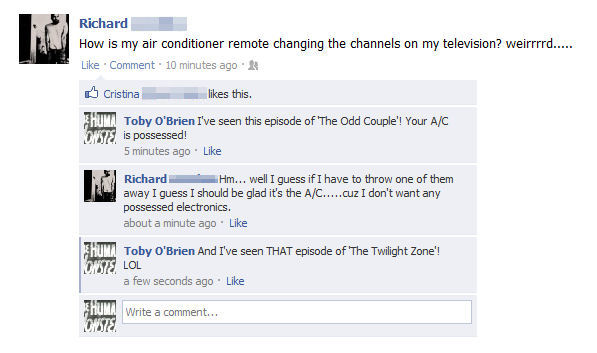 AS SEEN ON TV: "THE PLOT TO KILL STALIN"

Since I'm trying to maintain some semblance of the old format here at Inner Toob, the "As Seen On TV" showcase is our Video Weekend entry.

We offered a portrait of Oscar Homolka as Nikita Kruschev earlier this week to mark the anniversary of the Soviet Premier's visit to America. So today Toobworld Central presents the full 'Playhouse 90' production of "The Plot To Kill Stalin".

And as an added bonus, Cliff Robertson - who sadly passed away last weekend - acted as the host for this production. (And he seemed pretty nervous about it, too.)

Here again is the (mostly) all-star cast for this production:

I hope you enjoyed that classic old chestnut....