TVXOHOF, OCTOBER 2020 - THE BODY OF ROBBY THE ROBOT

Because Halloween caps October, the Television Crossover Hall of Fame usually inducts “monsters” as the monthly showcase.  Now, these could be friendly monsters, like the Munsters, classic monsters as seen in Toobworld (like all of the Frankenstein’s Creature variations), even real-life monsters like Hitler and Lee Harvey Oswald.  On occasion, the TVXOHOF has inducted a monster who is a combination from both Earth Prime and Earth Prime-Time – like Jack the Ripper AKA Redjac from ‘Star Trek’.

And so for this year’s October showcase, we’re going with a less organic “monster”, but one who often is considered “cuddly” albeit clunky. 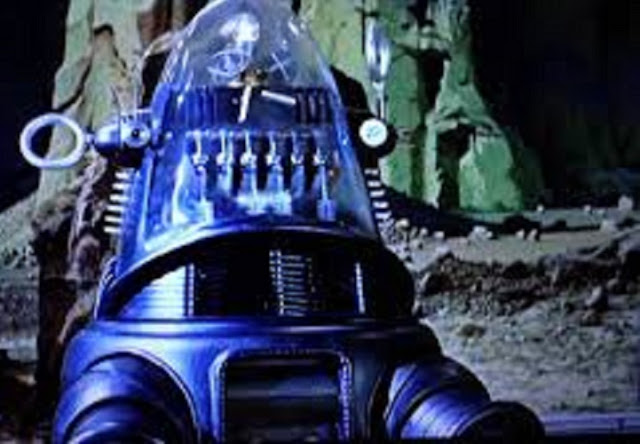 ROBBY THE ROBOT'S CASING
From Wikipedia:
Robby the Robot is a fictional character and science fiction icon who first appeared in the 1956 film “Forbidden Planet”. He made a number of subsequent appearances in science fiction movies and television programs, usually without specific reference to the original film character.

Robby was reused by MGM in “The Invisible Boy” (1957) and then made several further appearances in other films and TV shows during the next few decades; these include episodes of ‘The Gale Storm Show’, ‘The Thin Man’, ‘Columbo’, ‘The Addams Family’, and ‘Lost in Space’ where he battles The Robot.

The original Rod Serling incarnation of ‘The Twilight Zone’ - which was substantially filmed at MGM Studios - made extensive use of props and costumes originally created for “Forbidden Planet”, including Robby. The Season 5 episode "Uncle Simon" (1963) featured Robby, although his appearance was considerably different, combining the familiar body with an alternative head. According to Robby's current owner, director William Malone, the head used in this episode was a prototype created during Robby's original construction. It featured a highly simplified and rather old-fashioned cylindrical "oil can" robot head with stylised 'eyes' (that were illuminated and movable) and a circular 'mouth'; this was enclosed under the distinctively-shaped conical plexiglass dome, but this head's front grille also did not have the blue neon tubes and lacked the rotating external 'ear' pieces seen in “Forbidden Planet”. It is not known whether this internal "oil-can'" head was original, but its rather rudimentary design and appearance is clearly not of same exacting MGM standards that are evident in all other “Forbidden Planet” props, and suggests it may have been custom-made for the filming of this ‘Twilight Zone’ episode. However this version of the prop survives and is currently also owned by William Malone.

In other appearances, Robby usually retained the moving parts inside his transparent dome, although the details of his "brain" and chest panel were sometimes altered; in ‘The Man from U.N.C.L.E.’ episode "The Bridge of Lions Affair", only Robby's head dome was used as part of a regeneration machine. Robby also appeared in the ‘Mork & Mindy’ second-season episode "Dr. Morkenstein", this time representing a character called Chuck (voiced by actor Roddy McDowall) whom Mork befriends while working as a security guard in the science museum where Chuck is on display. Robby was given a major 'makeover' for his appearance in the TV series ‘Project U.F.O.’ (1978). The original head was removed and replaced with a newly constructed "Cyclops" head that had new internal 'brain' fittings, a much squatter (roughly hemispherical) perspex dome, and a large circular glowing green 'eye' on the front, mounted in a protruding triangular panel. The front panel on Robby's torso was also modified with the addition of a new protruding panel, and additional appliances and cables were added to the front of both legs. This 'Cyclops' version of Robby was also used in the 1977 TV series ‘Space Academy’. All appearances of Robby after 1971 are a replica, as the original was retired and on display in a museum.

He was also featured in a 2006 commercial for AT&T.

Robby the Robot was inducted into the Robot Hall of Fame in 2004.

With all of the TV episodes in which Robby appeared, I think it would be ridiculous to consider them all to be Robby.  There’s no way the robot menace in that ‘Thin Man’ episode could be the same robot built by tween genius Stevie Spelberg in the ‘Columbo’ episode fifteen years later.

O’Bviously, the scenario I’m going to suggest won’t satisfy everybody; it can’t be considered canon.  But it works for Toobworld and I’m only concerned with pleasing my needs.  LOL

As was the case in the real world, the televersion of Robert Kinoshita built the original body of Robby for the movie. (We know “Forbidden Planet” exists in Toobworld thanks to references in ‘Cheers’, ‘The Big Bang Theory’, ‘Buffy the Vampire Slayer’, ‘Gilmore Girls’, ‘Six Feet Under’, ‘Doctor Who’ and ‘Fringe.’

But in Toobworld, tele-Kinoshita then made custom copies of that casing to sell. It turns out that it proved to be a popular casing for scientists to house the computer systems they developed, to make their computers mobile. (Stevie Spelberg bought one with funding from the Cybernetics Institute for the seventh incarnation of his MM series of robot.)

Some were maybe bought for cosplay, as seen in that ‘Wonder Woman’ episode; others were ordered only for parts, like that headpiece used for the regeneration machine in ‘The Man From U.N.C.L.E.’.  As I mentioned, they were customized, some with different heads, at least one with no legs.

Tele-Kinoshita even sold use of the miniaturized model to a toy company for a line of toy robots.

Eventually, scientists in the future would hew to the tradition of using that body form.  Aliens on Earth, probably disguised as humans, must have stolen the basic design and took it back to their home planet to use in their creation of that robot which faced off against B9.

Here are the TV appearances which can be considered linked via the theory I suggested above. 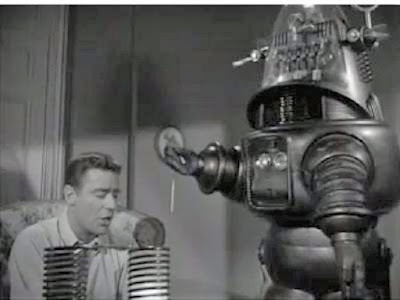 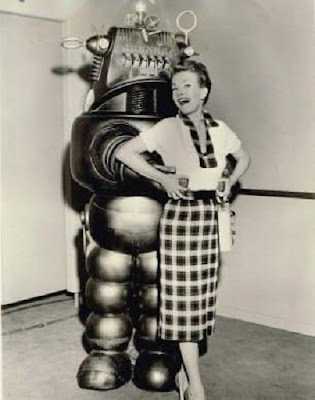 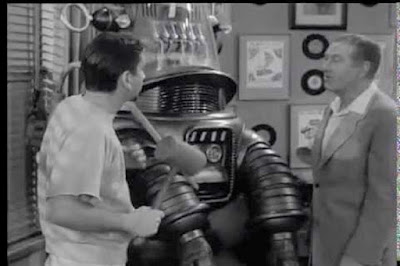 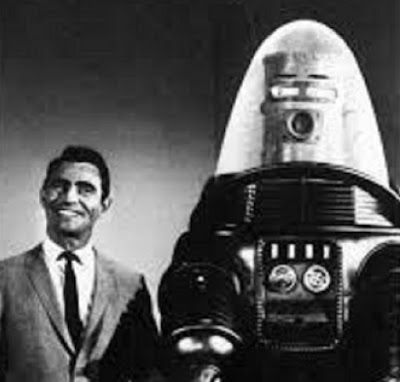 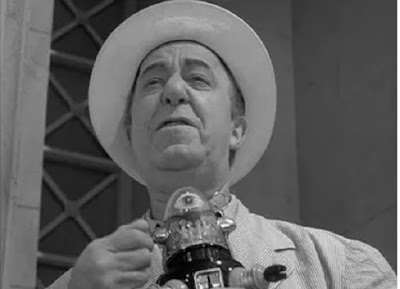 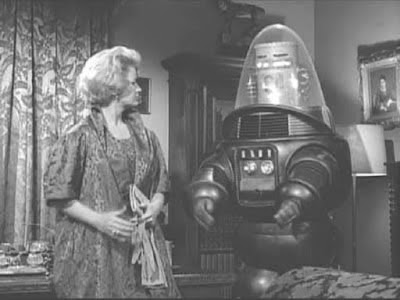 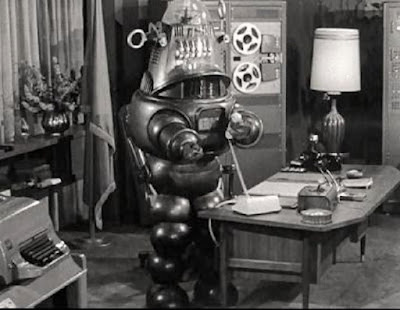 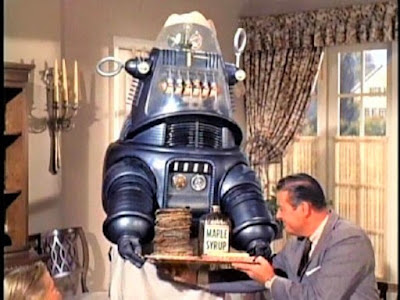 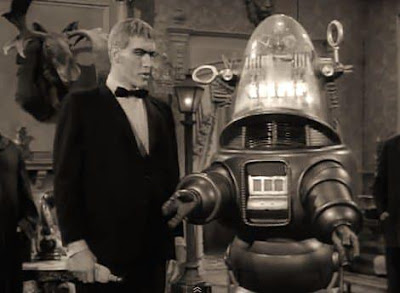 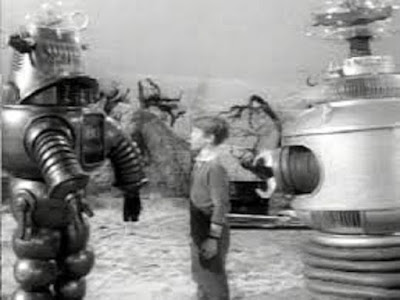 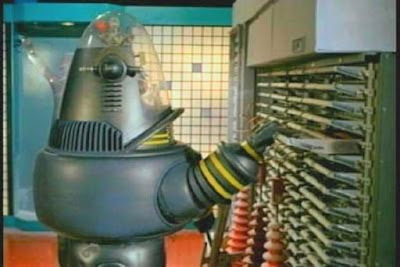 Ultraseven (1967)
A race of Robots called the 'U-Toms' bear Robby's likeness in one episode. 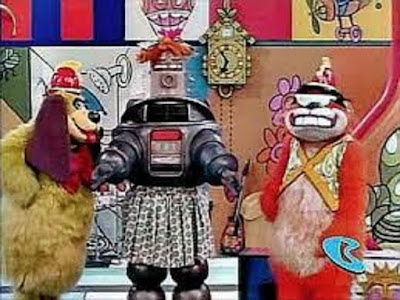 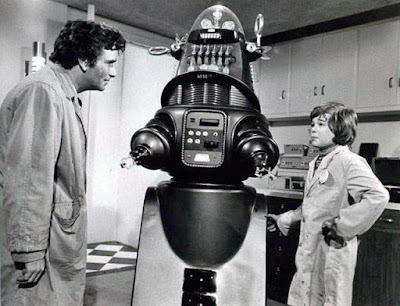 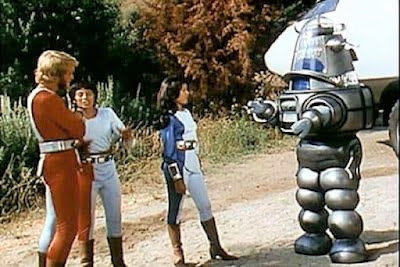 Holmes & Yo-Yo
(1976)
O'Bservation - There is debate over whether or not a Robby copy appeared in an episode.

Music Machine
(1977)
K-tel compilation LP, photographs featured on both the front and back of the cover. In the commercial for the LP, Robby dances to some of the album's songs. 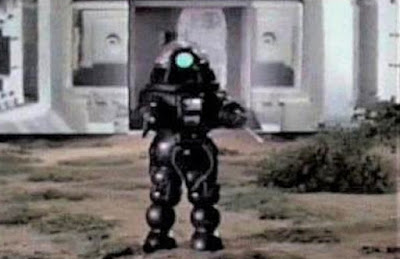 Project U.F.O.
"Sighting 4010: The Waterford Incident"
(1978)
Here, the costume has a different, flatter head and 'brain' elements with a large "Cyclops" eye, a modified torso panel and assorted add-ons to the legs. 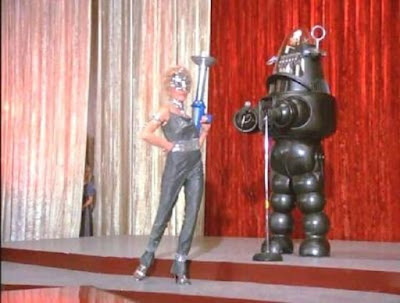 The New Adventures of Wonder Woman
"Spaced Out"
(1979)
O'Bservation - This was one of those times the casing was sold to be a cosplay costume. 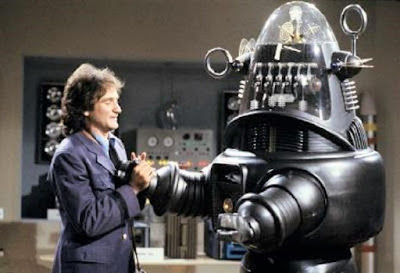 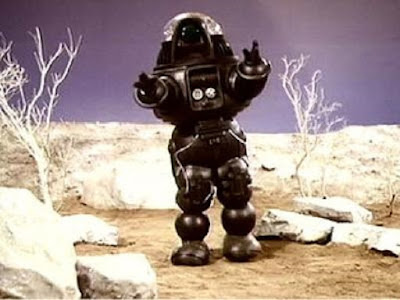 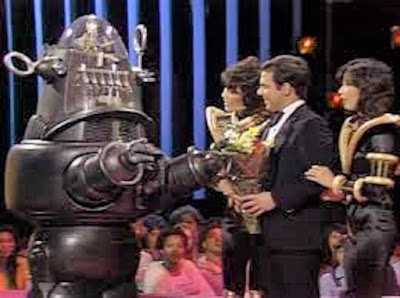 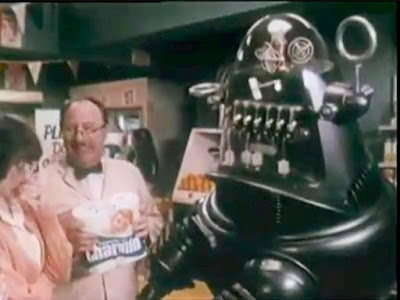 The Love Boat
"Programmed for Love" 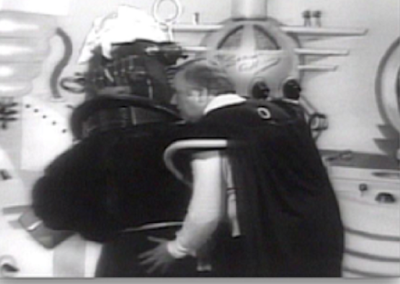 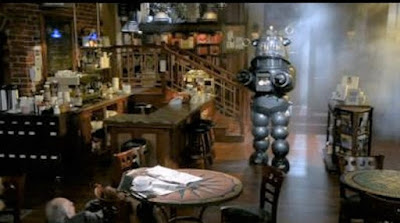 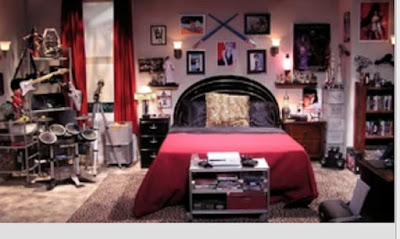 O'Bservation - Supposedly, a statuette of Robby is on the right-side night stand.  It could be of the same toy line as seen in 'The Twilight Zone'. 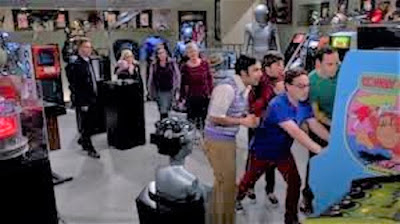 So, it’s not exactly Robby the Robot who’s being inducted.  But whether it's Bix, Smiley, Squeezax, Alphie, Arnold, Chuck, Mildred, or Uncle Simon, the shell which was custom-built for all the examples listed here is based on that original model.

Welcome to the TVXOHOF, "Robby"!