LEAGUE OF THEMSELVES - DANA CARVEY 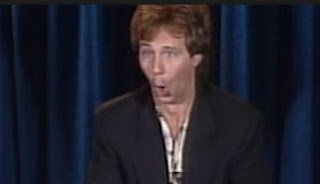 AS SEEN IN:
'The Larry Sanders Show'
"The Guest Host" 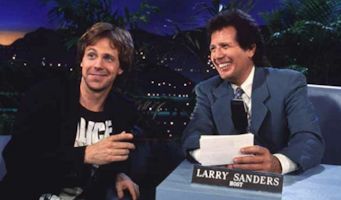 Labels: As Seen On TV, League of Themselves, Life During Prime-Time, Online TV, TV On TV, Video Weekend

ACROSS THE VIEW-NIVERSE: THE DEATH OF LEEMAN BROTHERS?


Andrew Brook submitted this to the Crossovers Forum in Facebook:

In "The Kipper and the Corpse", a guest at Fawlty Towers - a Mr Leeman - dies whilst at the hotel, with (genuinely) hilarious consequences. Guess what happens to another Mr Leeman while flying to Boston in an episode of "Cabin Pressure".... (not much luck, that family!)

"Cabin Pressure" was a radio series starring Stephanie Cole and Benedict Cumberbatch.  So for the purposes of the Toobworld Dynamic, it doesn't work to say that they're related.

But we can say that they're the same man but from two different fictional universes! 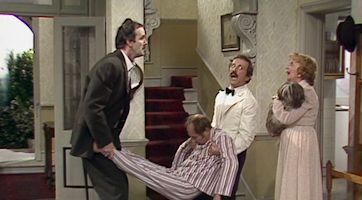 In the 'Fawlty Towers' episode "The Kipper And The Corpse", no first name is given for Mr. Leeman, so why can't it be Hamilton as it was in "Boston" episode of "Cabin Pressure"?

As to the fact that two different actors played the Leemans, it doesn't really matter since we can't actually see Hamilton Leeman in the Radio Universe.  As to the difference in voices?  Maybe he had a head cold and was affected by the high altitude.

LEAGUE OF THEMSELVES - BERN BENNETT 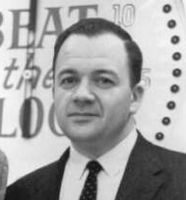 AS SEEN IN:
'The Phil Silvers Show'
"Bilko's Giveaway"

O'BSERVATION:
Bern Bennett was involved with just about every episode, as it was his voice you heard over the end credits for 'The Phil Silvers Show'.  But like the credits themselves, such voice-overs are not considered part of the Toobworld canon.  Unless of course the voice-over interacts wtih people on screen.

But in this episode, Bennett got to be in front of the camera, so he established his official televersion.

Labels: As Seen On TV, La Triviata, League of Themselves, O'Bservations, TV Classique 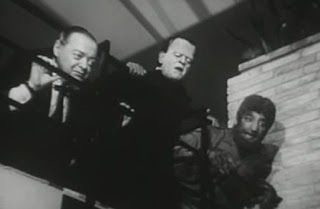 LEAGUE OF THEMSELVES - NICOLE RICHIE 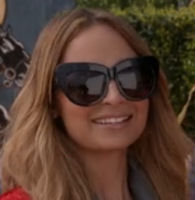 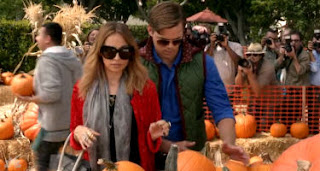 AS SEEN IN:
'The New Normal'
"The Para-New Normal Activity" 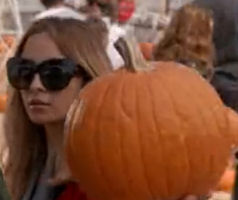 One of these is a vegetable that many people would like to carve up.  The other is a pumpkin.

LEAGUE OF THEMSELVES - YOGI BERRA 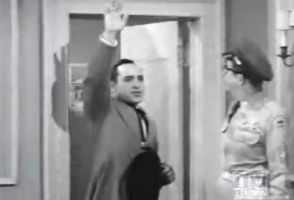 From Wikipedia:
Lawrence Peter "Yogi" Berra (born May 12, 1925) is a former American Major League Baseballcatcher, outfielder, and manager. He played almost his entire 19-year baseball career (1946–1965) for the New York Yankees. Berra is one of only four players to be named the Most Valuable Player of theAmerican League three times and is one of seven managers to lead both American and National League teams to the World Series. As a player, coach, or manager, Berra appeared in 21 World Series. He was elected to the Baseball Hall of Fame in 1972.

Labels: As Seen On TV, League of Themselves, Life During Prime-Time, Tele-Folks Directory, TV Classique, Wikipediaphile

LEAGUE OF THEMSELVES - PHIL RIZZUTO II

Labels: As Seen On TV, Blipverts, League of Themselves, Online TV

LEAGUE OF THEMSELVES - PHIL RIZZUTO 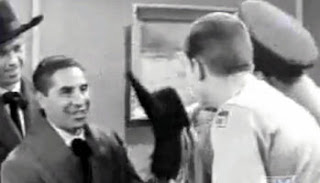 From Wikipedia:
Philip Francis Rizzuto (September 25, 1917 – August 13, 2007), nicknamed "The Scooter", was an American Major League Baseball shortstop. He spent his entire 13-year baseball career with the New York Yankees (1941–1956), and was elected to the National Baseball Hall of Fame in 1994.

After his playing career, Rizzuto enjoyed a 40-year career as a radio and television sports announcerfor the Yankees. His idiosyncratic style and unpredictable digressions charmed listeners, while his lively play-by-play brought a distinct energy to his broadcasts. He was well known for his trademark expression, "Holy Cow!".

LEAGUE OF THEMSELVES - JOHN ROSEBORO 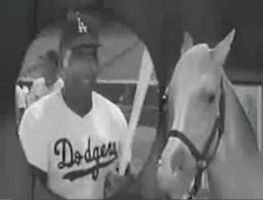 From Wikipedia:
John Junior Roseboro (May 13, 1933 – August 16, 2002) was a Major League Baseball catcher and coach, who was born in Ashland, Ohio.A left-handed-hitter, Roseboro had a lifetime .249 batting average with 104 home runs and 548 RBI in 1585 games played with the Brooklyn and Los Angeles Dodgers (1957–67), Minnesota Twins (1968–69) and Washington Senators (1970). He was a Gold Glove Award winner twice and a four-time All-Starduring a fourteen-year career.On June 14, 1957, Roseboro succeeded Roy Campanella, whose playing career was ended the following January by a paralyzing automobile accident, as the Dodgers' full-time catcher. He also was the Dodgers' starting catcher in the 1959, 1963, 1965, and 1966 World Series, with his team winning the championship the first three times. In the Series, Roseboro was a .157 hitter with one home run and seven RBI in 21 games. The home run was against the New York Yankees in Game One of the 1963 World Series off Whitey Ford—the only home run the Yankee left-hander had yielded to a left-handed batter all season.After completing his playing career with Washington, Roseboro coached for the Senators (1971) andCalifornia Angels (1972–74). Later, he served as a minor league batting instructor (1977) and catching instructor (1987) for the Dodgers. Roseboro and his wife, Barbara Fouch Roseboro, also owned a Beverly Hills public relations firm.Roseboro appeared as a plainclothes officer in the 1967 "Dragnet" TV movie. He also appeared as himself in the 1962 Blake Edwards film "Experiment in Terror" along with Don Drysdale and Wally Moon. 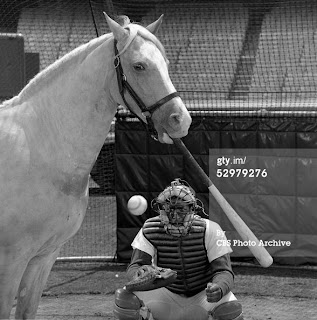 DICK VAN DYKE TALKS ABOUT "BILKO" AND THE YANKEES

LEAGUE OF THEMSELVES - THE YANKEES