AS SEEN ON TV: ALEX SPAULDING 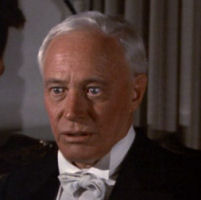 Spaulding was the father of the protagonist, David Spaulding. He was a world-famous concert pianist who was killed by a bombing raid in Poland at the beginning of WWII.

By the way, I should mention at this point (We've only been running this theme for a week now, haven't we?) that we profiled David Spaulding earlier this year, which led to me finally watching this NBC mini-series from 1977.

AS SEEN ON TV: ASHER FELD 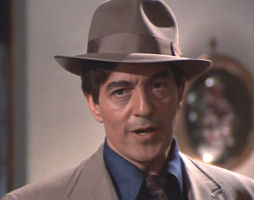 Feld was a member of the Haganah, which was trying to sabotage the negotiations for the exchange.

From Wikipedia:
Haganah (Hebrew: "The Defense") was a Jewish paramilitary organization in what was then the British Mandate of Palestine from 1920 to 1948, which later became the core of the Israel Defense Forces.
In the first years of World War II, the British authorities asked Haganah for cooperation again, due to the fear of an Axis breakthrough in North Africa. After Rommel was defeated at El Alamein in 1942, the British stepped back from their all-out support for Haganah. In 1943, after a long series of requests and negotiations, the British Army announced the creation of the Jewish Brigade Group. While Palestinian Jews had been permitted to enlist in the British army since 1940, this was the first time an exclusively Jewish military unit served in the war under a Jewish flag. The Jewish Brigade Group consisted of 5,000 soldiers and was deployed in Italy in September 1944. The brigade was disbanded in 1946. All in all, more than 30,000 Palestinian Jews served in the British army during the war.

Have a good Shabbat!

AS SEEN ON TV: COLONEL BARTON 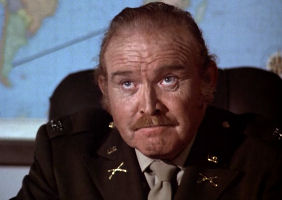 AS SEEN ON TV: WALTER KENDALL 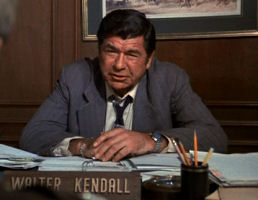 From Wikipedia:
Walter Kendall [is] a clever but rather ill-kept accountant who works with Swanson to arrange the deal. As indicated in the novel, Kendall does not bathe frequently. 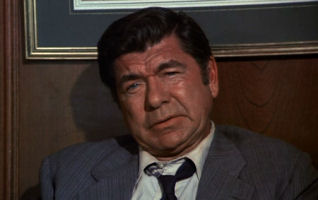 
This week's "Two For Tuesday" showcase features characters played by Rene Auberjenois who both have vocal difficulties...... 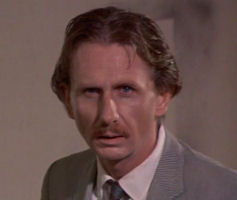 From Wikipedia:
Eugene Lyons [is] a haunted scientist working with Spaulding to check the gyroscope design. Lyons, having struggled with alcoholism, has caused severe damage to his throat and is barely able to speak. He forms a surprisingly tight bond with Spaulding and becomes a valuable ally. 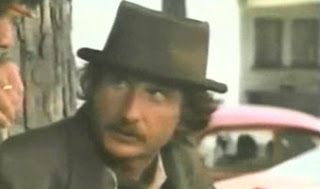 AS SEEN IN:
"Dark Secret Of Harvest Home"

BASED ON:
"Harvest Home"

From Wikipedia:
Jack Stump [is] a local peddler who has only recently arrived [in Cornwall Coombe, Connecticut]. Jack Stump reports that he has seen a ghost in Soakes's Lonesome, a local forest named for the family of moonshiners who live within. Jack Stump is found mutilated, having had his tongue cut out and mouth sewn shut in apparent retribution for trespassing into Soakes's Lonesome.

AS SEEN ON TV: GEOFFREY MOORE 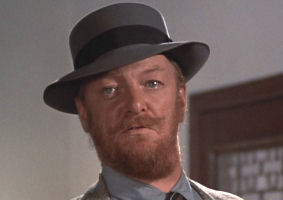 A British undercover operative also working with the Haganah...... 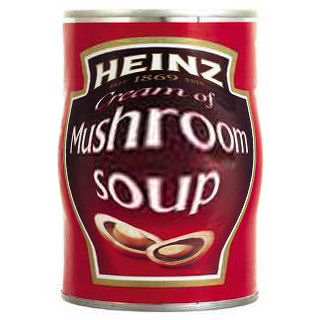 Supposedly this image - or at least normal ones of a Cream Of Mushroom soup can - are an indication that there will be a lack of activity on the blog that posted it. But I only see it being used on Mark Evanier's "News From ME" blog. (Link to the left, my Soup Dragons!)

Technically that will be true of Inner Toob as well for the next two weeks. However, I've already set up the "As Seen On TV" posts for that time period so that at least something new will be available every day. You probably won't even notice that I'se gone. 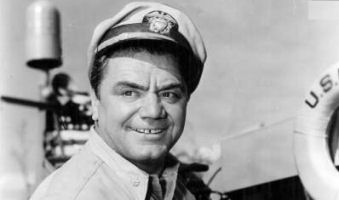 Quinton McHale could be considered a multiversal character - his presence first came to our notice on television, of course. But he was also seen in the movies and even in comic books!

When it comes to the TV Universe, McHale was a lot like TV Crossover Hall Of Famer Lou Grant (March, 2007) in that he was seen in both a comedic as well as a dramatic light. We may know him best from the sitcom 'McHale's Navy', but that wasn't the first time we saw "McHale and his pirates" (as Captain Binghamton would later describe them) on television.

McHale started out as the lead character of a one-hour drama called "Seven Against The Sea" which aired as part of the anthology series 'Alcoa Premiere', hosted by Fred Astaire. (Also in that cast were Gary Vinson as Christy Christopher and John Wright as Willy Moss who were transferred over to the sitcom as well.) 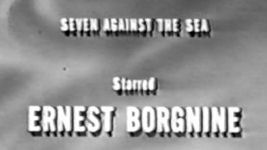 From TV.com:
After his South Pacific PT Boat Base is destroyed in a Japanese raid, a Navy Commander is reluctant to risk the lives of a handful of survivors (Toobworld note: only 18 out of 150 survived.) when a Navy Lieutenant is sent to make the base operational again. 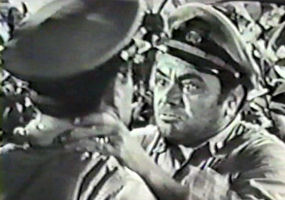 The episode reaches its climax on April 25, 1942. Nearly a year passes before the sitcom joins the Toobworld timeline. In that time, the base on Taratupa was rebuilt and McHale's squadron was replenished with new men - besides Christy and Willy, the PT 73 gained Happy Haines, Tinker Bell, Lester Gruber, Virgil Edwards, Ensign Parker and their houseboy Fuji. The camp got a new commanding officer, Captain Binghamton and his aide, Elroy Carpenter.

As for the others from that original episode, I'd like to think that Lt. Durham got his own PT boat to command and he took Bosun Gallagher to be his first mate and "Plumber" Harris to keep the boat running.

While the sitcom was in production, a theatrically released film was made, also called "McHale's Navy" and starring the original cast. Toobworld Central has absorbed this movie out of the Cineverse and into the TV Universe, along with its sequel, "McHale's Navy Joins The Air Force". (However, that doesn't count in Quinton's qualifications for entry into the TV Crossover Hall Of Fame since Ernie Borgnine didn't appear in it.) 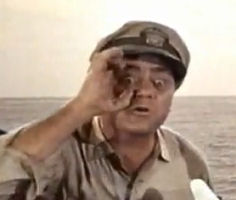 There is a third movie - a remake - from the late 1990's, in which Tom Arnold played McHale. Borgnine does make a cameo appearance in the film as McHale's father, although he's referred to by a code name - "Cobra". However, unlike with James Garner in the movie "Maverick", we are not claiming that he is the original Quinton McHale. Let that movie stand as belonging solely to the Cineverse. Toobworld Central can be magnanimous about it since the TV Universe already purloined the earlier two movies.

I'm surprised the 'McHale's Navy' gang didn't appear in commercials for their sponsors like the casts of other sitcoms did back in those days. But if McHale had been in such a commercial, it would have added to his qualifications.

As it is, he makes the grade:

It has been our policy this year that those who are deserving of membership, but who have passed away before they can be inducted, will automatically be granted entry into the Hall.

Sadly, that has happened with the passing of Ernest Borgnine.

AS SEEN ON TV: ERICH RHINEMANN 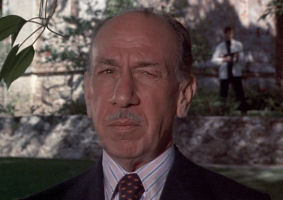 From Wikipedia:
Erich Rhinemann – the devious German industrialist dedicated to carrying out the exchange. 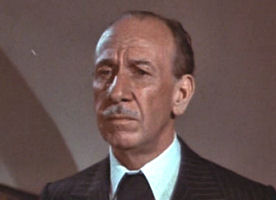 The Germans select the exiled industrialist Erich Rhinemann to supervise the exchange [of gyroscopes for industrial diamonds] at their end. He is a clever choice because, although he is Jewish, he is committed to German victory and believes that he will be welcomed back after a German victory. Rhinemann is immensely influential and powerful in Buenos Aires. 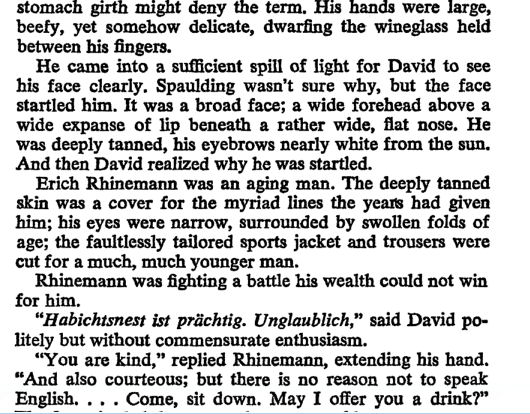