Thanks to the bracketing videos, the X-Men of the Cineverse also exist in Toobworld.......

From the New York Times:
Prince, the songwriter, singer, producer, one-man studio band and consummate showman, died on Thursday at his home, Paisley Park, in Chanhassen, Minn. He was 57.

His publicist, Yvette Noel-Schure, confirmed his death but did not report a cause. In a statement, the Carver County sheriff, Jim Olson, said that deputies responded to an emergency call at 9:43 a.m. “When deputies and medical personnel arrived,” he said, “they found an unresponsive adult male in the elevator. Emergency medical workers attempted to provide lifesaving CPR, but were unable to revive the victim. He was pronounced deceased at 10:07 a.m.”

The sheriff’s office said it would continue to investigate his death.

Last week, responding to news reports that Prince’s plane had made an emergency landing because of a health scare, Ms. Noel-Schure said Prince was “fighting the flu.”

Prince had a presence in Toobword, which included appearances in the Super Bowl half-time show and on 'Saturday Night Live'.  But these are the two main reasons why his televersion could claim to be a part of Earth Prime-Time:

Good night and may God bless Prince.  Flights of angels and all that..... 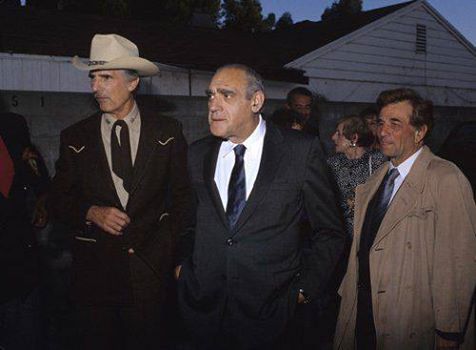 I haven't done a "Fanficcer's Friend" post in some time, so there's no time like the present!

(From left to right)

McCloud was a deputy marshal on loan to the NYPD as an observer who ended up solving quite a few murders and robberies over his time there.  Eventually he returned to Taos, New Mexico and became a United States Senator from the state.

Working out of the 12th Precinct in the Village, Fish eventually retired and became a foster father to a bevy of kids.

Columbo worked the Homicide division of the LAPD and was still on the job into his seventies.  He may have never retired before he passed away.

Columbo was originally from New York City himself, so there would be the genesis of this crossover fanfic:

This takes place in the late 1970s.  I would peg it to after the final NBC episode of 'Columbo', "The Conspirators".

Columbo returns home and decided to drop into the 12th precinct where he used to work when he was a patrolman.  He picks a day when another former cop at the 12th has dropped in - Phil Fish.  His reasons: to hear a speech by Marshal Sam McCloud who is returning to New Mexico, and hopefully give the kids he has in tow a new appreciation for law enforement.

From there, with the three detectives brought together, a fanficcer can come up with any number of crimes they could investigate.  But I think it would have to be a murder, perhaps committed right in front of the three of them as they are gathered in the same area.  (Columbo is pestering McCloud about his own experiences as a "fish out of water" being a New York cop working in Los Angeles.)

For the Fish angle, it should be something off-beat and humorous, perhaps starting with him only being in the vicinity of the crime scene because he was on line for the small bathroom available to visitors.  Maybe the cause of death should be something darkly humorous and unique.

And as for McCloud, plenty of action scenes - one last hurrah as he rides a horse through the City (perhaps with Columbo on board as well?)  And maybe grabbing onto a helicopter one last time.

If this picture does inspire you to write up a fanfic crossover of the three, with your own ideas, whatever, let me know.  I'd love to read it!  And if you like, I could even give it a showcase here at Inner Toob!