We inducted the televersion of ‘The Twilight Zone' last month into the Television Crossover Hall of Fame, so what Toobworld TV show could we showcase now which would be perfect for the end of October? 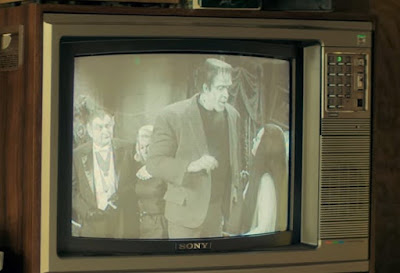 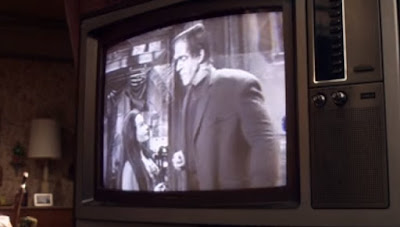 THE MUNSTERS
With the induction this month of Eddie Munster, every member of that family is now also a member of the TVXOHOF, so this only makes sense for the Halloween season. 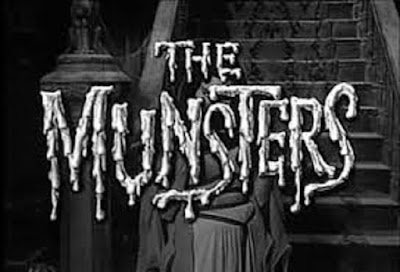 ‘The Munsters’ is an American sitcom depicting the home life of a family of benign monsters starring Fred Gwynne as Frankenstein's monster-type head-of-the-household Herman Munster; Yvonne De Carlo as his vampire wife, Lily Munster; Al Lewis as Grandpa, the over-the-hill vampire who relishes talking about the "good old days"; Beverley Owen (later replaced by Pat Priest) as their teenage niece Marilyn Munster, whose non-monster persona made her the family outcast; and Butch Patrick as their half-vampire, half-werewolf son Eddie Munster.
The series was a satire of both traditional monster movies and the wholesome family fare of the era, and was produced by the creators of ‘Leave It to Beaver’. It ran concurrently with the similarly macabre themed ‘The Addams Family’ (which aired on ABC) and achieved higher figures in the Nielsen ratings. 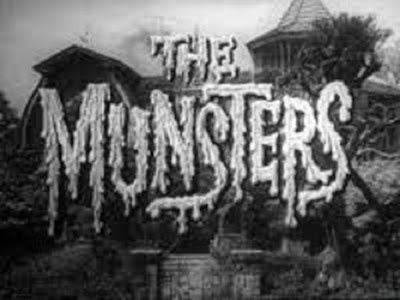 In 1965, ‘The Munsters’ was nominated for the Golden Globe Award for Best Television Series, but lost to ‘The Rogues’. In the 21st century it received several TV Land Award nominations, including one for Most Uninsurable Driver (Herman Munster). 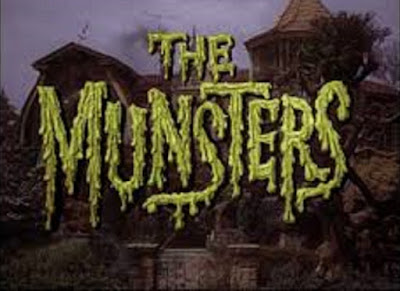 The series originally aired on Thursday at 7:30 pm on CBS from September 24, 1964, to May 12, 1966; 70 episodes were produced. It was cancelled after ratings dropped to a series low, due to the premiere of ABC's ‘Batman’, which was in color. Though ratings declined by the end of its initial two-year run, ‘The Munsters’ found a large audience in syndication. This popularity warranted a spin-off series, as well as several films, including one with a theatrical release. 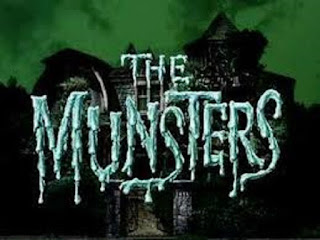 On October 26, 2012, NBC aired a modern reimagining of ‘The Munsters’ called “Mockingbird Lane” as a pilot. The series failed to be picked up by NBC due to disagreements on the dark nature and inconsistent tone. 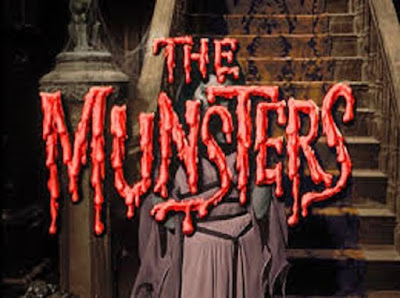 As a TV series within Toobworld, it was a natural about the family who lives in Toobworld.  It can’t be a documentary series like the groundbreaking one about the Loud Family, as we know from two of the listed references below in which the actors are mentioned.
Of the many references in other TV shows about ‘The Munsters’, I’m only using those which could be definitely linked to the televersion of the TV show and not to the actual family living in Earth Prime-Time.  (And if it’s a toss-up, I’m going to assume they are talking about the actual Munsters.)

Here are the references which qualify the Toobworld TV show about the Munsters to become a member of the Television Crossover Hall of Fame.

We’ll begin with the strongest verifications that it exists in Toobworld as a TV series: 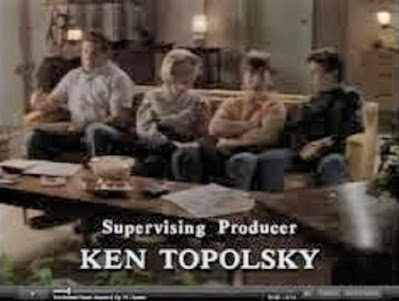 The Wonder Years:
Buster (1991)
The Arnolds watch an episode of "The Munsters." 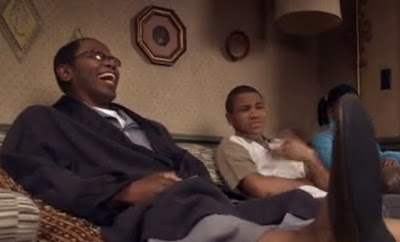 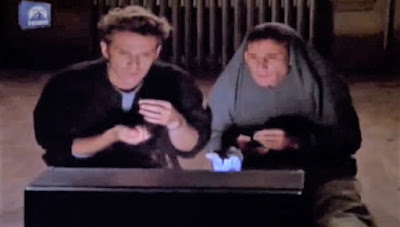 Caroline in the City:
Caroline and the Desperate Cat (1997)
Richard and Charlie watch and discuss "The Munsters". 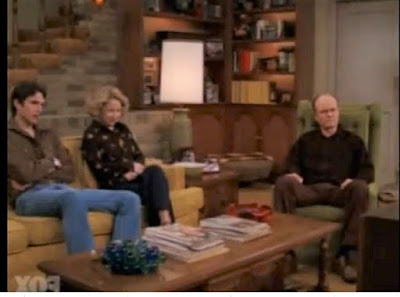 That '70s Show:
Down the Road Apiece (2005)
Kelso, Red and Kitty watches TV. Kelso tries to explain the show, Red hates it.

The Twilight Zone:
Six Degrees of Freedom (2019)
The Bradbury mission picks up an audio transmission of an episode of ‘The Munsters’ (1964) en route to Mars.

Scrubs:
My Point of No Return (2007)
the Janitor says he's old because he's the only to have seen this show.

O’Bservation – Michael was a figment of Dr. Bob Hartley’s imagination.  So if Dr. Hartley and George Lopez dreamed of ‘The Munsters’ in their respective sitcoms, then it was a sitcom for them.

Full House:
Joey Gets Tough (1988)
Jesse mentions the show while explaining that no family is perfect.

The Kids Are Alright:
Low Expectations (2019)
Joey says The Brady Bunch vs The Patridge Family debates is like this show vs. The Addams Family.

Psych:
Lassie Jerky (2013)
Shawn enrolls Gus in a class on hermeneutics, which he believes is the "study of ‘The Munsters’."

Psych:
He Dead (2009)
Gus says that a street address mentioned by Shawn is actually that of the Munsters.

The Nanny:
Franny and the Professor (1995)
Fran mentions the show by name.

EastEnders:
Episode dated 19 October 2015
Elaine and Linda are talking about Halloween. Linda says, "You know we like to dress up as The Munsters every year". Elaine replies, "That was old-fashioned 20 years ago!"

The following references could go either way, but I can’t be sure:

Happy Days:
The Other Guy (1981)
Referenced by Marion Cunningham

Cheers:
How to Win Friends and Electrocute People (1988)
Mentioned by name.

One Foot in the Grave:
Secret of the Seven Sorcerers (1993)
Mentioned by Patrick.

Tales from the Crypt:
People Who Live in Brass Hearses (1993)
Mentioned in dialogue

The Nanny:
A Kiss Is Just a Kiss (1995)
Fran mentions the characters, Lily and Herman, by name.

The Goldbergs:
The Beverly Goldberg Cookbook: Part 2 (2019)
Mentioned by Barry. 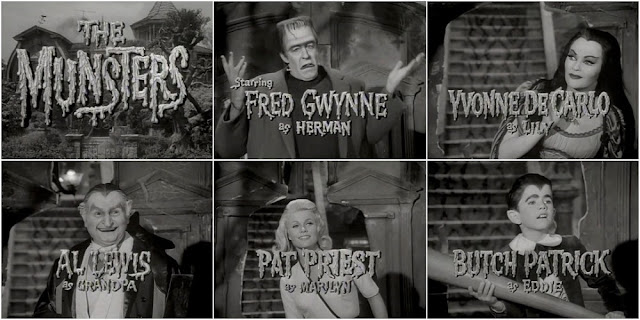 A word of warning to visitors to the TVXOHOF:
Every Toobworld TV series which has been inducted has their own soundproof viewing room.  There you can watch non-stop episodes of those shows.  BUT!  The episodes which make up the Toobworld versions of the shows we know might not be episodes which were available to the Trueniverse audience.

And the actors who played the roles in Toobworld might not look exactly like the actual “people” being portrayed.  At least we know that in the case of ‘The Munsters’, Herman and Lily were portrayed by the televersions of Fred Gwynne and Yvonne DeCarlo....