4/04
Since today is one of "The Numbers" days ('Lost'), here is one of the numerals in the Valenzetti Sequence to be found in other shows..... 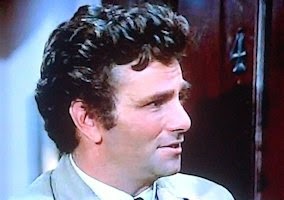 'COLUMBO'
"DAGGER OF THE MIND" 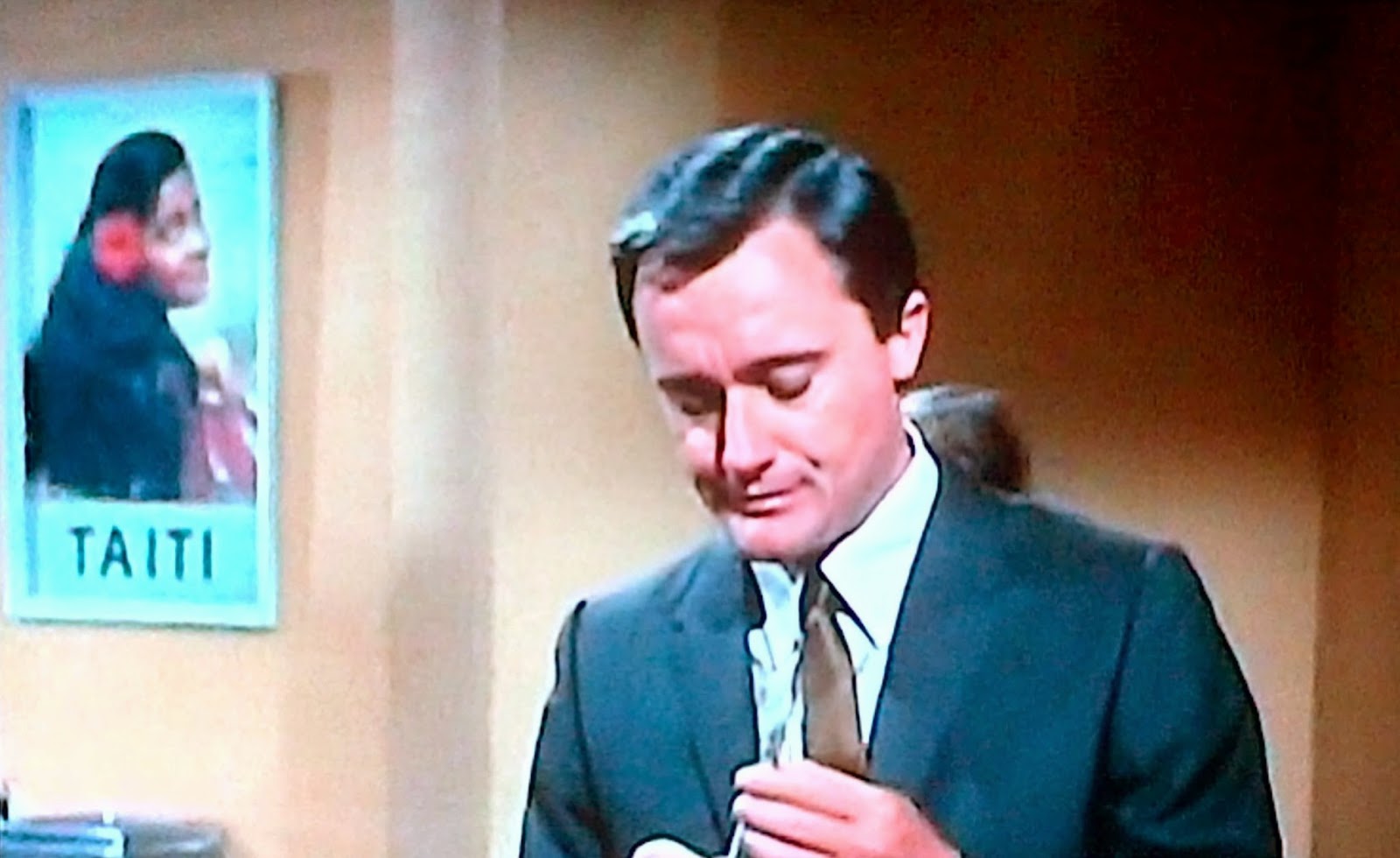 That poster in the background reminded me that even though I might be watching an American TV show, even Toobworld speaks more than just English.  We're not dealing with universal translators here.

Taiti would be the spelling in several languages for the largest island in the French Polynesian islands, which Americans would know as Tahiti. 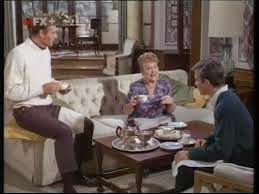 Harriet Cooper was Bruce Wayne's aunt but his youthful ward Dick Grayson considered her as his aunt as well and addressed her as such, which she accepted.  (But she was never aware of the fact that they were the crime-fighters known as Batman and Robin.) 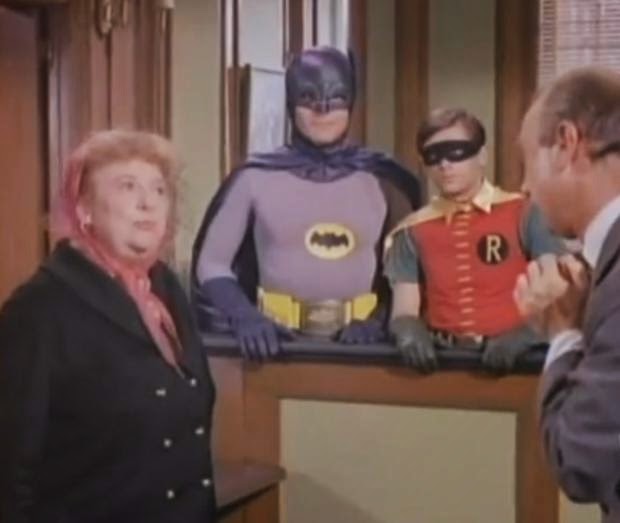 She was the sister of Bruce's mother and although she rarely talked about her family, Miss Cooper had another sister as well - named Miriam.

Miriam Cooper married Harry Baxter and moved with him to Ohio where Harry built an empire in the plumbing fixtures business.

They had a son who grew up to be a brilliant industrialist bent on taking over the entire world.  Calling himself "Alexander The Greater", Baxter embarked on this madman's quest with an added challenge: to break each of the ten commandments as he proceeded.

And one of those commandments O'Bviously involved his parents - "Honor Thy Mother And Father".  Alexander the Greater had the senior Baxters kidnapped and chained up in a rock quarry where they had to work like slaves. 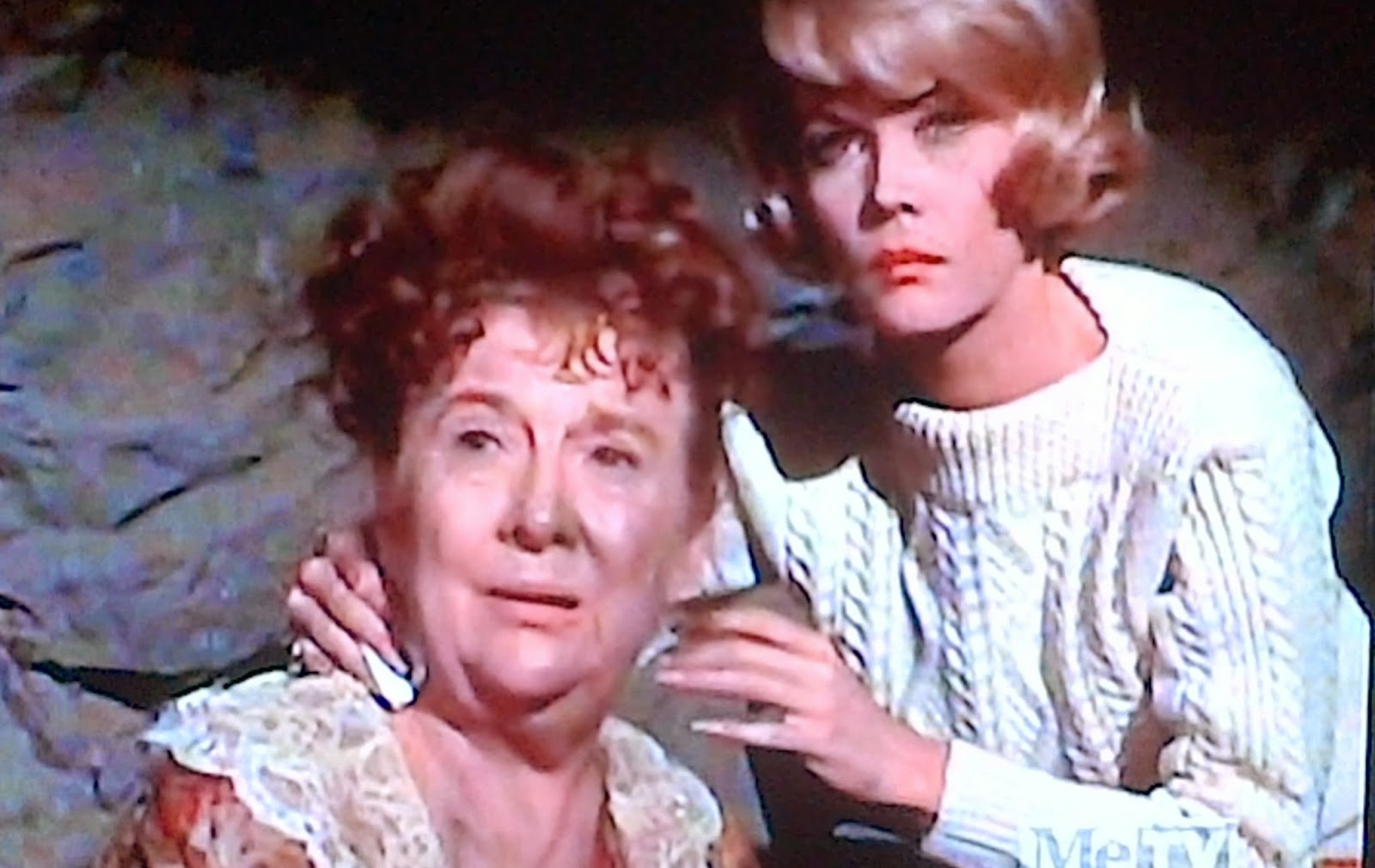 Luckily for them, U.N.C.L.E. agents Napoleon Solo and Illya Kuryakin (with help from Alexander's soon to be ex-wife Tracey Alexander) were able to track them down and rescue them.

Harriet Cooper must not have been in frequent contact with her sister Miriam Baxter or she would have become concerned after not hearing from her in months.  And then she would have involved Bruce in the matter and you know what that means - the Dynamic Duo would have been on the case! 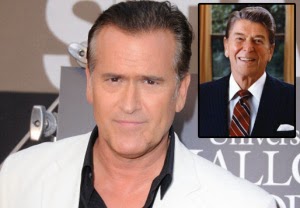 Proving that it won't fit into any one groove, the second season of 'Fargo' will be taking place back in 1979.  Patrick Wilson will be playing Lou Solverson, who was portrayed by Keith Carradine in the modern day iteration of the first season.  Also in the cast are Cristin Milioti, Nick Offerman, Ted Danson, and Jean Smart.  But the big Toobishy casting news?  Bruce Campbell, the "Chin" himself, will be playing Ronald Reagan, the Republican candidate for President.

I'm assuming it will be a one-shot guest appearance as Reagan makes a campaign stop in town, but who knows? According to FX CEO John Landgraf: "Some of the characters have some interactions with him. And some of his movies are also a part of the show.  A lot of what it’s about is the cultural transformation that was going on at the time."

Apparently Reagan's campaign fits into the narrative themes for 'Fargo', according to Landgraf.

This would mark Reagan's third fictional appearance in Earth Prime-Time; the other two were in "Bloodlines", an episode of paranois-infused alien invasion timeline series 'Dark Skies', and as just his voice in "Smaller Than Life", an episode of 'Magnum, P.I.'

BIRTHDAY GREETINGS TO MY BROTHER BILL!

I'm not sure I would have checked out the Netflix series 'Marco Polo' had my brother Bill not recommended it so enthusiastically, but it became my "binge" show back in January and I'm not one to binge watch TV. As far as I'm concerned, this series - which will be getting a second season - is THE portrayal of Kublai Khan in the main Toobworld.

The only other Kublai Khan I can think of that belongs to the main Toobworld would be the emperor as seen in the story from the adventures of the first incarnation of the Doctor in 'Doctor Who'. But he was such a frail old man, I have to figure the TARDIS had utilized its ability to travel to relative dimensions in space. (He couldn't be Kublai Khan from later in life, which we can excuse for casting reasons based on character aging, because Marco Polo was still at court.)

Today is my brother Bill's birthday, so I wanted to share this alternate dimension's depiction of Kublai Khan's grandfather, Genghis Khan, to mark the occasion.  I figured he deserved something dignified and refined........

VIDEO SUNDAY - LASSIE AND THE C-CLAMP


This was recently in Dave Barry's blog:

The Blog has oft remarked (in print and otherwise) that we think collies are smart because we grew up watching 'Lassie'. Today the s.b. was spinning the dial and found an episode of the early show with Jon Provost as Timmy. In this episode, June Lockhart, aka Mom, had her foot caught in a cougar trap (for obvious reasons). Lassie heard her calling and came a'runnin'... This is the actual dialogue that June Lockhart had to say to her co-star, a dog:"Do you remember the c-clamp that the trapper brought? I think I left it on the kitchen counter. Go get it, girl! And hurry!"That is all.Posted by judi on March 7, 2015 at 12:26 PM

If I ever saw that episode when I was a kid, I don't remember it.  I probably was so young that I didn't have any problem in accepting the premise.

Since then, I've seen that particular scene in a TV retrospective special and on its own it is the most ridiculous concept that Lassie should understand about C clamps.

But in the TV Universe, I use it as a good example of dogs being the reincarnation of humans and who still have a retention of their human intelligence.

So it works for Toobworld.