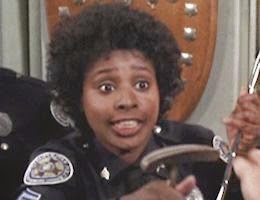 From 1984 to 1989, Marian Ramsay was best known for playing Laverne Hooks in the "Police Academy" movie franchise.
These movies get pulled into the TV Universe thanks to the 1997 spin-off TV series by the same name, even though many TV shows would make reference to the movie series.  (O'Bviously the exploits and antics of that original class of cops were deemed worthy of a film treatment.)

By the third movie, Laverne Hooks had become a sergeant on the force.

Hooks wasn't seen in the TV series (nor in the "Mission To Moscow" movie sequel in 1994), but Toobworld Central is ready to claim that she still made plenty of appearances in Earth Prime-Time to qualify (at least this year!) for the Television Crossover Hall Of Fame. 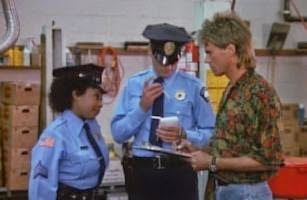 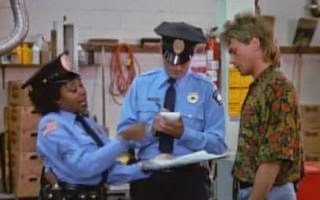 'The Nanny'
Woman in Audience
"The Strike"

The Toobworld Dynamic will absorb videos as well as movies and online content into the TV Universe, and so Marian Ramsay's appearance as Officer Hooks in John Virgo's 1993 snookers video "Playing For Laughs" counts toward her resume.  Later that year, she got involved with Al and Steven Mitchell in the "American We" episode of 'Daddy Dearest'.

(She was only billed as Cop #2 though, but we're going to stick to the claim that she was Laverne Hooks.  Especially since Cop #1 was played by Bubba Smith, who HAD to be Moses Hightower in this episode.)

In 1994, Laverne must have gone to New York City on vacation, which is why we saw her in the theater audience for the musical version of "Norma Rae" during a hotel strike.

Nearly a decade later, Hooks was working as a motorcycle cop who was somehow involved with some missing kids during the grand opening of the family's gourmet restaurant.

And finally, over in the stop-motion world of the Toob, her "Claymation" avatar appeared in an episode of 'Robot Chicken'. 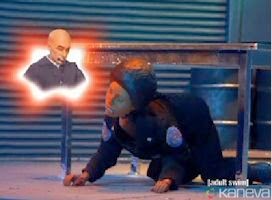 This is the fifteenth anniversary of the TVXOHOF, which is why I can get away with inducting Laverne Hooks into the Hall - I'm celebrating!  And what I say, goes!


Bob Hoskins, the British actor who recently passed away at the age of 71, was responsible for bringing several BookWorld citizens to life in the TV Universe (although not necessarily in the dimension of Earth Prime-Time.)

Here are some of them: 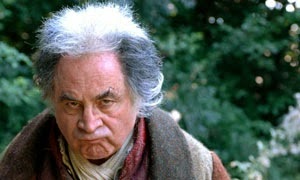 Mr. Badger
"The Wind In The Willows"

I don't think any version of the Kenneth Grahame classic belongs in Earth Prime-Time.  But Hoskins' portrayal was the latest and a case could be made for it, I suppose.

But it all depends on how it was interpreted with its first TV production:  Although it is likely to be lost due to it never being recorded, Kenneth More's portrayal of Badger in the 1946 teleplay of "Toad Of Toad Hall" would be the first incarnation of Badger and would likely to be found in the dimension of ToobStage. 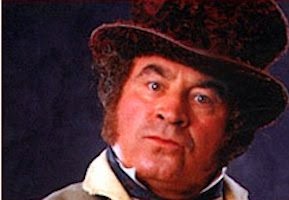 To be found in some alternate TV dimension.  It will be the second appearance of Mr. Micawber on television, in 1956, that will be the official portrayal of the character for Earth Prime-Time.  Hilton Edwards played Micawber in a thirteen episode mini-series in 1956.  (The first time Micawber appeared on our TV screens was in a two part production of "David Copperfield" for 'Robert Montgomery Presents', starring J. Pat O'Malley.) 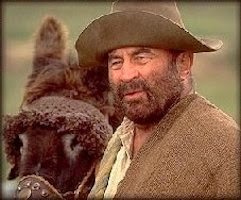 This would be an alternate Toobworld because the Spanish mini-series 'El Quijote' must have priority. 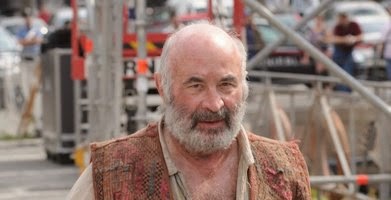 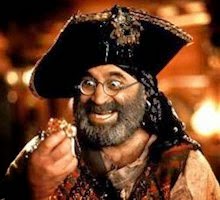 Since Hoskins also played Smee in the movie "Hook", then "Neverland" would be found in one of the TV Movie Borderlands..... 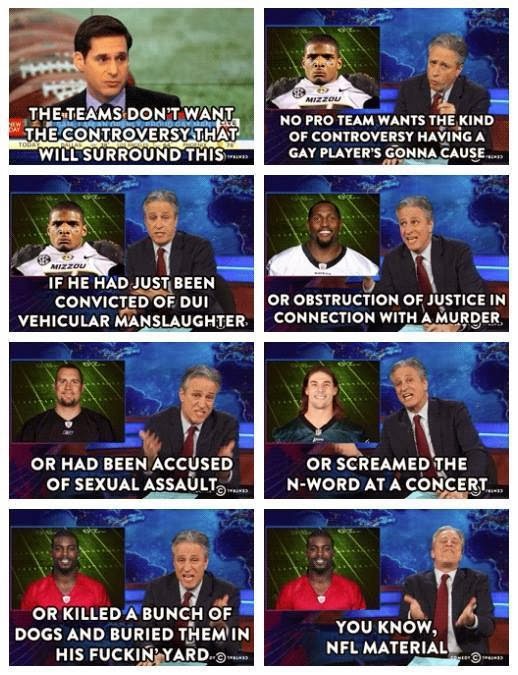 Labels: Online TV, Outside the Box, Reali-TV, TV timeline, Twipped from the Headlines 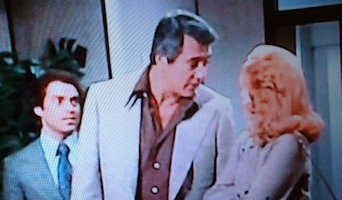 A reporter had been pestering/dating/tagging along with San Francisco Police Commissioner Stuart McMillan during his investigation into two murders that occurred on a Hawaii-bound Western National jet plane.  But Commissioner McMillan drew the line when it came time for him to interrogate the second-in-command at the airline and who now held control of the corporation once more.....

COMMISSIONER McMILLAN:
"What transpires now, Miss Marple,
is official business to which you are not invited."

Stuart McMillan and Jane Marple both exist in Earth Prime-Time.  Miss Marple, in fact, has counterparts in several TV dmensions (not to mention in BookWorld and the Cineverse!)

But her exploits were chronicled by Dame Agatha Christie in a series of books and short stories which became famous around the world.  And they are written in such a way that many readers don't even realize she was this little old lady who once lived in the village of St. Mary's Mead.

Whether or not Commissioner McMillan knew through his police work that she was a real person is irrelevant.  The point was only to prove that this was not a Zonkable offense.


Mark Wahlberg is one of the executive producers for a remake of a 1980's angelic drama.

'Highway To Heaven' starred Michael Landon as angel Jonathan Smith, who traveled across the country helping mortals with problems in their lives.

But with this new A&E remake, the network's general manager, David McKillop, announced that it would be edgier and set in the contemporary time of the 21st Century.

More than likely, if this remake follows tradition, then the new angel will have the same name as the original. Normally that would automatically send the show into an alternate TV dimension.

But what if angels - like pan-dimensional demi-gods - can change their physical appearance?

The show could then remain in the main Toobworld.  However, if they recast the role of ex-cop Mark Gordon, rather than give Jonathan a new partner, off it goes to an alternate dimension!

If the angel gets a new name, no problem - Earth Prime-Time it is!

If it does have to go to another dimension, that description of it being "edgier" might make it a candidate for Evil Toobworld...... 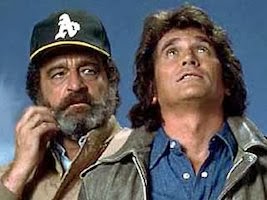 Labels: By Any Other Name, Game of the Name, Recastaways, Tele-Folks Directory, TV Classique, Twipped from the Headlines

THE HAT SQUAD - REMEMBERING TYRONE POWER ON HIS 100th BIRTHDAY


Today would have marked the 100th birthday of Tyrone Power.  He lived to be only 44, having died of a heart attack in 1958 while in Madrid.

In his career, Power contributed only one character to the greater TV Universe - that of Jean in an adaptation of August Strindberg's "Miss Julie".  The play was presented in 'Armchair Theatre' December 23, 1956, two years before he died.

This production of "Miss Julie" undoubtedly would have been anchored to the TV dimension of ToobStage in which Life strays no farther than endless recreations of certain events with an artificial reality of theatricality.

I couldn't find any video clips of that performance, nor even any pictures, but I did find this League of Themselves appearance on 'What's My Line' (with the added bonus of Wally Cox as the guest panelist......)

For the Toobworld Dynamic, it will always be the "Life During Prime Time" in TV series which will take precedence in consideration for inclusion into Earth Prime-Time.  So with individual TV productions centered around historical figures, each one of those can be shipped off to alternate TV dimensions of their own, perhaps sharing the same space with other TV movies and mini-series which feature variations of other historical recreations.

During his seemingly all-too-short career as an actor (at least that's how it feels to me), Bob Hoskins - who just passed away at the age of 71 - contributed many historical portrayals of the great movers and shakers from the Trueniverse.  Many of them were portrayed previously and since by other actors and for that reason each of them must move on to other TV dimensions.  And again, despite the fact that Hoskins acted out each of these roles, many of these TV movies could share a TV dimension with each other.  (For instance, it's pozz'ble, just pozz'ble, that Hopkins' portrayal of Churchill and Mussolini could occupy the same Toobworld.  I don't want to risk making that same claim for his roles of Pope John XXIII and Kruschev since there's a woman named "Rada Kruscheva" among the characters in "The Good Pope".  Rada was the daughter of Nikita Kruschev, so it's likely that if she showed up in "The Good Pope", wouldn't her father have done so as well?  (The IMDb is scant on character names for the listed cast of "The Good Pope".)  But perhaps "The Good Pope" shares the same world as "Mussolini And I", "World War II: When Lions Roared", and even "Noriega: God's Favorite".....)

Here are the main historical figures played by Bob Hoskins in the TV Universe: 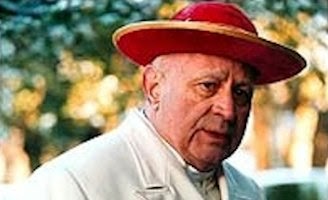 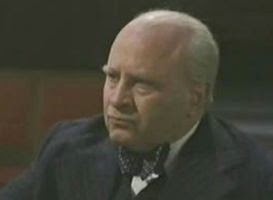 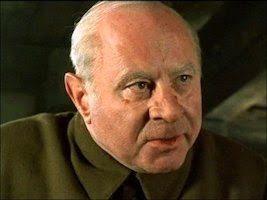 NIKITA KRUSCHEV
"ENEMY AT THE GATES" 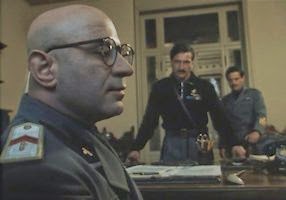 BENITO MUSSOLINI
"MUSSOLINI AND I" 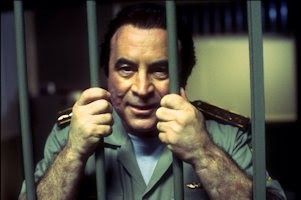 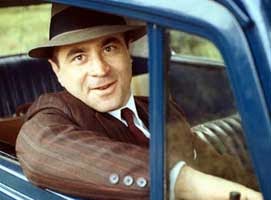 Bob Hoskins, a British actor whose powerful screen presence earned him a reputation as "the Cockney Cagney" and who, at 5 feet 6 and with a face he likened to a squashed cabbage, gave the short, bald men of the world a reason to swagger, has died. He was 71.

Hoskins, who was diagnosed with Parkinson's disease in 2012, died Tuesday of pneumonia in a hospital, his family said in a statement released by London publicist Clair Dobbs.

The actor was best known for playing tough guys, often with a vein of tenderness threading beneath their violent surface.

Hoskins is best known for his film work, but it was a TV role that first put him on the map - the lead role of Arthur the sheet music salesman in Dennis Potter's 'Pennies From Heaven'

For the Toobworld Dynamic, this was an example of the unseen influence of Mr. Sweet the Demon, who forced people to play out their lives in musical numbers in order to bare their souls - often losing their lives in the process.  And Arthur eventually paid that price.

There is a counterpart to this production to be found in the Cineverse, an Americanized remake which starred Steve Martin.  It basically followed the same story, but there's probably no hidden involvement by any movie adaptation of Mr. Sweet.  Both productions are independant of each other remain firmly ensnared in their own fictional universes.

THE HAT SQUAD VIDEO WEEKEND: IT'S GOOD TO TALK