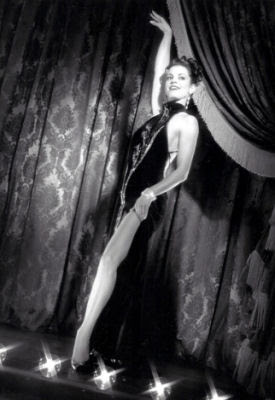 Gypsy Rose Lee (born January 8 or 9, 1911 or 1914 – April 26, 1970) was an American burlesque entertainer, famous for her striptease act. She was also an actress and writer, whose 1957 memoir, written as a monument to her mother, was made into the stage musical and film "Gypsy". 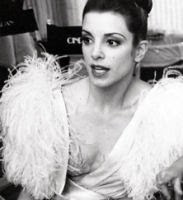 AS PLAYED BY:
Cynthia Gibb 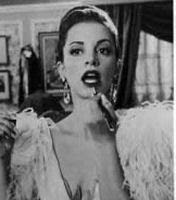 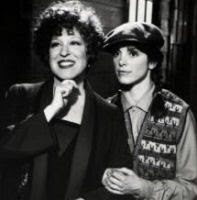 Later this year, Sigourney Weaver will be playing Gypsy Rose Lee in the later years of her life in an HBO movie called "G String Mother".

NEXT YEAR'S TOOBITS AWARDS: WE HAVE A WINNAH!

New Year's Day kicked off with two winners of the 2010 Toobits Awards and both of them were 'Doctor Who' related.

It's the one category that gets locked in early and there's no way I can change my mind later on in the year: First Crossover Of The Year. And you can't beat an entry on the first day of the year!

For next year I also sub-divided that category to accommodate both of these entries: one for an official cross-over and the other for a theoretical one.

First up, the first official cross-over for 2010:

'DOCTOR WHO'
with
'THE SARAH JANE ADVENTURES'
&
'TORCHWOOD'

On his farewell tour to visit all of his old Companions before his body went through regeneration, the Doctor saved young Luke Smith from being hit by a car just outside of his home. Before he re-entered his TARDIS, he turned to wave farewell to his former Companion Sarah Jane and her son. 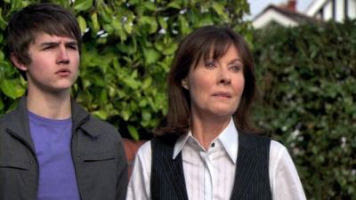 Then, in a bar located in the Zog city of Zagizalgul, the Doctor tracked down Captain Jack Harkness who was drowning his sorrows over the death of his lover Ianto Jones. The Doctor passed him a note which would give Captain Jack the inside edge in meeting Midshipman Frame, formerly of the galactic space cruiser the Titanic. (The note read: "His Name Is Alonso.") 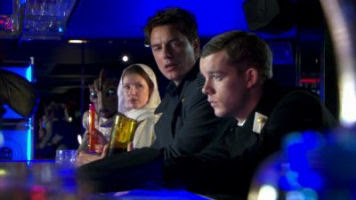 Now! As for the theoretical cross-over with 'Doctor Who'......

'BETTER OFF TED'
with
'DOCTOR WHO'

In the episode "The Great Repression", Phil and Lem sneaked down into the basement to rescue a little robot which lost its job sucking up the spills in the lab. While down there, they passed a Dalek which was right there near the entrance. 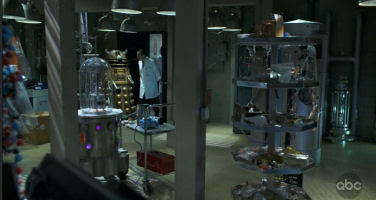 So it's going to be the contention of Toobworld Central that the Dalek found in the Veridian Dynamic building in 2010 is the same "Dalek" which will be possessed and tortured in an underground Utah complex by Henry Van Statten.

This Dalek somehow survived the Time War against the Gallifreyan Time Lords and escaped before the Time Lock was set in place around that war. It ended up on Ascension Island in the South Atlantic around 1961, where it burned for three days from the re-entry friction into Earth's atmosphere.

It was then sold at auction over and over again until if finally landed in the possession of Henry Van Statten. So it could be that by 2009 the Veridian Dynamic corporation owned it before selling it to Van Statten a few years later, or Van Statten's corporate empire absorbed Veridian Dynamic into its structure.

Either way, the Dalek didn't really show signs of life until Van Statten took a personal interest in it. So the fact that the Dalek seen in 'Better Off Ted' just stood there fits in with the established canon of 'Doctor Who'. 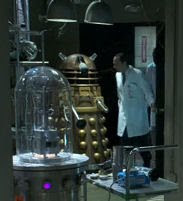 If you want to think it was just a prop, why are you loitering in Toobworld?

Labels: La Triviata, Life During Prime-Time, Sign of the Crossover, Splainin 2 Do, Toobit Awards, TV timeline, Who's On TV

Here's a cross-over from one TV dimension to another: Homer Simpson stumbled out of the Tooniverse to appear on 'The Late Show with David Letterman' to deliver the Top Ten List..... 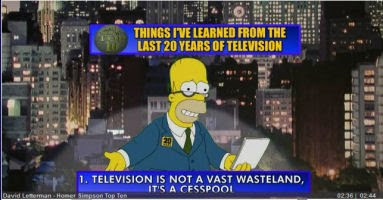 And so it becomes a candidate for the 2010 Toobits Awards next year! 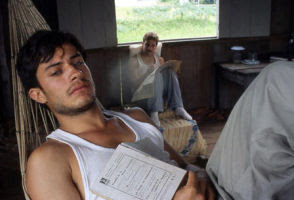 Gael Garcia Bernal is known for playing Che Guevera in the 2004 movie, "The Motorcycle Diaries". But two years earlier, he played Che in "Fidel". Whichever TV dimension ends up housing this TV movie, Garcia Bernal's portrayal of the revolutionary would link it to the "Cineverse"©.....

AS SEEN ON TV: FIDEL CASTRO

On this date in 1959, the Cuban Revolution led by Fidel Castro was completed with the take-over of Santiago de Cuba, the province in the south-east of Cuba. 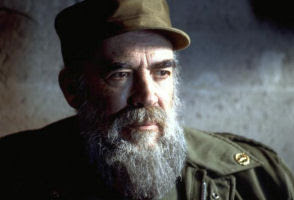 AS PLAYED BY:
Victor Huggo Martin

Labels: As Seen On TV, Recastaways, TV timeline, Twipped from the Headlines, Wikipediaphile

AS SEEN ON TV: GALILEO 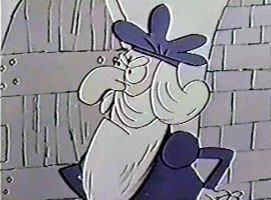 AS SEEN IN:
'Peabody's Improbable History'

AS SEEN ON TV: CAPTAIN KIDD 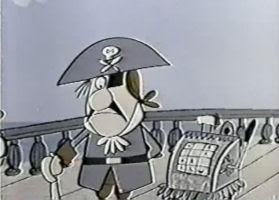 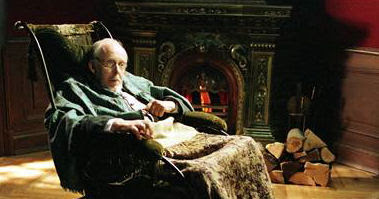 SIGMUND FREUD
AS SEEN IN:
"The Question Of God"

AS PLAYED BY:
Peter Eyre

Labels: As Seen On TV, Life During Prime-Time, Outside the Box, Recastaways, Toobworld Central

After his regeneration, the Eleventh Incarnation of the Doctor was checking to make sure he still had the basic humanoid shape - legs, arms, lots and lots of fingers, ears, eyes, and nose. Although the nose didn't exactly meet with approval, Eleven accepted it with resignation. "I've had worse," he reasoned.
Which one of his past lives do you think he had in mind?
Take a look through the Eleven Doctors above and let me know - Who had the worst nose among the Time Lords?
BCnU!
Posted by Toby O'B at 1:45 AM 2 comments

AS SEEN ON TV: OWEN BARFIELD 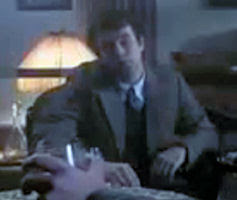 AS SEEN IN:
'The Question Of God'

AS PLAYED BY:
Unknown at this time...

Owen Barfield (9 November 1898 – 14 December 1997) was a British philosopher, author, poet, and critic.Barfield was born in London. He was educated at Highgate School and Wadham College, Oxford and during 1920 received a 1st class degree in English language and literature. After finishing his B. Litt., which became the book Poetic Diction, he worked as a solicitor. Because of his career as a solicitor, Barfield contributed to philosophy as a non-academic, publishing numerous essays, books, and articles. His primary focus was on what he called the "evolution of consciousness," which is an idea which occurs frequently in his writings. He is most famous today as a friend of C. S. Lewis and as the author of "Saving the Appearances: A Study in Idolatry". He died in Forest Row in Sussex.

Labels: As Seen On TV, Wikipediaphile

Oh! Before I go, I just wanted to share this entry my brother AJ posted to one of his Facebook discussions.....

I believe Ernst Stavro Blofeld could have been the Master--keep in mind he had four separate (and known) "re-generations:" Donald Pleasence ("You Only Live Twice"), Telly Savalas ("On Her Majesty's.Secret Service"), Charles Gray ("Diamonds are Forever"), and Max von Sydow ("Never Say Never"). Of course the character appeared in seven Bond movies, though we don't always get to see his face--whatever shape it may have had.

Maybe he's been using Earth - and Spectre - as a base of operations just as the Doctor has. Don't forget the uncanny resemblance Elliot Carver ("Tomorrow Never Dies") has to the Master in the Holiday Special classic with Rowan Atkinson, et al, as the Doctor. Hmmmmnnn.

Holy crap, I sound just like my brother Toby! 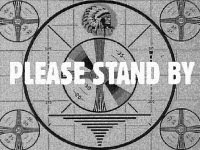 Posting will be automatic and VERY light for the next few days as I go on "hols" for a few days down in Orlando with my roller coaster aficionado buddies Mark & Michael. So all you'll get during that time will be the "As Seen On TV" gallery each day, two of them follow-ups to the Tolkien entry and two from my go-to supply of historical characters in 'Peabody's Improbable History'.

When I get back, I'll begin posting the winners of the 2009 Toobits Awards as well as posts about the first two crossovers of the new year (one official, one theoretical, both about 'Doctor Who').

If for some reason I don't make it back, you heard it here first......

Labels: As Seen On TV, My So-Called Life, Outside the Box, Splainin 2 Do, Toobworld Central 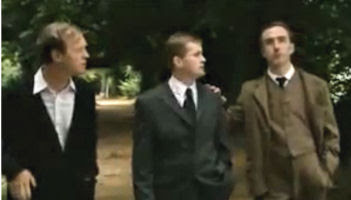 J.R.R. TOLKIEN
[on the left, with Hugo Dyson & CS Lewis]
AS SEEN IN:
"The Question Of God"

AS PLAYED BY:
Ian Bellman

From Wikipedia:
John Ronald Reuel Tolkien, CBE (3 January 1892 – 2 September 1973) was an English writer, poet, philologist, and university professor, best known as the author of the classic high fantasy works "The Hobbit", "The Lord of the Rings" and "The Silmarillion".

Tolkien was Rawlinson and Bosworth Professor of Anglo-Saxon at Oxford from 1925 to 1945, and Merton Professor of English Language and Literature from 1945 to 1959. He was a close friend of C. S. Lewis—they were both members of the informal literary discussion group known as the Inklings. Tolkien was appointed a Commander of the Order of the British Empire by Queen Elizabeth II on 28 March 1972.

After his death, Tolkien's son, Christopher, published a series of works based on his father's extensive notes and unpublished manuscripts, including "The Silmarillion". These, together with "The Hobbit" and "The Lord of the Rings", form a connected body of tales, poems, fictional histories, invented languages, and literary essays about an imagined world called Arda, and Middle-earth within it. Between 1951 and 1955 Tolkien applied the word legendarium to the larger part of these writings.

While many other authors had published works of fantasy before Tolkien, the great success of "The Hobbit" and "The Lord of the Rings" when they were published in paperback in the United States led directly to a popular resurgence of the genre. This has caused Tolkien to be popularly identified as the "father" of modern fantasy literature—or more precisely, high fantasy. Tolkien's writings have inspired many other works of fantasy and have had a lasting effect on the entire field. In 2008, The Times ranked him sixth on a list of "The 50 greatest British writers since 1945".