TVXOHOF TRIBUTE - THE GREAT ONE ON HIS 100TH BIRTHDAY 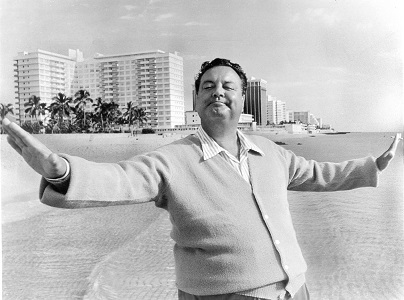 Today is the 100th anniversary of the birth of the Great One, Jackie Gleason.  I would have to say he's the true American Success Story in the television business and that's proven every day by how popular those "ancient" episodes of 'The Honeymooners' have been with each succeeding generation of viewers.

It's pozz'ble, just pozz'ble, that I could have inducted Mr. Gleason into the TVXOHOF in some future Creators' showcase which I run every September.  However, I think it's more appropriate to do this on such a special occasion as his centenary.

Luckily we have three basic qualifiers to justify the occasion..... 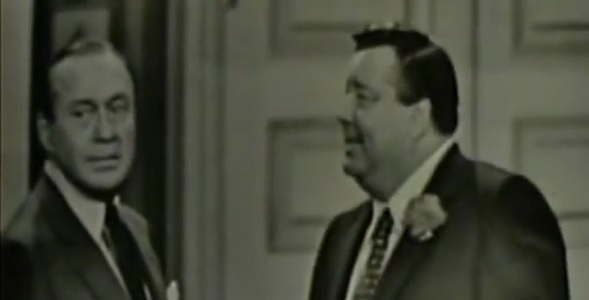 While in New York, Jack wants to impress Jackie Gleason, so he and Rochester move into the penthouse suite of the luxurious St. Regis Hotel, and there's no length Jack won't go to, in order to avoid having to pay the $36 a night rental. 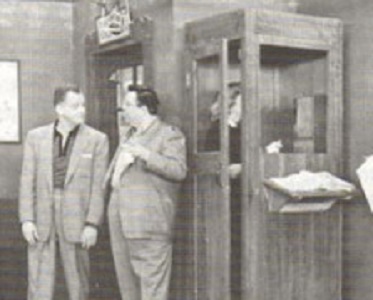 Ralph tells the lodge members he knows Jackie Gleason and can get him for a show at the Raccoon Lodge (of course he doesn't). He comes clean to Norton who helps him come up with a plan to get Gleason to come to the event on the basis that it's a charity.  It's not, but they don't plan on letting that get in the way. Their plan involves waiting in Gleason's hotel lobby to ask him for help. The scene in the lobby revolves around a series of exits and entrances by Ralph and Gleason then Ed and Carney and even Joyce Randolph gets involved in playing a different character in that lobby. Gleason and Ralph manage to miss each other in the lobby. On the night of the event Ralph is shaking in his boots because he doesn't know that Alice had managed to get Gleason to show up by making his favorite food and sending it to him with a note asking him to help. Another interesting character swap takes place and everyone is happy at the end. 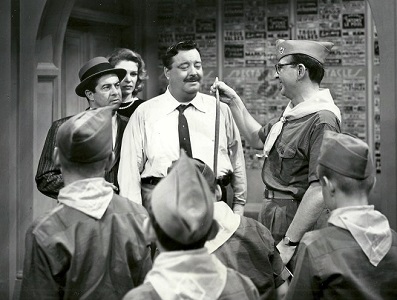 A couple of crooks made off with one of the largest hauls. The crime - they made off with Jackie Gleason.  The kidnapping began at the benefit for the Heart Fund.  (Great cast!  Peter Falk, Jack Klugman, Everett Sloane, Harvey Lembeck, Barnard Hughes, Sorrell Brooke, Salome Jens, Harry Dean Stanton, Bill Zuckert, William Redfield, plus George Jessel and TVXOHOF member Ed Sullivan as themselves.)

And then there are the many occasions in which he made appearances on variety shows.  Those always do count but they don't carry enough weight, except for the stars of the shows, to be valid reasons for entry.  Still, it was always a major get for one of those variety shows to have Jackie Gleason as a guest star. 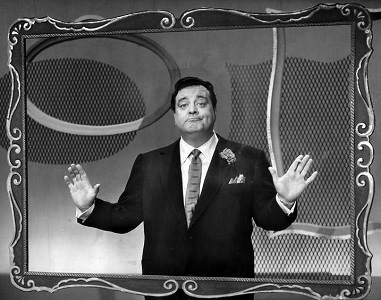 But I do think special mention should be made of the second episode of his quiz show "You're In The Picture", in which Gleason just sat there and apologized to the audience for the drek that was presented during the premiere episode the week before.

So here's to you, Mr. Gleason.  And away you go into the Television Crossover Hall Of Fame.

How sweet it is! 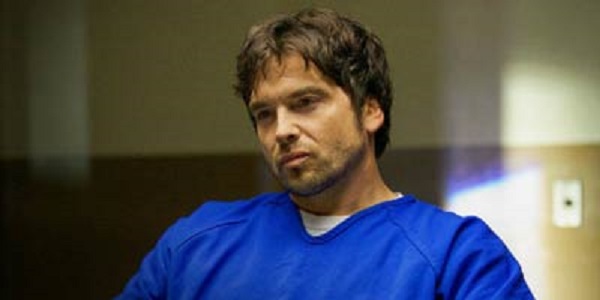 Raynard Waits, 'Bosch' - the alias used by a serial killer named David Harris.  (In the Michael Connelly books, the serial killer's real name was Robert Foxworth, but for O'Bvious reasons that couldn't be used in TV.  It's another example in which BookWorld cannot be interchanged with Toobworld.) 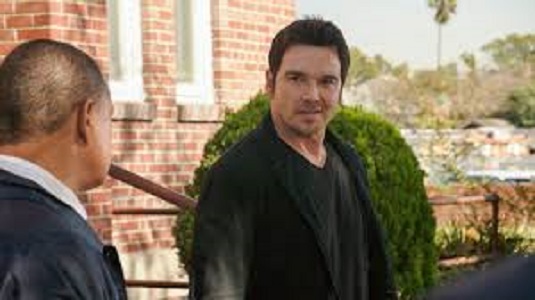 Mark Hickman, 'Major Crimes' - a former LAPD detective who disgraced himself by committing perjury on the stand during a high-profile murder case.  For at least a decade, he was lying low and out of the department until he got involved with a new murder investigation that had connections to the past.

I think these two characters, out of all the roles played by Gedrick over the years, are related.  But not by blood as in the case of identical cousins.

Raynard Waits had become fixated on Detective Harry Bosch after he was caught by the cops with the body of a dead male escort in the back of his van.  He latched onto details of the case Bosch was currently investigating and used those to his advantage, leading to his escape from custody.  Eventually, Bosch became an O'Bsession for Raynard Waits and that led to a final showdown between the two men.

But I'm thinking there's a "Missing Link", that Bosch was not the first LAPD detective with whom David Harris was fixated.  I think the future "Raynard Waits" was captivated by the idea of a corrupt cop and sought to emulate HIckman... going as far as having plastic surgery so that he even resembled the former detective.

That's my theory of relateeveety and I'm sticking to it.

TAKEN TO THE BATES MOTEL 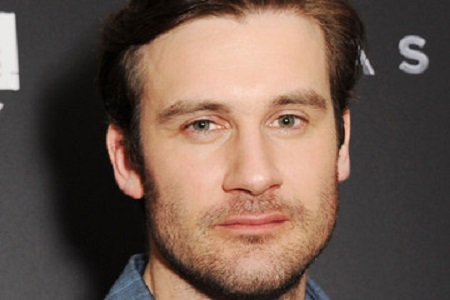 From the "Coming Soon" site:

The Hollywood Reporter brings word that Vikings star Clive Standen has been cast in NBC’s 'Taken' TV series as CIA operative Bryan Mills, a younger version of the Liam Neeson character from the film franchise.

Homeland‘s Alexander Carry is set to write the script for the pilot episode and will executive produce alongside filmmaker Luc Besson, who wrote and produced the three films and directed the first. Matthew Gross, Edouard de Vesinne and Thomas Anargyros will also executive produce. Alex Graves (Game of Thrones, Homeland) will direct the pilot.

I couldn't use 'Bates Motel' in Earth Prime-Time because the films were pulled into the TV Universe by a TV movie starring Anthony Perkins himself as Norman Bates.  So this got me thinking - why not put 'Taken' into the same dimension as 'Bates Motel' since they're similar in nature - TV shows based on movies that serve as prequels but set in the modern day?

Let me know if this arrangement makes sense to you.....

TUESDAY NEWS DAY - ONE GROUNDHOG DAY AT A TIME? 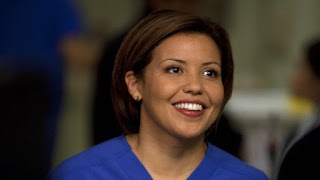 I made a vow to myself not to waste time on writing about TV shows while they're still in the casting stage and not even past the sold pilot episode period.  It was just a waste of my time.  But when it comes to TV shows being made for Netflix, I think it's a safe bet that the show will get "on the air" and become part of the Toobworld dynamic.

Such a show will be the new version of 'One Day At A Time'.  Sadly the show was refreshed in people's memories because of the fairly recent death of Pat Harrington who played Schneider the building super in the series.  Normally a remake would be banned from Earth Prime-Time but it seems that there will be enough differences between the two series that they'll probably be sharing nothing more than the title and the slimmest of connections by way of a Life situation that must get repeated throughout the world.

Along with the late Mr. Harrington, the original version of 'One Day At A Time' also starred the late Bonnie Franklin as Ann Romano with Mackenzie Phillips and Valerie Bertinelli as her daughters.  On occasion, Nanette Fabray showed up as Ann's mother.  The basic storyline was that Ann had divorced her husband (played occasionally by Joseph Campanella) and now trying to make a new life for herself and her daughters.

In the most general of terms, the new series will be the same.  Only this time out, the woman, Penelope, will be Cuban-American and raising a daughter and a son.  She'll get help - somewhat - from her Cuban-born mother, to be played by Rita Moreno.  Penelope will have been trained as a medical specialist and served in the Gulf* but is now the manager of a doctor's office with dreams of becoming a doctor herself one day.  (Ann Romano went into advertising.)

The one thing they will share in common is that they each have/had a building super named Schneider.  And that's not such an unreasonable coincidence, certainly nothing to get banished to the Land O' Remakes for.

So if you put together a chart showing both shows' main points in comparison with each other, you can see that the main Toobworld could easily handle both shows.

Once the series begins its run, I'll check it out in order to see if I can do a theory of relateeveety between the two Schneiders.  It might prove worthwhile.

Click here for the full story provided by Deadline.

And a big thanks to Rob Buckley for giving me the link to the story.....

BY ANY OTHER NAME - RUSTY FRIENDS

Danny is hopeful that Rusty will ask him to be his partner at an upcoming Father and Son bowling tournament.

Always watching TV shows with an eye to how to use it in my Earth Prime-Time "work", I decided to check out the careers of Rusty's two friends at Herky's bowling alley.  And this just jumped out at me:

'THE JOEY BISHOP SHOW'
"JOEY ENTERTAINS RUSTY'S FRATERNITY"
Rusty Hamer, who played Rusty Williams on Make Room for Daddy (1953) (AKA "The Danny Thomas Show"), plays the same character who is now a college student and comes to stay with the Barnes family for a while in the second of three guest appearances. Joey and three of his no-good pals help Rusty and his fellow pledges carry out a most unusual fraternity initiation stunt.

And in that guest cast:
Craig Marshall...
Pledge

As far as I''m concerned, those two pledges were Dale & Jimmy, bringing the two sitcoms even closer together.  The three friends must have enrolled in the same NYC college* and then pledged to the same fraternity.

* Was the name of Rusty's college ever mentioned on 'The Joey Bishop Show'?  If not, I would fill in the blanks by making it be Hudson University in order to expand the Great Mosaic of Toobworld........