THE 'DOWNTON ABBEY' FINALE - O'BSERVATIONS FROM ANOTHER O'BRIEN 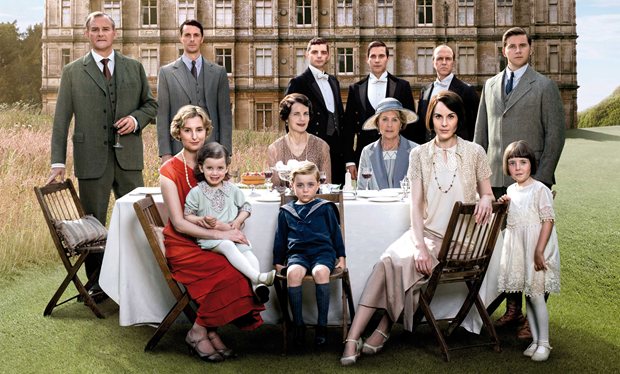 My brother texted me this morning with some of his ideas as to how the 'Downton Abbey' finale should have ended, plus suggestions for an inevitable reunion TV movie.

I'm not the only one in the O'Brien family who can make O'Bservations.....

I thought the Bateses should've named the baby Robert but they missed that nice touch. Or they could've named it Pamook, since it was born in the bed he died in.

My favorite little story line in these last two episodes was Spratt's. I think he became more of a match for Denker than I imagined he could be.

I liked when Violet and Isobel rescued Merton from the mansion. That little bitch wife needed a slap.

"Auld Lang Syne" got me.

A few more historical characters could've popped up over the years. Think how cool it would've been had Edith encountered an unknown writer and wordsmith who was the SAME AGE as she was   ....  JRR Tolkien. Both born in 1892. (Tolkien's wife's name was Edith.)

Happy for Barrow but they seemed awfully quick to overlook his suicide try.

It also leaves you guessing on a few more marriages:

--Mosley and Baxter.
--Mrs. Pattmore and the farmer Mason.
--Daisy and Andy.

Somehow I saw Daisy getting into politics and someday winning election to Parliament as a Labour Party stalwart.

Master George will be to Barrow as Mary was to Carson.

I definitely see a movie in a few years time, with the Depression and then WW2. George would be old enough for war by 1939. Depression would kill Robert. No need to even include Violet, dead already.

Lots of material for Fellowes to play with.

Women were first elected to Parliament in 1929, so it would be just in time for a movie set 4 years after end of series. Daisy could lose on first try. But come back and win later. Then be in good position for Labour wins of 1945.

Some of those O'Bservations from my brother are definitely tongue-in-cheek. 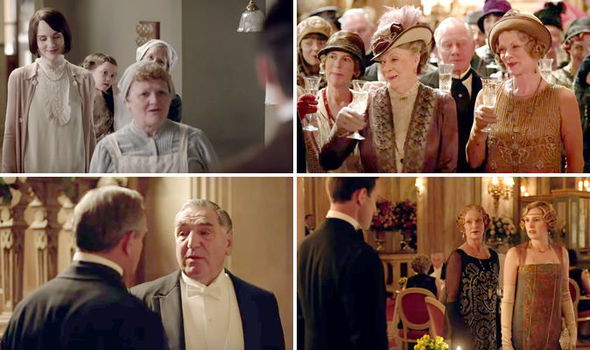 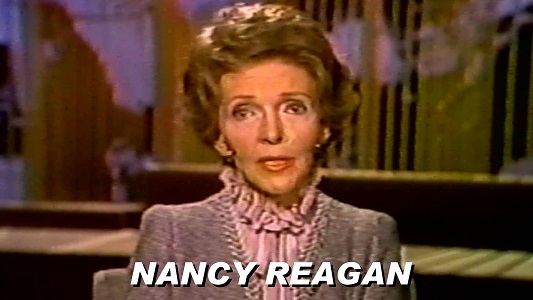 From Wikipedia:
Nancy Davis Reagan (born Anne Frances Robbins; July 6, 1921 – March 6, 2016) was an American actress and the wife of the 40th President of the United States, Ronald Reagan. She was the First Lady of the United States from 1981 to 1989.

As Nancy Davis, she was a Hollywood actress in the 1940s and 1950s, starring in films such as "The Next Voice You Hear...", "Night Into Morning", and "Donovan's Brain". In 1952, she married Ronald Reagan who was then president of the Screen Actors Guild. They had two children together. Reagan was the First Lady of California when her husband was Governor from 1967 to 1975 and she began to work with the Foster Grandparents Program.

Nancy Reagan became First Lady of the United States in January 1981, following her husband's victory in the 1980 presidential election. She was criticized early in his first term largely due to her decision to replace the White House china, despite its being paid for by private donations. She aimed to restore a Kennedy-esque glamour to the White House following years of lax formality, and her interest in high-end fashion garnered much attention as well as criticism. She championed recreational drug prevention causes by founding the "Just Say No" drug awareness campaign, which was considered her major initiative as First Lady.

Nancy Reagan enjoys a unique position among the First Ladies as far as the Toobworld Dynamic goes.
And there are the portrayals by actresses in TV movies, mostly about the time she lived in the White House.  However, Jackie Kennedy and Mary Todd Lincoln probably have more of those credits to their name than Nancy Reagan.

So why is she unique?

Nancy Reagan - mostly as Nancy Davis - was an actress when she met Ronald Reagan and appeared in several TV productions, many of them Westerns.  As such she has supplied quite a few Toobworld citizens who looked exactly like her.  The only other First Lady whom I can think of who can make such a claim would be Hillary Rodham Clinton as a Skitlandian bartender in a 'Saturday Night Live' sketch.

'The Tall Man'
Sarah Wiley
- "Shadow of the Past"

As for Nancy Reagan in Toobworld......

LEAGUE OF THEMSELVES
'Diff'rent Strokes'
"The Reporter" 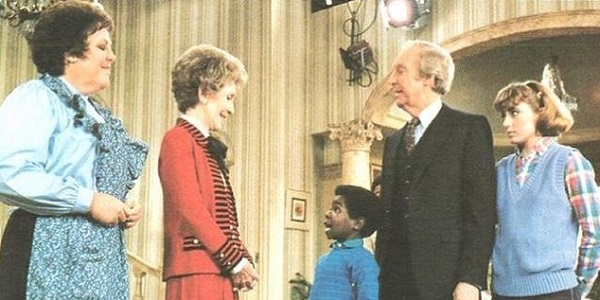 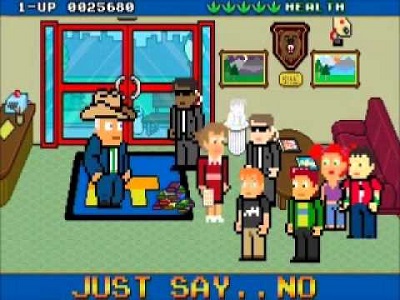 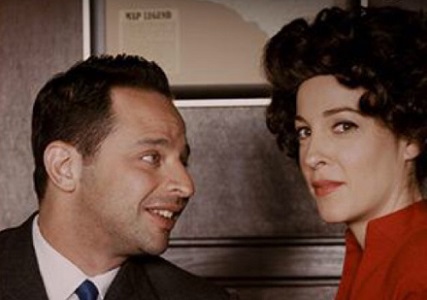 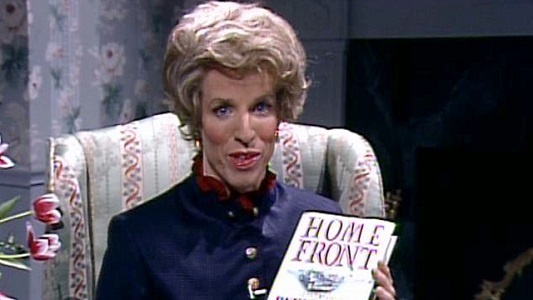 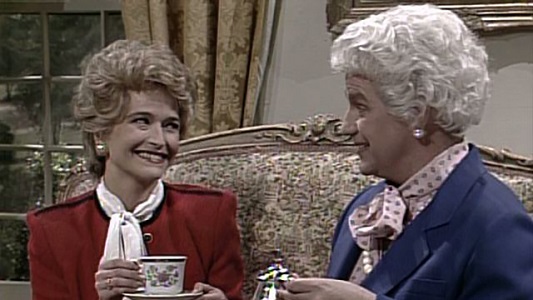 'The Dana Carvey Show'
As Portrayed by Heather Morgan 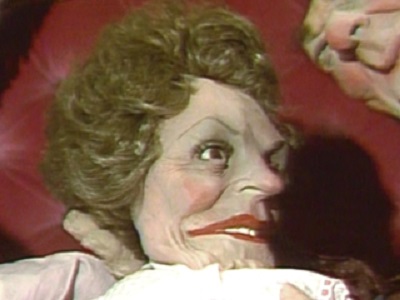 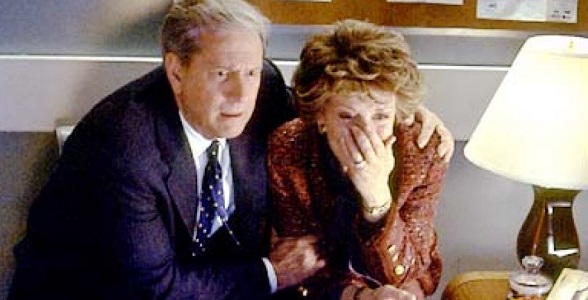 "Without Warning: The James Brady Story"
"The Reagans" 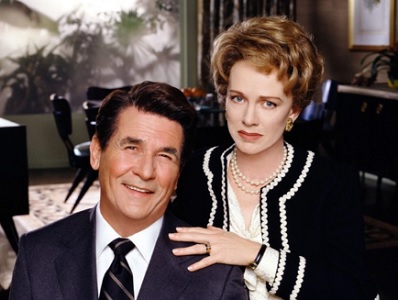 Eventually - someday, some year - Nancy Reagan will be inducted into the TV Crossover Hall of Fame as a Christmas multiversal.  But for this year? 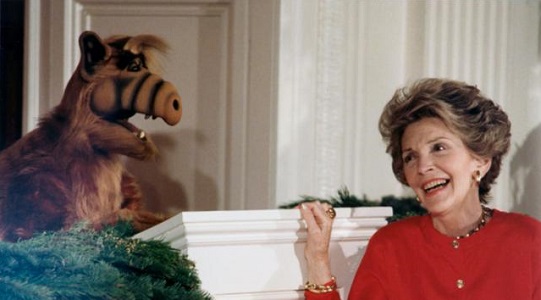