Whit Barrett was a nationally acclaimed syndicated columnist back in the States during WWII who would often feature prominent servicemen in his columns.  Four of those featured went on to be promoted after his columns were printed.  So of course Captain Binghamton was anxious that he should be so lucky when he found out that Barrett was coming to Taratupa to write about him.

Two of the promoted officers were Admirals, one of them named Brawley, and there was Commander Simpson as well.  As for the fourth officer, as far as Captain Binghamton was concerned, he was a hot-rodder on the PT-109 who became a full Lieutenant after Barrett wrote his piece about him.

This is a reference to the televersion of John F. Kennedy, which means that the article had to be written before October of 1943.  (That's when Kennedy was promoted to being a full Lieutenant.) 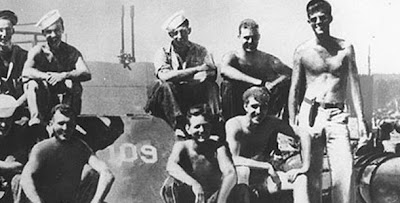 LOCATION SHOT - SHEIK-IN' ALL OVER

'THE BIONIC WOMAN'
"JAIME AND THE KING" 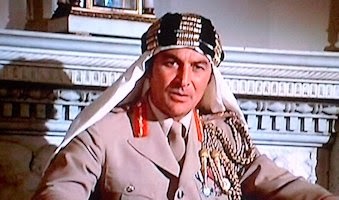 In 1977, a conference of invited delegates from the oil-producing countries in the Middle East was held in Monte Carlo.  The keynote speaker was Ali Ben Gazim, the Shah of Almein on the Persion Gulf Coast. 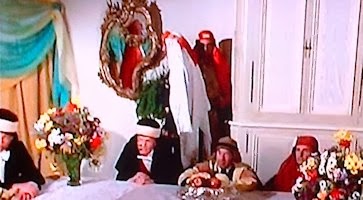 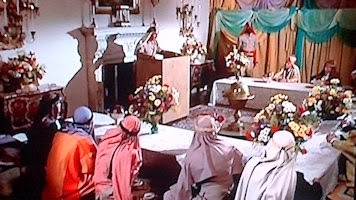 There were a dozen other delegates around that table, each representing one of twelve countries with a stake in the situation.  (The man walking away in the back of the room was Prime Minister Hassam of Almein and not a delegate.)

So I looked at my list of nations to be found only in Toobworld and came up with this list of those Middle Eastern countries I'd like to see be represented at the conference:
So many Arabian countries from other shows (but which were never named) could have had delegates sitting at that table.

For instance, there was this sheik seen in "A Touch Of Brimstone", an episode of 'The Avengers': And classic 70s heavy Sid Haig might have been from any one of those countries listed above when he appeared as "Third Passenger" in the "Nuclear Alert" episode of 'The Six Million Dollar Man': 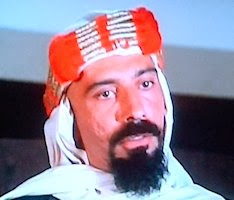 I was tempted to add the United Heshamite Kingdoms, but I'm still not thoroughly convinced that it wasn't a real aggregate of small kingdoms in the Persian Gulf.....

Labels: By Any Other Name, Game of the Name, Linkin' Logs, Location Shot, Missing Links, Wish-Craft 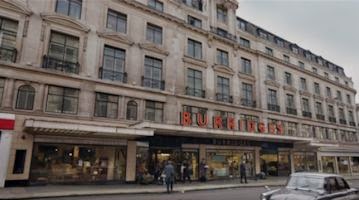 'Endeavour', the prequel to 'Morse', has been supplying plenty of in-jokes for Easter Egg hunters over its first two seasons.

The latest is the episode "Sway" which centered on Burridge's Department Store during an investigation.

Burridge's was first seen in "Trove", when Miss Great Britain, Diana Day, officiated at a ceremony at the store.

But its history goes farther back and out of the TV Universe in general as a matter of fact....

It was the location for a 1953 British comedy movie "Trouble In Store" which starred Norman Wisdom and Margaret Rutherford. 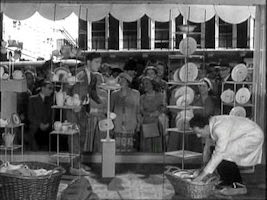 Wisdom played a stock clerk (also named Norman) who was always getting fired from his job.  "Trouble In Store" proved to be the second most popular movie at the British box office in 1954.

I don't think that's enough to warrant bringing the entire movie into Toobworld, but "Trouble In Store" and an alternate version of 'Endeavour' could be sharing one of the Borderlands.....

Just another example of Toobworld going to the movies.....

'NAKED CITY'
"THE PRIME OF LIFE"

On November 19th, 1962, - 52 years ago today - Philip Hames was put to death by electric chair at Sing Sing Prison in upstate New York.
A group of men, mostly reporters and law enforcement officers were recruited to serve as witnesses to the execution. Among them were NYPD detective Adam Flint who arrested Hames after he killed three police officers following a botched robbery. 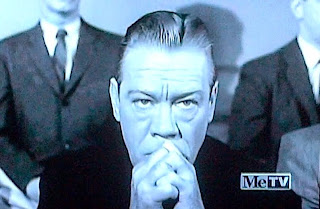 Another witness was Tom Henson, one of the security guards held hostage by Hames during that robbery. Henson brought a bottle of whiskey with him to help fortify him against the coming ordeal. 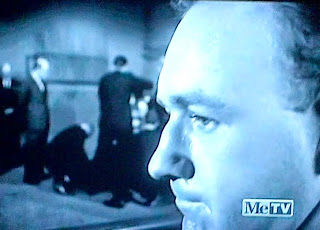 A young reporter named Jasper was also present, hoping he wouldn't get sick in front of the others. Jasper didn't want to be there, but his editor forced the assignment on him. (His newspaper and editor were not named in the episode, so I'm going to fill in the blanks and claim that his boss was Martin Lane at the New York Chronicle.) 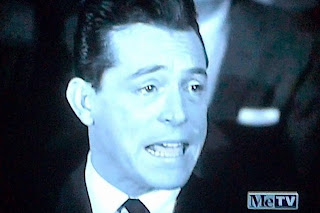 Adam Flint didn't want to be there either, but his boss, Lt. Mike Parker, insisted. Parker figured that every detective shoudl experience every aspect of their job so that they understood the ramifications of each action they took.


Although we didn't see it happen during the episode, there was one witness there who was affected more by the execution than the others. 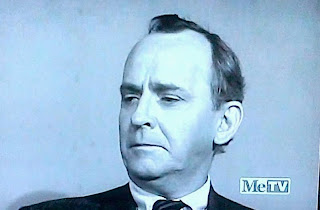 His name was John Majeski and he was a reporter for the New York Ledger.
(His name and his newspaper were not stated in the episode. It's just another bit o' wishcraft to forge a missing link between several NYC-based TV shows. 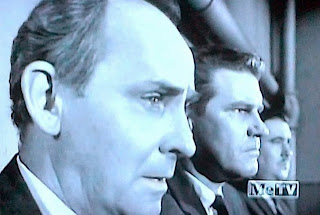 Majeski was left just as disturbed by what he witnessed and he was even affected by the sight of the two chairs separated by a cage which were used by the condemned when they had visitors.


As I said, this reporter was more deeply affected by witnessing Hames' execution, but it took longer to manifest. I believe that as he thought more and more on the subject, heard a calling to enter the priesthood. Majeski must have figured that as a servant of God he might be able to help somebody from following the doomed path of Phil Hames. After nearly a decade as a priest, Father John Majeski became the pastor of a parish in Queens, where his greatest challenge was in dealing with a local resident by the name of Archie Bunker.....


Leading up to one of the darkest days in my lifetime...... A four-hour mini-series follow-up to 'The Kennedys' from 2011 will be broadcast on the Reelz Channel in 2016.  Entitled 'The Kennedys: After Camelot', it will star Katie Holmes as Jackie Kennedy Onassis and she will also be the executive producer and the director for one of the episodes.

I haven't heard yet if any of the other actors from the previous production will be resuming their roles, so it's unknown right now if the two mini-series will share the same TV dimension or if they will have to be split up as was the case with 'The Winds Of War' and 'War And Remembrance'.

But that's the beauty of the multi-dimensional Toobworld Dynamic - there are an infinite number of Toobworlds out there.  And a good thing too - I don't think we'll ever see the end of Kennedy docu-dramas.....

Labels: Alternateevee, As Seen On TV, O'Bservations, Outside the Box, Recastaways, TV timeline, Twipped from the Headlines


As big a fan of 'Columbo' as I am (It holds the #5 spot in my all-time favorites!), I'm not blind to the fact that some of those episodes were clunkers.

One of these was "An Old-Fashioned Murder" with Joyce Van Patten, Celeste Holm, Jeannie Berlin, and Tim O'Connor.  It didn't help that there was a vacuum of interest at its center with the casting of Van Patten and Berlin.  Berlin was either flat or going for some kind of line delivery that was jarring.  Van Patten's a good character actress but she couldn't carry the load here.  Her delivery was off as well.

At any rate, I watched it again this past Sunday on ME-TV (at least until 'Endeavour' came on) and decided to look up some info about it during the dull stretches.  I was able to surf a lot of the net during that time....

And I found this on Ol' Reliable, the IMDb:

The mansion that the Lyttons live in is the same one that Bruce Wayne lived in on the Batman TV series. 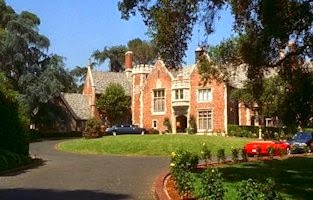 And here's the Lytton Museum/Home: 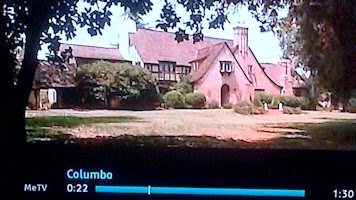 Unless the Lytton location shot was filmed from the back of the mansion, I can't see it being the same edifice.  Can you?

I was really hoping that it would prove true because it would go some ways toward my claim that Gotham City has to be in California.  Either both mansions were built by the same local architectural firm, or the Lyttons bought the place when Bruce Wayne had to abandon it after his retirement from crime-fighting.

I have a feeling - although I can't recall it coming up during the episode - that Ruth Lytton's parents lived there in their time and that she and her siblings were raised there.  So that would invalidate the second theory.

ECCE PROMO! THE MEN AT TEN!


So there's that - a new addition to one of the tiniest of TV dimensions, the Promoverse.  Previous entries into that Toobworld have been the promo blipverts combining 'Psych' & 'Monk', 'Psych' & 'Monk' & 'The Dead Zone', 'Monk' & 'The 4400', 'Psych' & 'Defiance', 'Psych' & 'Royal Pains', 'Psych' & 'White Collar', and 'Burn Notice' & 'Psych'.
I'm thinking I will even throw in those TV commercials from the Fifties and early Sixties in which established TV characters - in character - extolled the virtues of various breakfast cereals, cigarettes, and coffees.  It would certainly eliminate the Zonks from Earth Prime-Time caused by those characters, like Rob Petrie, Sheriff Andy Taylor, and Superman talking directly to the camera about those products in much the same way as the Promoverse removes their telecognizance of their timeslots as seen above......
Let me know what you think of that idea......
BCnU!
Posted by Toby O'B at 12:30 AM 2 comments