The Television Crossover Hall of Fame has inducted many products into the Hall in the past – the New York Chronicle, the New York Ledger, the LA Tribune, Playpen Magazine, Morley Cigarettes, Slush-0 and Smeat among them.  I could be wrong on this, but this may be the first time an actual product from the Trueniverse has been allowed into the TVXOHOF.  But these are strange prime-times we live in…. 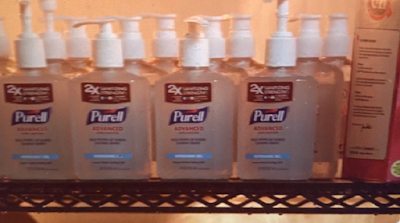 PURELL
From Wikipedia:
Purell is an American brand of hand sanitizer invented in 1988, and introduced to the consumer market in 1997, by GOJO Industries. Its primary component is ethyl alcohol (70% v/v), and is used by wetting one's hands thoroughly with the product, then briskly rubbing one's hands together until dry.

Purell was acquired by Johnson & Johnson in 2006, then reacquired by GOJO in 2010. That year, Purell Green Certified Instant Hand Sanitizer became the first hand sanitizer to meet EcoLogo CCD-170 standards.

In 2020, some of Purell's claims, including that it kills "99.99% of most common germs", have been met with regulatory warnings to desist the claim.

During the 2020 COVID-19 pandemic, GOJO faced unprecedented demand for Purell products due to its reputation as a leading name-brand for hand sanitizer. Starting immediately as cases began to rise in the United States, Purell products ran out-of-stock and remained largely unavailable to the general public, with new shipments being prioritized to medical and professional customers. Purell's products were still hard to find in July 2020, despite GOJO producing more than twice the amount of hand sanitizer in 2020 than in 2019. GOJO has stated it is currently investing in further strategies to source ingredients and substantially increase manufacturing space for use by mid-2021.
It should be O’Bvious why I’m acknowledging its presence in Toobworld, but the citizens of Earth Prime-Time were using the original instead of a knock-off before the current pandemic.  Sheldon Cooper would probably be in a catatonic state if it didn’t exist; and the hand sanitizer was a major plot point throughout the latest season of ‘Curb Your Enthusiasm’, written and filmed before the pandmic.

Here are the shows which have mentioned it or showed it in use. There are enough references here to make it eligible for the Hall.  But if you know of others, please let me know. 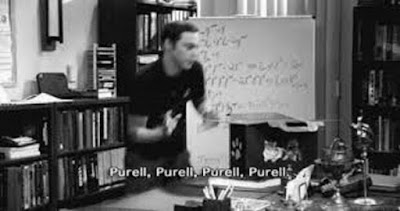 [Sheldon runs outside]
Jimmy:
Uh, where is he going?
Leonard Hofstadter:
He keeps emergency Purell in the car.
The Big Bang Theory
The Meteorite Manifestation

Amy Farrah Fowler:
Okay, so each welcome bag gets a schedule of events, a map, and chocolate from me. And from Sheldon, a bottle of Purell, the number for Poison Control in case someone accidentally drinks the Purell, and a laminated table of elements because the American school system is a failure.

[Amy shuts the laptop; as she leaves, Penny takes the bottle of Purell from her gift bag]

Penny Hofstadter: [pouring it on her computer]
Oh, well... turns out this is gonna come in handy after all.

Diane Lockhart:
“Guard!  Where are the Handi-Wipes?  I need my Purell.”
&
“Do you have any idea how hard it is to get blood out of Egyptian cotton?  And now, no Purell.” 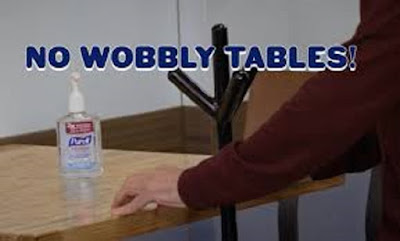 Curb Your Enthusiasm
All of Season Ten 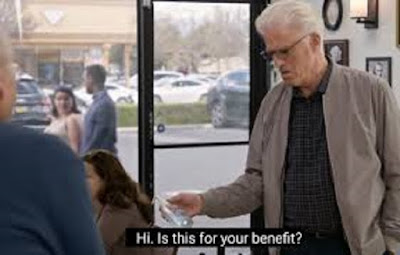 From IndieWire
by Ryan Lattanzio:
(One of the signatures of the Latte Larry experience was a bottle of hand sanitizer at every table, along with the “no defecation” rule.)

At the end of Season 10, Latte Larry’s tragically burns to the ground after one of his employees mishandles his self-warming coffee mug devices, and one of the most harrowing images, in hindsight, is a closeup on a stockpile of Purell melting in the flames.

“All anyone thought when they saw the final episode was, ‘Oh my god, you burned all that Purell!'” Schaffer said. “It wasn’t really what we were thinking about in 2019,” which was when they were writing and filming the 10th season.

And then came the denouement, the burning-down of Latte Larry’s. The fire happens for a number of reasons, but it gets worse because of Larry’s Purell obsession. As his vast stores of Purell bottles, which he provides at every table, ignites, the entire block turns into an inferno. And when that happens, he accidentally says “fuck you” to the world, pre- and post-coronavirus. 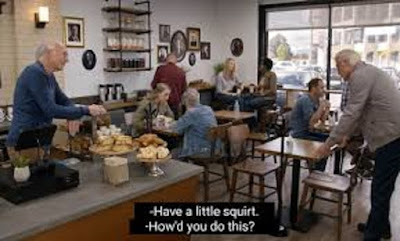 Welcome to the Hall, Purell.  I would shake your hand, but of course you don’t have any.
And besides, that would defeat your purpose. 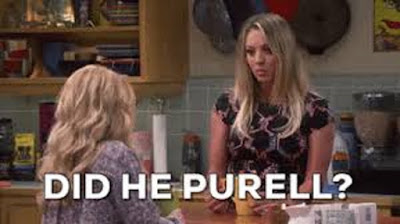 O’BSERVATION
Just a quick programming note – We’re coming up to the end of the year and even in lockdown, things are going to be off-kilter for Yours Viewly here at Toobworld Central.  We still have the Christmas Honors entry to the TVXOHOF to be presented on Christmas Day, but this entry marks the last of the Friday Hall of Famers, not only for the year but forever.

I’ll still be doing the monthly showcases, plus the Birthday and Christmas Honors List, and sadly, also the memorial tributes.  (Hopefully we won’t have that many.  Actually, considering it’s 2020 and we're in a pandemic, I thought there would have been many more, thanks to COVID-19.)

I may continue inducting the Toobworld televersions of real TV shows; I enjoyed those.  But I may save those for the Birthday Honors entry.  We’ll see….