AS SEEN ON TV: BENJAMIN DISRAELI 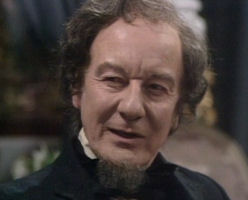 BENJAMIN DISRAELI
AS SEEN IN:
'Edward The King'

AS PLAYED BY:
Sir John Gielgud

From Wikipedia:
Benjamin Disraeli, 1st Earl of Beaconsfield, KG, PC, FRS, (21 December 1804 – 19 April 1881) was a British Prime Minister, parliamentarian, Conservative statesman and literary figure. Starting from comparatively humble origins, he served in government for three decades, twice as Prime Minister of the United Kingdom. Although his father had him baptised to Anglicanism at age 12, he was nonetheless Britain's first and thus far only Prime Minister who was born into a Jewish family—originally from Italy.[1] He played an instrumental role in the creation of the modern Conservative Party after the Corn Laws schism of 1846.

Although a major figure in the protectionist wing of the Conservative Party after 1844, Disraeli's relations with the other leading figures in the party, particularly Lord Derby, the overall leader, were often strained. Not until the 1860s would Derby and Disraeli be on easy terms, and the latter's succession of the former assured. From 1852 onwards, Disraeli's career would also be marked by his often intense rivalry with William Ewart Gladstone, who eventually rose to become leader of the Liberal Party. In this feud, Disraeli was aided by his warm friendship with Queen Victoria, who came to detest Gladstone during the latter's first premiership in the 1870s. In 1876 Disraeli was raised to the peerage as the Earl of Beaconsfield, capping nearly four decades in the House of Commons. 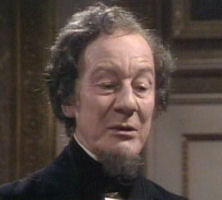 Before and during his political career, Disraeli was well-known as a literary and social figure, although his novels are not generally regarded as a part of the Victorian literary canon. He mainly wrote romances, of which Sybil and Vivian Grey are perhaps the best-known today. He is exceptional among British Prime Ministers for having gained equal social and political renown. He was twice successful as the Glasgow University Conservative Association's candidate for Rector of the University, holding the post for two full terms between 1871 and 1877.
BCnU!
Posted by Toby O'B at 12:14 AM 0 comments

AS SEEN ON TV: LORD PALMERSTON 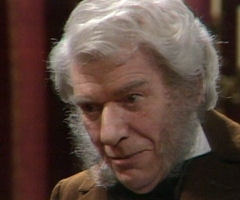 LORD PALMERSTON
AS SEEN IN:
'Edward The King'

AS PLAYED BY:
Andre Morell

From Wikipedia:
Henry John Temple, 3rd Viscount Palmerston, KG, GCB, PC (20 October 1784 – 18 October 1865), more popularly known simply as Lord Palmerston, was a British statesman who served twice as Prime Minister of the United Kingdom in the mid-19th century. Popularly nicknamed "Pam", he was in government office almost continuously from 1807 until his death in 1865, beginning his parliamentary career as a Tory and concluding it as a Liberal.

He is best remembered for his direction of British foreign policy through a period when the United Kingdom was at the height of its power, serving terms as both Foreign Secretary and Prime Minister. Some of his aggressive actions, now sometimes termed liberal interventionist, were greatly controversial at the time, and remain so today.

He was the last Prime Minister of the United Kingdom to die in office.

AS SEEN ON TV: LORD ABERDEEN 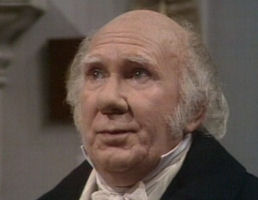 AS PLAYED BY:
Arthur Hewlett

In December 1852, however, he became Prime Minister and headed a coalition ministry of Whigs and Peelites. Although united on free trade and on questions of domestic reform, his cabinet which contained Lord Palmerston and Lord John Russell, was certain to differ on questions of foreign policy. He entered the country into the Crimean War on the side of the Ottoman Empire following pressure from some of his cabinet. Palmerston, supported by Russell, favoured a more aggressive policy, and Aberdeen, unable to control Palmerston, acquiesced. However the war proved his downfall. As reports returned detailing the mismanagement of the conflict Russell resigned; and on 29 January 1855 a motion for the appointment of a select committee to enquire into the conduct of the war, was carried by a large majority. Treating this as a vote of no confidence, Aberdeen resigned. 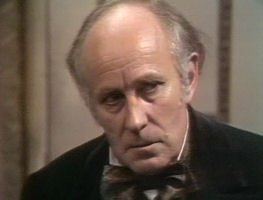 AS PLAYED BY:
Peter Collingwood

From Wikipedia:
John Russell, 1st Earl Russell, KG, GCMG, PC (18 August 1792 – 28 May 1878), known as Lord John Russell before 1861, was an English Whig and Liberal politician who served twice as Prime Minister of the United Kingdom in the mid-19th century. He was the grandfather of Bertrand Russell, the mathematician, philosopher and political campaigner.

AS SEEN ON TV: THE EARL OF DERBY 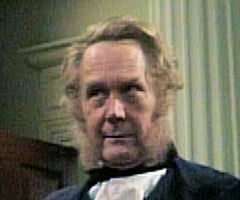 THE EARL OF DERBY

From Wikipedia:
Edward George Geoffrey Smith-Stanley, 14th Earl of Derby, KG, PC (29 March 1799 – 23 October 1869) was an English statesman, three times Prime Minister of the United Kingdom, and to date the longest serving leader of the Conservative Party. He was known before 1834 as Edward Stanley, and from 1834 to 1851 as Lord Stanley. His record was unusual, since he is one of only four British Prime Ministers to have three or more separate periods in office. However his ministries all lasted less than two years, and he held the post for a total of just over four years, less than many other Prime Ministers. 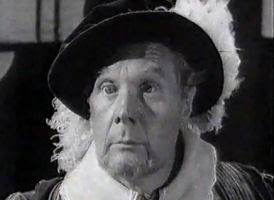 AS SEEN IN:
'The Adventures Of Sir Francis Drake'

Although I have found a Sir Thomas Wenham for the relevant time period in the life of Sir Francis Drake, I'm not sure if he served as an ambassador to Spain from England. The list of I found of English ambassadors to Spain during the reign of Philip II begins just after the time period depicted in the episode "Visit To Spain".

But then, the series did play fast and loose with the timeline established in the Trueniverse, so Toobworld Central will chalk it up to a Toobworld variation.

It's not like time travelers journeyed from the Future to interact with him, as usually happens with the historical figures of Earth Prime-Time...... 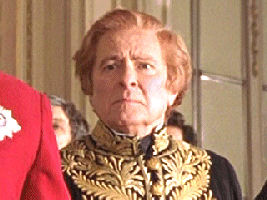 SIR ROBERT PEEL
AS SEEN IN:
'Edward The King'

AS PLAYED BY:
Michael Barrington

From Wikipedia:
Sir Robert Peel, 2nd Baronet (5 February 1788 – 2 July 1850) was a British Conservative statesman who served as Prime Minister of the United Kingdom from 10 December 1834 to 8 April 1835, and again from 30 August 1841 to 29 June 1846. Peel, whilst Home Secretary, helped create the modern concept of the police force, leading to officers being known as "bobbies" (in England) and "Peelers" (in Ireland) to this day. Whilst Prime Minister, Peel repealed the Corn Laws and issued the Tamworth Manifesto, leading to the formation of the Conservative Party out of the shattered Tory Party.

As seen in Toobworld, Charles Bunn is the United States representative for the 5th District in Virginia. (We learned that in last Sunday's episode of 'True Blood'.)

Could it be pozz'ble, just pozz'ble, that Mystic Falls (from 'The Vampire Diaries') is located within the 5th District?

AS SEEN ON TV: LORD MELBOURNE 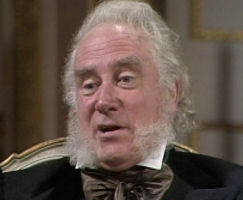 LORD MELBOURNE
AS SEEN IN:
'Edward The King'

AS PLAYED BY:
Joseph O'Conor

Melbourne was Prime Minister when Queen Victoria came to the throne (June 1837). Barely eighteen, she was only just breaking free from the domineering influence of her mother, the Duchess of Kent, and her mother's advisor, John Conroy. Over the next four years Melbourne trained her in the art of politics and the two became friends: Victoria was quoted as saying she considered him like a father (her own had died when she was only eight months old), and Melbourne's daughter had died at a young age. Melbourne was given a private apartment at Windsor Castle, and unfounded rumours circulated for a time that Victoria would marry Melbourne, forty years her senior.

In May 1839, Melbourne's resignation led to the Bedchamber Crisis. Prospective prime minister Robert Peel requested that Victoria dismiss some of the wives and daughters of Whig MPs who made up her personal entourage, arguing that the monarch should avoid any hint of favouritism to a party out of power. As the Queen refused to comply (a course supported by the Whigs) Peel refused to form a new government and Melbourne was eventually persuaded to stay on as Prime Minister.

Lord Melbourne was featured once before here at Inner Toob......

'Edward The King' will be our theme these next two weeks. Why? Because I'll be on vacation!

If this mini-series from the early 1970's piques your interest, then you can find it on Netflix.  And the first few chapters (at least six I believe) are available in segments on YouTube.

Here's the first part of the first episode if you'd like the chance to sample it....