LEAGUE OF THEMSELVES - OLD BLUE EYES 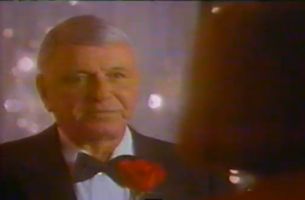 AS SEEN IN:
"Young At Heart"

SPECIAL GUEST APPEARANCE:
This was a fine little film that is certainly a cut above most TV movies. It is a sweet, but never cliched movie about life, and how the arts (in this case music) can help us wade through the difficulties of life. Since the entire movie revolves around the music of Frank Sinatra, any Sinatra fan will enjoy it. The acting and writing are fine, and of course, the music is splendid. I would really welcome a DVD release. In fact, it could even be marketed as Frank Sinatra's final acting appearance (which it was, even though it was only a cameo). - John K. Born

LEAGUE OF THEMSELVES - DEAN MARTIN 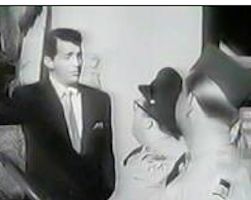 AS SEEN IN:
'The Phil Silvers Show'
"Bilko's Secret Mission"

In March of 2011, Joan Rivers was inducted into the TV Crossover Hall Of Fame for her massive body of work as a member of the League of Themselves.
But she hasn't rested on her laurels since then as she's made more appearances as herself, mostly in commercials (known in Toobworld as blipverts.)
http://youtu.be/h-Vdlsi4jOQ
Joining her in her latest venture for CVS Pharmacy are Nick Cannon and George Hamilton, both playing themselves.  Nick has some more entries to go before he qualifies, but The Tanned One has been eligible for years; I just never noticed.
So I've pencilled him in for 2015 and hopefully there'll be no dire reason for an early induction.
BCnU!
Posted by Toby O'B at 10:21 AM 0 comments

LEAGUE OF THEMSELVES - JOAN RIVERS (AGAIN??)

Labels: As Seen On TV, Hall of Fame, La Triviata, League of Themselves, Life During Prime-Time, Tele-Folks Directory, Theories of Relateeveety, ToobMusic

LEAGUE OF THEMSELVES - JON HAMM 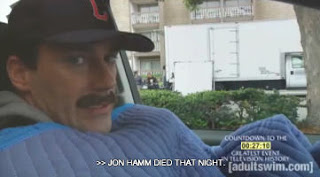 AS SEEN IN:
'The Greatest Event In Television History'
"Simon & Simon"

O'BSERVATION:
I'm placing these short films into the Skitlandia dimension for two reasons.  One - Jon Hamm dies at the end of this first one.  And one day he may show up again in Earth Prime-Time playing himself.  (NOT going there but you can if you want.)

The other reason is that the Rick and AJ Simon are part of the TV Universe and shouldn't be treated as another TV show.  (Although I'm sure other TV shows have done so.)

LEAGUE OF THEMSELVES - BETTY WHITE 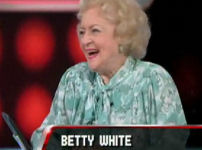 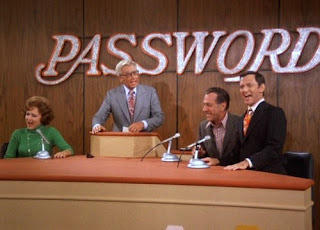 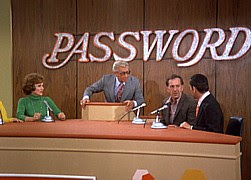 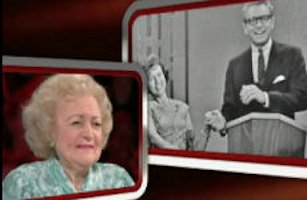 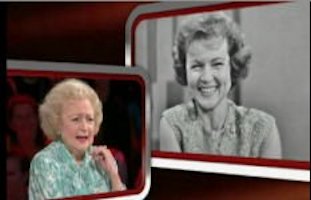 O'BSERVATIONS:
It's because of the 'Odd Couple' episode that 'Password' gets a pass as a legitimate part of Toobworld.

On 'Million Dollar Password', Ms. White was treated to memories of her past association with the original 'Password', but especially of her late husband Allen Ludden, who was the host of the show. 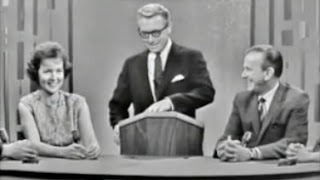 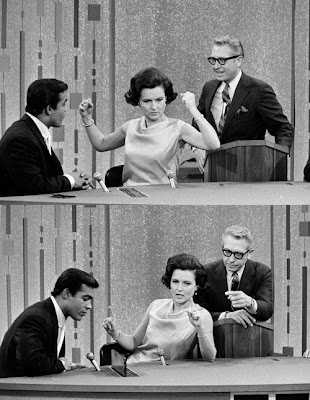 Labels: As Seen On TV, League of Themselves, Life During Prime-Time, Museum Piece, O'Bservations, Reali-TV, Sign of the Crossover, TV Classique 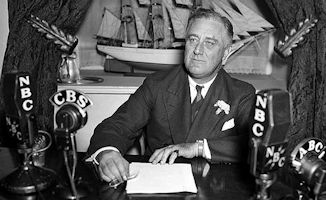 For the November "election" into the TV Crossover Hall of Fame, it's been traditional to induct newsmakers and politicians since it is the month in which we hold our noses as we go into the voting booth.

Presidents of the United States have been inducted into the past, and not all of them are represented in just Earth Prime-Time only.  The many TV movies and mini-series about John F. Kennedy have each been sent to a different TV dimension, just to spread the wealth.  And there are a lot of presidents who won't ever get enough credits to qualify, unless it's in the Tooniverse only.  (I'm looking at you, Millard Fillmore!)

Surprisingly, Franklin D. Roosevelt doesn't have that "oomph" one might expect for a man who served four terms in the Oval Office during the most difficult time faced by America in the 20th Century - from the Great Depression into most of World War II.  And yet there isn't the plethora of productions as can be found for not only JFK but Lincoln, Washington, and Nixon as well.

I think John Adams got a better deal than FDR in TV portrayals over the years (George Grizzard, Burgess Meredith, and Paul Giamatti for example.)

There have been a few actors who have played the role of our 32nd President several times over.  And yet I think with each of them, we need to send them off to alternate TV dimensions. 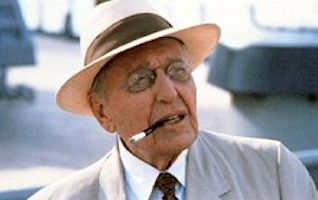 For quantity of portrayals of Roosevelt, you can't beat Ralph Bellamy who played him in seven episodes of 'The Winds Of War' mini-series and in eleven episodes of 'War And Remembrance', the sequel.  (However, because of several major casting changes from one to the next, I think each of those mini-series takes place in different dimensions.)

Plus, Bellamy played the role in the Cineverse in "Sunrise At Campobello", as well as on stage.

Next up would be Stephen Roberts with four TV movies and a mini-series:

"Enola Gay: The Men, the Mission, the Atomic Bomb"
"The Long Days of Summer"
"Ike: The War Years"
"Ring of Passion" 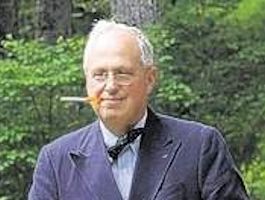 But again, I think they each have to be packed off to other dimensions because of the recastaways with the other key figures in history. 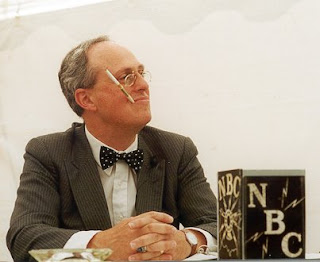 "History in the Making: FDR"
"The Company He Kept"

And there's John Anderson in a very nice characterization for the 'Backstairs At The White House' mini-series.

It would be nice if, as was the case with Abraham Lincoln, FDR showed up in a regular TV series so that we could claim him to be the official portrayal of Roosevelt in Toobworld.  (I was kind of hoping that Edward Herrmann would make one last mini-series or TV movie appearance as FDR because I thought he gave a great performance in the role... but then so did Bob Gunton, twice over.) 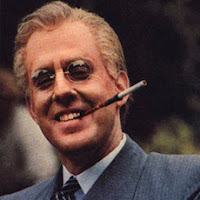 But the closest we have is an animated picture of him in a book brought to life by the teen-aged witch Sabrina.  (And that falls into the same category of magic as Tabitha creating the portal into the picture book about the Giant's beanstalk.) 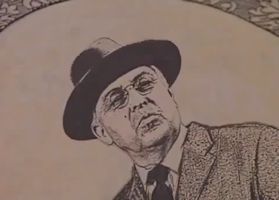 So he's not the Franklin Delano Roosevelt of Earth Prime-Time, but for now we'll be using a picture of Ralph Bellamy to represent the President's televersion. 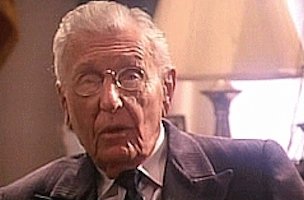 Welcome to the Hall, Mr. President.

LEAGUE OF THEMSELVES - GEORGE HAMILTON 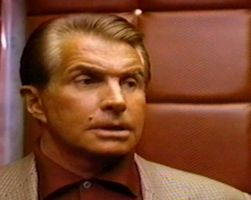 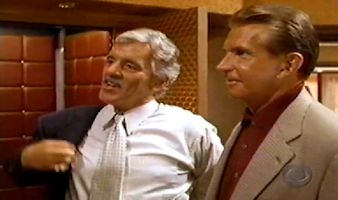 SYNOPSIS:
Upon his return from a 20 year exile, Buddy Faro's first client was his old pal George Hamilton, who believed that somebody was out to kill him. 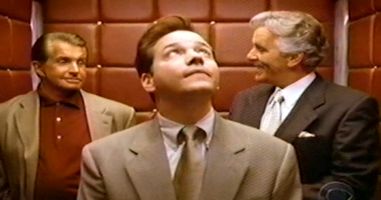 O'BSERVATION:
During the 1970s, George Hamilton played Buddy Faro in a TV series based on his life.

It's a shame the show never caught on; I really enjoyed it.