Stagg is the CEO of Stagg Industries who is most famous in the comic book universe as being the catalyst for the transformation of Rex Mason into Metamorpho.

So even if Metamorpho does make an appearance on 'The Flash' someday, it will have nothing to do with Stagg as far as Comic Book Toobworld is concerned...... 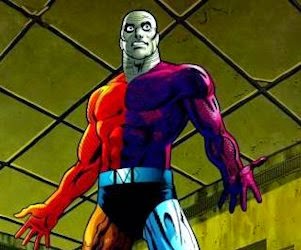 ROGUES FOR A NEW MILLENNIUM 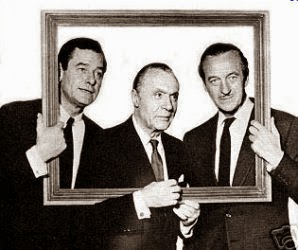 COZI-TV (or is it ME-TV?) has been showing two episodes of 'The Rogues' early each Saturday for several weeks now and I've been enjoying this old chestnut immensely.  First off, I'm a big fan of con men stories (Always regret not buying that book about how America was built by con men.), and as far as TV goes, I've loved the genre since I first discovered Bret Maverick.

When I first read about this show in one of my earliest TV books, I never thought I'd get the chance to see even one episode.  And now I have several in a DVD collection and this retro network (but not the Retro network!) is making sure I see them all.  (Hopefully) 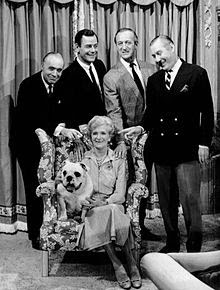 Why 'The Rogues' didn't seem to appeal to enough of the audience of that day in order to be considered a success is a mystery to me.  It starred several big name movie stars - David Niven (as Alec Fleming), Charles Boyer (Marcel St. Clair), and Gig Young (as Tony Fleming) a few years before his Oscar win - in an anthology setting a la 'The Name Of The Game', so that only one had to carry the load every third week, with the others making cameo appearances at best.  (Since I wrote that line, I've discovered that David Niven is hardly pulling his weight at all.  Must have been making a movie?)  The three of them were cousins of the international swindler family of the Flemings/St. Clairs.  Supporting them were Robert Coote as cousin Timmy and Gladys Cooper as Timmy's Mum, Margaret Sinclair.

Thinking about the show and its place in the Toobworld Dynamic, considering the Flemings and St. Clairs in a Wold Newtonesque way that would find possible encounters with other TV characters, it got me considering the idea that there should be an update for 'The Rogues' that could work in the new millennium.

Ratings demographics being what they are today, the lead roles should be played by younger actors although there should still be a few members of a previous generation of the Flemings and St. Clairs who can oversee the operations.  A favorite older actress for me from the UK would fit nicely in a role similar to that of Aunt Margaret - Annette Crosbie.

As for other members of this international clan of "crime"?  Gilles Martini won't be tied down to 'Extant' for much longer, even if it has been inexplicably renewed for a second season.  So he could be the French member of the family.  Andrew McCarthy could pull of the charming American cousin.  Maybe Hugh Grant would be ready to test the waters of a weekly television series.

I'm not saying these suggestions have to be new versions of Marcel, Tony, and Alec.  I'd rather see this new version of 'The Rogues' be a continuation rather than a remake.  The show should acknowledge the members of the previously seen generation of con members in the family and see these new tricksters as new cousins, if not the actual children of the originals.

And the family members wouldn't have to be limited to just replays of the original templates.  Let's get a couple of female cousins into the mix.  Perhaps even a few kinfolk of color.  And Sara Martins, who plays DS Camille Bourday in 'Death In Paradise' would make for a smart and sexy swindler from France.

If they need another elder member of the family, why not bring in Diahann Carroll as her character from 'White Collar'?  Use the good will from that soon-to-end TV show to help launch this new series?

And being a crossover/genealogy enthusiast, I would tie in the English branch of the family, the Sinclairs, to Lord Brett Sinclair of 'The Persuaders!' fame.  Perhaps he finally settled down and sired an heir to the title.  And I think James D'Arcy would be perfect in that role. 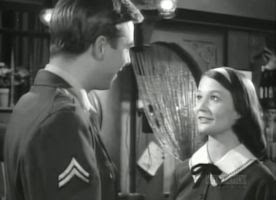 When Corporal Steve Corbett asked Gillian Denby to the movies, she suggested the Deanna Durbin movie that was currently playing in town.

Because of other Toobworldly factors, I believe this episode took place in the latter half of 1944.  If so, then the movie in question was probably "His Butler's Sister".

"His Butler's Sister" was released in America in November of 1943.  It didn't premiere in Sweden until May of 1944.  (UK premiere information was not available at the IMDb.)  Her other two films in 1943 premiered overseas in that same year and that would be too soon for this episode to still be playing and Gillian never got around to seeing it.

Her next film, "Christmas Holiday" would not have premiered in Europe until 1945 and that would have been too late.

So Toobworld is going to fill in the blanks by claiming it was "His Butler's Sister" which also starred Franchot Tone, Pat O'Brien, Akim Tamiroff, Alan Mowbray, and Hans Conreid among others. 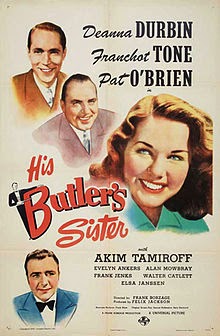 Deanna Durbin would have been 93 years old today.....

These are the movies that were playing in Gulf Haven, Florida, during February of this year:

Knowing the type of humor shown by the writers of 'Cougar Town', I'm wondering if there is a joke in those titles?  Could it be in code?

But it could be "Grounded" and the top line could be read as "Route 33", which is in New Jersey.

I've got a more likely scenario - I'm over-thinking way too much on the TV trivia.

Still, we've got three new additions to the movies of Toobworld.  Or two.  Or maybe even one. 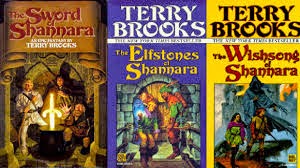 ﻿
MTV is getting into the Thrones game. The former music network is producing 'Shannara', a 10-episode series which is based on the fantasy book franchise written by Terry Brooks.


'Shannara' takes place on Earth Prime-Time thousands of years into the future, so I figure it won't be creating too many temporal Zonks for the timelines of other TV series which are set in the future. 'Shannara' is the family name for the clan at the center of the series who have control over ancient magics, and the lead character will be Amberle, an Elven princess.

"Agile, fit and capable, she has become the first female to be accepted as one of the Chosen, the special group of Elves responsible for the protection and care of the ancient Ellcrys tree. But unlike the rest of the Chosen, Amberle’s dangerous and heroic journey is just beginning."

The first season will be based on the second book in the series, "The Elfstones Of Shannara", which makes me wonder what was wrong with using the first book? Dull story? Not televisual enough?

Poppy Drayton will be playing Amberle.

TV-GPS: THE REPUBLIC OF WEST AFRICA

'Madam Secretary' is in an alternate TV dimension mainly because Keith Carradine plays the President of the United States.  As any Team Toobworld member in good standing knows, the POTUS for Earth Prime-Time is always the same as the current occupant of the Oval Office.  That's because too many TV shows are going to mention the name of that President.  Right now it's Barack Obama, not Conrad Dalton.

I don't know which TV dimension that happens to be though.  I've declared a moratorium on suggesting any show with an alternate President could be following 'The West Wing' or 'Commander-In-Chief' because, to be honest, I've lost track on how many times I've done that.

But whatever world this may be, the atlas of Africa is markedly different from that in the real world: 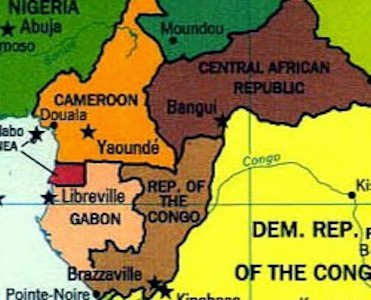 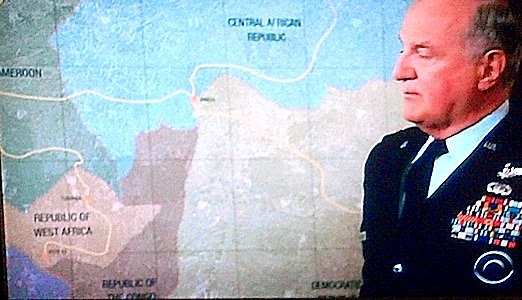 As you can see, the fictional nation of the Republic of West Africa (or RWA as it is called by the staff of the Secretary of State) takes up part of the lands belonging to Cameroon, Gabon, and the Republic of the Congo in Toobworld.

Whether or not it exists in Earth Prime-Time?  I don't know.  I'd have to see if any maps of Western Africa have been shown in other TV shows that are definitely located in the main Toobworld - like 'The Man From UNCLE' or 'Mission: Impossible'.  And even then, it could always be claimed that the Republic of West Africa was formed after those episodes aired.  This would apply to shows which only aired as soon as last season.  It doesn't take long to carve out new countries in the world......

"THE THREE VIRGINS OF ROME" 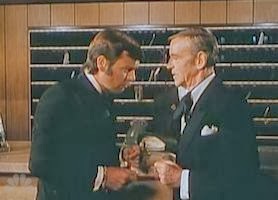 When Alexander Mundy ran into his father Alister in the Rome Cavalieri Hilton in Rome, he was bemused by Alister's choice of the alias under which he registered: "Mr. Gatto".

I think it was Alister Mundy's way of taking advantage of a fellow thief, a younger competitor who may have been an adversary on occasion - Thomas Hewitt Edward Cat.

By using that name, Alister may have also been providing some insurance for himself.  Should anything have gone wrong with his plans to steal (to steal back, actually) a sketch by Raphael Sanzio, the polizia could go looking for T.H.E. Cat instead.....

PS:
This post is dedicated to Win Scott Eckert, guardian and caretaker of the Wold Newton Universe.  He and Matthew Baugh have written a book teaming T.H.E. Cat with Honey West.  Happy birthday Win!