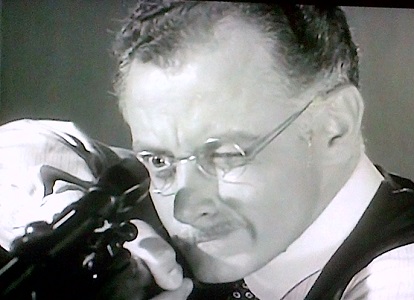 In 1927, Cyril T. Jones was a custom gunsmith who owned and operated a shop in a big city.  (That's according to an on-screen graphic, but we all know it was New York.)  Aong his clients were some of the country's worst mobsters.  Two of those hoods, Big Dan Foley and Joe Felix, gunned him down after he stumbled upon them killing a witness to one of their earlier crimes.  Just before they shot him they apologized since they enjoyed giving them their business, always interested in buying new merchandise from him. But Mr. Jones survived the attack and decided to exact his own revenge rather than risk being killed like that other witness. 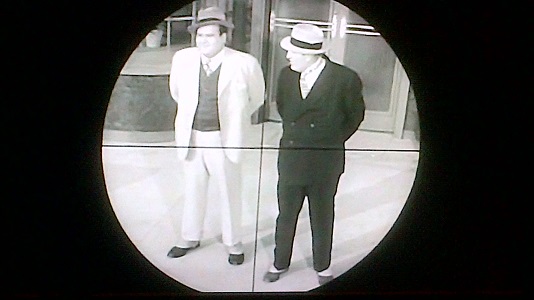 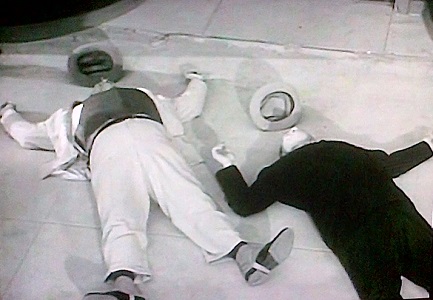 Although it didn't come up in the course of the show, Jones was born in 1887 and was 40 at the time of his shooting.  (This is based on how old Art Carney was when he played the role.) I have no proof for this, but here is my conjecture for a theory of relateeveety which will connect this episode of 'Alfred Hitchcock Presents' to the TV series 'The Honeymooners' and 'Batman'. Cyril T. Jones' wife had died by the time of the episode and his children were already grown, Cyril having married young.  He had a daughter who married a man named Norton and they had twin sons, Edward Lillywhite and Edmund Archeron Norton.  Ed married Trixie (last name unknown, but her first name was Thelma) and he went to work in the New York City Bureau of Water And Sewage Operations.  Meanwhile, his brother Edmund turned to the dark side, eventually becoming the arch-villain known in Gotham City as "The Archer".

(I've written about the Brothers Norton in the past.) Cyril T. Jones probably lived long enough to have seen these events, being 80 by the time 1967 rolled around...... 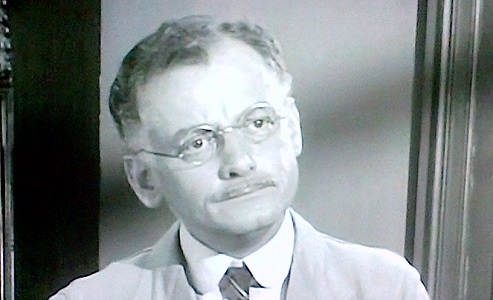 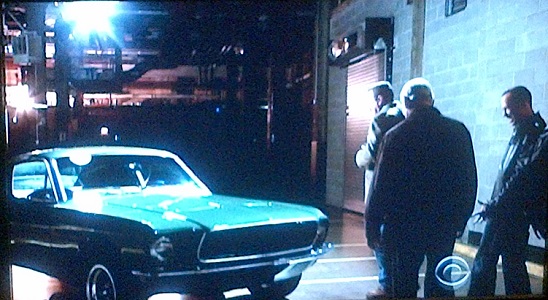 No matter what TV dimension, "Bullitt" is a 1968 movie starring Steve McQueen, Robert Vaughn, and Jacqueline Bissett.  It's probably best known for the high speed car chase through the streets of San Francisco.In "The Bullitt Mustang", the latest episode of 'Blue Bloods', that iconic car belonged to Owen Cairo and was stolen.  'Blue Bloods' takes place in an alternate TV dimension which has a different NYC mayor than in the main Toobworld, where Bill Di Blasio holds that office (as mentioned in 'The Mindy Project', 'The Unbreakable Kimmy Schmidt', 'Law & Order: Special Victims Unit' and in 'Constantine' which takes place in Comic Book Toobworld (as well as in Earth Prime-Time... I think.)I'm kind of surprised that "Bullitt" was never made into at least a TV pilot by 1970.  But there's no mention of it in Lee Golberg's incredible research book "Unsold Television Pilots (1955 through 1989)".  However, at least that keeps it easy to deal with any mentions of the movie, unlike such other films as the franchises for "Back To The Future" and "The Terminator" which were given Toobworld treatments.

Among the TV shows in the main Toobworld which made reference to "Bullitt" are: 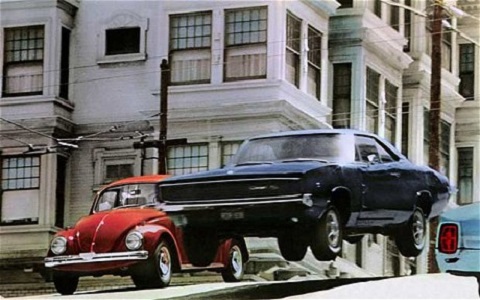 A few years back, I ran a monthly feature here in the Inner Toob blog called "Fanficcer's Friend".  I would find pictures from outside the realm of Toobworld - newspaper photos, screencaps from movies, etc., anything EXCEPT from other TV shows - which could be used to illustrate fanfic about the TV characters played by the actors seen in those pictures, even if the pictures weren't of their characters.  Some examples - a publicity picture of Leonard Nimoy as he signed his first studio contract (Paris from the IMF?) and DeForest Kelley in Westerns (Bones back in Time?). 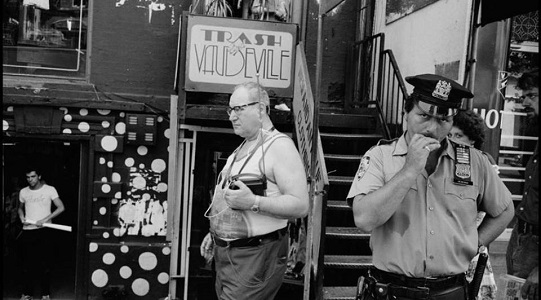 My friend and brother Iddiot Jim Peyton posted this picture in Facebook with the caption:
St. Marks Place, 1978. Legendary clothing boutique Trash & Vaudeville, who outfitted stars like Debbie Harry and The Ramones, announced recently that it will be vacating the St. Marks location that it has inhabited since 1975. Photo by Leonard Freed.

Now, doesn't that cop look like NYPD detective Andy Sipowicz in his younger days as a patrolman? 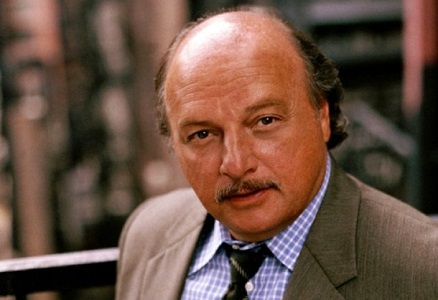 Toobworld Central accepts recasting when it comes to the aging process, so no matter who this real-life police officer is/was, we have no trouble in claiming that in Toobworld he was Sipowicz.

Eventually Andy Sipowicz will be inducted into the Television Crossover Hall of Fame, probably as part of the Birthday Honors List, since we made valid (at least I think so!) arguments in the blog that he knew Henry and Shawn Spencer of 'Psych' and that one of his ex-wives had an affair with 'NCIS' agent Tony DiNozzo.

Thanks for finding that picture, Jimbo! 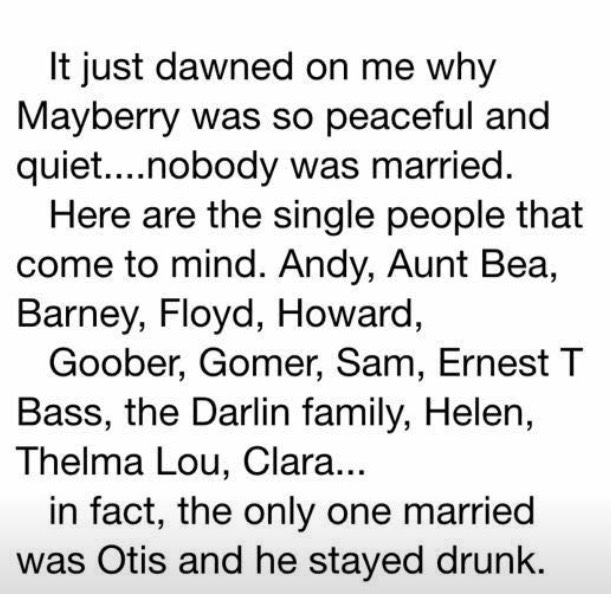 This meme is a fail, of course.  Emmett Clarke, who ran the fix-it shop, was married to Martha.

Not that it was a happy marriage all the time.....

Thanks to my cousin Coco for bringing this to my attention...... 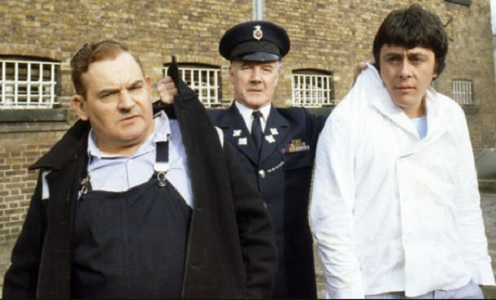 BBC1 may be bringing 'Porridge', one of Ronnie Barker's best TV shows*, back to Toobworld in order to celebrate 60 years of comedy on the Beeb.  (They're marking 'Hancock's Half Hour' as the beginning for the genre.)

Back in September the BBC announced: "BBC1 will mark our enduring affection for all the great comedy characters we have met over the 60 years by enlisting the biggest names in British comedy writing and performing to revisit loved classics alongside launching new shows in a landmark comedy season." 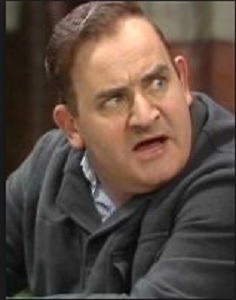 A major sticking point for a 'Porridge' revival is that Ronnie Barker passed away in 2006, so there's no hope in bringing back Norman Fletcher for another stretch.  Richard "Godber" Beckinsale, Fulton "Mr. Mackay" Mackay, Brian "Barraclough" Wilde, Sam "Bunny" Kelly, and Michael Barrington, who played Governor Venables have all passed away as well.  But Christopher Biggins AKA Lukewarm is still with us, as are David Jason, Barker's co-star in 'Open All Hours' and Peter Vaughn, most recently seen in 'Game Of Thrones' as Maester Aemon.  They played Blanco and Harry Grout, respectively.

Luckily, they're not even thinking in terms of a remake with all new actors playing the roles of Fletch, Lennie Godber, Mr. Mackay, Mr. Barraclough, Bunny, and Lukewarm.  Instead, they're tackling a continuation in which a new actor will be playing Fletch's grandson (also called "Fletch" - hey, it's a great nickname!) who is locked up for computer hacking.  I'm okay with that.

Nothing is official yet; the BBC won't confirm what classic Britcoms are under consideration for new productions to be included in their Landmark Sitcom Season.  Hopefully all of the other candidates will be given this same continuation treatment rather than subjecting the loyal fans to remakes.  Nobody needed a new Napoleon Solo and Ilya Kuryakin this past year.  But I'm sure they would have welcomed new agents working for UNCLE in the 21st Century. 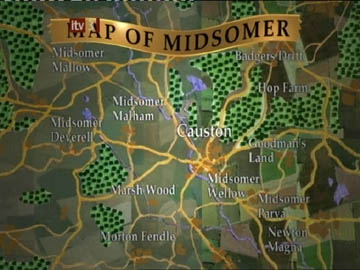 Everybody always talks about the high murder rate in Cabot Cove, Maine, but Midsomer county in England might top their record.  Of course, that's looking at Midsomer county as a whole - if you just went by individual villages in the county, the spread thins out.

And there are quite a number of villages in Midsomer!  I don't know if I'll ever see all of the episodes of 'Midsomer Murders', and I haven't been keeping track of those that I have seen, but it seems that several of these villages had to be used over again in other storylines.  (They certainly have had more than their fair share of murders in just the separate investigations!)


If any other location could give either Midsomer or Cabot Cove a run for their money in the murder game, it would have to be Oxford University......

For those of you unfortunate enough to be stuck in the real world and unable to visit the "real" Midsomer, you can take the various trail tours in the Wallingford area.

USA Network used to be a master at making these promotional commercials for their shows.  The characters from 'Burn Notice', Psych', 'Royal Pains', 'Monk', 'The Dead Zone', etc, have all interacted with each other in these promos.  Many of them could have been pozz'ble, just pozz'ble, in Earth Prime-Time, but some just have to be considered only to be found in the Promoverse.  For instance: the interaction between 'Monk' and 'The 4400', and 'Psych' with 'Defiance'.

All of the entries for the Promoverse may just be small offerings, but they promise a whole world behind them.....