LEAGUE OF THEMSELVES - LARRY BIRD 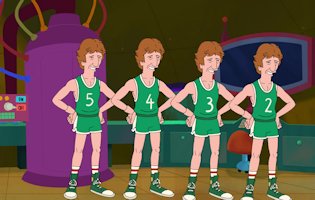 Larry Bird shares this birthday with two very special people in my life - my sister/godchild Leah and her son Thomas.....

Labels: Alternateevee, As Seen On TV, La Triviata, League of Themselves, Life During Prime-Time, My So-Called Life, O'Bservations, Tooniverse, TV timeline, Twipped from the Headlines

"DOCTOR WHO" IN THE PROMOVERSE

You will be seeing this ITV ident again here come Christmas Eve........
Russell T. Davies wanted to isolate the Time Lords of Gallifrey to the Universe of Earth Prime-Time.  (Actually to its own private universe - all showrunners see their shows as being alone in their own universe.)
But for the Toobworld Dynamic, that just can't be.  There was a Gallifrey in every TV dimension - but not always with Time Lords, apparently.
With the major alternate TV dimensions, we've seen proof of alternate Time Lords:
The Tooniverse - 'The Simpsons' & 'Futurama'
Skitlandia - "The Curse Of Fatal Death"
Black Toobworld - 'Lenny'
As for the Evil Toobworld, we didn't see the Doctor's devilish doppelganger when the Third Incarnation was trapped there, as seen in the story "Inferno".
And then there's the Promoverse.
We know the Doctor exists in the Promoverse, that dimension which sometimes combines shows from the same network, but always with the intent to promote the shows involved.
So in the BBC Christmas ident of 2011, we saw Smith's Incarnation of the Doctor playing Twister with Amelia Pond and a Cyberman. 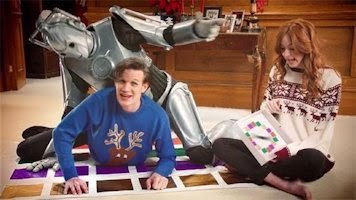 And with the Doctor in the Promoverse, we can now make the assumption that his adventures in Earth Prime-Time were echoed in that world as well.
And we may have evidence of that in a new ident, even though it's not from the BBC.
In the latest ITV ident, various period dramas and contemporary mysteries all combined in one expansive mansion.
Here are the players we see in the promo:
Hugh Bonneville (Lord Grantham - Downton Abbey), Paddy Considine (Mr Whicher -The Suspicions of Mr Whicher), Katherine Kelly (Lady Mae Loxley- Mr Selfridge), Martin Clunes (Dr Martin Ellingham- Doc Martin), Jeremy Piven (Mr Selfridge), Anna Maxwell Martin (Susan Gray - The Bletchley Circle), Jim Carter (Carson - Downton Abbey), Shaun Evans (Detective Constable Endeavour Morse - Endeavour), Rupert Penry-Jones (DI Chandler -Whitechapel), Phil Davis (DS Miles - Whitechapel) Brenda Blethyn (DCI Vera Stanhope - Vera), David Leon (DS Joe Ashworth - Vera) Aisling Loftus ( Agnes Towler - Mr Selfridge) and Joanne Froggatt (Anna Bates -Downton Abbey) were filmed for these specially shot scenes for the new Where Drama Lives trail.
They are joined by Inspector Morse (John Thaw - Morse), DCI Jane Tennison (Helen Mirren – Prime Suspect), Sebastian Flyte (Anthony Andrews - Brideshead Revisited) and Hercule Poirot (David Suchet - Poirot) who were added through post production techniques, representing some of the channel’s defining, iconic characters. Viewers will also see Sebastian’s teddy bear, Aloysius.
So they're all blended together from different time periods and locales and we that happen before: 'Doctor Who' - "The Wedding Of River Song", in which Winston Churchill, ancient Romans, dinosaurs, and steampunk technology were all sharing the same timeline in London. 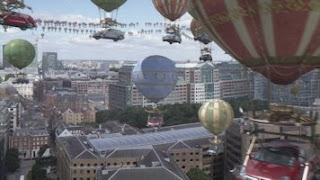 And now we have more proof that the Doctor is in the Promoverse!  In the CBS promo for the Monday night lineup, a planet explodes and we see the TARDIS spin by - all in the first six seconds.  Blink and you miss it!
BCnU!

LEAGUE OF THEMSELVES - PATRICK STEWART 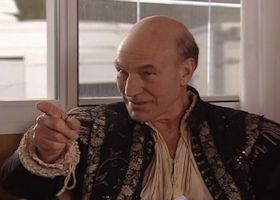 LEAGUE OF THEMSELVES - BILL BUCKNER 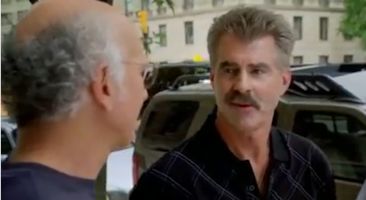 AS SEEN IN:
'Curb Your Enthusiasm'
"Mister Softee"

Labels: As Seen On TV, La Triviata, League of Themselves, Life During Prime-Time, Online TV

LEAGUE OF THEMSELVES - DAN RATHER 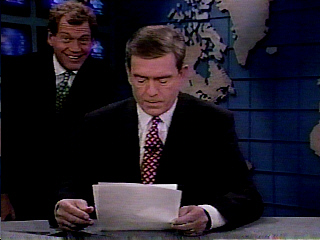 DAN RATHER
[with David Letterman]

AS SEEN IN:
'The Late Show with David Letterman'
"CBS Evening News with Dan Rather"

Labels: Alternateevee, As Seen On TV, League of Themselves, Life During Prime-Time, Skitlandia, TV On TV, Zonks 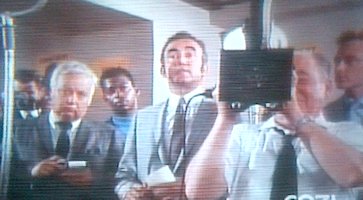 JAMES BACON
From Wikipedia:
James "Jim" Bacon (May 12, 1914 – September 18, 2010) was an American author and journalist who also worked as an actor in film and television. He wrote historical accounts of his years observing Hollywood and a biography of Jackie Gleason.

After leaving the Associated Press in 1966, he wrote briefly for the Hollywood Reporter and then for 17 years for The Los Angeles Herald-Examiner. He had published a weekly column in Beverly Hills magazine since 1996.

Although a columnist by trade, Bacon appeared in numerous films, generally in walk-on cameos, often as reporters or newsmen.He appeared in all five films in the "Planet of the Apes" series, becoming the only actor to do so.

VERNON SCOTT
From the UPI:
Scott had been a Hollywood reporter and columnist for UPI and its predecessor, United Press, for 52 years. He covered movies, television, actors, directors, producers and other filmmakers. He provided a radio version of his interviews for a dozen years on the UPI Radio Network.

Labels: As Seen On TV, La Triviata, League of Themselves, Life During Prime-Time, Special Guest Appearance, TV On TV, Wikipediaphile

Michael Ansara is probably the first person ever to be inducted into the TV Crossover Hall of Fame as two different characters in the same year.  (Adam West being inducted as both his live-action and cartoon self doesn't count.)

There would have been a third, but I decided to hold back on the choice

For December, I decided his vocal interpretation of the 'Batman' villain Mr. Freeze seemed an appropriate choice for the first of the wintry months.  (It's not the first time a Batman villain has been inducted into the Hall in December.  The Penguin became a member in December of 2005.) 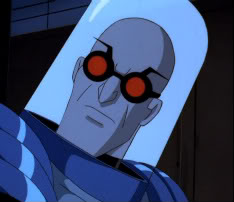 Other actors have played the role for the Tooniverse, and they are also counted among his credits for entry into the TVXOHOF.  But it's Mr. Freeze as played by Ansara who will be the official voice of the character for the Tooniverse.

So here are the credits for Mr. Freeze, as voiced by Michael Ansara:
And here are the other credits which qualify him for entry: 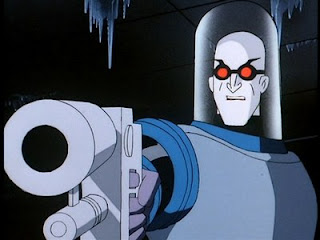 So in honor of the late Michael Ansara, we welcome Mr. Freeze into the TV Crossover Hall of Fame.

LEAGUE OF THEMSELVES - BARRY MANILOW 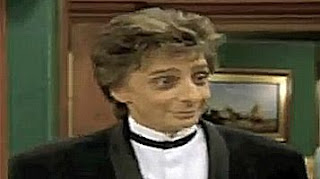 Labels: As Seen On TV, League of Themselves, Life During Prime-Time, Online TV, ToobMusic

LEAGUE OF THEMSELVES - ROBIN WILLIAMS II 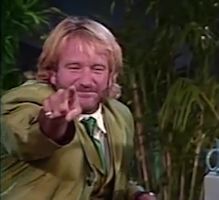 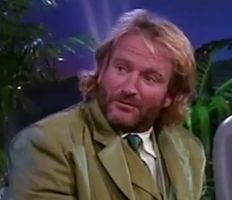 AS SEEN IN:
'The Larry Sanders Show'
"Hank's Contract"