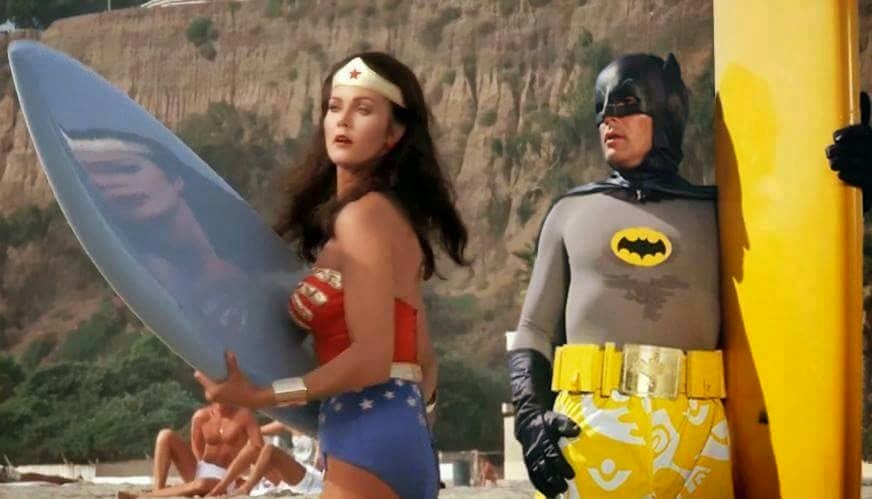 O'Bviously this never happened on our TV screens, but that's not to say it couldn't have happened on Earth Prime-Time.  We just were not privy to the event.

Princess Diana, AKA Wonder Woman, is an immortal who only appeared on Earth Prime-Time (as far as the Trueniverse audience is concerned) during World War II and the mid-1970s.  But she was around since the Age of Legend and is still going strong on Themicyrae, better known as Paradise Island.

So it's pozz'ble, just pozz'ble that she returned to the land of mortal men during the 1960s and hung out and hanged ten with Batman.  In fact, I think she was part of the ill-fated and unseen Justice League of America of Earth Prime-Time which began in the late 1950s and featured as its core members Superman, Batman, and Wonder Woman.

By the time Wonder Woman came back to surf with the Caped Crusader, the Man of Steel had been dead for a few years.  (This according to the Toobworld timeline only.)

GAME OF THE NAME - A BIT OF TAA

I was never a big fan of 'Three's Company' with John Ritter, but I do have fond memories of the sequel 'Three's A Crowd'.  That's because Ritter's co-star was a friend from my college days, Mary Cadorette.

In one of the last episodes of 'Three's Company', Mary's character of Vicky Bradford was introduced.  She was a stew-# sorry, she was a flight attendant for Trans-Allied Airlines and she and Jack Tripper "met cute" during one of the flights she was working.

In the 22nd episode of the one-season series, Trans-Allied Airlines - or TAA - got more attention:

Jack has stardom go to his head when he appears as a passenger along with Vicky in a commercial for her airline (Trans Allied Airlines). However, turbulence occurs on the set when Jack and the temperamental director get into a fight.

Whether or not that commercial ever got finished, TAA had other venues in which to publicize themselves...... 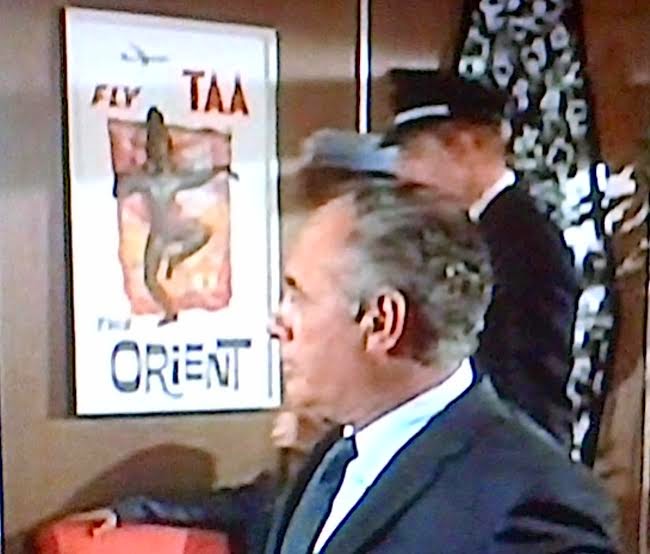 'THE NAME OF THE GAME'
"NIGHTMARE"

This poster was at LAX, where Herb Whitmer (seen above) was waiting for the arrival of Crime magazine editor Dan Farrell, with his mother and his daughter, from Minneapolis.

This serves as an unofficial link between 'The Name Of The Game' and 'Three's A Crowd', but it's good enough for this Caretaker..... 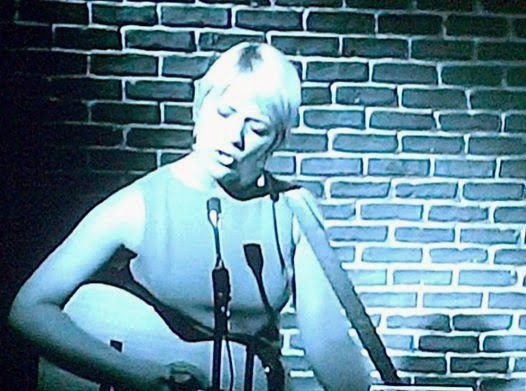 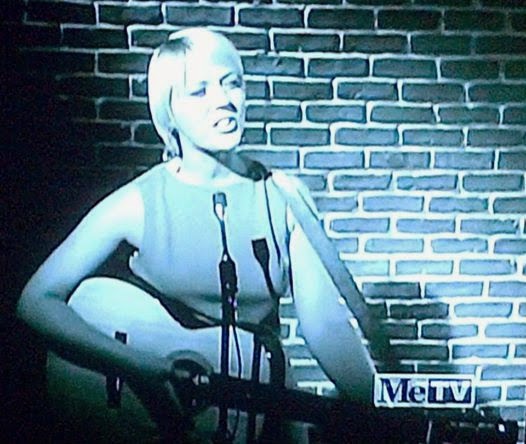 This is Barbara Dana, as seen in "Captive Audience", an episode of 'The Alfred Hitchcock Hour'.  She is listed as "Folk Singer" in the IMDb credits (only by name in the show's credits.)

The episode took place in San Francisco and her scene was in a small, hip club.

Ms. Dana only has two acting credits on her resume, both of them in 1962 episodes of TV series. Her other role was in the series finale of 'Checkmate'.

That took place in San Francisco... And she played a gospel singer. No name given.

I think we all know where I'm going with this. But I'll also add that I think she was playing the televersion of herself in both shows. And she easily crossed genres with her singing career.


5] Frazer Hines to Hamish Wilson as Jamie McCrinnon ('Doctor Who')

4] Dick York to Dick Sargent as Darrin Stephens ('Bewitched')Connected to this - Alice Pearce to Sandra Gould as Mrs. Kravitz.  Probably the saddest recastaway.....

And the Number One favorite "recastaway"


1] All of the Doctor's regenerations ('Doctor Who')

And since you didn't ask - the worst?

George Sanders to Otto Preminger to Eli Wallach as Mr. Freeze ('Batman')
I ended up having to throw those following episodes into other TV dimensions.  But it;s nice to know Adam West and Burt Ward are out there fighting the good fight in more than one TV dimension......


Here are a couple more TV memories for the late Rod Taylor....


Episodes from 'Hong Kong' and 'Bearcats!' can be found online at YouTube and I'll recommend them, if only for their Classic Television History contributions.  But 'Bearcats!' was a favorite of mine when it came out because I was into that time period of 1914, just prior to World War I.  This was probably due to my infatuation with the TV show 'Nichols' which starred James Garner.  It was also set in the American Southwest of 1914.
I wasn't into the concept of the Toobworld Dynamic at that point in my life, but if I had been, I'm sure I would have cobbled together some fanfic in which the characters from both of these shows teamed up.
And I'd probably throw some incarnation of the Doctor and one of his companions into the mix as well if I decided to try writing one today.  Yeah, I'm just that O'Bsessed......
BCnU!
﻿
Posted by Toby O'B at 1:30 AM 0 comments


Actor Rod Taylor passed away this past week, just a few days shy of his 85th birthday.  As an actor he will be best remembered for two movies - Hitchock's "The Birds" and George Pal's version of HG Wells' "The Time Machine".  Two other favorites of mine are "36 Hours" and "The Glass-Bottomed Boat" (which has been officially absorbed into the TV Universe thanks to a cameo by Robert Vaughn as Napoleon Solo.)

But he did a lot of work on TV as well - leading roles in TV series like 'Bearcats!', 'Hong Kong', 'The Oregon Trail', and 'Outlaws', plus a lengthy co-starring gig on 'Falcon Crest' and a recurring role with 'Walker, Texas Ranger'.

His best TV performance can be found just past that signpost up ahead... in 'The Twilight Zone'.  "And When The Sky Was Opened" is an important episode for the Toobworld Dynamic, one of its "Essentials", for the splainin it provides when a TV character disappears with no reason given - as if they never existed.  And yet it's a disquieting splainin which answers nothing....

California Democratic Sen. Barbara Boxer, a tenacious liberal whose election to the Senate in 1992 heralded a new era for women at the upper reaches of political power, announced Thursday she will not seek re-election to a new term next year.
Boxer's retirement sets off a free-for-all among a new generation of California Democrats, who have had few offices to aspire to while Boxer and Sen. Dianne Feinstein had a lock on the state's U.S. Senate seats.

A staunch supporter of abortion rights, gun control and environmental protections, Boxer has said she is most proud of the vote that she cast against the war in Iraq. 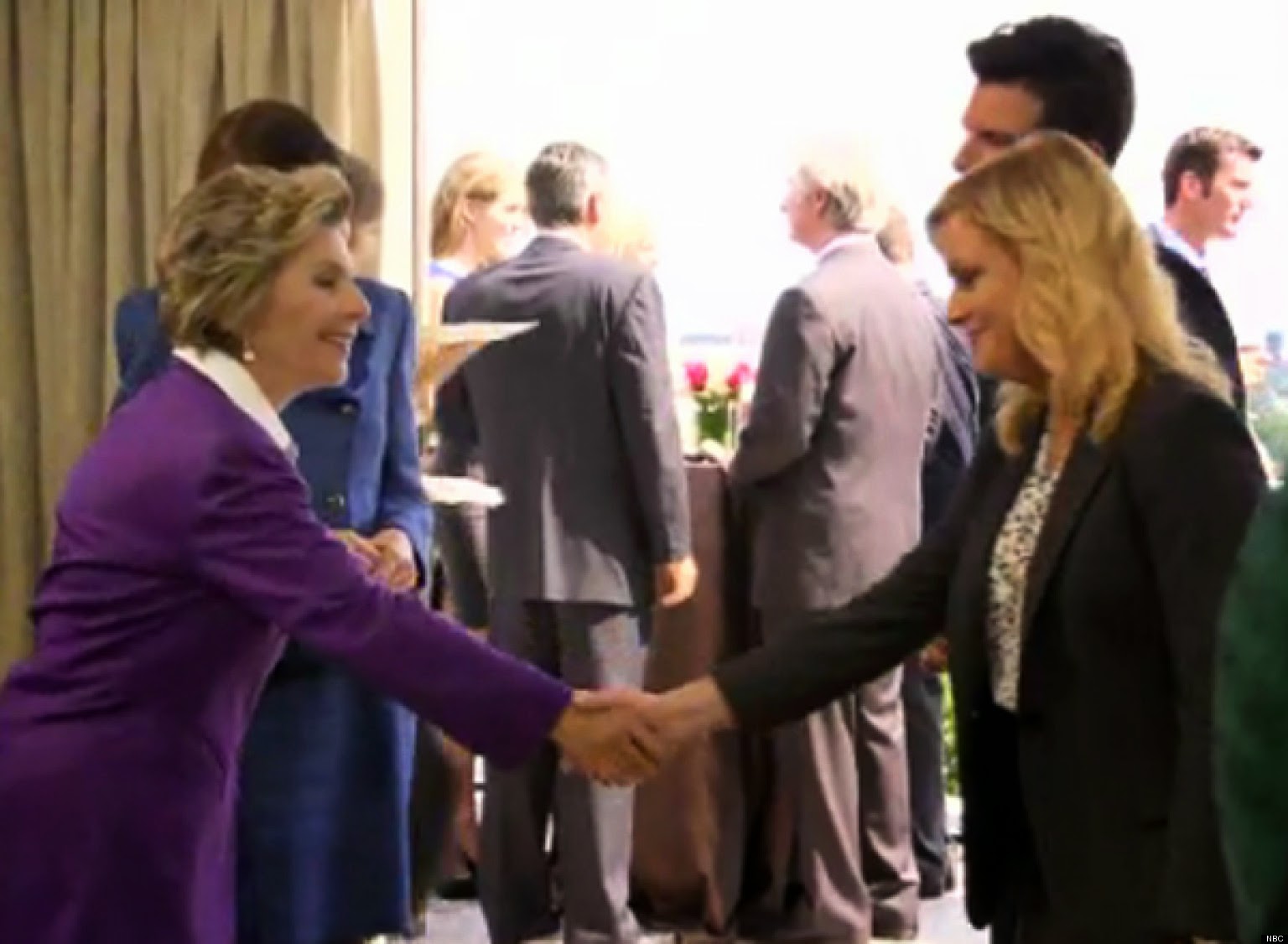 ﻿
In Toobworld, Senator Boxer will make it into the Television Crossover Hall Of Fame as a member of the League of Themselves, thanks to the following appearances:
'Murphy Brown'
- Brown vs. the Board of Education (1994)
'Gilmore Girls'
- Those Lazy-Hazy-Crazy Days (2002)
'K Street'
- Week 3 (2003)
'Curb Your Enthusiasm'
- The Anonymous Donor (2007)
'Parks and Recreation'
- Ms. Knope Goes to Washington (2012) 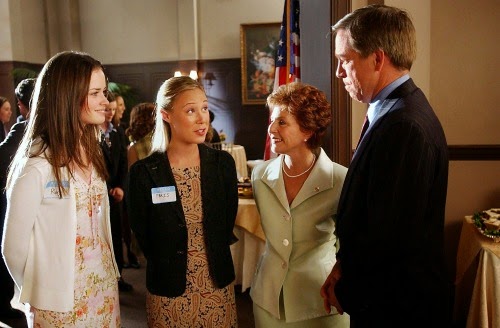 And I have no problem with adding these two appearances since both Kathy Griffin and Stephen Colbert present highly fictionalized personae of themselves on the Toob.
'The Colbert Report'
- Barbara Boxer (2006)
- Sen. Barbara Boxer (2009)
'Kathy Griffin: My Life on the D-List'
- Kathy Goes to Washington (2010)
BCnU!
Posted by Toby O'B at 12:30 AM 0 comments

Labels: Hall of Fame, League of Themselves, Twipped from the Headlines


I still can't wrap my head around the idea that Donna Douglas was 81 years old when she passed away on New Year's Day.  Perhaps it's because she's encased in video amber, forever the sweet country girl Elly Mae Clampett from 'The Beverly Hillbillies'....


I'm fairly certain Elly Mae Clampett is eligible for the Television Crossover Hall of Fame, but I'll have to check on that.