This blog post was originally going to run on January 25 as a Monday Memorial TVXOHOF Tribute.  But I realized that if the Television Crossover Hall of Fame was going to showcase Black History Month with the February inductee, than it should be someone who actually made history and not just another black TV character.  So I held this back until today…. 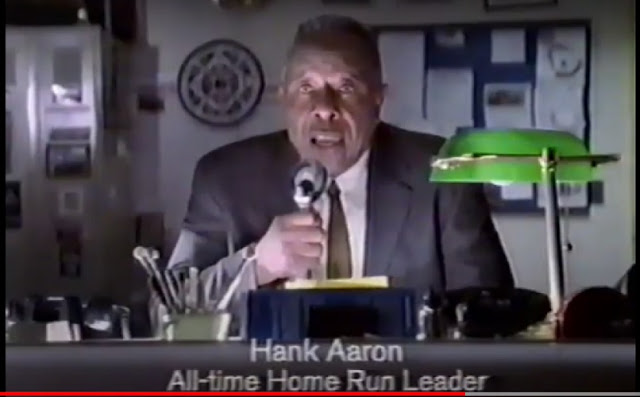 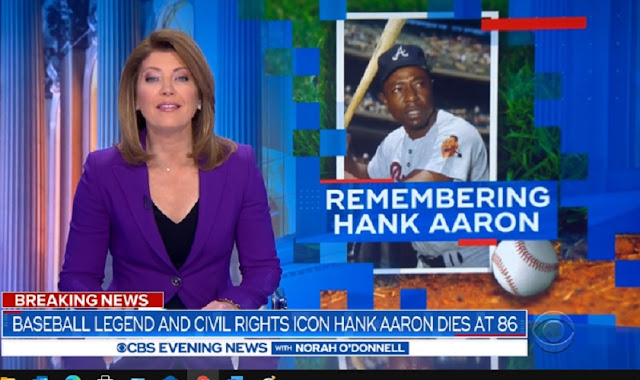 Hank Aaron, who fought vile racial prejudice in his lonely vigil to break Babe Ruth’s all-time major league home run record, and went on to also establish the all-time records for RBI, total bases and extra base hits as one of the greatest hitters in baseball history, died Friday morning.  [January 22, 2021]

From Wikipedia:
Henry Louis Aaron (February 5, 1934 – January 22, 2021), nicknamed "Hammer" or "Hammerin' Hank," was an American professional baseball right fielder who played 23 seasons in Major League Baseball (MLB), from 1954 through 1976. He spent 21 seasons with the Milwaukee/Atlanta Braves in the National League (NL) and two seasons with the Milwaukee Brewers in the American League (AL). Aaron is regarded as one of the greatest baseball players of all time. His 755 career home runs stood as the MLB record for 33 years, and he still holds many MLB offensive records. He hit 24 or more home runs every year from 1955 through 1973, and he is one of only two players to hit 30 or more home runs in a season at least fifteen times. 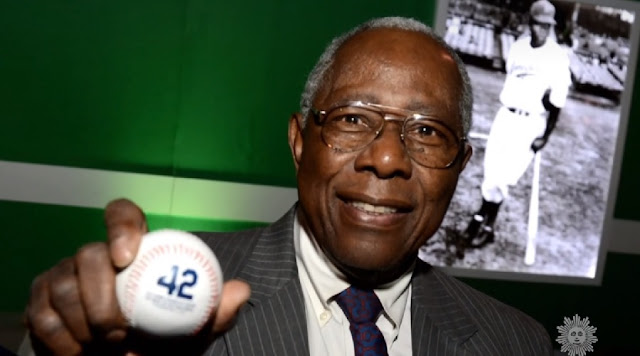 In 1999, The Sporting News ranked Aaron fifth on its list of the "100 Greatest Baseball Players". In 1982, he was inducted into the National Baseball Hall of Fame in his first year of eligibility. 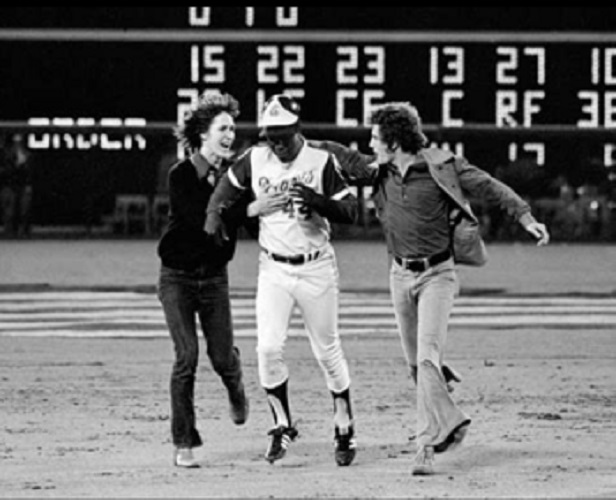 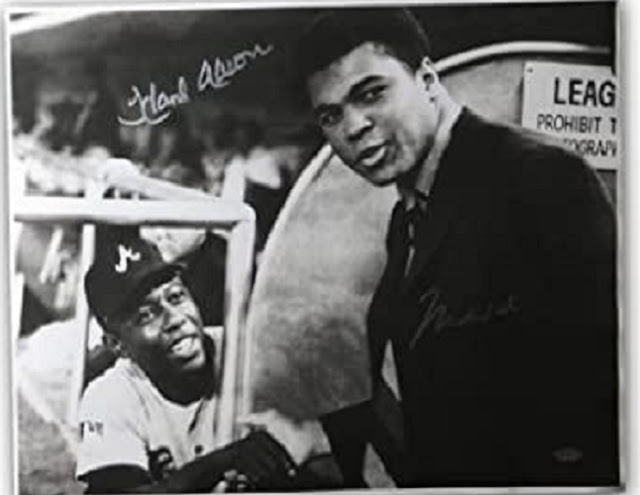 TWO TVXOHOF ALL-TIME GREATS
Aaron played the vast majority of his MLB games in right field, though he appeared at several other infield and outfield positions. In his last two seasons, he was primarily a designated hitter. Aaron was an NL All-Star for 20 seasons and an AL All-Star for 1 season, and he holds the record for the most All-Star selections (25), while sharing the record for most All-Star Games played (24) with Willie Mays and Stan Musial. He was a three-time Gold Glove winner, and in 1957, he won the NL Most Valuable Player (MVP) Award when the Milwaukee Braves won the World Series. Aaron holds the MLB records for the most career runs batted in (RBI) (2,297), extra base hits (1,477), and total bases (6,856). Aaron is also in the top five for career hits (3,771) and runs (2,174). He is one of only four players to have at least 17 seasons with 150 or more hits.  Aaron is in second place in home runs (755) and at-bats (12,364), and in third place in games played (3,298). At the time of his retirement, Aaron held most of the game's key career power hitting records. 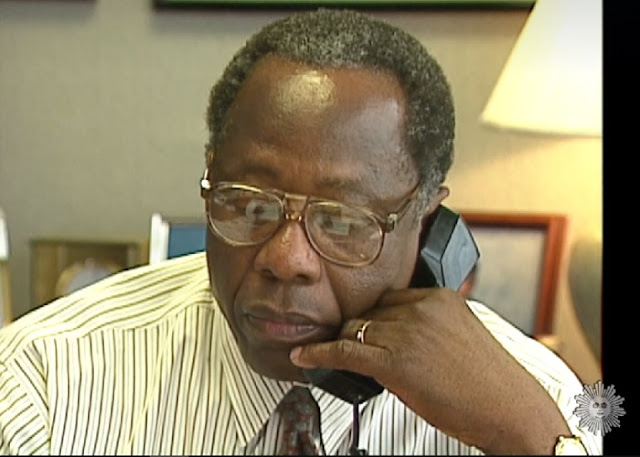 After his retirement, Aaron held front office roles with the Atlanta Braves, including senior vice president. In 1988, Aaron was inducted into the Wisconsin Athletic Hall of Fame. In 1999, MLB introduced the Hank Aaron Award to recognize the top offensive players in each league. He was awarded the Presidential Medal of Freedom in 2002. He was named a 2010 Georgia Trustee by the Georgia Historical Society in recognition of accomplishments that reflect the ideals of Georgia's founders. Aaron resided near Atlanta. 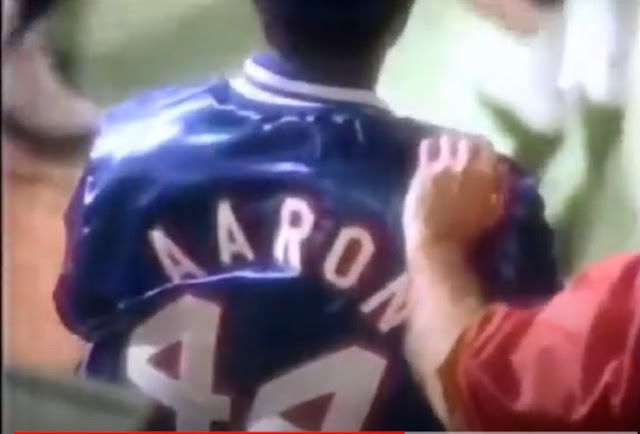 It’s time Hank Aaron entered one last Hall of Fame.  Here are the TV show episodes in which he appeared as a member of the League of Themselves and which qualify him for the Hall of Fame: 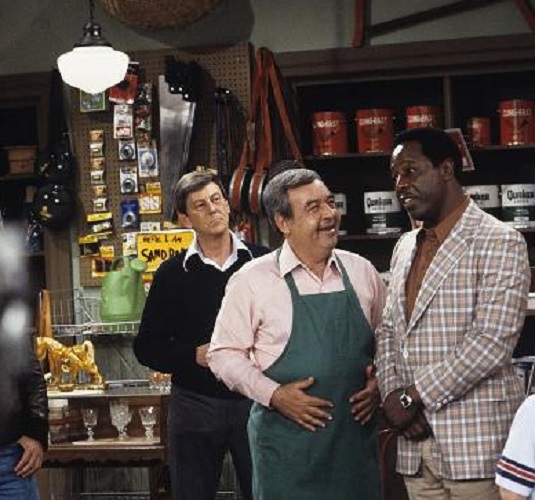 Happy Days
- The Hucksters (1980)
When Richie's amateur commercial doesn't bring more customers into his Dad's hardware store, the Cunninghams hire a smooth-talking advertising expert who promises a huge increase in business but who also has a hidden agenda that challenges Howard's business ethics. 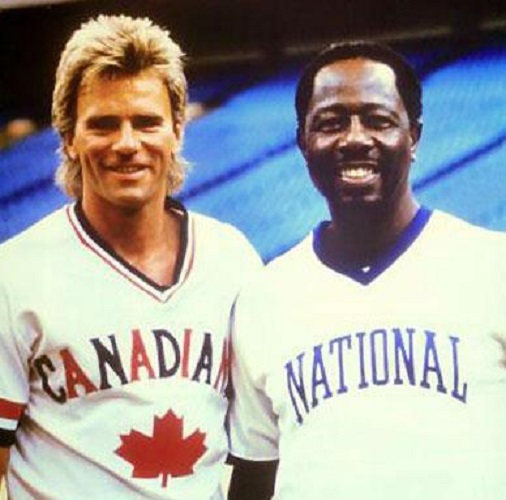 MacGyver
- Back from the Dead (1987)
The episode featured Joe Santos as Jimmy Kendal, a former mob informant now in the witness protection program with a new identity as a minor league baseball manager. With the team getting ready for the playoffs, Santos’ character brings in a professional ballplayer to help the team prepare for the competition. Hank Aaron trots out to the field to face the young pitcher, who, after a pep talk from Santos, strikes him out. 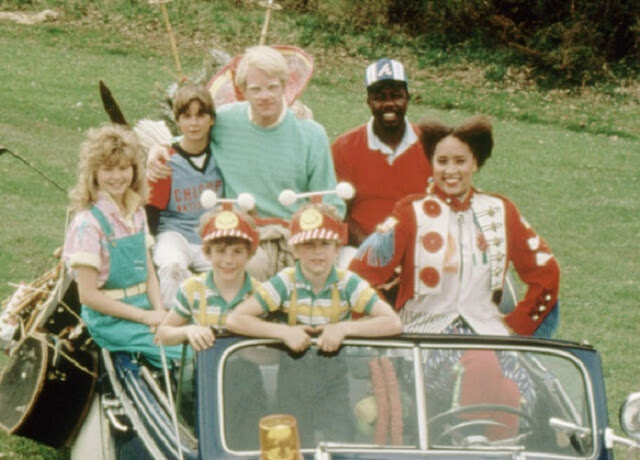 School principal and widowed father Paul Sutton (Ed Begley Jr.) hires a housekeeper named Ida Early (Jackée Harry) to help care for his home and four children where she amazes the kids with her tall tales, magical ways & stories about famous friends of hers (such as baseball legend Hank Aaron). 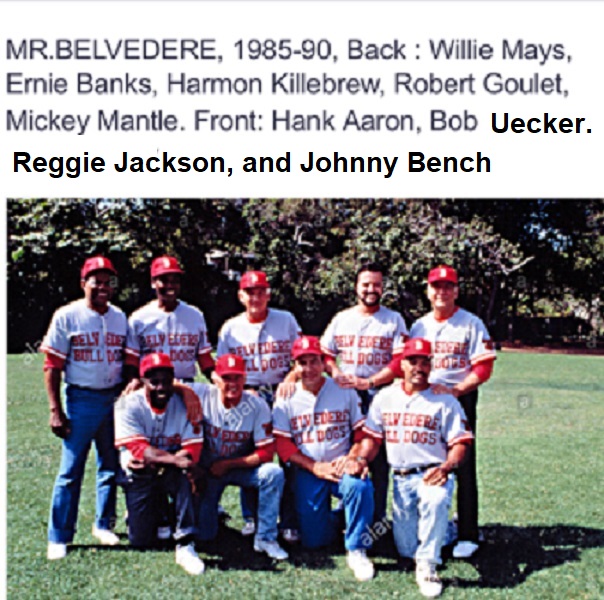 Mr. Belvedere
- The Field (1989)
It's George's birthday. He's been pushing Wesley to excel at baseball and when Wesley decides to cheat, George is upset at him and Wesley say he did it for him. When they throw George a party, and help him relive some of life's greatest moments.  But that only shows him how he has done nothing he set out to do, like play baseball with some greats. 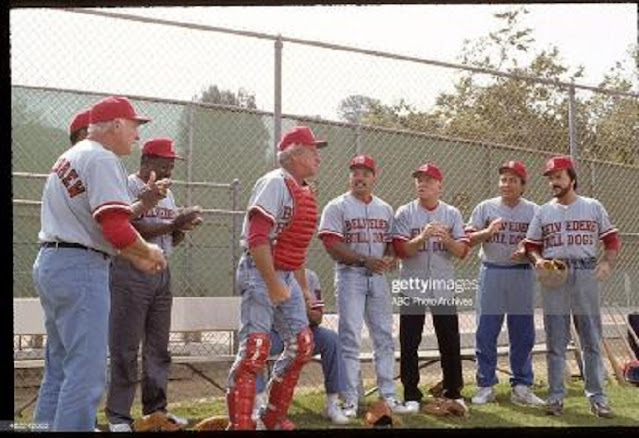 So Belvedere decides to give George a different present. The next day at Wesley's game, he arranged for some great players [Willie Mays, Ernie Banks, Harmon Killebrew, Robert Goulet, Mickey Mantle. Hank Aaron, Johnny Bench, Reggie Jackson] to be there. Along with George and Robert Goulet, they play Wesley's team. 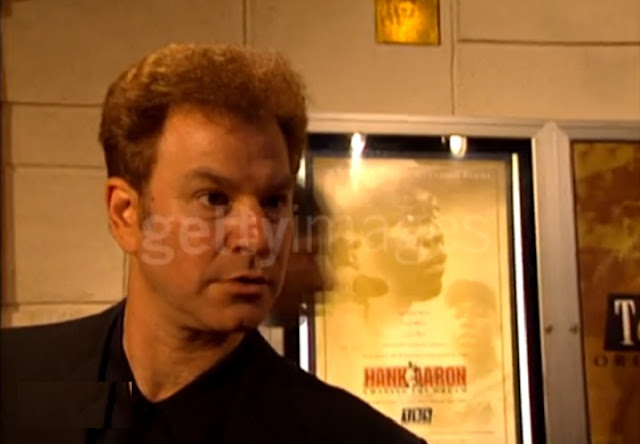 O'Bservation - It's hard to find frame grabs from 'Arli$$' online.  So this will have to serve - Robert Wuhl, who played Arliss, at the premiere for the documentary "Hank Aaron: Chasing The Dream". 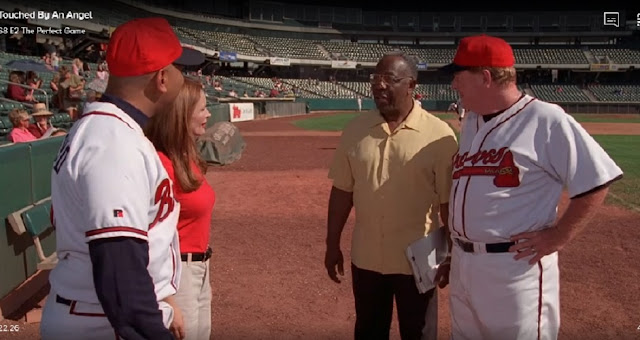 Touched by an Angel
- The Perfect Game (2001)
A father tries to control his son's life and is obsessed with his baseball performance. The angels must help heal the father and son relationship by showing the father that he must first heal the relationship he has with his own father. 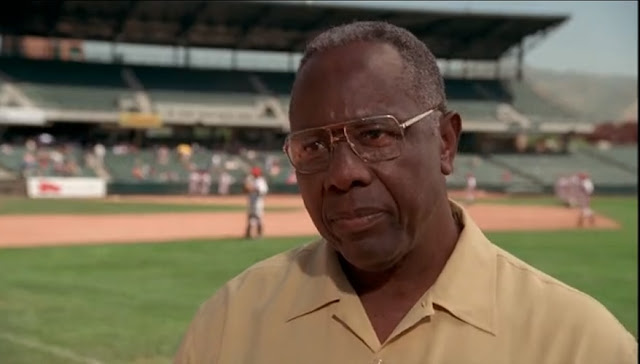 Aaron came out from the Braves main office to scout how the son did as a pitcher.
THE TOONIVERSE 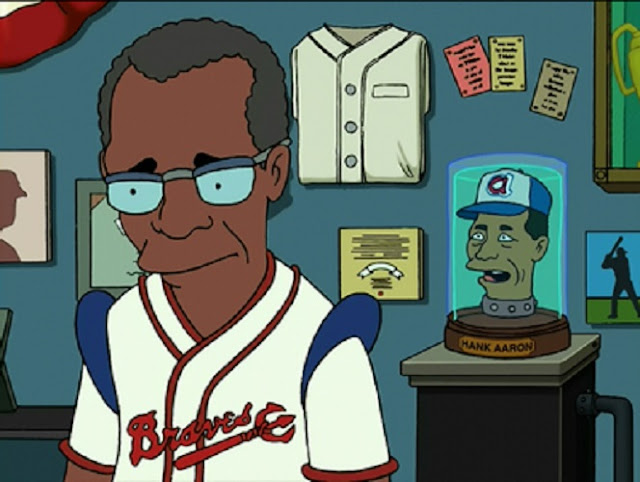 Futurama
- A Leela of Her Own (2002)
O’Bservation – Hank Aaron provided the voices of both Hank Aaron’s head and Hank Aaron XXIV.

At one point, Hank Aaron’s head derisively calls Hank Aaron XXIV "you Fungo." Despite its use as a generic sci-fi insult in this instance, in baseball, "fungo" is the term for a fly ball hit to players for fielding practice.

[Most of those notes came from the IMDb....]

As with many pro baseball players, Aaron appeared in plenty of TV blipverts: 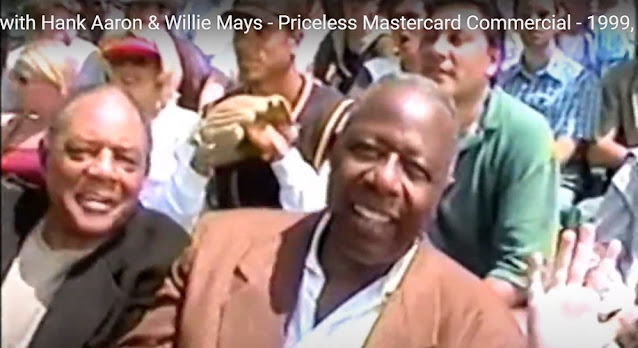 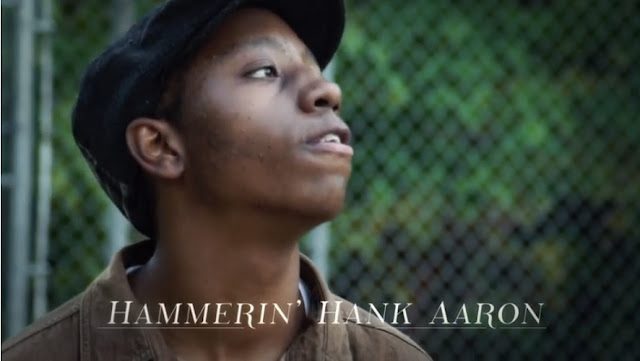 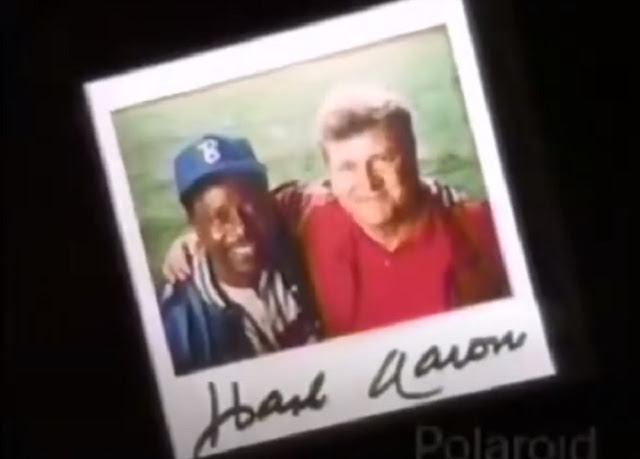 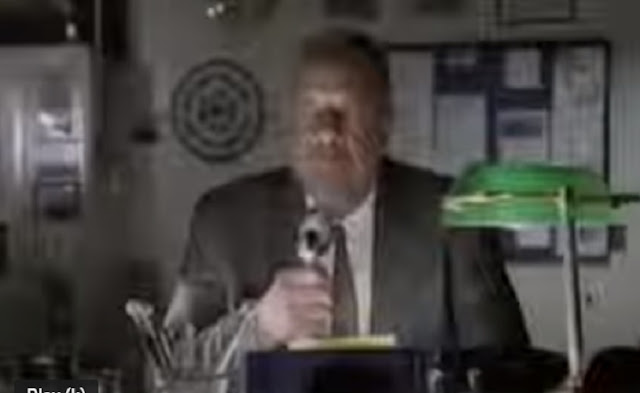 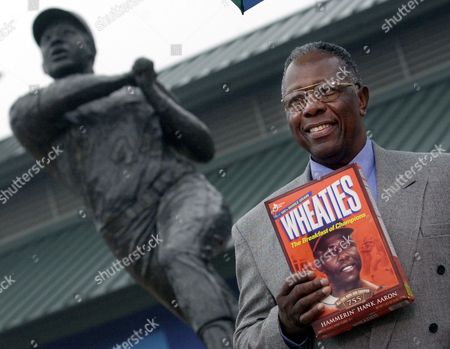 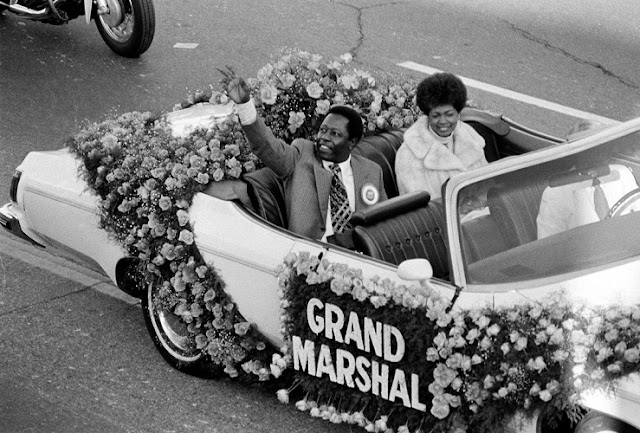 Plus he was the Grand Marshal of the Tournament of Roses parade on January 1, 1975, which is always televised. 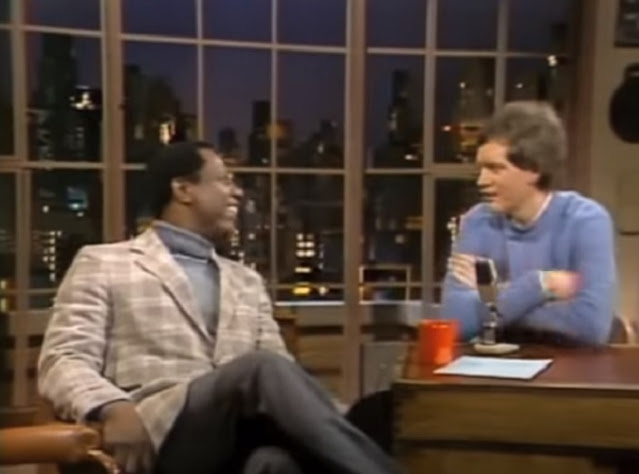 I've also included pics from his appearances with David Letterman - twice (out of three) on 'Late Night' and once on 'The Late Show' - because these were more than typical talk show spots; Letterman often turned the format on its head.  In this case, he had Aaron interviewed again, backstage after his first visit; he had Aaron come out to read the monologue jokes for him off the cue cards; and onc ehe moved over to CBS, they compared their baseball cards. 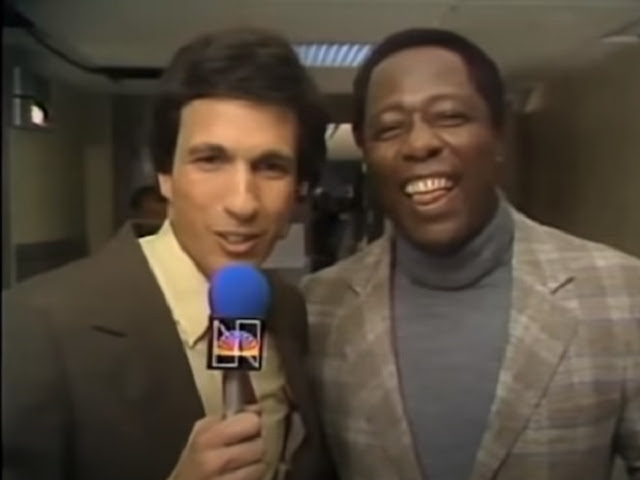 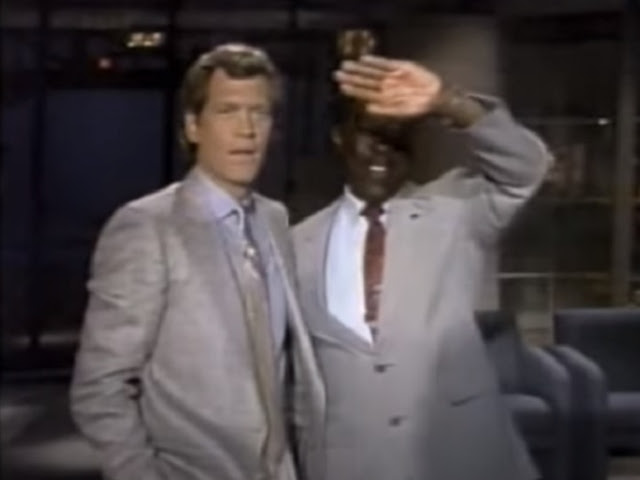 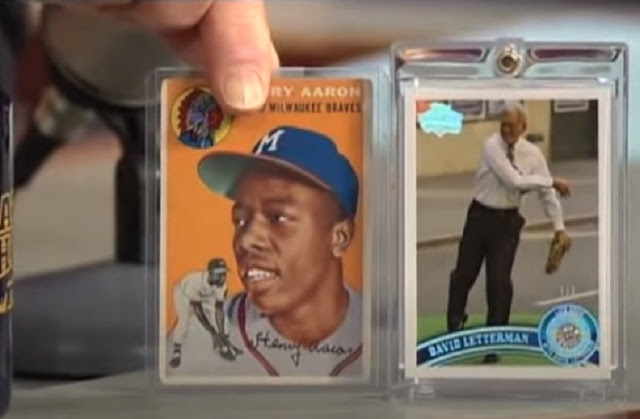 Welcome to the Hall! 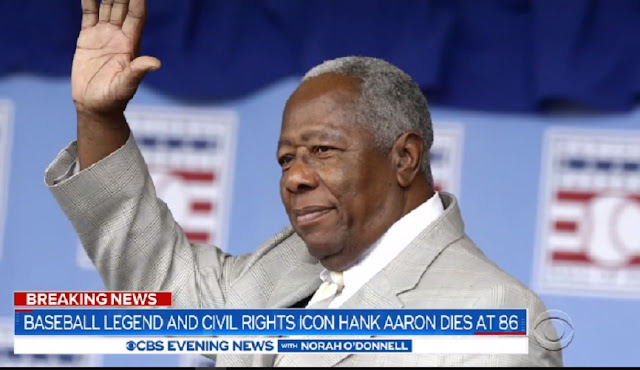