Let's start this Superhero Saturday post off with "Conversation Pieces"......

Harry Crane:
Draper?
Who knows anything about that guy?
No one's ever lifted that rock.He could be Batman for all we know.
'Mad Men'

Commissioner Gordon:
I don't know who he is behind that mask of his,
but I do know when we need him...
and we need him now!
'Batman'

The date for this particular episode on the Toobworld timeline was April 11, 1960.  This was determined by a 'Mad Men' Timeline fan-site due to the debut of the VW "Lemon" ad in Life Magazine. 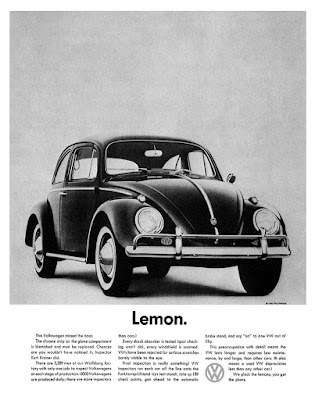 For anyone else watching 'Mad Men', Harry's reference to Batman would have to be to the superhero in the comic books, since the TV series would not debut for another six years.

But as my loyal Team Toobworld must have realized by now, Toby's brain don't play dat.

When it comes to Earth Prime-Time, the Caped Crusader and his sidekick Robin the Boy Wonder were already established in Gotham City by the time that first episode, "Hi Diddle Riddle", premiered on ABC.  This can be inferred by the conversation Commissioner Gordon had with Batman: 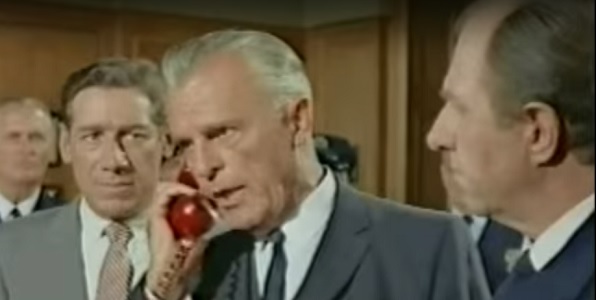 To have such a rapport with a costumed vigilante, of whom you have no clue as to their true identity (see the Commissioner's quote at the top), that you have no problem establishing a line of communication with a private phone line....  Well, it's O'Bvious to me that Batman has been working with the Gotham City Police Department for years, perhaps even for over a decade.  (And that would open the possibility that the Superman and Batman of the main Toobworld could have worked together as well back in the 1950s... but most likely without the Boy Wonder.) 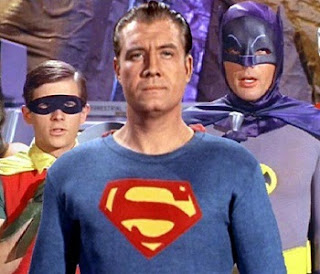 So when Harry Crane mentions the possibility that Don Draper could be Batman - even though Draper lives in Manhattan and that other "DD", the Dynamic Duo are centered in Gotham City - that means Batman has been fighting crime long enough to have established his presence on a national level, thanks to news media coverage.

After all, battling just the Riddler alone for over a dozen times must have taken some time, let alone all the other costumed criminals he collared.

Commissioner Gordon:
The Riddler.
That infernal prince of puzzlers who's outwitted us a dozen times. 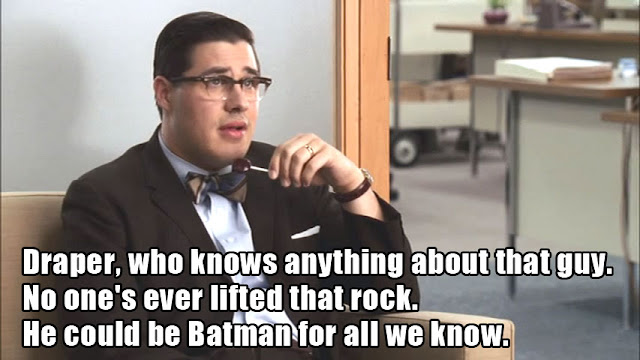 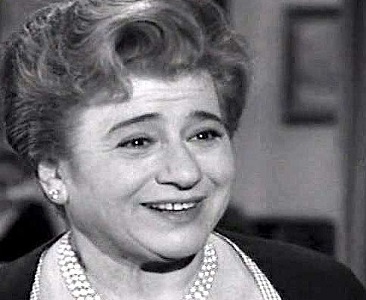 While doing a little research for my Hat Squad tribute to Ann Morgan Guilbert, I found this dialogue exchange from her appearance on 'Newhart' in the episode "Georgie and Bess":

Aunt Bess:
Those days, you couldn't tear Georgie away from the radio.
As I recall, your favorite was 'The Goldbergs'.
George Utley:
That's 'cause I had a crush on Gertrude Berg....
Until my Dad showed me a picture of her.

Luckily there aren't many Zonks in connection to 'The Goldbergs'.  If anything, any future references will probably be traced back to the current ABC sitcom which debuted in 2013.  But thanks to this piece of dialogue, we can claim any reference to the previous incarnation of 'The Goldbergs' is to the radio show. 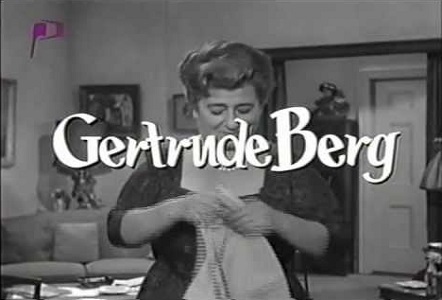 According to Wikipedia, the radio show ran from 1929 to 1946.  And as is the case with many of the TV show Zonks we have to disable, 'The Goldbergs' was based on "real-life" people, in this instance, a family from the Bronx.

There are only two Zonks that I can find which make reference to 'The Goldbergs'.  The first one occurred during the 12th season premiere of 'The Ed Sullivan Show' - Joe E. Lewis joked that the food served on the show wasn't kosher.

There is no problem in considering this to be a call-back to the radio show which ended a dozen years earlier.  Lewis would have known that the majority of his audience would have remembered it.

That same argument can be made with the second Zonk.....

'MAD MEN'
"THE MARRIAGE OF FIGARO"

Pete Campbell:
What was that in there?
Harry Crane:

Pete's description of client Rachel Menken as 'Molly Goldberg' had nothing to do with the way Miss Menken looked.  (For alls I know, Pete - like George Utley before him - might not have even known what Gertrude Berg looked like.  No, that nickname was all about her being Jewish.)

Again, there's no reason for this reference to be anything but calling back to the radio show, even though it ended fourteen years earlier.  ("The Marriage Of Figaro" took place in April of 1960.)  Pete Campbell was born in 1932 (based on the age of the actor Vincent Kartheiser at the time of filming.) and so would have been old enough to remember listening to the show with his family.

Someday, Molly Goldberg and the entire Goldberg Family will make it into the Television Crossover Hall of Fame.  Soon enough I will have run out of Christmas-themed inductees into the Hall for the month of December, and so I think I would then dedicate the month to the theme of Multiversals & Multidimensionals.

Molly Goldberg's family began as a radio show, was adapted into a TV series, from which a movie was made.  Just before the debut of the TV show, a stage play was developed from the material and in 1973 there was a musical called "Molly" which was based on the family.

As for their televersions, 'The Goldbergs' don't just exist in Earth Prime-Time.  They could also be found in the sketch comedy dimension of Skitlandia:

Episode #6.20 (1954)
Berg and McQuade portray their characters from the series.

According to Wikipedia:
In 1957, Gertrude Berg made her last two appearances as Molly Goldberg: first on an episode of the NBC-TV variety series 'Washington Square' with Ray Bolger, and then on a Kate Smith special that aired on ABC-TV. 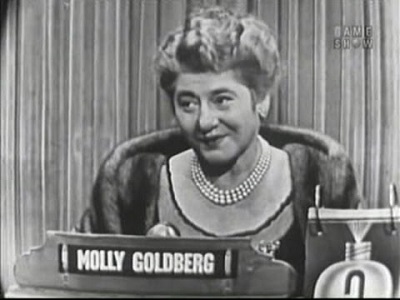 It can't be claimed that she appeared on the 1954 Mother's Day edition of the game show 'What's My Line?' as the "Mystery Challenger", even though her placard identified her as such.  She signed in as Gertrude Berg and they talked about the TV show as just that, not as contemporaries in the main Toobworld. 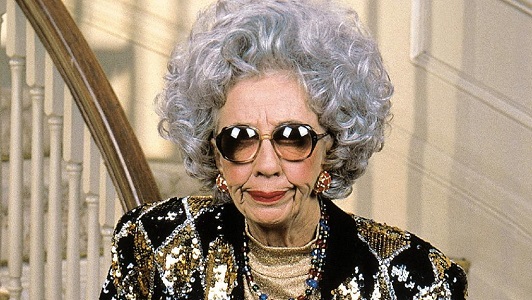 She told me that you were going to come home from work, and kiss a perky brunette at the door, and take a terrible fall over the ottoman.

YETTA ROSENBERG:
I'm telling you, it was in this very house!

[Yetta looks in the mirror.]

I don't consider this a Zonk.  'The Dick Van Dyke Show' existed in the main Toobworld as a TV sitcom, even though Rob Petrie and his family & friends also existed in Earth Prime-Time.  That's because the show was based on the book by Rob Petrie.  It was then bought by Alan Brady to be a vehicle for himself when his variety show ended.  And that's what we see with the pilot "Head Of The Family".  However, just as it was in real life with Carl Reiner, it was agreed that Brady was not right for the role of Rob Petrie.  So the life story of Rob Petrie was recast with all of the same people we know from the real world who appeared in the actual 'Dick Van Dyke Show'. 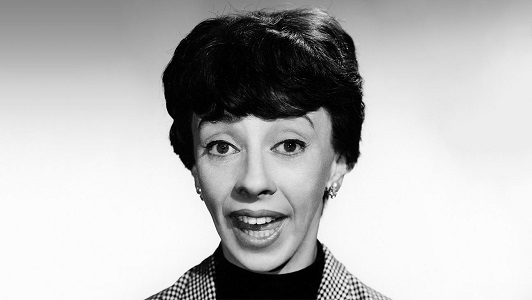 And therefore, Yetta Rosenberg had seen the sitcom and incorporated it into her delusions.  As it happens, she did bear an incredible resemblance to not only to Millie Helper, but also to Ann Morgan Guilbert, who played Millie.

There is a Chicago psychologist named Dr. Bob Hartley who once had a very long dream which had been fueled by Japanese food.  In his nightmare scenario, Dr. Hartley was known as a Vermont innkeeper and author named "Dick Loudon".  It's most likely that Bob incorporated Ann Morgan Guilbert as Millie from the sitcom into the scenario as "Aunt Bess", the former mistress of George Utley's father back during WWII.  ("That's short for World War II." - George Utley)  I don't think that Dr. Hartley knew Millie Helper or Yetta Rosenberg, as they both lived in or near New York City while he was in Chicago. 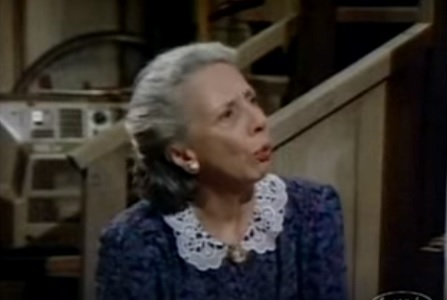 The missing links between those first three episodes are all thanks to Ann Morgan Guilbert, who played Yetta Rosenberg, Aunt Bess, and Millie Helper respectively.

Sadly, Ms. Guilbert passed away this week.  This is my small tip of the hat to what she contributed to Toobworld as these characters and as herself.

In memory of Ann Morgan Guilbert, here is her full appearance as a character who never actually existed in the TV Universe, not in Earth Prime-Time, nor any of the many alternate Toobworlds. 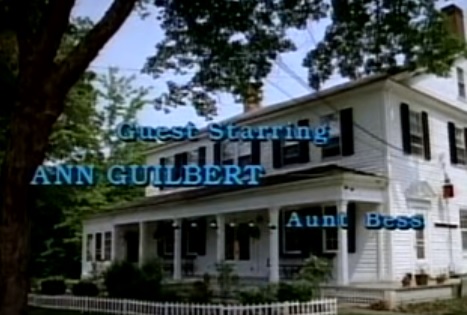 "Aunt Bess" was a figment of Dr. Bob Hartley's imagination.  During a night in which he suffered through what must have felt like an endless nightmare, Dr. Bob dreamt that he was a Vermont innkeeper named Dick Loudon.  Several people from his waking life were incorporated into this dream.  Chief among them was Cliff Murdock, Bob's old college buddy best known as "The Peeper."  (He appeared in the dream as the inn's handyman, George Utley.)

Some of the people who populated Bob's dream were actually lifted from TV shows he had watched, perhaps even that night before he went to bed.  (In fact, the format of the dream may have been inspired by the TV show which was adapted from the life of lawyer turned farmer Oliver Wendell Douglas.)

Such a character could have been "Aunt" Bess.  We know 'The Dick Van Dyke Show' (officially known as 'Head Of The Family') was adapted from the autobiographical novel by Rob Petrie as a future sitcom vehicle for Alan Brady.  However, even he admitted that ultimately he wasn't right for the part.  So a young Broadway star named Dick Van Dyke (whose fictional televersion is acknowledged to exist in 'Supernatural', 'Community', 'Pushing Daisies', and 'Designing Women') was hired for the lead role instead. 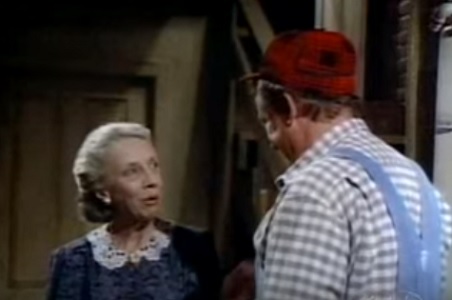 Among the other actors in that dream was Ann Morgan Guilbert, who played Millie Helper, the Petries' next-door neighbor.  I believe she was the inspiration for "Aunt" Bess - Not Millie, but Ms. Guilbert playing Millie.  Just because there was a TV show about the life of Rob Petrie, that doesn't mean there couldn't be a TV show about him.  You have to admit the premise of a family man who worked as the head writer for a TV show would have made for a great behind-the-scenes series on Toobworld TV.  (This may be what separates the 'Dick Van Dyke Show' of the real world from that of Toobworld: ours was a sitcom; the one watched by TV characters could have been a very funny real life documentary show.

I'll have more about Ann Morgan Guilbert and her place in Toobworld tomorrow.