"THE MISSILES OF OCTOBER" U THANT 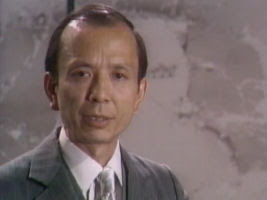 "THE MISSILES OF OCTOBER": KRUSCHEV 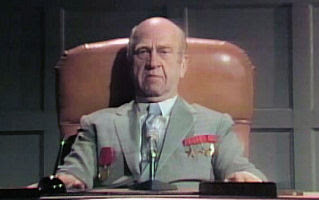 AS PLAYED BY:
Howard Da Silva 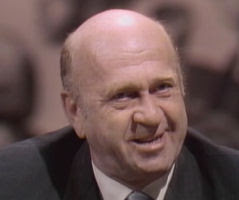 For some reason, he reminds me of Glenn Beck when he smiles like that.....
Posted by Toby O'B at 1:44 AM 0 comments 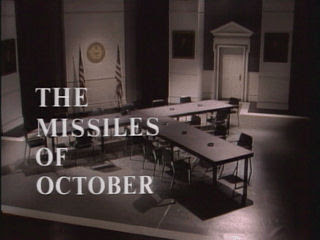 From Wikipedia:
The Cuban Missile Crisis was a confrontation between the United States, the Soviet Union, and Cuba in October 1962, during the Cold War. In Russia, former Eastern Bloc, and communist countries (i.e. China and North Korea), it is termed the "Caribbean Crisis", while in Cuba it is called the "October Crisis".

In September 1962, the Cuban and Soviet governments placed nuclear missiles in Cuba. When United States intelligence discovered the weapons, the U.S. government sought to do all it could to ensure the removal of the missiles. The crisis ranks with the Berlin Blockade as one of the major confrontations of the Cold War, and is generally regarded as the moment in which the Cold War came closest to a nuclear war.

The tensions were at their height from October 8th, 1962, which was known as "Black Saturday". On October 14th, United States reconnaissance observed missile bases being built in Cuba. The crisis ended two weeks later on October 28th, 1962, when the President John F. Kennedy and the United Nations Secretary-General U Thant reached an agreement with the Soviets to dismantle the missiles in exchange for a no-invasion agreement.

In his negotiations with the Soviet Ambassador Anatoly Dobrynin, U.S. Attorney General Robert Kennedy informally proposed that the Jupiter missiles in Turkey would be removed "within a short time after this crisis was over". The last missiles were taken down by April 24th, 1963, and were flown out of Turkey soon after.

Starting today, Toobworld Central will commemmorate those historic "Thirteen Days" in American history with 13 of the participants in the unfolding drama, as seen on TV in "The Missiles Of October".

"The MIssiles Of October" had a dream cast for those who love character actors, as well as being major showcases for some of the younger talent of the day like William Devane, Martin Sheen, James Olsen, and Michael Lerner. In fact, there were so many characters in this one tele-play, that we have enough to run this theme for three years!

For this first year, we're focusing on the foreigners who were involved in the negotiations - and as you will see, that includes one American.... 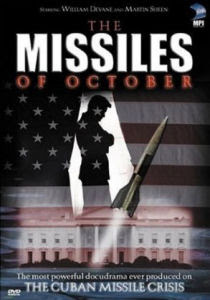 I hope you enjoy it!

AS SEEN ON TV: ANWAR SADAT 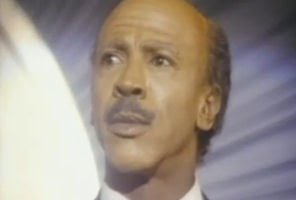 ANWAR AL-SADAT
AS SEEN IN:
"Sadat"

AS PLAYED BY:
Lou Gossett, Jr.

Muhammad Anwar Al Sadat, or Anwar El Sadat (25 December 1918 - 6 October 1981), was the third President of Egypt, serving from 15 October 1970 until his assassination on 6 October 1981. He was a senior member of the Free Officers group that overthrew the Muhammad Ali Dynasty in the Egyptian Revolution of 1952, and a close confidant of Gamal Abdel Nasser, whom he succeeded as President in 1970. 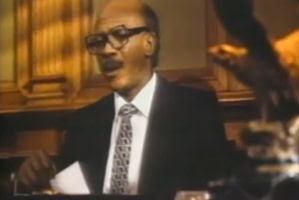 In his eleven years as president he changed Egypt's direction, departing from some of the economic and political principles of Nasserism by reinstituting the multi-party system and launching the Infitah. His leadership in the October War of 1973 and the regaining of Sinai made him an Egyptian hero. His visit to Israel and the eventual Israel-Egypt Peace Treaty won him the Peace Abbey Courage of Conscience award posthumously,but was an act enormously unpopular with the Arab world and Islamists, and resulted in Egypt being expelled from the Arab League.
[from Wikipedia] 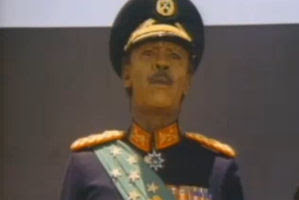 AS SEEN ON TV: GALINA BREZHNEVA 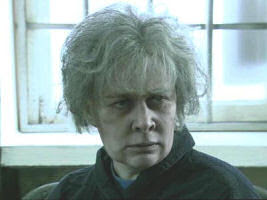 GALINA BREZHNEVA
AS SEEN IN:
"Galina"

AS PLAYED BY:
Lyudmila Nilskaya

Galina Leonidovna Brezhneva (1929 – 30 June 1998) was the daughter of the Soviet leader Leonid Brezhnev.Brezhneva married four times and was regarded as a wild-child by the Soviet authorities. In 1982, she was tried and acquitted of stealing jewels from an animal trainer. Her third husband was convicted of bribery and corruption and sentenced to twelve years in a labour camp. Gradually she became an alcoholic and her own daughter placed her in a psychiatric hospital where she died in 1998.
[from Wikipedia] 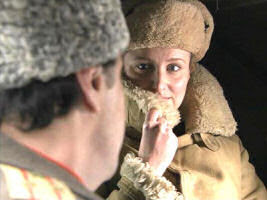 Galina Brezhneva will be the last woman to appear in the "As Seen On TV" gallery for the next two weeks. "The Missiles Of October" was heavy with testosterone.....

AS SEEN ON TV: MENACHEM BEGIN 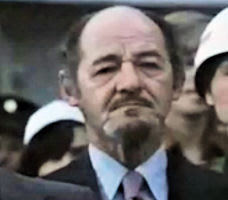 AS SEEN IN:
"The Raid on Entebbe"

AS PLAYED BY:
David Opatashu

Menachem Begin (16 August 1913 – 9 March 1992) became the sixth prime minister of the State of Israel. Before the independence, he was the leader of the Irgun, a revisionist breakaway from the larger mainstream Jewish paramilitary organization Haganah. He proclaimed a revolt, on February 1, 1944, against the British mandatory government, which was opposed by the Jewish Agency. He played a significant role in Jewish resistance against the British control in the waning years of the mandate, leading the more militant Zionists. 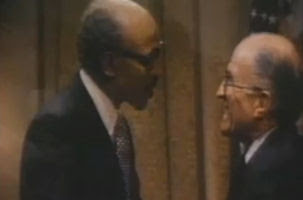 MENACHEM BEGIN
[with ANWAR SADAT]
AS SEEN IN:
"Sadat"

AS PLAYED BY:
Barry Morse
[Lou Gossett, Jr. as Sadat]

Begin’s most significant achievement as prime minister was signing a peace treaty with Egypt in 1979, for which he and Anwar Sadat shared the Nobel Prize for Peace. In the wake of the Camp David Accords, the Israel Defense Forces withdrew from the Sinai Peninsula and returned the Egyptian territories captured in the Six-Day War.
[from Wikipedia]

Labels: As Seen On TV, Recastaways, TV Movies, Twipped from the Headlines, Wikipediaphile

AS SEEN ON TV: FATHER DAMIEN

VATICAN CITY (AP) — Pope Benedict XVI canonized five new saints Sunday, including a 19th-century priest whose work with leprosy patients on a Hawaiian island has been hailed by U.S. President Barack Obama as inspiring those helping AIDS sufferers in today's world. [Belgium-born Jozef De Veuster, more commonly known as Father Damien, who himself died from leprosy in 1889 after contracting the disease while working with leprosy patients who were living in isolation on Molokai island.]

The pontiff said the newly canonized had given of themselves totally without "calculation or personal gain."

"Their perfection, in the logic of a faith that is humanly incomprehensible at times, consists in no longer placing themselves at the center, but choosing to go against the flow and live according to the Gospel," Benedict said in his homily. 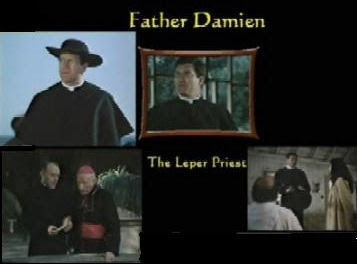 FATHER DAMIEN
AS SEEN IN:
"Father Damien: The Leper Priest"

AS PLAYED BY:
Ken Howard

For a long time, I've been hunting online for a good picture of Ken Howard in the role of Father Damien, but this was the only one I found. I was holding off until I could find a better one, but with this news, I thought it was time to celebrate his presence in the TV Universe....

AS SEEN ON TV: YITZHAK RABIN 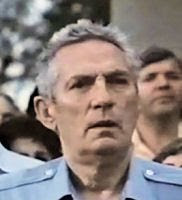 YITZHAK RABIN
AS SEEN IN:
"The Raid On Entebbe"

AS PLAYED BY:
Peter Finch

Yitzhak Rabin (1 March 1922 – 4 November 1995) was an Israeli politician and general. He was the fifth Prime Minister of Israel, serving two terms in office, 1974–1977 and 1992 until his assassination in 1995. In 1994, Rabin won the Nobel Peace Prize together with Shimon Peres and Yasser Arafat. He was assassinated by right-wing Israeli radical Yigal Amir, who was opposed to Rabin's signing of the Oslo Accords. Rabin was the first native-born prime minister of Israel, the only prime minister to be assassinated and the second to die in office after Levi Eshkol.

Operation Entebbe was perhaps the most dramatic event during Rabin's first term of office. On his orders, the IDF performed a long-range undercover raid to rescue passengers of an airliner hijacked by militants belonging to the Popular Front for the Liberation of Palestine's Wadie Haddad faction and the German Revolutionary Cells (RZ), and had been brought to Idi Amin's Uganda. The operation was generally considered a tremendous success, and its spectacular character has made it the subject of much continued comment and study.
[from Wikipedia]