I knew that eventually I would be doing some memorial inductions into the Television Crossover Hall Of Fame for this year.  Just based on last year alone, I knew there would always be a few as Time marched on.  But I never expected it to happen so quickly and so early in the year.  And God help me, I had no clue it would be for David Bowie. 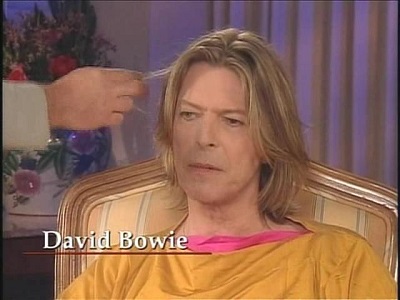 Bowie was the true chameleon as an entertainer, dominating the music scene from the late 1960s onward with a parade of characters - the Thin White Duke, Aladdin Sane, Ziggy Stardust....  (And the chameleon was married to Iman, who played a Chamelard in one of the "Star Trek" movies.....)

In the movies he flowed gracefully from one genre to another - sci-fi, fantasy, a war movie, a biblical epic, comedies, a couple of biographical roles, and even a pirate movie.

In Toobworld, he had a few characters to inhabit the TV Universe, my favorite being Sir Roland Morecock - the movie director seen in an episode of 'Dream On'. You can tell the scriptwriter for "The Second Greatest Story Ever Told" had a lot fun writing his lines:

"This is not a tornado! I've felt more wind from my grandmother's ass."

"I don't generally fraternize with the help but as I have no friends of my own I am going to invite you all to my little shack in the country this weekend.  It will give me the opportunity to see how pale and flabby your bodies are in swimming attire."

"It's alright, Roselle. He's nobody."

And my personal favorite.....

But for the TVXOHOF, we honor him for being himself.


"He has gloriously vindicated the right of the Individual to be individual."


The President
'The Prisoner'

And what an individual he was!

To qualify for membership in the TVXOHOF, one needs three different shows which could be linked together by their presence.  As a member of the League of Themselves, David Bowie accomplished that easily with the following three appearances:

'Full Stretch'
- "Ivory Tower" (1993)
Baz Levick is "an ex-footballer who is now the proprietor of the Ivory Towers Limousine Car Service. The fast-talking Baz has to use all his ingenuity and charm to fend off competitors and keep his business on the road, while his team of hard-working drivers find themselves chauffeuring everyone from rock stars to insufferable aristocrats.  Bowie was a regular client who was slightly perturbed when his new driver, Tarquin, effused about his career..... 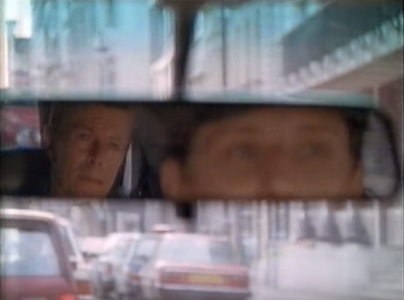 Tarquin: I really liked "Tin Machine". And the early stuff - well, it's brilliant!
The first album of yours I ever heard was "A Lad Insane".
Of course, it was me Dad's. I was only nine at the time.David Bowie: Thanks for sharing that, Tarquin.

'Nathan Barley'
- "Pilot" (2005)
Bowie is listed (albeit uncredited) as being in the pilot episode, but as was the case with Kylie Minogue and Jamie Oliver, they were the subjects of photographs at an art gallery which depicted them in various displays of urination.  For Bowie, he was seen peeing into a toaster..... 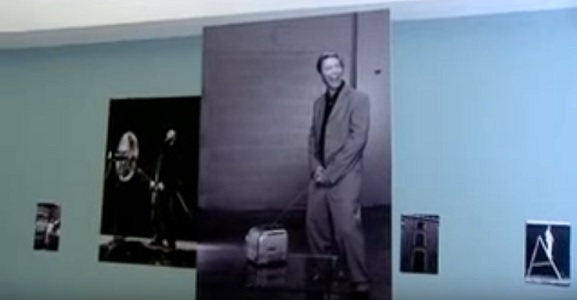 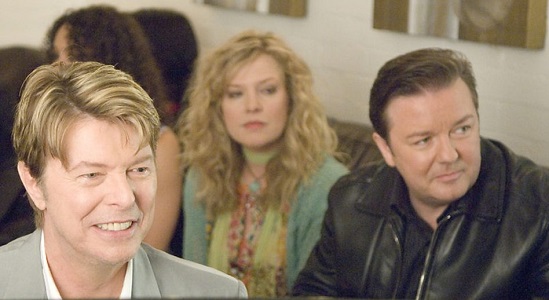 The first episode of Andy's sitcom, "When the Whistle Blows" is getting harsh reviews but draws respectable viewing numbers. Andy begins to get recognized on the street and in pubs.

And that's all that he needed.  But he crossed over into another TV dimension as well, that of Doofus Toobworld: 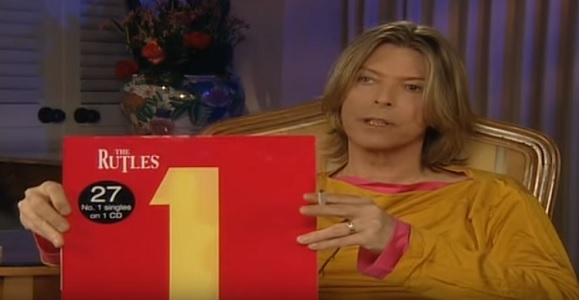 (It could be argued that the Rutles exist in the main Toobworld as well.  Personally, I don't see any reason why they can't be in both.)

I would also argue that his appearance in Bing Crosby's last Christmas special could co-exist in the main Toobworld as well as in Skitlandia. 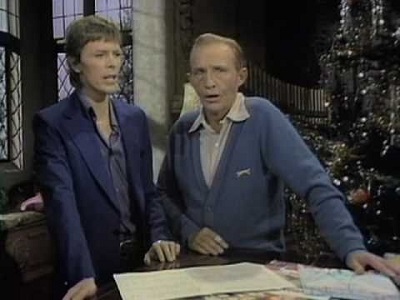 As with his "appearance" in 'Nathan Barley', Bowie's existence in Toobworld could be verified by references in other TV shows even if he didn't really appear himself.  One of the best examples of this would be in 'Life On Mars'.  The very title of the show is thanks to him!

In the pilot episode, Manchester detective Sam Tyler was struck down by a hit-and-run driver as he stood beside his car.  The CD in his car was playing that song at the time.  When he came to, Sam found himself in 1973 and the car he had now had an 8-track player in the dashboard.  But it was still "Life On Mars" that was playing.

The strangest reference to Bowie came last year in an early episode of 'American Horror Story: Freakshow'.  The show took place in the late 1950s but there was Elsa Mars singing "Life On Mars" on stage at her freak show.

How was this possible?  I'm going to put it out there that the Doctor was somehow involved.  (Don't you think that of all the celebrities of the last half of the 20th Century and into the first decades of the new millennium, it would be David Bowie who might be invited to travel for a time in the TARDIS?) 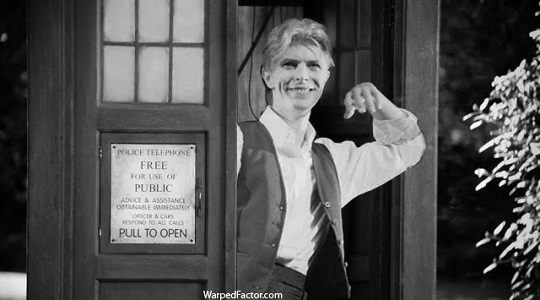 And there's one last reason, a bit o' reali-TV, for which Mr. Bowie deserves recogntion - one of socio-political significance that led to a major change to the cultural landscape of television.....