In the past, I've written several times about the villains from the DC Superman comics who should have shown up in 'The Adventures of Superman' and then suggested the actors of that time who could have played the roles.  And I also had a suggestion for Supergirl as well:

But I didn't give much thought to other characters who could have shown up in the course of the series..... 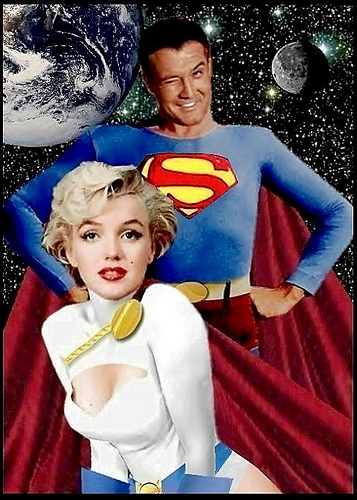 This picture, of course, is just pure fantasy though.  The comic book Power Girl was not created until 1976, almost two decades past the show's run.  ('The Adventures Of Superman' ran until 1958.)

Supergirl was around, but as I've pointed out above, I already have a candidate for that role.

If Power Girl had been around, and we wanted the fantasy to be played out with Marilyn Monroe, she would probably have been available for a one-shot guest appearance only during the first two seasons.  I think it was with "Niagara" in 1953 that her career in the movies really blossomed, although she had quite a few small showcase roles in movies like "All About Eve" and "The Asphalt Jungle".  Once her film work took off, it would have been impossible to get her for the role.

However, Joi Lansing - who played Sgt. O'Hara in one episode (and who gave birth to Superman's child in the Secret Back-story of Toobworld) - could have returned as Power Girl... if the character had existed back then, of course.


For the month of July as we celebrate the League of Theselves in 2016, I thought a sports figure - specifically a baseball player since it is the time when the Boys of Summer hold sway - would be the perfect choice for the showcase.  And as hard as it is for a Red Sox fan to admit, the greatest candidate for a baseball player who played himself in Earth Prime-Time was a New York Yankee.

That's right, we're giving a shout out to: 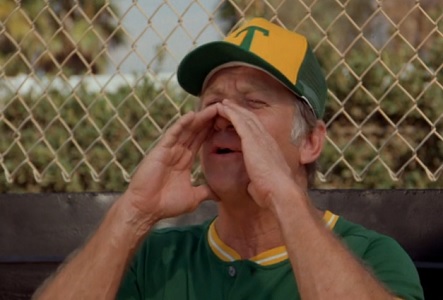 Mickey Charles Mantle (October 20, 1931 – August 13, 1995), nicknamed "The Commerce Comet" or "The Mick", was an American professional baseball player. Mantle played in Major League Baseball (MLB) for the New York Yankees as a center fielder and first baseman, from 1951 through 1968. Mantle was one of the best players and sluggers, and is regarded by many as the greatest switch hitter in baseball history. Mantle was inducted into the National Baseball Hall of Fame in 1974 and was elected to the Major League Baseball All-Century Team in 1999.

Mantle was arguably the greatest offensive threat of any center fielder in baseball history. He has the highest career OPS+ of any center fielder and he had the highest stolen base percentage in history at the time of his retirement. In addition, compared to the four other center fielders on the all-century team, he had the lowest career rate of grounding into double plays (by far) and he had the highest World Series on-base percentage and World Series slugging percentage. He also had an excellent 0.984 fielding percentage when playing center field. Mantle was noted for his ability to hit for both average and power, especially tape measure home runs. He hit 536 MLB career home runs, batted .300 or more ten times, and is the career leader (tied with Jim Thome) in walk-off home runs, with a combined thirteen, twelve in the regular season and one in the postseason.

Mantle won the Triple Crown in 1956, leading the major leagues in batting average, home runs, and runs batted in (RBI). He was an All-Star for 16 seasons, playing in 16 of the 20 All-Star Games that were played. He was an American League (AL) Most Valuable Player (MVP) three times and a Gold Glove winner once. Mantle appeared in 12 World Series including 7 championships, and holds World Series records for the most home runs (18), RBIs (40), extra-base hits (26), runs (42), walks (43), and total bases(123).

In 1993 and 1996, Mantle is referenced multiple times in the sitcom 'Seinfeld', specifically the episodes "The Visa" (1993), where Kramer punches him while at a baseball fantasy camp, and "The Seven" (1996), where George Costanza wants to name his future baby 'Seven' based on Mickey Mantle's uniform number. 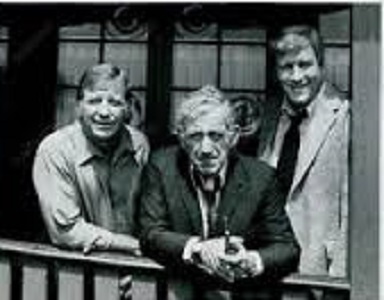 'The White Shadow'
- "Reunion: Part 2" (1980)
The central theme of "Reunion" is the empty relationship between Coach Reeves and his father.  Apparently, Jake Reeves had an unemotional relationship with his father as well.  Unbeknownst to Reeves, his father has an inoperable brain tumor.  He refuses hospital care.  At the end of Part 1, he reveals the illness.  In a late-night conversation, barriers are broken and the corner is turned towards a more honest, productive, and fulfilling relationship.

The Reeves men paint New York City red the following night, clearing the air and allowing Coach Reeves to depart for Los Angeles with a clear conscience and a full heart.  During their male bonding night, they meet Mickey Mantle, who recognizes Ken Reeves as a former NBA player.

'Mr. Belvedere'
- "The Field" (1989)
It's George's birthday. He's been pushing Wesley to excel at baseball and when Wesley decides to cheat, George is upset at him and Wesley say she did it for him. When they throw him a party, and help George relive some of life's greatest moments but only shows him at how he has done nothing he set out to do, like play baseball with some greats. So Belvedere decides to give George a different present. The next day at Wesley's game, he arranged for some great players like Hank Aaron, Willy Mays, Reggie Jackson, Johnny Bench, and Ernie Banks to be there. and along with George and Robert Goulet play Wesley's team. 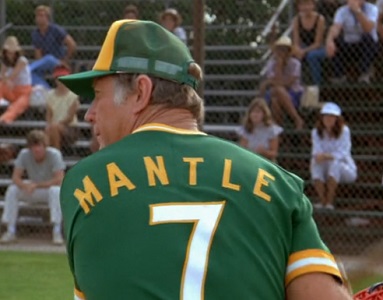 'Remington Steele'
- "Second Base Steele" (1984)
A high school baseball team alumnus hires The Remington Steele Agency to find out who is responsible for a series accidents at a sports camp his old team is attending.

'The Jackie Gleason Show'
- "Lucky Number"
While at a ballgame with Ed, Ralph wins a $1000 as part of a contest at the ball park.  Later when the bread company representative arrives to give him the prize they tell him they want pictures for advertising. Alice points out Ralph called in sick and will lose his job if the pictures are used.

"The Seven"
George meets Susan's cousin and her husband. She will soon have a baby but they have yet to choose a name. George tells them he knows exactly what his first child will be called : Seven, in honor of Yankees great Mickey Mantle. Susan hates the name but her cousin thinks it's great and decides to use it. George goes over the top in trying to convince them otherwise.

'Make Room For Daddy'
"Homecoming"
Charley had invited some of the Yankees of the day to the Copa which is where Rusty got his picture taken with Roger Maris and Mickey Mantle.

Welcome to yet another Hall of Fame, Mr. Mantle! 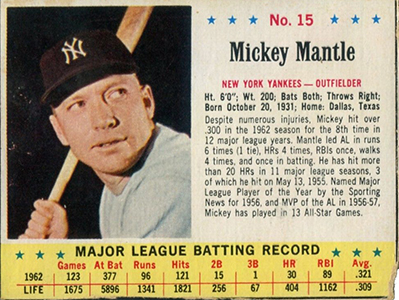 
I'm a little late to the party but as long as there are a few hours left in the day......

I'd like to wish actress Nancy Dussault, perhaps best known in Toobworld as Muriel Rush (the wife of Ted Knight's character in 'Too Close For Comfort'), a very happy 80th birthday.

Her televersion was acknowledged in an episode of 'Car 54, Where Are You?' ("142 Tickets On The Aisle") when she was on Broadway playing Maria Von Trapp in "The Sound Of Music": 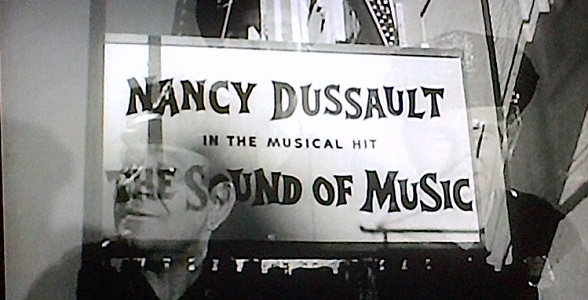 She appeared as herself as a co-host of 'Good Morning, America', but this theatre marquee carries more weight in considering her televersion.

She was also a regular on 'The New Dick Van Dyke Show' as Carol Davis and has appeared in 'Murder, She Wrote', 'Matlock', 'Barney Miller', 'Dream On' and 'The Love Boat'.  Her last role was in 'Alias' back in 2001.

All the best from this old Toobmaester, Ms. Dussault.  May you have many more birthdays to come....

Labels: As Seen On TV, League of Themselves, O'Bservations, Outside the Box, TV timeline

"I'm overweight; I drink too much; I smoke too much; I eat too much.
I'm divorced, and the kids don't want to know me.
I've a jaundiced view of human nature.
That's right.  I'm a copper."
Harry Vellacotte
'Midsomer Murders'

BORN TO RERUN - THE ACTOR'S LIFE FOR ME-TV 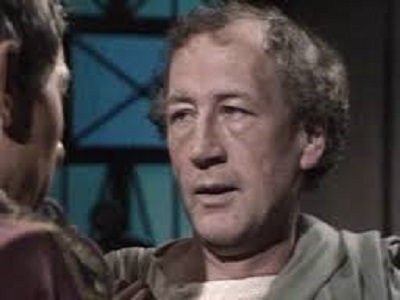 Aristarchus:
What a voice! Perhaps we should change places?
Only the Romans can afford ushers with a voice like that.
Did you have it trained?
Pallas:
I was an actor, sir.
Aristarchus:
That explains it. Resting, are you?
Pallas:
No, sir. I've given it up...
Everyone's an actor in Rome. There isn't enough work.
Aristarchus:
And what there is goes to friends...
It's the same everywhere.
Pallas:
The theatre isn't what it was.
Aristarchus:
No. And I'll tell you something else.
It never was what it was.
'I, Claudius' 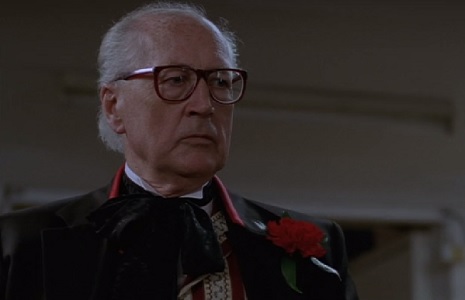 Harold Winstanley:
God, what am I doing here?
Casting pearls before uncultured swine.
I, who directed a number one tour of "Spider's Web".
With the original West End cast.
One critic said he'd never seen anything like it in the whole of his theatrical life.
How often Johnny G* would turn to me for advice.
"Harold, love," he would say,
"Dear boy, this speech of Prospero's...."
'Midsomer Murders'

Back on Mother's Day, I shared a "Born To Rerun" theory which connected the long-running British murder mystery to the classic 70s adaptation of Robert Graves' novel about the Caesars, using an actress who played both the murderer in one episode in that pastoral setting as well as one of the most powerful women in History.

And now here we have another fine example of reincarnation between the two series - the soul of a frustrated Greek actor manifesting as a theatre director of former glories driven mad by what he perceived as the betrayals of the world against him.

Although it's not always necessary, it helps my argument when both roles are played by the same actor.  In that previous example, Lady Annabel and Livia were portrayed by Sian Phillips.  And it was Bernard Hepton who took on the roles of Pallas and Winstanley.

* By the way, "Johnny G" is a reference to Sir John Gielgud, known as one of the triumvirate of greatest actors of the 20th Century in Great Britain.  (The other two being Sir Laurence Olivier and Sir Ralph Richardson.)  This confirms the Oscar winner (Best Supporting Actor for 'Arthur') as having a fictional televersion in the main Toobworld.  His animated televersion is also referenced in an episode of 'The Simpsons' (rather scandalously, I would say) and he does appear as himself in Skitlandia, along with Sir Ralph, thanks to an episode of 'SCTV'.


Here's a trippy take on how 'Seinfeld' might have handled the reaction to the SCOTUS ruling on gay marriage during Pride Week last year...... 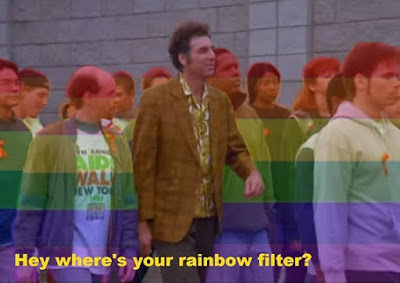 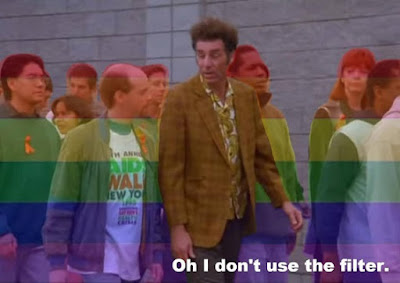 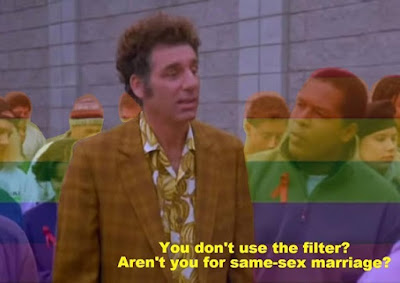 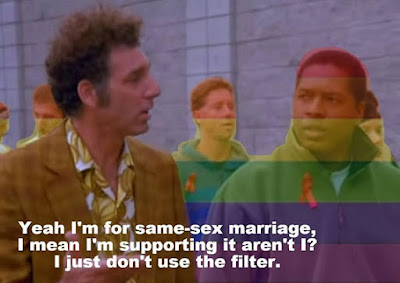 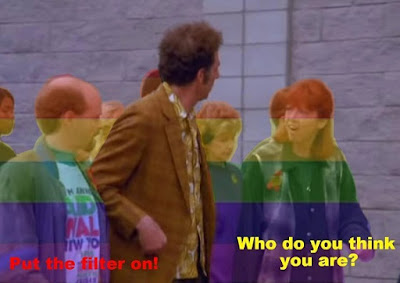