This month, the Television Crossover Hall of Fame continues its mini-theme for 2021 of inducting select members of the Addams Family… but only the incarnations from Earth Prime-Time, the main Toobworld and one of Morticia's Tooniverse appearances.

And per tradition, a new May Queen is crowned, so it only makes it O’Bvious that the May 2021 would be…. 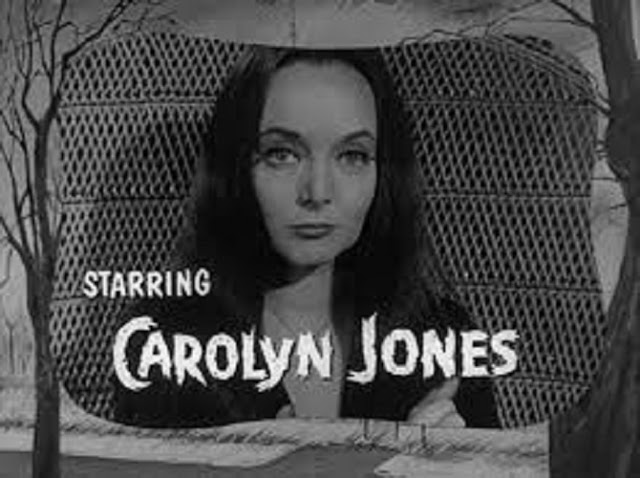 MORTICIA ADAMS
From Wikipedia:
Morticia Addams (née Frump) is a fictional character from ‘The Addams Family’ television and film series. The character was created by cartoonist Charles Addams in 1933. 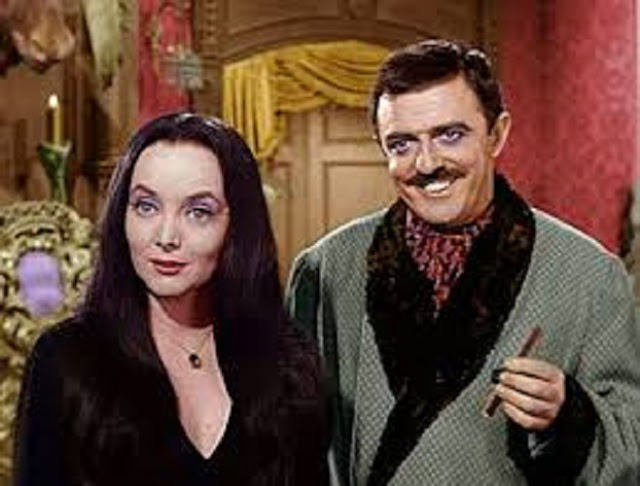 Morticia is the wife of Gomez Addams and mother of Wednesday and Pugsley Addams. The character originated in the Charles Addams cartoons for The New Yorker magazine in the 1930s. In the cartoons, none of the family members had names. When the characters were adapted to the 1964 television series, Charles Addams' selection of her name was inspired by "mortician". Morticia's maiden name is "Frump" and she has an older sister named Ophelia (also played by Carolyn Jones, in the original TV series). In the television series, her mother (Uncle Fester's sister) was named Hester Frump (played by Margaret Hamilton). Her mother-in-law is Grandmama Addams. 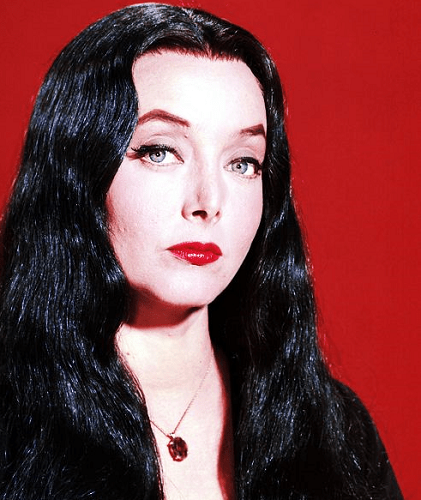 Morticia is described as a witch; she is slim, with extremely pale skin and long flowing straight black hair. In one episode she is seen wearing a black pointed hat. She commonly wears black hobble dresses to match her hair, tightly form fitting, with a fringe of octopus-like cloth "tentacles" at the lower hem. According to Wednesday, Morticia applies baking powder to her face instead of actual makeup. In each episode, she easily allures her husband Gomez by speaking French (or any other foreign language for that matter). 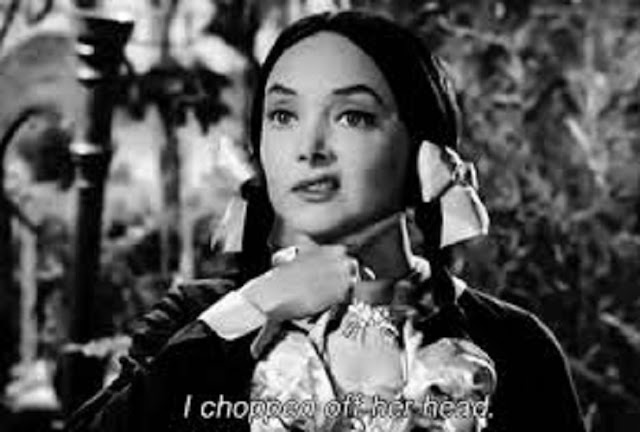 Morticia is musically inclined, and is often seen freely strumming a Japanese shamisen. She frequently enjoys cutting the buds off of roses, which she discards (keeping only the stems), likes cutting out paper dolls with three heads and making sweaters with three arms, collecting the mail from the hand-in-the-box Thing, and cooking unusual concoctions for her husband, including eye of newt. Her personal pet is Cleopatra, a fictitious breed of carnivorous plant called an African Strangler, to which she feeds hamburgers and other various meat. 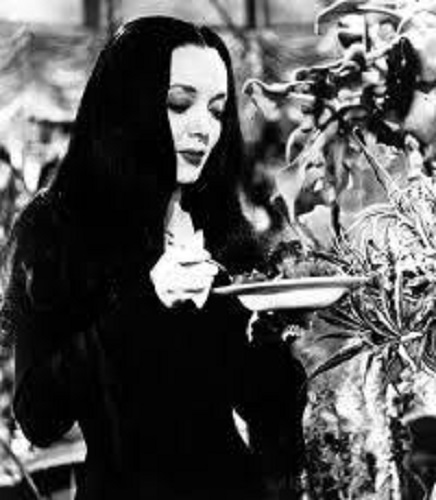 Morticia's family tree can be traced back to Salem, Massachusetts, and witchcraft is also implied at times in the television series. For example, Morticia likes to "smoke," an activity that does not involve cigarettes or cigars (such as her husband frequently enjoys), but smoke instead emanates from below her.

Morticia was portrayed by Carolyn Jones in the TV series.  Jones also voiced this character in an episode of ‘The New Scooby-Doo Movies’ that featured the family.

From ADDAMS FAMILY WIKI:
Morticia is the wife of Gomez Addams, and the mother of [Wednesday, Pugsley, Wednesday Jr., [and] Pugsley Jr. She is also the sister of the daisy-headed Ophelia Frump and daughter of Granny Frump and Grandpa Frump. 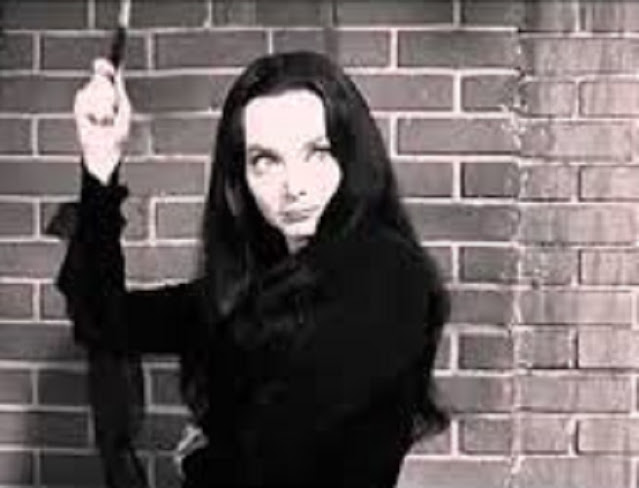 Morticia also has an affinity for making certain that her family upholds the traditional Addams way, and is usually the most taken aback when one of the clan goes astray and does something "pleasant."
From HEROES WIKI:
Her creator Charles Addams describes her as the real head of the family, being low-voiced, incisive and subtle, has stunning beauty, and has a fierce loyalty to her family. She has a garden full of deadly nightshade, henbane and dwarfs hair. 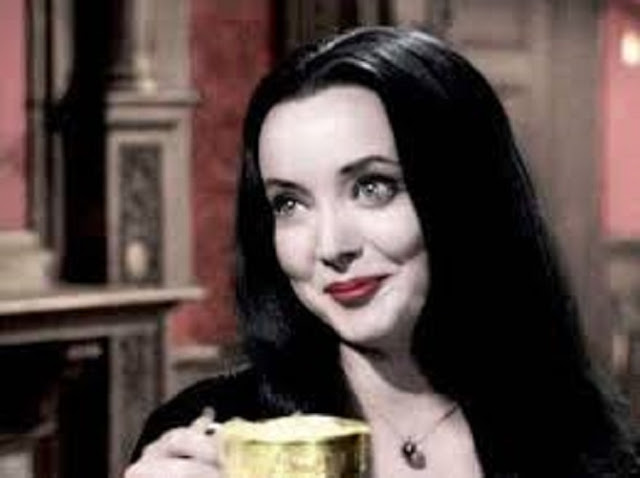 She also wants the her family to uphold the Addams Family traditions.
VOGUE:
Morticia Addams. Passionate wife, hostess, mother of two boys to whom she leaves everything to do… she has become a role-model to women all over the world, thanks to her confidence and glamorous allure. Morticia Addams makes the gothic style sexy and is revered as an object of absolute desire. In both film and television, she has been regarded by many actresses as having quite a legendary charm. 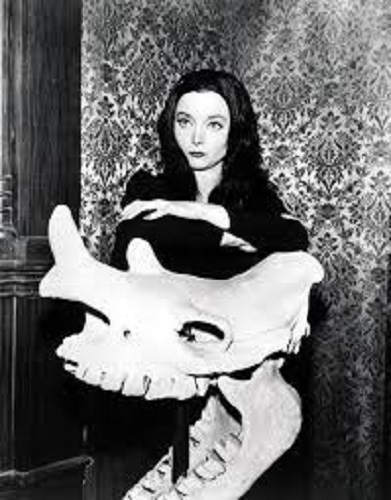 Carolyn Jones
On September 18, 1964, the ABC channel introduced the television version of ‘The Addams Family’. After winning over audiences in The New Yorker, Charles Addams and his family find new life in a series that depicts the daily life of a family like no other. To play Morticia Addams, the producers chose Carolyn Jones. Pale complexion, long black hair, doll face… Carolyn Jones represents the ideal image of a femme fatale, in every sense of the word. When taking on the role, she enjoyed a certain amount of freedom to play the character originally. Carolyn Jones plays the zesty and irresistible personality of a character that is still iconic today. The actress then reprises her role as Morticia in the TV movie “The Addams Family: It's Party Time” in 1977.

From SYFY WIRE:
Morticia Addams is a bad witch in the best way. She’s the brainchild of cartoonist Charles Addams, whose talent for creating ghoulish and darkly humorous characters led to the infamous Addams Family single-panel comics in The New Yorker during the late 1930s. Actress Carolyn Jones expertly brought the slim, pale, and black-clad family matriarch to life in 1964's ‘The Addams Family’ television show which detailed the aristocratic odd family’s constant culture differences with their neighbors. 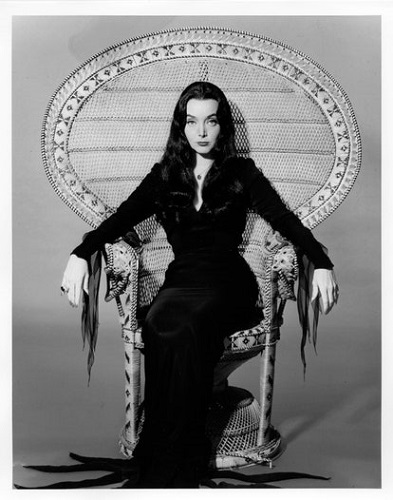 The series only lasted for two seasons, but later gained a cult following with re-runs as well as two '90s movies with Anjelica Huston giving a brilliant take on Morticia, complete with raised eyebrows and red lips. Most TV moms during the show's original run had a June Cleaver type of vibe as exemplary homemakers with immaculate kitchens, scheduled meals, and rather bland personalities. Or they were supernatural beings who desperately tried to assimilate to our world, like Samantha Stephens [of ‘Bewitched’], but Morticia bucked societal norms in several ways.
She oozed sexiness with a signature style featuring a form-fitting black dress, long black tresses, and a decidedly pale face — a look that inspired millions of future goth girls. She wasn't afraid to be overtly sexual with her husband Gomez by enticing him with “the look,” relishing in his peppered kisses on her arms, donning new lingerie, or whispering sweet nothings in French. 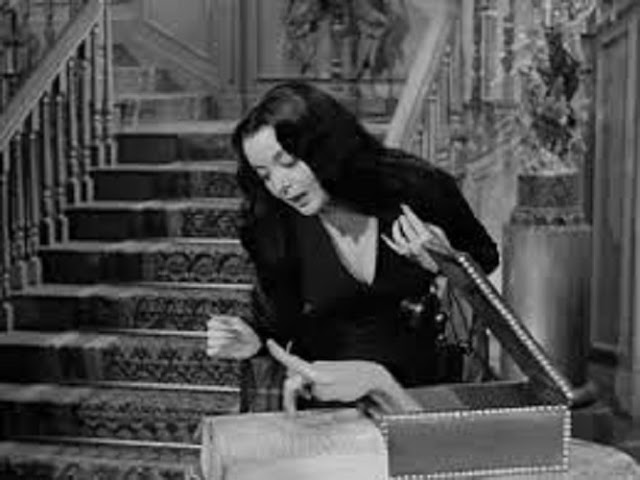 It was a stark contrast to the squeaky-clean portrayal of '60s TV marriage that didn’t even allow most couples to sleep in the same bed, much less show sexual advances from a wife. This passion carried over into the movies with Morticia instructing her hubby to let her do the torturing and complimented him on, ahem, a job well done the previous night. Yesssss.
Her marriage is absolutely #RelationshipGoals for anyone who wants a healthy long-term relationship because it challenges the stereotype that years of love and kids automatically leads to passive misery. Her guy is passionately in love with her, views her as his equal, supports her endeavors, respects her thoughts sans mansplaining, and frequently compliments her brains and beauty. Oh, and let's not forget that he's filthy rich. It’s a bold, refreshing portrayal of a marriage that was certainly revolutionary then and isn’t explored as often as it should be on TV today.

Morticia is the voice of reason and the queen of zen, even when things get a little chaotic in her home. Her ability to find beauty in thunderstorms (literal and metaphorical) and other things normally perceived to be dark while exhibiting a relentless optimism about life is admirable and inspirational. She’s valuable and interesting outside of her mom and wife roles and has imperfect moments that root her in reality.

Typical “ladylike” activities like knitting, picking fresh flowers, and cooking are never mundane with Morticia as she makes items out of odd materials, conjures up strange concoctions, and arranges thorny stems in vases. And what other witch is an expert at cultivating carnivorous plants, playing the shamisen, emitting smoke from her body, challenging local politicians, taming beasts, fencing, painting, and being effortlessly cool while chilling at home 99% of the time? Morticia is truly the GOAT of all activities.

Her excellence is also exhibited via her unconventional yet supportive and smart parenting style. Yeah, she allows Wednesday and Pugsley to raise poisonous spiders and play with guillotines, but she also listens to them, values their feelings, and encourages their autonomy. She will quickly jump into action in their best interests, whether it involves hiring a psychologist or advocating for changes at their school. When Pugsley joined the Boy Scouts — which was their equivalent of him joining a wayward gang — she was concerned but she gave him the space to explore things on his own terms. He was her “unconventional” child who sometimes wanted to be like everyone else and Morticia didn’t try to force him fit perfectly into their family dynamic. She was generally patient, kind, and respectful towards her children and encouraged them to stay true to themselves even when it goes against the grain.

Morticia Addams expertly balances family and her unconventional personal interests alongside a rosy general outlook on life. She has a partner who adores her and works with her in a partnership to solve problems and rear their children with a loving hand. And she’s no doubt a witch icon, from her fashion sense to her occasional penchant for potions and “smoking.” We absolutely stan this creepy, kooky, and incredibly dope character who is dearer to us than all the bats in all the caves in the world.

Here are the appearances by Carolyn Jones in the role which qualified the multidimensional Morticia Addams for membership in the TVXOHOF: 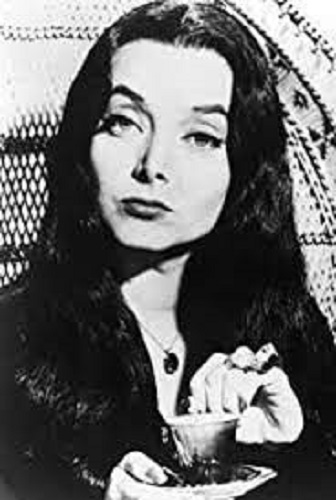 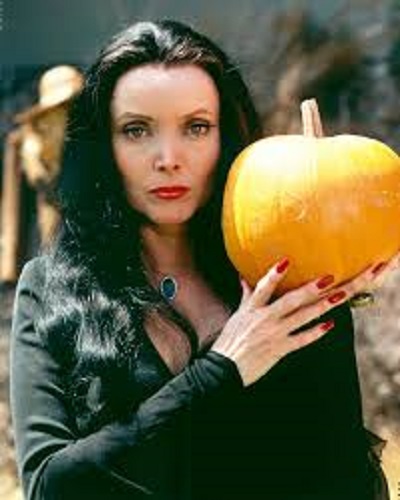 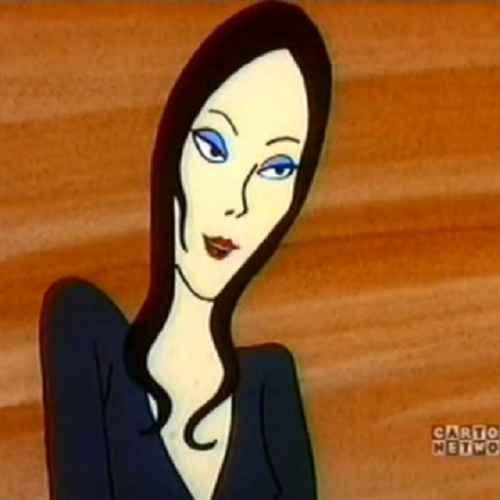 Welcome to the Hall, Mrs. Addams! 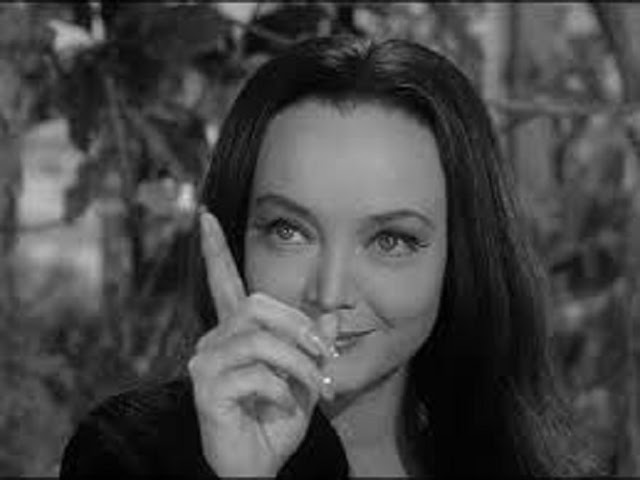