HAPPY FOURTH OF JULY (FROM THE TOONIVERSE)

"I've known some deadly professors in my time."
Magersfontein Lugg
'Campion'
The story of Albert Campion's forays into the fairy tales that are murder mysteries begins around 1930, with assistance from his manservant, Lugg.  Lugg was once a burglar, but he knew there was no future in it if he kept getting so fat that the only way out for him was through the front double doors.
At the time we met Lugg in Earth Prime-Time, he was about 55 years of age.  (The novels by Margery Allingham do not have anything to do with the Toobworld perspective of her most famous characters.)  This means he was born in 1875.  And as such he was old enough at sixteen - in 1891 - to have already embarked on his burgling career.
I'm sure there are plenty of deadly professors from the Victorian era whose paths may have crossed with that of Magersfontein Lugg in his home universe of BookWorld.  But how many of them in all the fictional worlds could have also been translated into the shared universe of television?  I think there's only one who should be considered...
I think Lugg was referring to the Napoleon of Crime, Professor James Moriarty. 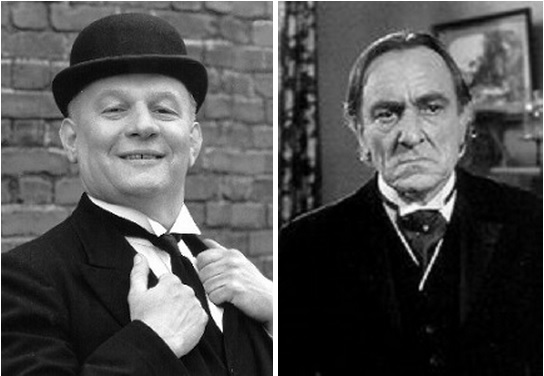 I mentioned Lugg at the age of sixteen in 1891 because that was the year in which Moriarty had his final encounter with the consulting detective Sherlock Holmes.  Who knows what kind of encounter Lugg had with this deadly professor?  Perhaps he was one of the street urchins who worked for Holmes in the loose-knit gang known as the Baker Street Irregulars and Moriarty sent his minions after the lad because of some incriminating information Lugg was trying to deliver to Holmes and Watson.
It's a thought.  But since I'm working on a theory that Albert Campion was also the Fifth Incarnation of The Doctor, it doesn't seem so far-fetched.....
BCnU!
Posted by Toby O'B at 12:30 AM 0 comments

THE "RAFFLES" - "MURDER, SHE WROTE" CONNECTION 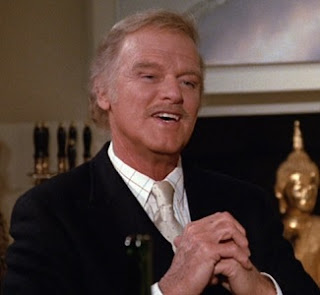 "For several years she has deluded herself
that I'm some sort of modern-day Raffles,
the gentleman jewel thief."
Denis Stanton
'Murder, She Wrote'

This fits right into the policy of the Toobworld Dynamic in that he never mentioned any source material for Raffles, and therefore it can be assumed that Denis was speaking of an historical personage just as "real" as he was in Earth Prime-Time.

A.J. Raffles was an "amateur cracksman" created in a series of stories by E.W. Hornung, the brother-in-law of Sir Arthur Conan Doyle.  I suppose he was meant to be the flip side of the World's Greatest Consulting Detective.  Raffles, sometimes with his friend Bunny Manders, had been seen in several movies and on TV as well.  In the mid-1970s he was seen in his own TV series, only about six episodes or so, played by Anthony Valentine. 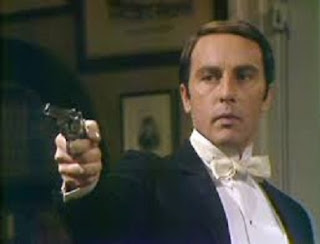 Having read those stories back during my Sherlockiana phase of that same period, I hope to one day add this series to the library at Toobworld Central.

In the meantime, that tossed-off quote by Denis Stanton serves as a legitimate link between the 'Raffles' series and 'Murder, She Wrote'.

By the time July rolls around, the movie season is in high gear.  This year we kicked it off with "The Avengers: Age Of Ultron" and then into "Tomorrowland" and now "Jurassic World" has pretty much shut it down with its juggernaut of a box office take.

So thought we might honor a movie franchise character who made the transition from the Cineverse to Toobworld and played by the same actor.  Especially since this year marks the 50th anniversary of his first foray into film and 20 years since he traveled to Toobworld.  I spy with my little eye.... 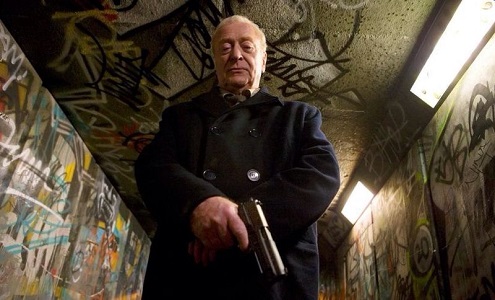 For three years running, British secret agent Harry Palmer appeared in movies based on the Len Deighton novels and starring actor Michael Caine, who looked amazingly like the "real" Harry Palmer.
And because they once again starred Michael Caine, I had no problem in absconding with the first three movies out of the Cineverse and making them part of Earth Prime-Time.  But within the reality of Toobworld, the movies still existed as movies, especially thanks to a reference to Harry's stylish eyeglass frames back in the 1960s by a suspected rapist (as seen in an episode of 'Endeavour'.)

So as our summer movie character inductee into the Hall during the year-long British theme, Harry Palmer is the perfect choice.

Welcome to the Television Crossover Hall Of Fame! 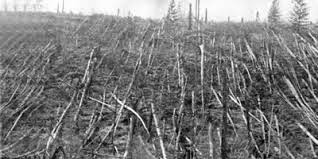 On June 30, 1908, there was a massive explosion in the skies over Tunguska, Russia.  Here’s how it played out in the Real World, according to Wikipedia:


The Tunguska event was a large explosion, caused by an asteroid or comet, which occurred near the Podkamennaya Tunguska River in what is now Krasnoyarsk Krai, Russia, at about 07:14 KRAT (00:14 UT) on June 30, 1908. The explosion occurred at an altitude of 5–10 kilometres (3–6 mi) at 60.886°N, 101.894°E. It is classified as an impact event even though the object is believed to have burst in the air rather than hit the surface. Different studies have yielded widely varying estimates of the impacting object's size, on the order of 60 m (200 ft) to 190 m (620 ft). It is the largest impact event on or near Earth in recorded history. 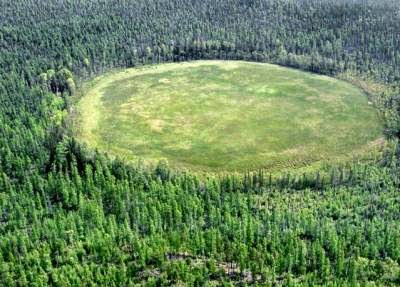 It is estimated that the Tunguska explosion knocked down some 80 million trees over an area of 2,150 square kilometres (830 sq mi), and that the shock wave from the blast would have measured 5.0 on the Richter scale. An explosion of this magnitude would be capable of destroying a large metropolitan area, but due to the remoteness of the location, no fatalities were documented. This event has helped to spark discussion of asteroid impact avoidance.

But as I pointed out, that’s the Real World.


Tunguska has been invoked in several TV shows and I’ve added two more - ‘Batman’ & ‘Saturday Night Live’ - to create the background for one of my favorite villains on ‘Batman’.  Here are the official references to Tunguska (from Wikipedia) that can be used in the world of Earth Prime-Time…..

Labels: As Seen On TV, Location Shot, Missing Links, Outside the Box, Twipped from the Headlines, Who's On TV

MINUTIAE MONDAYS - THE LEAGUE OF THEMSELVES... ON SKATES! 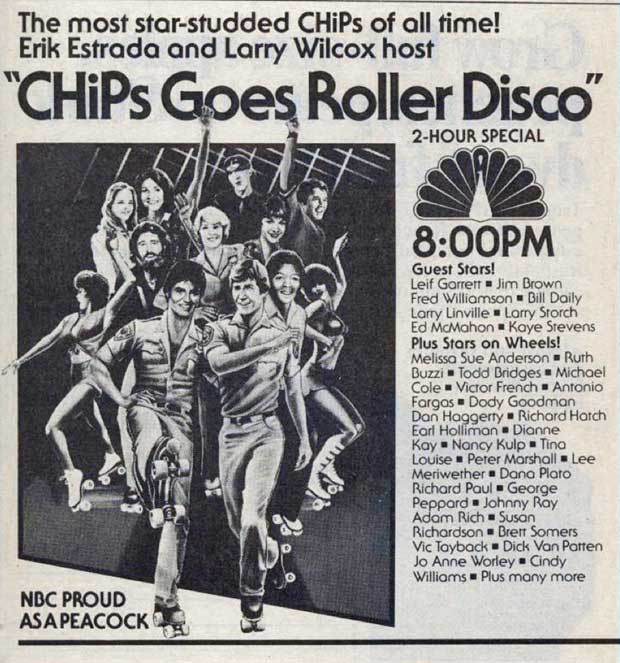 In September of 1979, Ponch organized a roller disco dance for charity and - thanks to Ed McMahon and a talent agent named Balford - he was able to get a lot of Hollywood stars for the event, to participate in the "Skate With A Star" segment of the evening.
What makes these appearances a perfect storm of members in the League of Themselves is that none of them were linked on-air with the shows or characters they play in Toobworld.  (Or in the case of Johnnie Rivers, his song "Secret Agent Man" and its connection to 'Danger Man'.)  That would have been a bleep-load of Zonks to deal with!

Some of these stars served as judges for the Beauty Contest: Andrew Prine, Todd Bridges, Melissa Sue Anderson, Ruth Buzzi, Richard Paul, and Lee Meriweather among them.  Earl Holliman presented the winner of the contest to the gathered crowd.

If any of these stars appeared in other shows as themselves - for instance, Earl Holliman ('The Larry Sanders Show') and Cindy Williams ('Strip Mall') - then this episode serves as a central link to connect them all.....

Labels: As Seen On TV, La Triviata, League of Themselves, Life During Prime-Time, O'Bservations, Outside the Box, Sked Alert, TV Classique 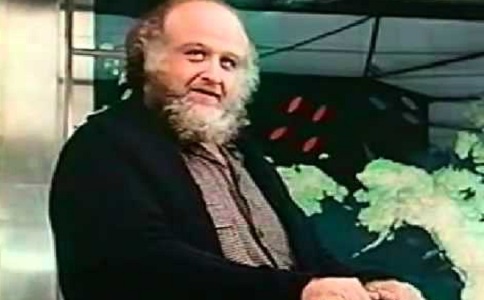 "I've heard or read about actors being asked the immortal question:
'Why have you never married?'
They answer with the immortal excuse:
'I just haven't found the right girl.'
Because I'm on the hefty side, no one's asked me yet.
If they do, that's the answer I'll give.
After all, if it was good enough for Monty Clift or Sal Mineo..."
Victor Buono

Yesterday, such a coy answer was rendered no longer necessary.  If only Mr. Buono lived to see it.....

Labels: League of Themselves, Life During Prime-Time, Tele-Quotes, Twipped from the Headlines

VIDEO SUNDAY - GAY MARRIAGE IS NOW LEGAL, EVEN IN TOOBWORLD