Ross Pearsall has done it again at his Super Team Family blog with an excellent comic book cover that mashes together two TV series that were comic books as well: 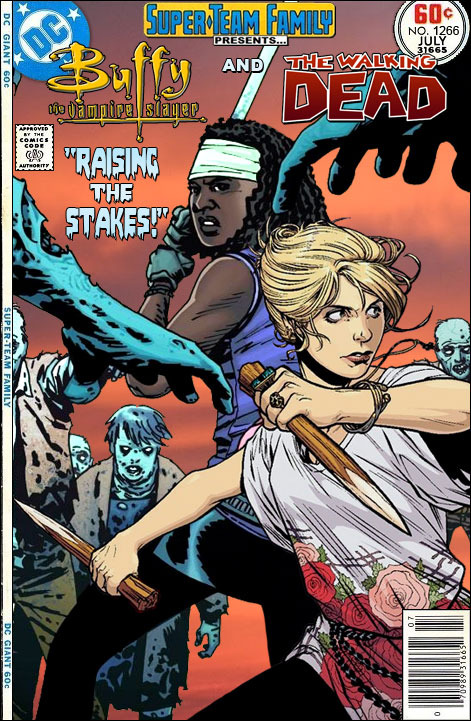 Luckily for Toobworld, this is only in the Comic Book Universe!  I'd hate for Earth Prime-Time to lose Buffy to Zombie Toobworld! 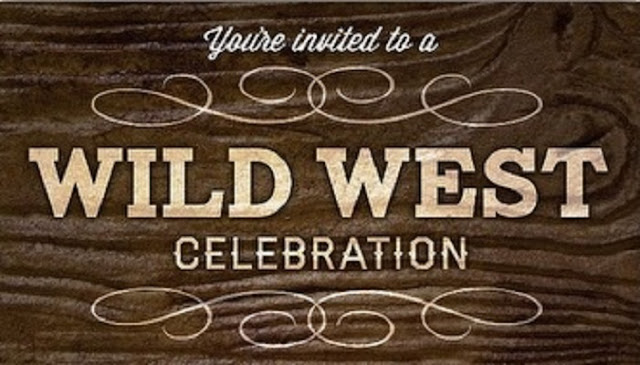 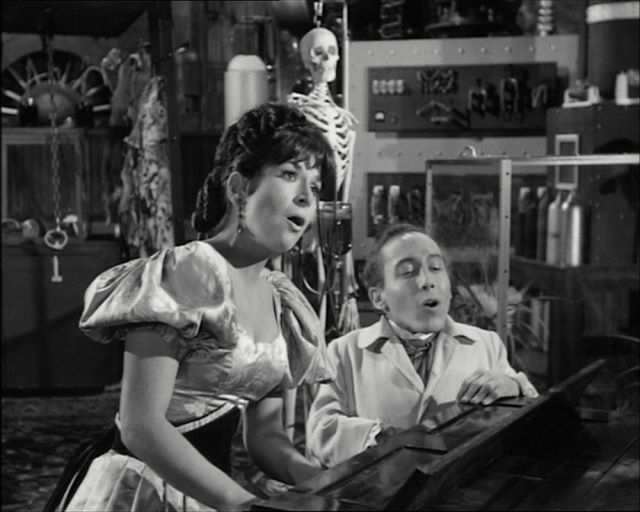 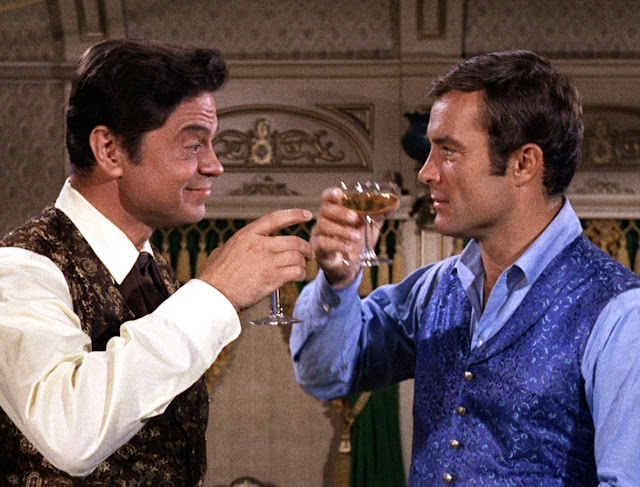 ALL THE BEST ON YOUR BIRTHDAY, BROTHERMINE! 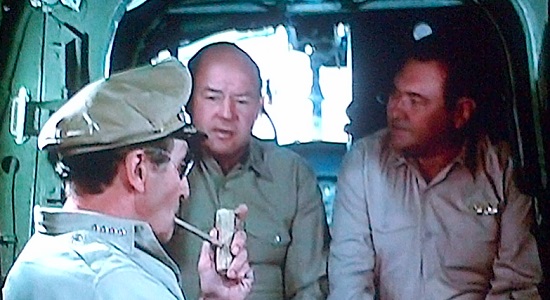 'THE BLACK SHEEP SQUADRON'
"UP FOR GRABS"

From the IMDb:
General MacArthur is visiting everyone in the Pacific and Boyington's men are his next stop. On the day he is suppose to arrive, some Japanese soldiers show up and take everyone captive, with the intent to grab MacArthur. But fortunately Wiley and Casey went fishing so they weren't captured. So they must try and find a way to stop them.

From TV.com:
Early Sunday morning, Casey and T. J. go fishing. Anderson is fixing breakfast, and Hutch is hitting the showers. Suddenly, Meatball yelps, and things get eerily quiet. Pappy comes out of his tent to find out what's wrong, and comes face to face with Japaneses soldiers. The pilots are herded into the compound, and a wounded Anderson and Hutch are dragged to their feet. The pilots are put in the SHeep's Pen, Bragg puts up the flags, and Pappy goes to play Reveille. As Casey and T.J. hear the music and head back to camp, they see that the flag is upside down. T.J. hides under the Pen and hears what is going on---MacArthur is coming to La Cava, and the Japanese are there to capture him. Casey takes off in a plane to try to warn Espritos Marcos about the Japanese, but is shot down. When MacArthur's plane lands....you just have to watch the show! Look for the editing continuity error in the Sheep's Pen.

From Wikipedia:
Douglas MacArthur (26 January 1880 – 5 April 1964) was an American five-star general and Field Marshal of thePhilippine Army. He was Chief of Staff of the United States Army during the 1930s and played a prominent role in the Pacific theater during World War II. He received the Medal of Honor for his service in the Philippines Campaign, which made him and his father Arthur MacArthur, Jr., the first father and son to be awarded the medal. He was one of only five men ever to rise to the rank of General of the Army in the US Army, and the only man ever to become a field marshal in the Philippine Army.
MacArthur was recalled to active duty in 1941 as commander of United States Army Forces in the Far East. A series of disasters followed, starting with the destruction of his air forces on 8 December 1941, and the invasion of the Philippines by the Japanese. MacArthur's forces were soon compelled to withdraw to Bataan, where they held out until May 1942. In March 1942, MacArthur, his family and his staff left nearby Corregidor Island in PT boats andescaped to Australia, where MacArthur became Supreme Commander, Southwest Pacific Area.

For his defense of the Philippines, MacArthur was awarded the Medal of Honor. After more than two years of fighting in the Pacific, he fulfilled a promise to return to the Philippines. He officially accepted Japan's surrender on 2 September 1945, aboard the USS Missouri anchored in Tokyo Bay, and oversaw the occupation of Japan from 1945 to 1951. As the effective ruler of Japan, he oversaw sweeping economic, political and social changes. He led the United Nations Command in the Korean War until he was removed from command by President Harry S. Truman on 11 April 1951. He later became Chairman of the Board of Remington Rand. 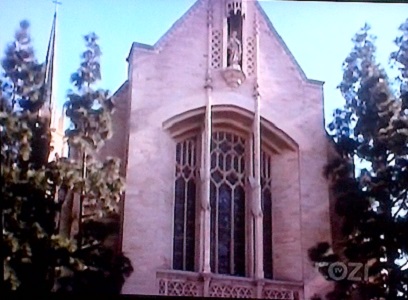 "MURDER THROUGH THE LOOKING GLASS"

Disguised as a priest, a DSS Internal Affairs agent who called himself Patrick Francis requested that Jessica Fletcher meet him at St. Jerome's Church in Hartford.

From Wikipedia:
Saint Jerome (Latin: Eusebius Sophronius Hieronymus; c.  347 – 30 September 420) was a Latin Christian priest, confessor, theologian and historian, who also became a Doctor of the Church. He was the son of Eusebius, born at Stridon, a village of Italian influence on the border of Dalmatia and Pannonia. He is best known for his translation of most of the Bible into Latin (the translation that became known as the Vulgate), and his commentaries on the Gospels. His list of writings is extensive.

Known as the “protégé” of Pope Damasus I, who died in December of 384, Jerome became well known for outlining the type of lifestyle that was acceptable for Christians living in cosmopolitan centers like Rome. In many cases, he focused his attention to the lives of women and identified how a woman devoted to Jesus Christ should live her life. This concentration stemmed from his close patron relationships with several prominent female ascetics who were members of affluent Roman “senatorial families”.

He is recognised as a saint by the Roman Catholic Church, the Eastern Orthodox Churches, the Lutheran Church, and the Church of England (Anglican Communion). Jerome is commemorated on 30 September with a memorial.

Just thought you'd like to know on his day of remembrance..... 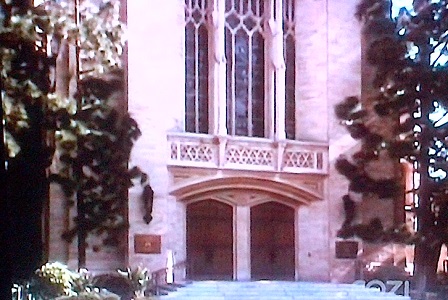 Greg David interviewed Hélène Joy about a variety of subjects, but of course, I'm only interested in 'The Murdoch Mysteries' Season 9.....

Showrunner Peter Mitchell told me at the end of Season 8 that this upcoming season will feature more of William and Julia.
We did give the fans some of that last season, but they wanted more. What they did get, they loved. We’re allowed to play and flirt and be completely open and there is way more of that this year because we know how much the fans love it.The next step for Julia and William is a baby…I think that would be amazing. I think it would be hilarious because I think they’d be terrible parents. They’re a couple of nerds who don’t really have any idea what they’re doing. Neither of them would stop working, so how would they balance that?

If I remember correctly, Julia is unable to have children after an abortion that went wrong.  Here's hoping it was a medical misdiagnosis....

The new season begins in about a week, on October 5th. At least in Canada, that is.....

"I thought being a farmer's wife was going to be all 'Darling Buds Of May'."
Karen Pryor
'Vera' 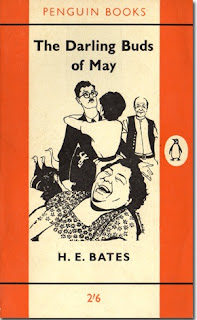 It was produced by Yorkshire Television for the ITV network. It is set in an idyllic rural 1950s Kent, among a large, boisterous family, the Larkins.  Yorkshire TV called it a drama but audiences and critics have generally
considered it a comedy/drama.

From what I can gather from the IMDb, there haven't been any other Zonks pertaining to 'The Darling Buds Of May' in other TV shows.  In fact, they don't even list this one.  There is a slightly obscure one from the move "Shawn Of The Dead", but that a problem for the Cineverse.

So as far as I'm concerned, Mrs. Pryor's reference was to the series of books by H.E. Bates.  And the TV show was the "real life" of the Larkins upon which the books were based.  Should there ever be another quote like this, hopefully it will be along the lines of this one so that we can ignore the existence of a TV show.

VIDEO SUNDAY - A FISTFUL OF SPIDERMAN

First off, let me tell you that I already know where this "movie" will end up - in Doofus Toobworld.

I think this was a fan-made spoof, more of spaghetti action movies than of the comic book Spidey.

I won't tell you any more about it, but I will offer up this trailer as a warning.....