I'm flying out of Denver Sunday morning, and I'm not sure if I'll have the daily Tiddlywinkydink up at all. (By the time that I get home, I'll be concentrated on cleaning up my appearance for work Sunday night and just being reunited with my cat, Sand.)

Um... besides, I'm a little stuck on ideas for a post. I suppose I could go to the Trueniverse timeline to find a little something that might work.....

I know how upset the throngs will be over this, but I'll double up on Monday if I don't figure something out.

In a recent episode of 'Supernatural', Dean Winchester said, "'The X-Files' is a TV show. This is real!"

Even though 'Supernatural' and 'The X-Files' should be sharing the same TV universe, I don't think that line has to be considered a Zonk. (For those just joining us, a "Zonk" - an old term from 'Let's Make A Deal' - is a discrepancy in which one TV show refers to another one as a TV show, even though they both share the same world.)

Either one of these options could be considered as the basis for a TV show that dramatizes the X Files cases. If the movie did boffo box office, it would stand to reason that somebody would develop a TV show based on it. The same could be said for "From Outer Space", the book by Mr. Chung. (And although macabre, Chung's murder in an episode of 'Millennium' might have heightened interest in creating a TV show based on his work.)

Whether or not this show would have the backing of the FBI, as the old series 'The FBI' did, I can't say. (But I tend to doubt it.)

So no Zonk here. Dean Winchester obviously saw this show based on the "real life" X-Files work of Fox Mulder and Dana Scully.

No other information was given, but I think it's safe to assume that the characters in the Toobworld version of 'The X-Files' were dramatizations of the two agents. The names "Mulder" and "Scully" have popped up far too often in other TV shows to bother dancing around the possibility here.

Bill Crider's Pop Culture Magazine, which you will find linked at the left, pardners, reprinted this news item:

"For decades scientists have been mystified by the strangely-shaped skulls of the duck-billed, crested dinosaurs known as lambeosaurus. Their nasal passages are extremely long and twisty, looping up over the tops of their skulls. Originally it was believed that these were just super-noses providing a keen sense of smell. But today a group of Canadian and U.S. researchers present their latest findings about the lembeosaurus at the Society for Vertebrate Paleontology in Ohio — it turns out the nasal passages may have been used for fairly complicated communication between dinosaurs."

This report limits the possibility of dino-lingo to the lambeosaurus, but that's not good enough for Toobworld. It probably applies to all dinosaurs in TV Land, especially since we know they had a very advanced society - as seen on 'Dinosaurs!'......

When Dick Findley and Pete Conrad found out about Nixon scratching the Apollo Space program (as mentioned in "Lunacy", an episode of 'Law & Order: Special Victims Unit'), it was rumored that Conrad would have been on Apollo 20. In Toobworld, we can assume Findley would have been on it as well.

Here are some pertinent lunar nuggets about Conrad from Wikipedia:

Charles "Pete" Conrad, Jr. (June 2, 1930 – July 8, 1999), was an American astronaut and the third person to walk on the Moon. He also described himself as the first man to dance on the Moon. He served on Gemini 5 and 11, Apollo 12, and Skylab 2 missions, and may have been scheduled for the Apollo 20 mission, which was cancelled.

"If you can’t be good, be colorful.” Pete's personal motto.

"Lunacy", an episode of 'Law & Order: Special Victims Unit', provided an alternate revision to the Toobworld timeline which separates the TV Universe from the Trueniverse.

Colonel Dick Findlay, still working for NASA with hopes of being a part of the projected 2018 return to the Moon, related how he was in a Florida diner with Pete Conrad when they got the news about Nixon cancelling the rest of the Apollo space program in favor of the space shuttle system.

This would place his lunch with a real-world figure on January 5th, 1972, or the next day.

Here are the opening paragraphs of the statement released by President Richard Nixon on the 5th:

"I have decided today that the United States should proceed at once with the development of an entirely new type of space transportation system designed to help transform the space frontier of the 1970's into familiar territory, easily accessible for human endeavor in the 1980's and '90's.

This system will center on a space vehicle that can shuttle repeatedly from Earth to orbit and back. It will revolutionize transportation into near space, by routinizing it. It will take the astronomical costs out of astronautics. In short, it will go a long way toward delivering the rich benefits of practical space utilization and the valuable spinoffs from space efforts into the daily lives of Americans and all people.

The new year 1972 is a year of conclusion for America's current series of manned flights to the Moon. Much is expected from the two remaining Apollo missions - in fact, their scientific results should exceed the return from all the earlier flights together. Thus they will place a fitting capstone on this vastly successful undertaking. But they also bring us to an important decision point - a point of assessing what our space horizons are as Apollo ends, and of determining where we go from here."

I'm about 1800 miles away from the home base of Toobworld Central, but of course the TV Universe is never far away.

These were the references that popped up just yesterday:

A souvenir shop that sold "Zuni Fetishes"
("Trilogy of Terror")

And we drove past the headquarters for FOX31.....

That post the other day about the use of "Columbia" instead of "Colombia" in an on-screen graphic for "Chuck" reminded me of a MacDonald's commercial from the seventies.

A family is on a road trip, with Grandpa along for the ride. The kids say they're hungry so the Dad says they'll stop at MacDonald's. This surprises Grandpa. "There's a MacDonald's in Beatrice, Kansas?"

In the commercial, he pronounces the town's name as "Be-a-triss". However, the town has always known itself as "Be-a-trice".

And yet, with the constant inundation of the commercial, the kids of the town started to call the place they grew up "Be-a-triss".

Not sure whatever happened with that situation, but I don't think the same problem might occur with this example. 'Chuck' is a fun show, but it's not doing that well in the ratings, so it wouldn't have the same kind of saturation effect.

Plus, not everybody's really reading the titles, and even if they are, a good portion of them either didn't notice the mis-spelling, or didn't know the correct version either. And hearing something over and over would be more powerful than reading something just once.

So! My first full day in the Denver area! Today Joe Beninghof, my brother in all but blood, drove us down to Colorado Srpings to visit the "Garden of the Gods" nature park and the Olympic Training Center. Sadly none of my other peeps were there - what's a Garden of the Gods if only the godling of tele-cognizance shows up? 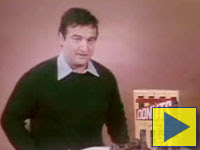 And at the Olympic training center, I developed this craving for little chocolate donuts!

Anyway, for today's Tiddlywinkydink, here are some shows tied to the Denver area:

The Closer from 1998 CBS (This was the show about the ad agency with Tom Selleck and Ed Asner, not the police procedural.)
Dynasty from 1981-89 ABC
House Rules from 1998 NBC
Whispering Smith from 1961 NBC
Alias Smith And Jones ABC (occasionally)
Maverick ABC (occasionally)
Peacemakers from 2003 USA 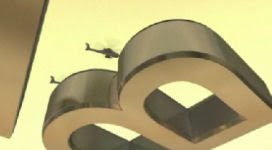 Those giant block-letter location graphics for 'Fringe' left me uncertain as to their status within the "reality" of Toobworld - could the citizens of TV-Baghdad actually see the name of their city floating in the air above them in the series premiere? But I'm thinking now that - unless the Toobworlder is tele-cognizant and knows that they live in TV Land - those titles are just as invisible to them as are the graphics for episode titles and guest casts. They are probably provided (again - within the "reality" of Toobworld) by some unseen higher power for the benefit of those of us viewing at home in the Trueniverse.

And who might this higher power be? Whether he's the hairy thunderer or a cosmic muffin, whoever he* is, he's a lousy speller.

In the 'Chuck' episode "Chuck vs. The Break-Up", an on-screen graphic established the opening scene as taking place in Bogota, Colombia, three years ago. However, "Colombia" is spelled "Columbia".

This doesn't alter Toobworld; Earth Prime-Time would still mirror Earth Prime in the correct spelling of the country's name. That onscreen graphic couldn't be seen by anybody who happened to be in the shot, so it's not like it's an alternate dimensional version of the country we have in the real world, except for what takes place there on occasion - like that 2005 visit by "Mr. & Mrs. Anderson".....

*Yes, Ladies, I am a sexist. The higher power would be male. Everything in Life proves that He made the world easier for men - no monthly cycles, no pain of childbirth, we don't have to shave our pits (unless we want to), we don't have to kill our feet in high heels, and there are plenty of bathroom stalls in movie theatre men's rooms......