I won't be posting as often in the blog for a while; I think my body can hopefully handle such a shock.  I really do need to get back to work on the Toobworld Chronicles.  Even if it does end up being a load of tripe, it will at least be my tripe.

In 2015 I did a theme for the year when posting about the Television Crossover Hall of Fame: "The British Invasion", in which almost all of the inductees (minus the special tributes) were of British origin.  I have a theme in mind for this year, one which I had used back in 2009 as part of a mega-celebration of the Toobworld Dynamic concept.  For 2016 we will be honoring members of the League of Themselves - those people whose fictional televersions (played by the real versions from the Trueniverse) interacted with characters from various TV shows.  (Their appearances on game shows, variety programs, talk shows, and in the news could be counted as part of their tally, but would not make them eligible for membership.)

More often than not, January has been the month in which a classic TV star was inducted.  And I think I have a great League of Themselves member for this singular "honor": 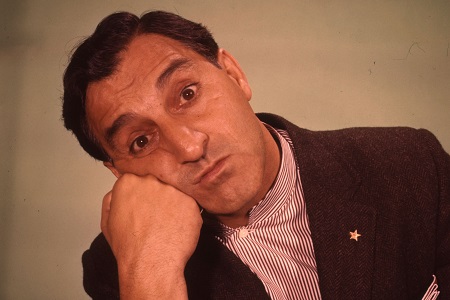 About two months ago, I joined a fun page on Facebook dedicated to Danny Thomas and 'Make Room For Daddy'.  I've always intended to induct the main character from that show, Thomas' alter-ego Danny Williams, a nightclub comic and family man.  And eventually I will.  But I hadn't given any consideration to Danny Thomas and his role in the fictional universe of Earth Prime-Time.

This will rectify that.....

'The Jack Benny Program'
- "Johnnie Ray Show" (1953)
Johnnie Ray's contract to appear on Benny's TV show arrives and Jack is horrified by his $10,000 fee. He storms over to Ray's home and offers him $250 instead. Johnny sings "Please Don't Talk About Me When I'm Gone," and "Cry" for Jack and the performance is so devastating, Jack is turned into a helpless bowl of jelly. Jack pays him $15,000. At the end of the show, Danny Thomas makes a guest appearance to plug his show 'Make Room for Daddy' (1953). 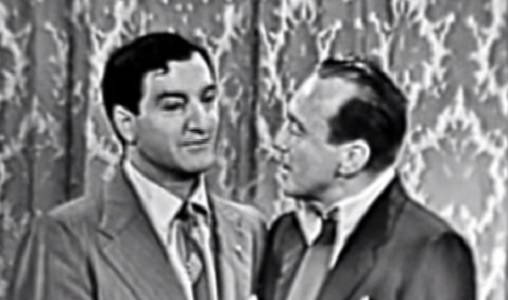 - "Jack Goes to Nightclub" (1959)
His sponsor walks out on Jack's show, when his sponsor's in town for contract renewal, so Jack's afraid to take him to a nightclub featuring a comic competitor. A puppet show seems a safe (and cheap) alternative, but filling in for the sore-throated puppeteer is golden throated Danny Thomas, whose charity and charm entrance the sponsor, but paralyze Jack.

'The Dick Van Dyke Show'
- "It May Look Like a Walnut" (1963) ... Kolak
Rob enjoys a scary televised sci-fi movie while Laura cowers in fear from it, but the next day details of that movie, where Earthlings are being taken over, appear to be coming true. 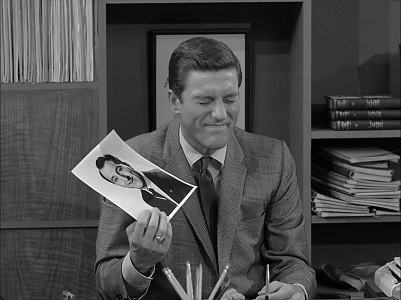 Kolac was merely a figment of Rob's nightmare, but it was acknowledged that he looked like Danny Thomas, which guaranteed his place in Earth Prime-Time even if he never did appear in any of these other shows. 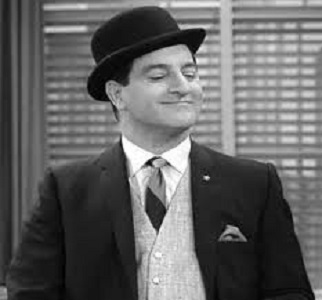 "Danny Thomas?
What is a Danny Thomas?"
Kolac
'The Dick Van Dyke Show'
"It May Look Like A Walnut"

'The Joey Bishop Show'
- "Danny Gives Joey Advice" (1963)
Joey discusses parenting challenges with Danny and they imagine themselves as rebellious younger versions of themselves. 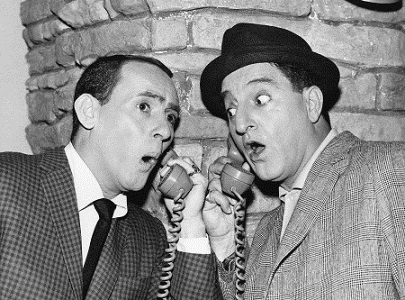 - "My Buddy, My Buddy" (1963)
The cameo appearance for Danny Thomas is listed in the end credits as follows:

- "Andy Williams Visits Joey" (1964)
Andy Williams guests on Joey's show, than he and wife Claudine visit Joey's home. Ellie and Claudine are members of the same woman's club and their benefit dinner is coming up. Andy and Joey have no doubt who they expect to entertain. 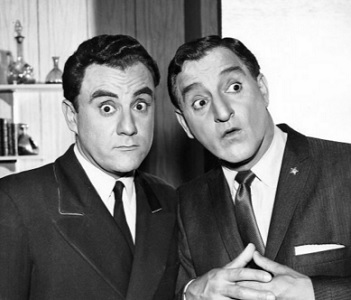 Danny Thomas checks into the Park Central but due to a mix-up, the penthouse is not available. Jose comes to the rescue and gives Danny his quarters. 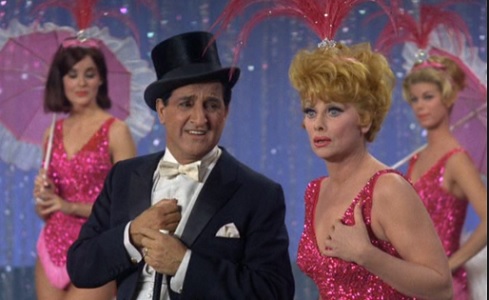 As Mr. Mooney's new secretary, Lucy is sent to a television station to deliver some papers. While waiting in the lobby, she's mistaken for one of the new dancers hired for a Danny Thomas TV special. Not about to pass up the opportunity, Lucy forges ahead despite knowing none of the choreography. The rehearsal is disastrous as she goes the wrong way, throws a shoe, and constantly wallops Danny with her prop umbrella. 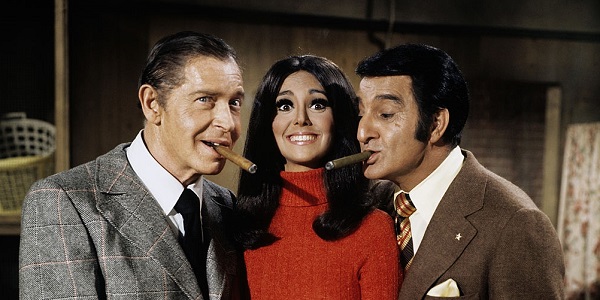 (All of the episode summaries are from the IMDb....)

As you can see, there were more than enough appearances as himself to qualify for entry into the Television Crossover Hall of Fame.  And as for those game shows and variety programs...... 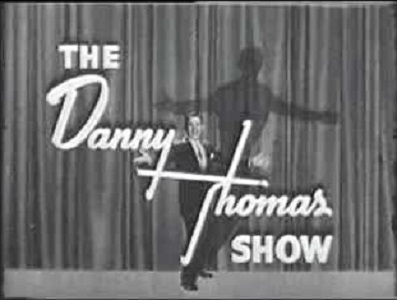 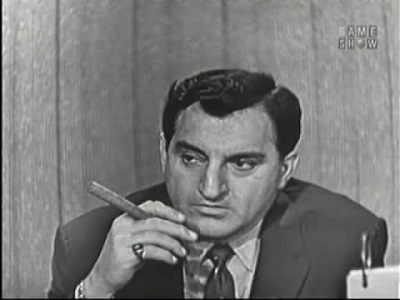 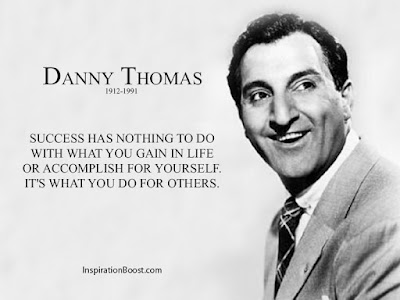 January 6 marked the 104th birthday for Danny Thomas, so there's another good reason to induct him into the Hall for January!

"I'm not a psychopath, Anderson.
I'm a high-functioning sociopath.
Do your research."
Sherlock Holmes
'Sherlock' 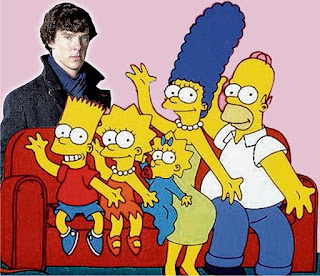 "Look at me!  I'm a sociopath!"
Bart Simpson
'The Simpsons'

FLASHBACK -
Holmes & Watson stand in the doorway of what looks like a fairly ordinary room somewhere. They stare up wide-eyed at what they can see inside. Offscreen, an elephant trumpets loudly.
-----------
And suddenly I wondered if they had become involved with Gregory West.....

Although the online blog for Dr. Watson is a tie-in to 'Sherlock', I tend to ignore it.  I'm generally concerned only with what I can see on the screen.  However, I don't think the entry for the "Elephant In The Room" has any impact on Earth Prime-Time, nor does it conflict with what I have in mind for Mr. West.

Here are a few lines from that blog entry:

Sherlock's had some mad cases over the last couple of years and I wouldn't say I've ever got entirely used to them but nothing, and I mean nothing, could have prepared me for what we found at 29 Ryder Lane in Brockley. 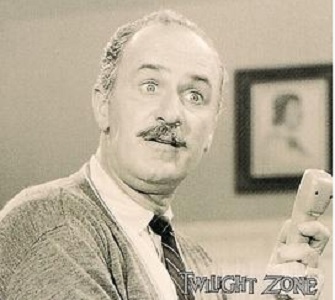 If the name is not familiar to you, Gregory West was a playwright in "A World Of His Own", the final episode for the first season of 'The Twilight Zone'.  He had a gift for the descriptive, a command over the power of the Word - anything he described into his tape recorder would become Reality.  And so long as he didn't erase that tape or burn it, then his creation would remain a reality.  (At one point he summoned an elephant to prevent his wife Victoria from escaping the house.) 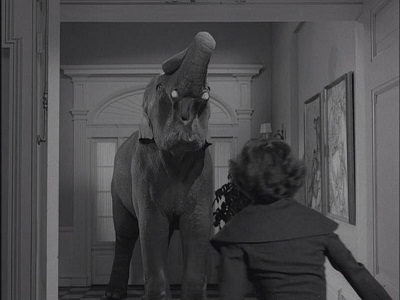 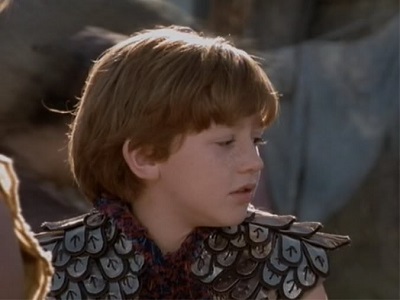 It's the Toobworld belief that West was descended from Evander, the demi-god from the Age of Legend, who was able to summon anything from his imagination and make it real.  Other TV characters who share his bloodline would be Anthony Fremont, also of 'The Twilight Zone', a comic book artist played by Harry Anderson in an episode of 'Tales From The Crypt', a gunner trapped on a disabled bomber during World War II (as seen in 'Amazing Stories') and a cartoonist whose comic strip could come to life in 'The People Next Door'.

For Gregory West, his life achieved harmonic bliss once he created his vision of a perfect wife and after both his first wife and Rod Serling himself were banished back into the aether from which they were created.  To my mind, it is one of the most perfect season-ending cliff-hangers ever (Would the show come back and would Rod?), a category for which it's not often considered.

But what happened to West and his new wife Mary after the episode ended?

The universe of Television, like any world which was based on plot, would have demanded a dramatic situation to arise from that ending.  The neighbors - and surely there would have been a Gladys Kravitz type next door?* - would most likely have brought it to the attention of the police that Victoria West had disappeared, only to be replaced by Mary.

Eventually I think the Wests would have had to move away from such prying eyes.  And with his powers to create his own Realiy, Greg West might have teleported them anywhere to live.  And when the mood struck them, perhaps they would spend the theatre season in the suburbs of London so that he could keep an eye on any productions of his plays. 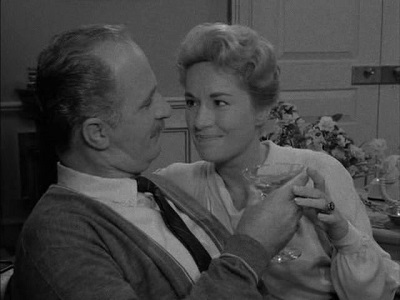 So it could have been the home of Gregory and Mary West at 29 Ryder Lane in Brockley.  And falling back on old habits, he had summoned the elephant again.  Perhaps it was meant to "run interference' for them as they made their escape from those two dead bodies - when they were still alive, of course.

And who were they?  Who can say?  Agents of THRUSH or KAOS?  Gatherers from "The Village"?  At any rate, they represented some shadowy organization who knew of the "magical" powers of Gregory West.  And as to whether they saw West as a threat to the world in general or as an asset to be used for their own purposes, I don't have the answer.

It's just a theory, one which I could never state categorically to be true.  For you see, I believe 'Sherlock' takes place in Limbo.  That character we see as a modern day consulting detective is actually the soul of the real Sherlock Holmes. 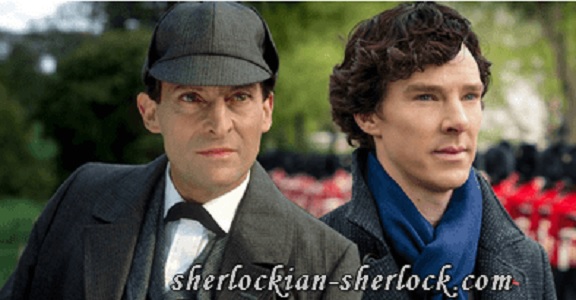 Dr. John Watson, however, is the soul of a different man by the same name, one actually from the modern era who perished during active duty in Afghanistan.  Holmes is probably acting as this Watson's mentor in the afterlife, just as Gene Hunt did for Sam Tyler and Alex Drake in 'Life On Mars' and 'Ashes To Ashes' respectively.

As was the case with Gene Hunt, the soul of Sherlock Holmes looked nothing like he did in real life.....

And this means that more than likely Gregory West was dead as well.  (Had to be - I doubt he dictated such a scenario to live in!)

I'm afraid Mary would have been left behind in Earth Prime-Time, immortal so long as her snippet of recording tape survived.  Even if she had "died" at some point, she would have simply vanished back into starstuff.  I don't think she would have had an actual soul.

So there's my post celebrating Sherlock Holmes on what may have been his birthday.....

* And now I have an idea for a new entry about Gregory West! 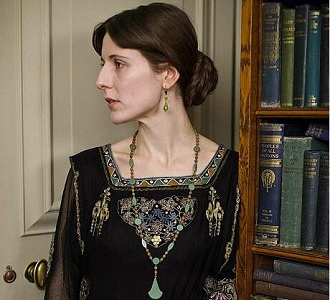 Adeline Virginia Woolf (née Stephen; 25 January 1882 – 28 March 1941) was an English writer and one of the foremost modernists of the twentieth century.

During the interwar period, Woolf was a significant figure in London literary society and a central figure in the influential Bloomsbury Group of intellectuals.

Woolf suffered from severe bouts of mental illness throughout her life, thought to have been what is now termed bipolar disorder, and committed suicide by drowning in 1941 at the age of 59.

RECASTAWAY TOOBWORLD
"Life in Squares"
Played by Lydia Leonard
- Episode #1.1 (2015)
Played by Catherine McCormack
[This was a case of recastaways.  It's best to keep it out of Earth Prime-Time.] 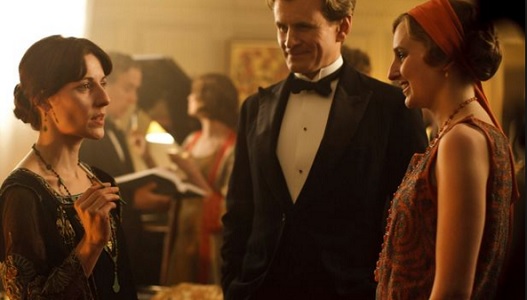 O'BSERVATION:
I never noticed her in that Season 4 episode of 'Downton Abbey', but in the sixth season premiere she was mentioned again in connection to that earlier appearance.