One last visit with the featured movie of the month......

Although Phil Silvers was already dead by the time this episode of 'The Simpsons' was first broadcast (November 1, 1985 vs. January 6, 1994), his portrayal of Otto Meyer in "It's A Mad, Mad, Mad, Mad World" must have been considered by the producers to be the most recognizable of the "Big W" treasure hunters.  (Buddy Hackett's Benjy Benjamin shows up at the dig site as well.)

Or it could be that the original scene from the movie was the best place to insert Bart Simpson...... 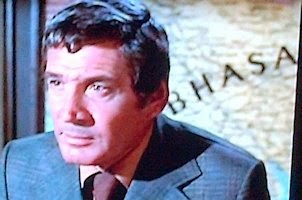 The Toobworld globe and atlas got a boost in February when I saw this episode on COZI-TV.  Vietnam's understudy, Bhasa, was in turmoil and publisher Glenn Howard traveled there to "observe" the overthrow of the legally elected government by a military junta jointly headed by Colonels Mara & Bandar (with Bandar entertaining notions about going solo....)

Like I said, Bhasa was a Vietnam understudy.  Taking place in 1970, its former president Ben Kaliman had led the people in throwing off the yoke of French occupation seventeen years earlier, in 1953.  There were rice paddies, and a Buddhist monk named Anartha (favorably compared to Ghandi) was installed as the country's new ruler.  (But the Colonels planned on ruling through him.) 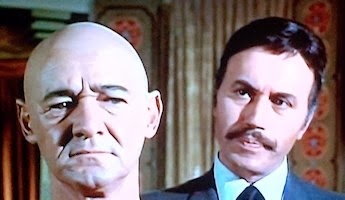 But the thing was, all of the principle guest stars who were Bhasa citizens were (for the most part) played by Caucasian actors:
and
Madame Noh, as the widow of the Bhasarian minister of the treasury, is easy enough to splain away.  She could have been a Westerner who married Huan Noh* and moved to his country. 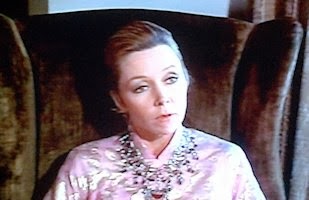 As for the others, perhaps this stand-in for Vietnam was indeed in the East, but farther north - in the land of the steppes.  The terrain that we saw when Glenn Howard visited the rebel camp suggested the rough mountainous area one would expect from a Mongolian neighbor.

But I think the answer is simpler - with the French occupying the country for so long, many of those in powerful positions in Bhasa were descended from French forebears, with some having "bred out" any of their once dominant native traits. 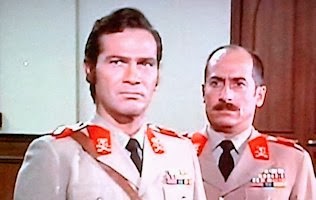 Bhasa has not been seen in Toobworld since 1970, so it's pozz'ble, just pozz'ble, that it changed its name once the junta was removed from power - in order to start fresh.  That way we can choose from any one of the other fictional Asian countries from Toobworld.

Or maybe it was annexed by the North Asian People's Republic (found in 'Mission: Impossible' - "Amnesiac"). 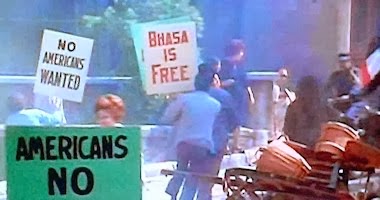 * I could have sworn I heard the name as Guan Noh and thought to myself: "If they really did get away with that, well played!"

NOT SO STIRLING SILLIPHANT 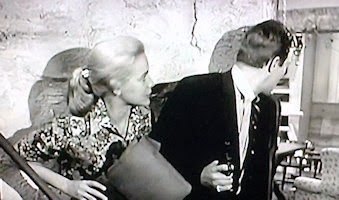 Detective Jim Halloran was trapped in a light-house with its keeper, Andy Stephenson and his daughter Linda when a gangster named Cassidy and a few of his thugs arrived on the island to kill them all and get back some incriminating evidence about Cassidy which Linda had.

Halloran was able to kill one of the three gangsters with Cassidy and was hiding behind a stone wall near the staircase when Linda came down to suggest that they just hand over the evidence so that Cassidy would let them go.  But Jim knew it was too late for that; the gangsters would have to kill them all.

Linda replied: "Sorry – what an empty little word.  How very much it doesn't cover."

I'm sorry.  Just around the corner there are three men with guns waiting to kill you, and you're going to get all philosophical at that moment?

Stirling Silliphant is a fantastic writer, but that line was so unrealistic under the circumstances that it took me right out of the moment.

NOT OF THIS EARTH PRIME-TIME - DR. WATSON & DR. WATSON

'MAN IN A SUITCASE'
"BRAINWASH" 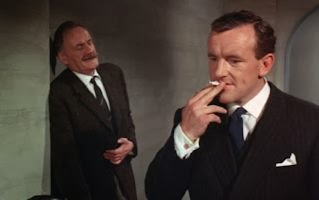 In this episode, two actors teamed up who played Dr. John Watson of 221B Baker Street fame, one past and one future.  H. Marion Crawford, leaning against the wall, was in the 1950s series with Ronald Howard as Holmes.  A few years after this episode, Colin Blakely would be in the Billy Wilder movie "The Private Life Of Sherlock Holmes" with the master sleuth played by Robert Stephens.

As I said, I can't use this for Earth Prime-Time.  Even though 'Sherlock Holmes' with Howard and Crawford was one of several incarnations of the pair before Jeremy Brett and David Burke/Edward Harwicke came along, that 1980s series is the official televersion.  So that must be in an alternate TV dimension.

As for the Cineverse, that movie universe must have plenty of alternate dimensions as well in order to accommodate so many portrayals of the world's first consulting detective.

My thanks to the spy blog "Double O Section" for pointing this out......

Labels: Alternateevee, As Seen On TV, Big Screen TV, Blogmates, By Any Other Name, Game of the Name, O'Bservations, Recastaways, Zonks


OF COURSE "Inner Toob" would make a contribution to Earth Day 2014!  Just not the way you might expect..... 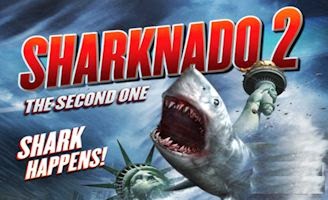 Syfy has gone back to the poisoned well for a new "Sharknado" movie - "Sharknado 2: The Second One" will take place in New York City and once again star Ian Ziering and Tara Reid return to battle the beasties dropping from the skies.  And this time Viveca A. Fox will be joining it.

The "Sharknado" films do not take place in the main Toobworld.  They exist in the dimension known as Disaster Toobworld in which all of those TV movies about massive tornadoes, ice storms, global flooding etc. take place.  It's a nice place to visit, but your televersion wouldn't want to live there. 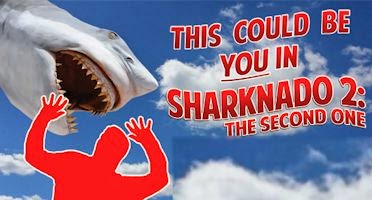 (If my televersion from that dimension did survice any of those previous disasters, I'm sure "my" number is up in this one since it's set in New York.

How could Bruce the Shark resist a tasty morsel such as myself?

Actually.....  because of everything that happened to me earlier this year, I may just post a picture of myself as a survivor of "Sharknado 2: The Second One" when the movie airs.

And who came up with that movie title?  Captain Obvious? 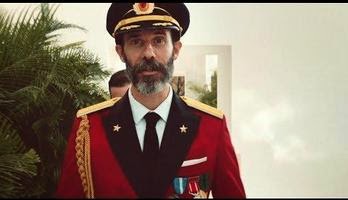 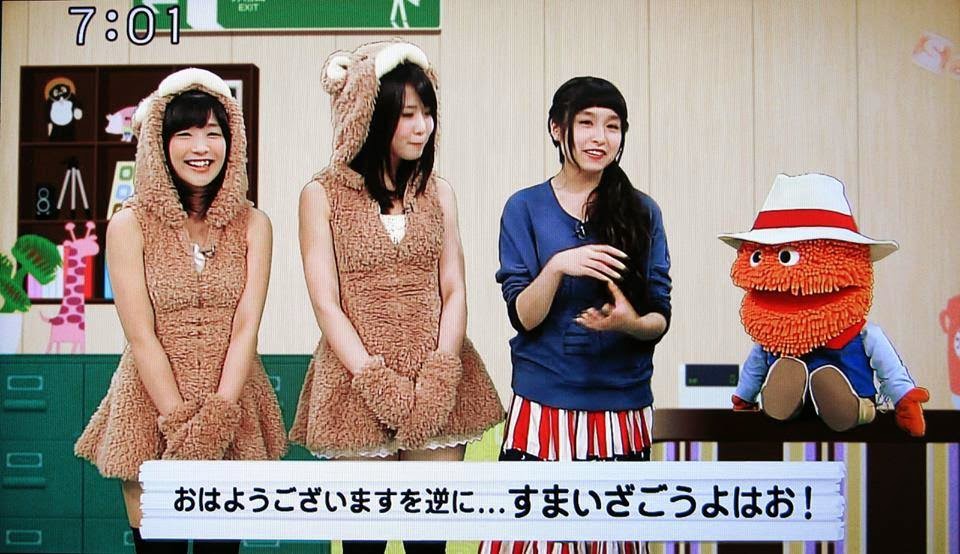 "Morning television in Tokyo. Certainly from what Japanese phrases I can understand, there is much more journalist excellence and integrity than "The Today Show"."

Based on the outfits worn by two of those girls, maybe this is the Japanese version of FOX News......

SNEAK PEEKERY: FROM TONIGHT'S EPISODE OF 'GAME OF THRONES'

When miserly Alexander Gifford wanted his wife killed off because she had found all of his hidden bankbooks and had started spending the money, he found a way to contact a contract killer to do the job.  But when he found out how much it would cost him, Gifford changed his mind.

The killer (played by great character heavy Jack Lambert) was a thoughtful guy, though - he was a family man too and knew that money could be tight.  So he offered to suggest a few ways in which Gifford could do the murder himself to save a few bucks..... 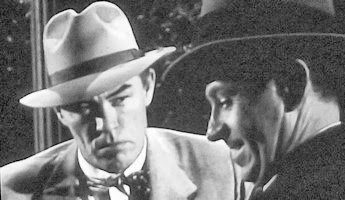 Hired Killer:
"I saw this one on TV.
A dame did it. A cute dame.
She clobbered her old man over the head
with a frozen leg of lamb."

Alexander Gifford:
"At 59 cents a pound?"

Gifford went a different route, but still meat oriented - he treated the ham that she was going to eat with botulism he had stolen from a lab.

But what a great reference to an earlier episode of 'Alfred Hitchcock Presents'!  Of course, it's a Zonk as well.... 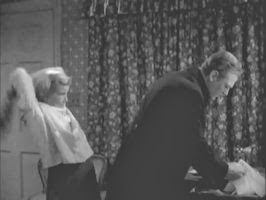 Pregnant Mary Maloney killed her philandering, abusive husband when he told her that he was leaving her for another woman.  It was a momentary act of insanity as she picked up the frozen leg of lamb she hoped to prepare for dinner and clubbed him over the head with it.

But after that, everything was calculated.  It turned out that Mr. Maloney was the police chief of their town, which meant the detectives were going to be extra thorough in their investigation.  And Mary realized that they might be biased in his favor against her, not accepting her word that he was abusive to her.

So she staged the scene to look like a burglar had broken in and killed Chief Maloney in a struggle.  And she put the leg of lamb into the oven in order to cook the murder weapon.

When the detectives did arrive, the lead investigator was suspicious, but the lack of a murder weapon, some kind of club, kept him from fully suspecting Mary.

Being the polite hostess, she offered to feed the police officers and fed them all a full meal - with the main course being the lamb.  The police ended up eating the murder weapon!

"Lamb To The Slaughter" was broadcast in April of 1958.  "Cheap Is Cheap" aired a year later.  And unlike another anthology series, 'The Twilight Zone', the episodes of 'Alfred Hitchcock Presents' should all take place in Earth Prime-Time.

Therefore, the murders committed by Mary Maloney and Alexander Gifford had to be in the same TV dimension.  There was no way for that nameless killer to have seen her do it on a TV show.

A dramatic recreation on the other hand.....

According to HItchcock's serlinguistic sermon at the end of the episode, Mrs. Maloney didn't get away with murder.  But I'd like to think that public outcry over a woman's right to defend herself against spousal abuse, plus sympathy over her being a new mother (She would have delivered by the time of the trial.), may have swayed the judge to reduce her sentence to time served.

Unfortunately, domestic violence is a problem to this day here in the real world as well as in Toobworld, but on Earth Prime-Time, Mary Maloney may have become the cause celebre which sparked the movement to ensure that women could protect themselves against abusive partners.  And she might have heightened the need for more research into the extreme mood swings brought on by pregnancy.

So yeah, a quick made-for-TV movie was produced about the Mary Maloney case.  It was an O'Bvious choice since the murder was so unique.  And that hit man must have seen it.

I hope you enjoyed your Easter lamb......

This was the 9500th post I've presented here in the Inner Toob blog.  We've been in operation since August of 2004 and it's been a fun way to pass the time away.  (Although the vowel in that verb could have just as easily been different!)  I'm hoping you've been finding it as much fun to visit here as it has been for me to provide these glimpses into the alternate reality of Television.