This month we’re kicking off a mini-theme which will eventually have five inductions from the same TV series – four in succession and then the last saved for the penultimate ceremony.

One of the oldest TVXOHOF traditions is the celebration of The Fool in Toobworld.  So to begin this theme, there was no better candidate than…. 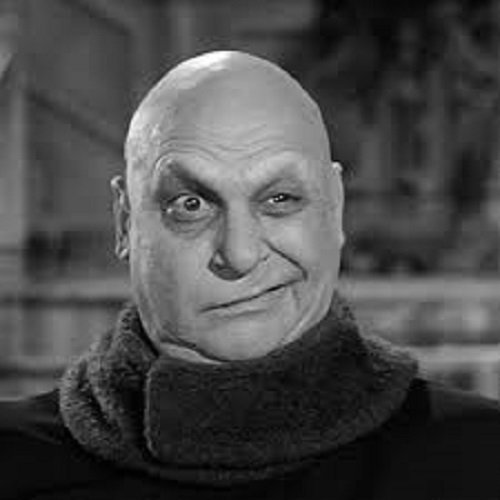 From Wikipedia:
Uncle Fester is a member of the fictional Addams Family. He was played by Jackie Coogan in the original television series.
Uncle Fester is a completely hairless, hunched, and barrel-shaped man with dark, sunken eyes and often a deranged smile. He always wears a heavy, full-length fur coat. 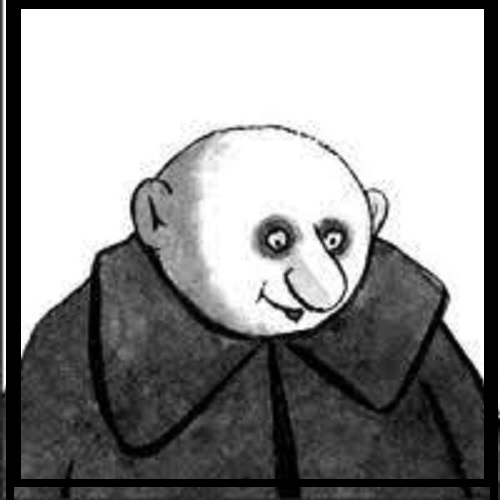 Fester was derived from a character drawn by cartoonist Charles Addams, although these were single-page cartoons, with no stories or character names. Nevertheless, the character is recognizable in a number of cartoons, both by his appearance (bald, stooping, sunken eyes) and behavior (e.g. turning the shower to a special "scalding" setting, feeding his garden plants blood plasma, and releasing an eagle on the neighbor's homing pigeons). While he is occasionally seen with the rest of the family, particularly on anthology covers, he is also seen on his own more often than the others. He is sometimes indicated to live in a small shack surrounded by a wrought-iron fence. 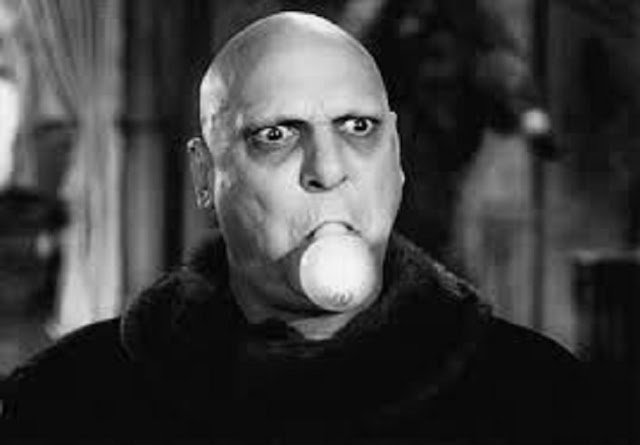 Fester has a strange ability to generate electricity. He would often demonstrate this by putting a light bulb in his mouth, which would illuminate, accompanied by a loud, crackling noise. He claims to possess 110 volts of power in one episode of the sitcom, while in another episode he demonstrated his "magnetic" quality by levitating a metal paperweight up to his hand. When struck directly on the head by a fired cannonball, he appears only mildly dazed, while the cannonball bounces off his head. 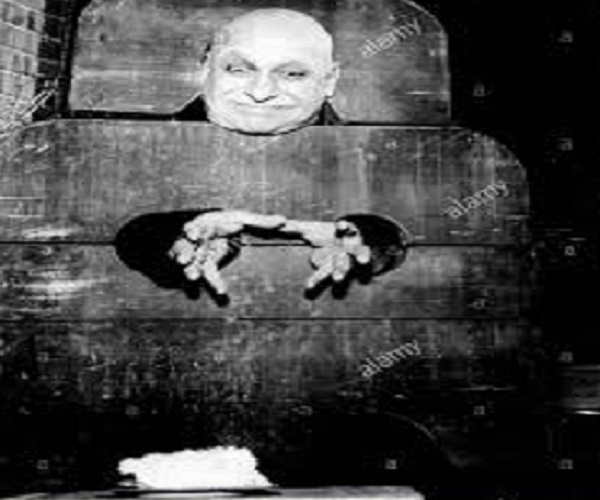 Uncle Fester at times has severe migraines but appears to enjoy them. Fester relieves his migraines by placing his head in a large screw press and tightening it to levels that normal people would not be able to withstand. At times, Fester uses the screw press on his head simply for enjoyment. 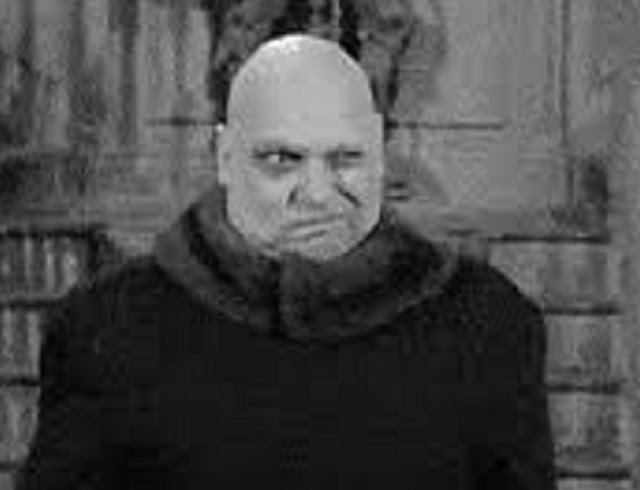 Despite Uncle Fester's menacing look and bizarre behavior, he is gentle and caring to everyone. He shows great respect to Gomez and Morticia. He has always exhibited love and great care to his niece and nephew, despite their frequent naughtiness.
In the original sitcom of the 1960s, Fester is said to be Morticia's maternal uncle (his name rhymes with Morticia's mother Hester's.)

In the 1960s television series, Fester (played by Jackie Coogan) is uncle to Morticia Addams. In one episode, he became perplexed when asked his last name, suggesting he has somehow forgotten it. 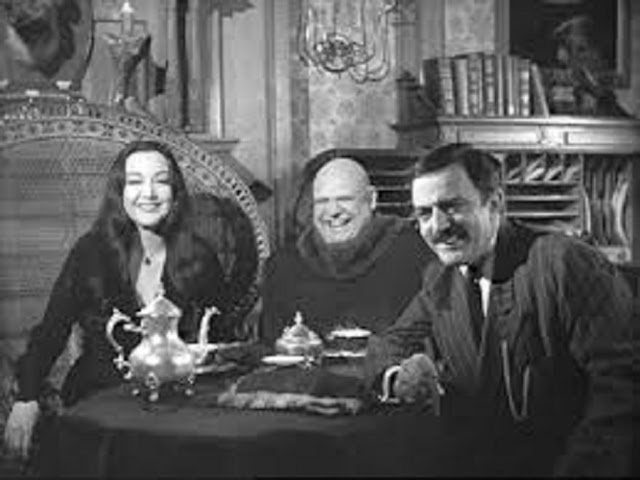 In several episodes, Fester refers to the Addams lineage as if it were his own, possibly implying some degree of intertwined consanguinity in both their family lines, but the flashbacks in the episodes "Morticia's Romance, Parts 1 and 2," clearly establish him as Morticia's uncle, brother of her mother, Hester Frump, a.k.a. Granny Frump (Margaret Hamilton), whose maiden name was similarly unrevealed. In various episodes, he was a partner in typical sitcom schemes with Gomez, Morticia, or Grandmama Addams, indicating no real preference for any family member over others.
Fester's known ancestry dates back to his Great-Grandfather Blob (not to be confused with Gomez's Cousin Blob, a two-headed ghost), who received the gift of a sacred ruby after he had pried it from the head of a Hindu (to whom it was giving a terrible headache). The ruby remained in the family until Fester unthinkingly used his slingshot to hurl it at a yowling stray cat. "Well, it was the only rock in the house!" he said in his defense.

Per the 1960s sitcom, little is known of Fester's childhood, save that his father (Morticia's maternal grandfather) was an excruciatingly strict man who severely disciplined him, paddling him even when he was good and paying him to stay out of public. (Fester considered this to be experience in "public relations.") He refused to allow Fester to even touch a battle-axe (a treasured toy among people with the Addams's macabre tastes) until he was eight.

As an adult, Fester defended his father's strictness, pointing to his own character as proof of its effectiveness: "I didn't become what I am by accident! I had an upbringing like no other!" Sometime prior to Morticia's marriage to Gomez, Fester worked as a newspaper columnist, writing advice for the lovelorn, but left that job because people kept suing him. 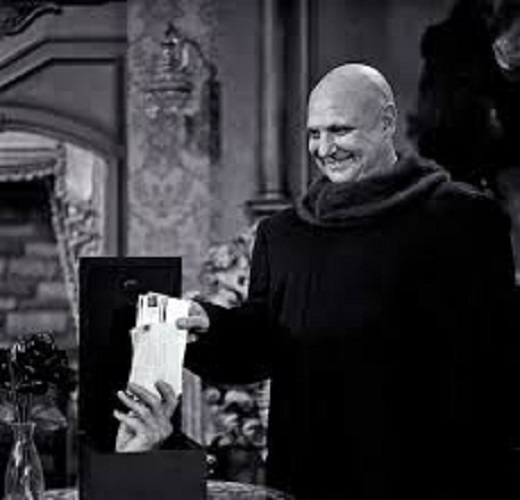 Fester has also offered contradictory information about his educational background. In the sitcom's first episode, he notes that he never went to school ("And look how [well] I turned out!"), but he later claims to have failed recess three times. As an adult, Fester took correspondence courses in various subjects, and his educational endeavors occasionally formed an episode's main plot. It may be from one such course that he obtained his fraternity paddle, which he once threatened to use on Wednesday in imitation of his father's punishment style; however, like many an uncle, Fester proved to have more bark than bite in dealing with the children. 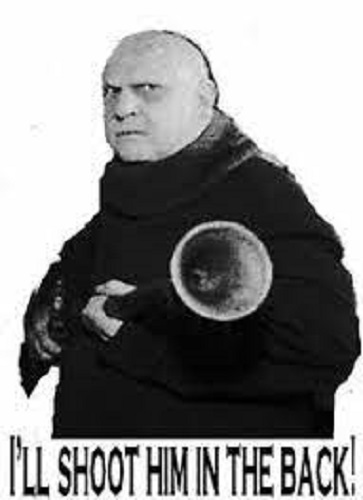 When he suspects someone of maligning, cheating or otherwise mistreating anyone in the family, Fester is ever ready with his blunderbuss "Genevieve", eager to "shoot 'em in the back!" However, he is far less eager in meeting a malefactor in a face-to-face duel; he was briefly enthusiastic about a pistol duel with an enemy until he asked, somewhat timidly, "Does he get one too? .... Loaded?" 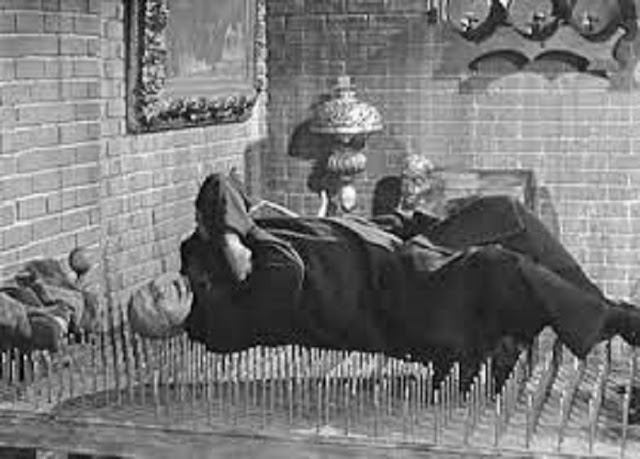 Another prized possession was his cannon, "Old Reliable", which he normally kept in his bedroom. Fester maintained a treehouse in the Addams yard and frequently retreated to his closet to think. After receiving the gift of a motorcycle in the episode "The Addams Family Meets a Beatnik", Fester often drove it through the living room, inevitably crashing in the conservatory (several episodes used identical recycled footage of this scenario). Fester also collects three-dollar bills. 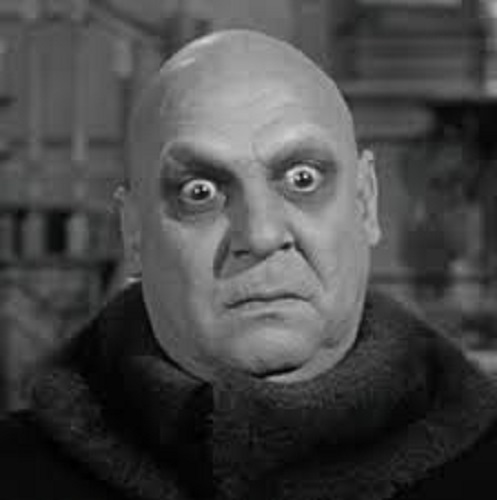 Uncle Fester is a multiversal – several dimensions of the TV Universe, several dimensions of the Cineverse, Stage World, and whatever the video game world is called,  And it all began in that universe which houses the one-panel comic strips.
In the greater tele-mosaic, Fester can be found in Earth Prime-Time, Toobworld2, the Tooniverse, and at least one other alternate Toobworld.  He is being inducted as a multidimensional, but only for those incarnations which feature Jackie Coogan in the role.

Here are Uncle Fester’s qualifications for his membership: 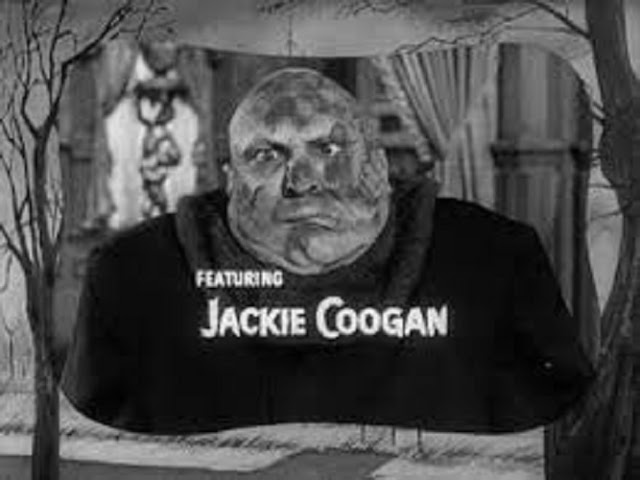 The misadventures of a blissfully macabre but extremely loving family. 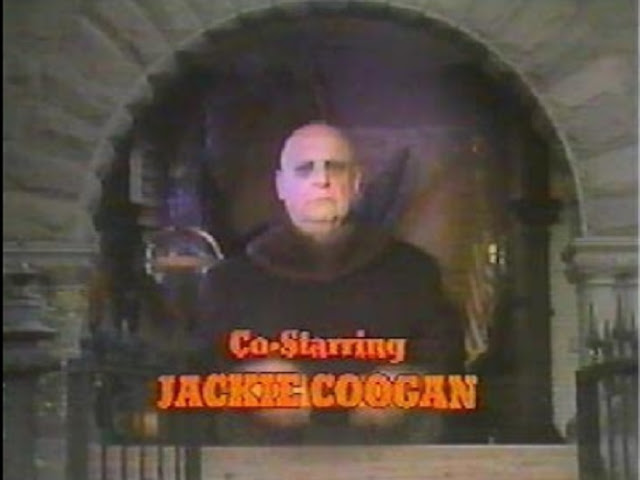 A revival of the popular '60s TV comedy series "The Addams Family" has them preparing for Halloween in their own inimitable way.
The focus of the plot is around the holiday where the Addams will be celebrating all hallows eve. To them, it's their Christmas time. Before the end of the night, a legend by the name of Cousin Shy comes to give gifts and carve pumpkins. Meanwhile, a group of crooks led by the boss (Parley Baer) want to infiltrate the Addams' home to steal their family fortune by luring Gomez to a lodge meeting far away. 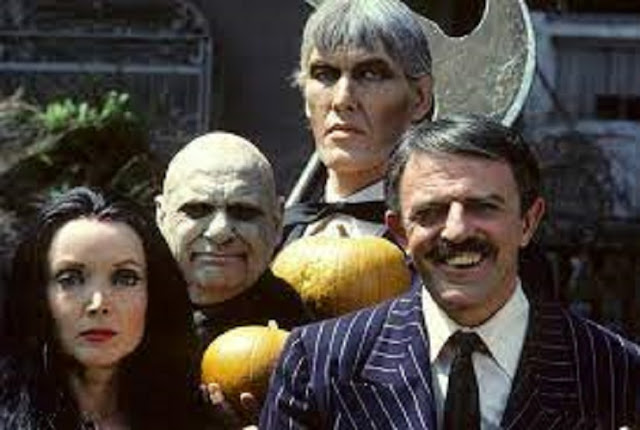 Simultaneously, Gomez (John Astin) is worried about his brother Pancho (Henry Darrow) having feelings for Morticia (Carolyn Jones).
For a TV movie, it very much feels like an extended episode to the show but all in good fun. It's rather shocking, considering the director, David Steinmetz, had no experience prior or after this event. Was he even directing? 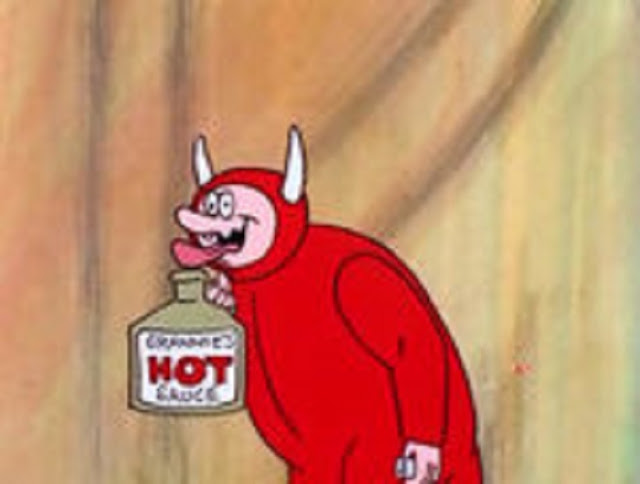 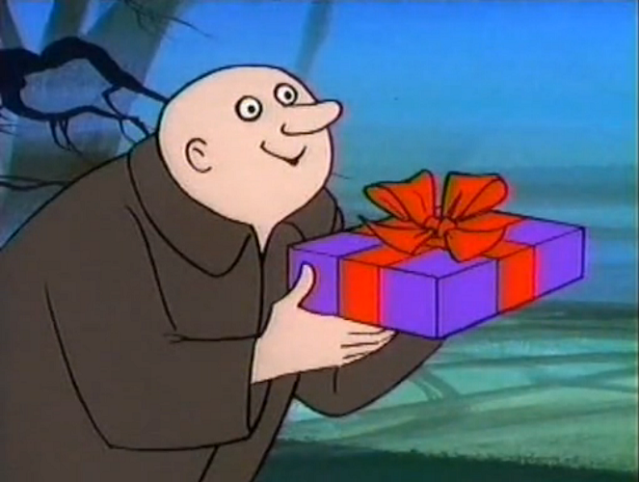 The New Scooby-Doo Movies
- Wednesday Is Missing (1972)
... Uncle Fester (Coogan's voice in both)

The gang's van breaks down near the Addams Family mansion. They end up staying with the creepy and spooky family after a ransom note is discovered in the house. Their daughter, Wednesday, has been kidnapped and will meet an uncertain doom if the Addams' estate is not given over to a mysterious stranger.

The third episode in ‘The New Scooby-Doo Movies’ is certainly the best so far. In the film, the Mystery Machine and its gang are driving through the swamp when once again the van ends up crippled. Being unable to drive, the group is visited by Lurch who then takes them to the creepy castle, which is owned by the Addams' Family. Soon the gang must start an investigation when Wednesday goes missing. 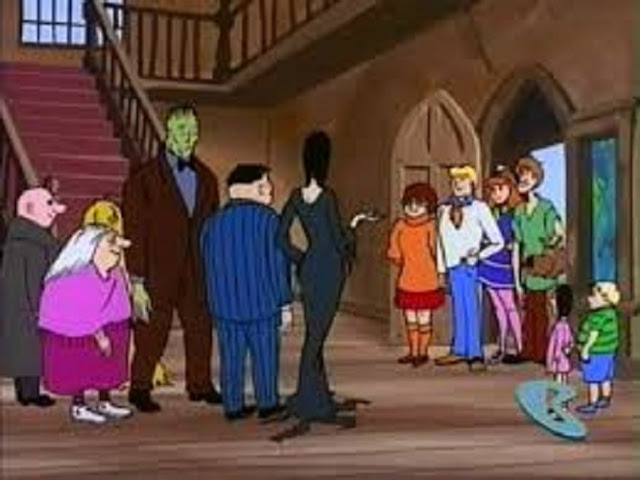 Again, there's no doubt that this third episode was the best of the series up to this point because it just has so many laughs and quite a bit of imagination. Unlike the earlier episodes, this one here makes good use of the supporting players as everyone in the Addams' clan is perfectly used. This is especially true for the terrific Lurch who is simply wonderful here and especially his introduction in the swamp. Both Gomez and Morticia are all extremely fun here as is Itt, Uncle Fester (voiced by Jackie Coogan) and Pugsley (voiced by Jodie Foster!!!). Scooby and Shaggy are also at the top of their game with some very funny moments throughout and especially the ones dealing with them constantly fainting when things get too scary.
[All summaries, descriptions, and critiques are from the IMDb.] 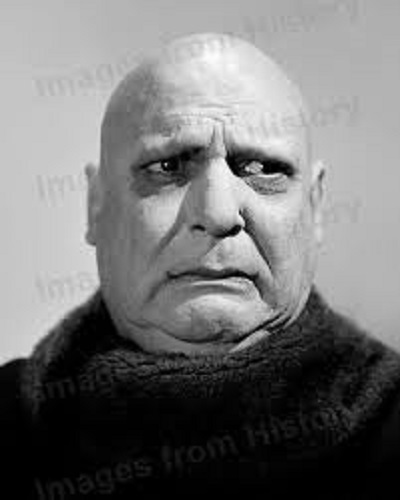 Welcome to the Hall, Uncle Fester!  I'm sure that comes as happy news! 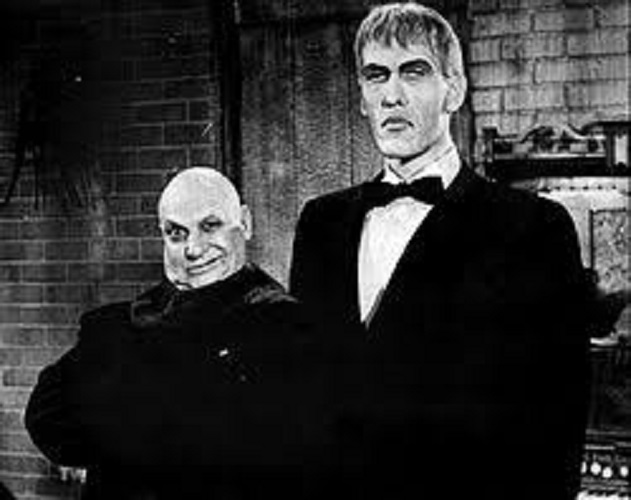 You’ll be joined by other members of your ooky family soon enough… knock on wood. 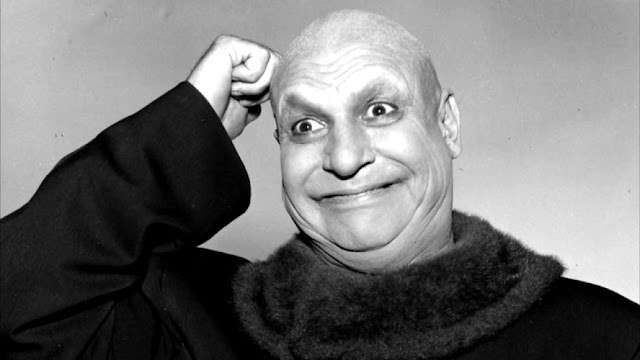