In continuing the tribute to Harvey Schmidt, here is one of the TV presentations of "The Fantasticks": 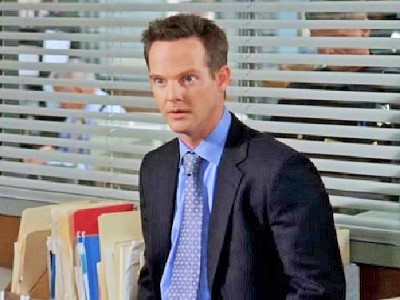 In San Francisco, Randall Disher was a lieutenant in the police department of the City by the Bay.  Meanwhile, across the country, Officer Eggars served on the police force of Eastwood, Connecticut (where he was being cuckolded by his boss, Chief Strong.) 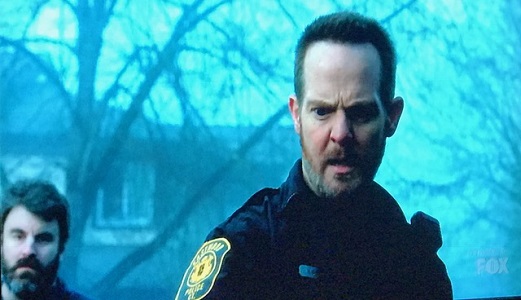 Despite the vast expanse of America separating them, both men looked exactly alike.  And both of them had gone into the same line of work - to protect and serve.  Disher and Eggars were not identical twins, but rather, identical cousins. 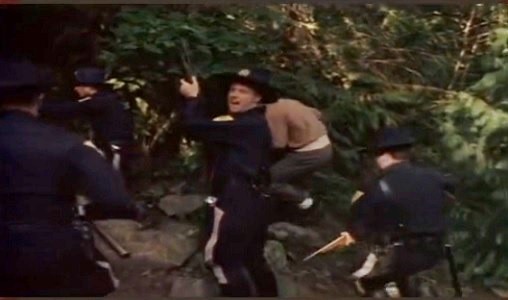 And the common factor was their grandfather, who was a state trooper in New Jersey back in 1947.  Their grandfather was on the hunt for a murderer who had killed a family in the Pine Barrens which folklore had tied into the legend of the Jersey Devil. 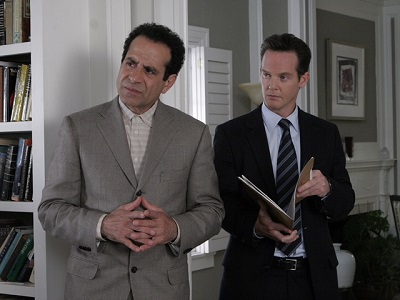 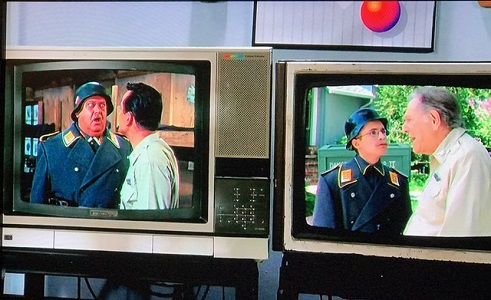 'THE GOLDBERGS'
"HOGAN IS MY GRANDFATHER"


From IMDB:
Adam's school project about Pops backfires while Beverly teaches an important lesson to Erica and Barry.

In order to keep Adam as his rapt audience, his grandfather started spinning fictional WWII stories about himself.  Rather than talking about how he was a clerk in charge of pants allocations, Pops cribbed the plotlines from the sitcom 'Hogan's Heroes' and made those stories about himself.

You might find this hard to believe, but this isn't a Zonk.  'Hogan's Heroes' is an historical fact in Toobworld - a top secret spy operation in a prisoner of war camp which was declassified after the war and a TV series was created from it.

The fact that it was done in jest is just an interpretation.

And the Toobworld TV show was similar to the Real World version in that they both hired the same actors to play the roles of the real historical figures, as seen in the screencaps displayed here. 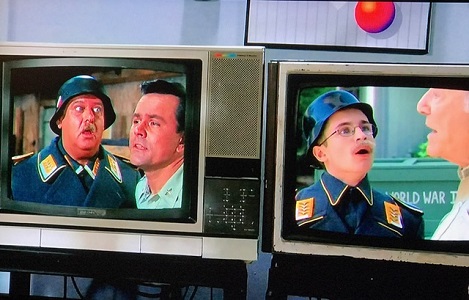 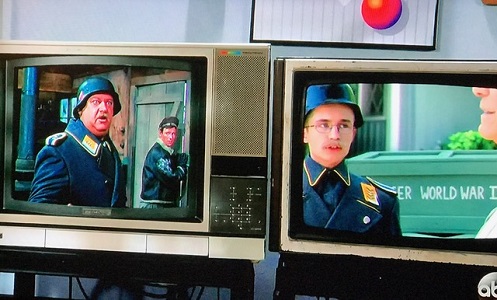 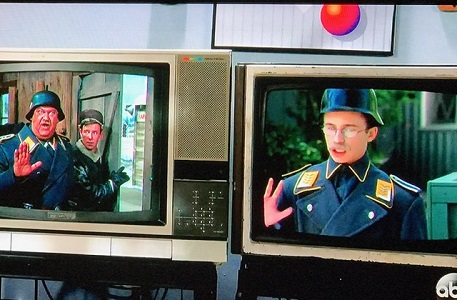 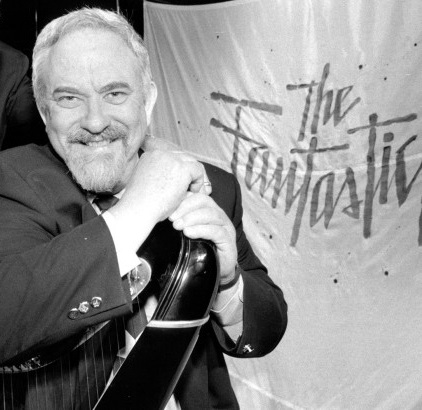 From the Los Angeles Times:
Harvey Schmidt, the composer of "The Fantasticks," which debuted when Eisenhower was still president and became the longest-running musical in history, has died. He was 88.

His death was confirmed by Dan Demello, a publicist for the off-Broadway show.

Schmidt teamed up with lyricist, director and storywriter Tom Jones on "The Fantasticks" as well as the Broadway shows "110 in the Shade" and "I Do! I Do!" Both men were inducted into the American Theater Hall of Fame in 1998.

"Try to Remember," the best-known song of "The Fantasticks," has been recorded by hundreds of artists over the decades, including Ed Ames, Harry Belafonte, Barbra Streisand and Placido Domingo. "Soon It's Gonna Rain" and "They Were You" are also among the musical's most recognized songs.

Most of the time when songs are used in TV shows, it is solely for the benefit of the audience watching at home in the Trueniverse.  The characters in Toobworld can't hear it.  Exceptions would be those shows in which characters would actually sing them, and of course their use in variety shows, talk shows, awards shows, etc.

"The Fantasticks" was presented twice on television and its score is a gold mine of songs that could be used in various shows to flavor a scene.  "Try To Remember" is probably the song that is most associated with the musical and is best known to the general public.

The following is a list of the shows in which Mr. Schmidt's music was used in Toobworld:

EARTH PRIME-TIME
The Adventures of Ozzie and Harriet

It's Garry Shandling's Show
- Sarah (1987)
(music: "My Cup Runneth Over")
Sung by Ed Ames as himself in the episode

(music: "I Can See It" - uncredited)
Sung by Tobias Funke & Argyle Austero in the episode


TV MOVIES
(not always part of Toobworld)
Getting Married in Buffalo Jump (TV Movie)
(writer: "Try to Remember" - uncredited)
From the cast album

VARIETY SPECIALS
(could be part of Toobworld)
Great Performances
- The Best of Broadway (1985) (writer: "Try To Remember")


For the first "Two for Tuesday" post of the month, we take a look at one of my new favorites (although it's been around since 2016) and how its remake can remain in the same dimension. 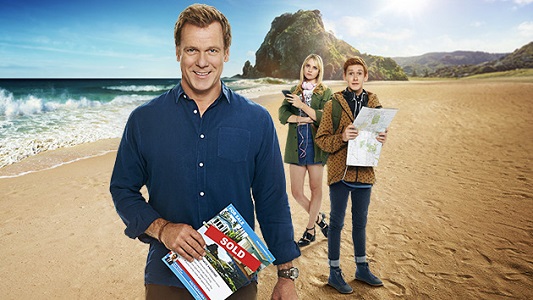 (In '800 Words',) Erik Thomson plays George Turner, a recent widower who quits his job as a popular 800 word columnist for a top selling Sydney newspaper. Over the internet he buys a house on an impulse in a fictional New Zealand remote seaside town called Weld. He then has to break the news to his two teenage kids, Shay and Arlo (Melina Vidler and Benson Jack Anthony), who just lost their mother, and now face an even more uncertain future. But the colourful and inquisitive locals ensure Turner's dream of a fresh start does not go exactly to plan. 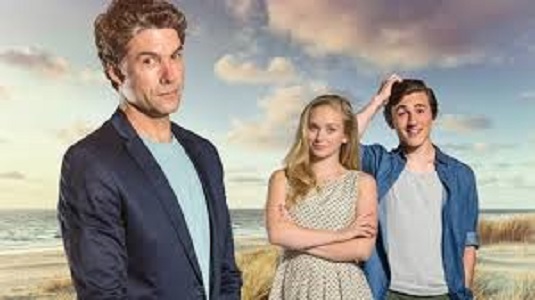 On 8 January 2018, 'Zomer in Zeeland' (translated: 'Summer in Zeeland') premiered on the Dutch channel SBS6. The show stars Daniël Boissevain as Sjors Mulder, Pip Pellens as his daughter Fenna Mulder and Tonko Bossen as his son Jurgen Mulder. The remake changes the setting to the Dutch province Zeeland, but follows the same storyline. Ironically, the country of New Zealand, where the original takes place, was named after Zeeland.
Both shows can exist in the same TV dimension because unlike the remake of 'Shameless', the names of the characters were all changed, and just as importantly, so were the locations.  It doesn't matter that the story lines remained the same because Toobworld has seen plot lines repeated - sometimes even in the same show!

Labels: As Seen On TV, By Any Other Name, Game of the Name, La Triviata, Life During Prime-Time, Location Shot, Wikipediaphile, World Toob


Team Toobworld knows how much I love coming up with theoretical connections between TV series, usually in the form of theories of relateeveety.  But every so often I find links within one series.

Most of those times, it was deliberate.  For example, the callbacks to past episodes.  As this will eventually be about 'Columbo', the big example would be the Lieutenant's many references to the Nelson Haywood case in which the Senatorial candidate killed his manager in "Candidate For Crime". 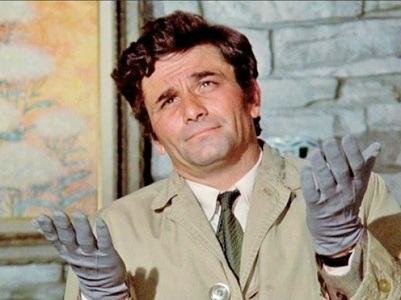 So this one will connect two episodes of 'Columbo' but it is theoretical, something I doubt has occurred to anybody else.

Here are the two episodes involved:

NBC's "A STITCH IN CRIME"
ABC's "AGENDA FOR MURDER" 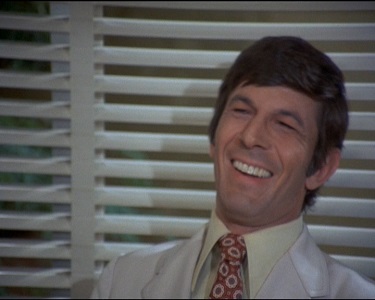 In the first one, the murderer was Dr. Barry Mayfield, played by Leonard Nimoy.  Mayfield was a brilliant surgeon and research scientist who was planning to cause his senior partner's death through corrective surgery for his arterial disease.  But his intended victim survived, although two other people were murdered by Mayfield in his attempt to cover up his premeditated murder attempt.

The connection to "Agenda For Murder" may be a trivial one, but for me it's a fun link and making me happy is ultimately what is important.

In that later episode had political strategist Oscar Finch murdering the one man who could derail Governor Montgomery's bid to be President.  (Whether or not that was the reason, Owen Marshall's identical cousin ended up not even getting the nomination from his party.) 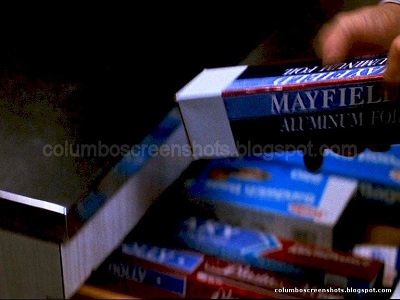 In plotting out the murder, Finch used aluminum foil to hold the used gun powder which he was going to put on the hand of the man whom he was going to kill, making it look like a suicide.

As you can see from this screen grab, the brand name for the aluminum foil he used was "Mayfield".

I floated this idea in the Columbo TV Facebook page yesterday and decided to flesh it out. 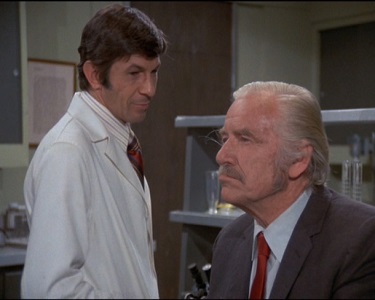 Barry Mayfield's college career and medical school were all paid with money from the family fortune which had been amassed to their holdings in the aluminum industry.  Mayfield Aluminum was probably founded by his great-grandfather in the late 1800s, but it was under his grandfather's stewardship in the 1920s when they went into full production using new techniques. 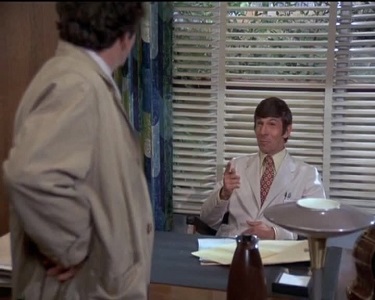 But the family's wealth and power didn't help him in avoiding punishment for his crimes, however.  For murdering Sharon Martin and Harry Alexander, I believe Dr. Mayfield was sentenced to two consecutive life terms and died in prison.  He may have been a model prisoner, serving in the medical wing, but he was never going to see a pardon. 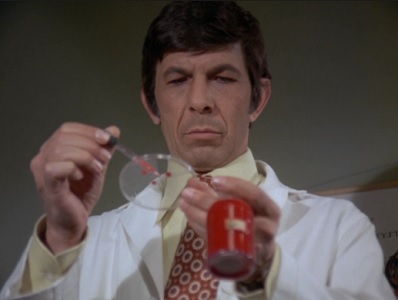 I may be alone in that judgement.  The Ultimate Columbo Site thinks the case was dismissed due to insufficient evidence.

So there you are - an inner link connecting two episodes of 'Columbo'.