It's time for our Saturday morning cartoon segment......

'TINY TOON ADVENTURES'
"NO TOON IS AN ISLAND" 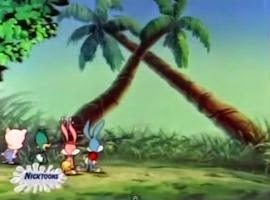 'THE SIMPSONS'
"HOMER THE VIGILANTE"

In this episode of 'The Simpsons', the Springfielders were told that the treasure was under a "big T"....... 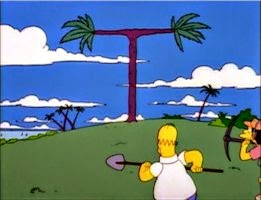 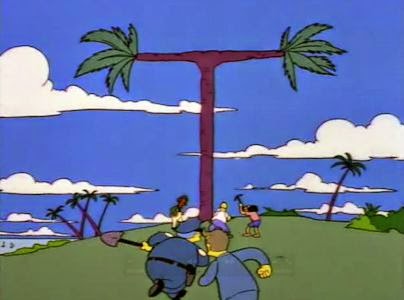 Also, at least two of the treasure hunters resembled their movie counterparts.  Here we see the "Tooniversions" of Benjy Benjamin and Otto Meyer standing behind Chief Wiggums..... 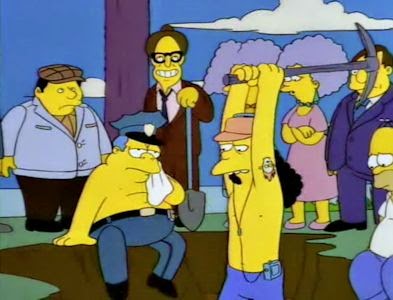 With all of the globe-trotting that Simon Templar must do, after a while the whole world must start blending together as one.  And that feeling must be compounded when so many of the places he visits look exactly the same: 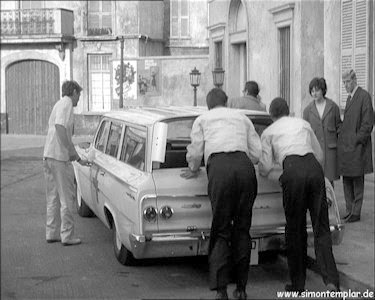 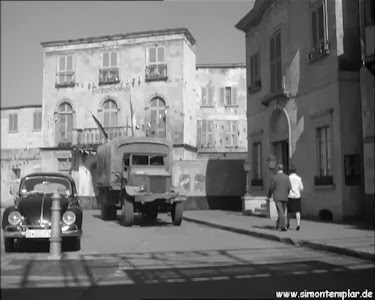 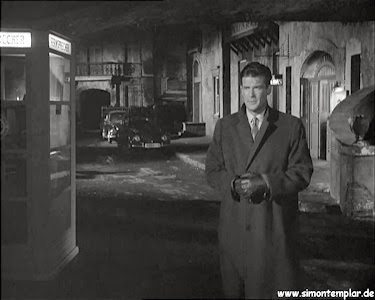 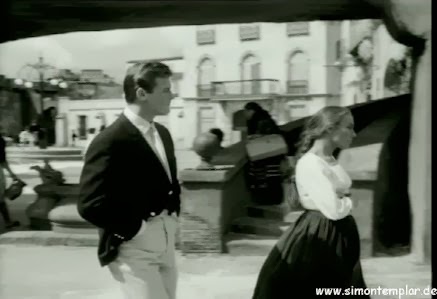 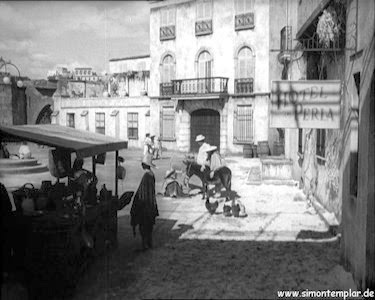 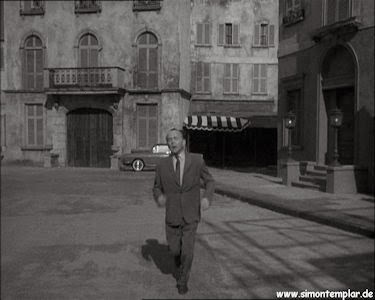 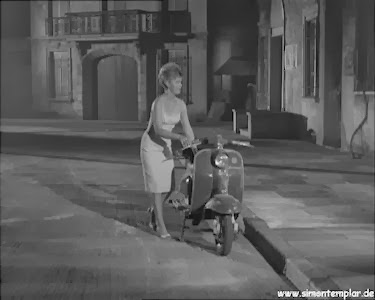 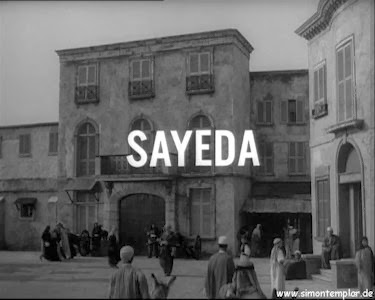 Most of those locations are in Europe, but that architect/urban planner also set up a couple of cities in Mexico to look exactly like the others.  And he did the same in the Arabic country of Sayeda.

What would drive him to do so?  Perhaps it was some sub-conscious command from the great Mother Computer known as Earth, as part of the programming designed by the super computer Deep Thought.

SHOW CITED:
'The Hitch-Hiker's Guide To The Galaxy'

My thanks to the Saint TV fanpage for the pictures. 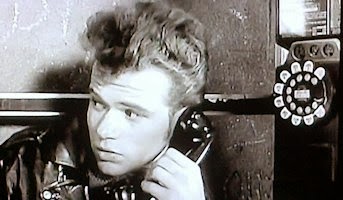 Marty Nero was a juvenile delinquent and member of a New York street gang.  He couldn't go through with an ordered execution of the rival gang member who gunned down Marty's friend LIttle Pancho, and because of that he became a target of his own gang.  But luckily, the police were able to arrive in time and rescue Marty.

It isn't known what happened to Marty later in his life.  Since he had not committed a crime and in fact tried to prevent a murder, Marty wasn't arrested.  And Lt. Muldoon offered to put in a good word for him with Mr. Cienzi, Marty's former boss in the garment district.

"Marty Nero" was not his real name, according to Toobworld Central.  Like all gang members, he had taken an alias.  But his nickname was based on his real name, the surname being "Martin".

Marty had an older brother named James Martin who walked the straight and narrow growing up.  He became a special agent for the government who got involved with secret agent Amos Burke during a very special case in 1965:

A peace group planned on stealing an LSD gas to use on the populace of Washington, DC, in order to cover their plans to steal military secrets.  It was Amos Burke's plan to infiltrate the group.

However, it turned out that Special Agent James Martin wasn't the All-American Boy Scout he appeared to be.  He tried to arrest Burke after Amos  made contact with the real leaders of the peace group.  During their struggle, Burke accidentally shot Agent Martin and killed him, only to find out later that Martin was a double agent. 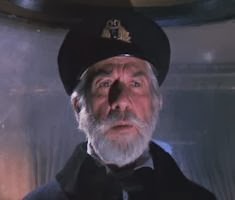 As for Marty's chosen surname of "Nemo", he picked it because Captain Nemo had been his favorite character when he was growing up.  And Marty may have imagined himself one day being the captain of the gang.

Marty had no clue that Nemo wasn't fictional, but instead that he not only was a nautical and scientific genius back in the 1850's to rival Dr. Loveless, but that he was still alive (although trapped in suspended animation undersea in the Nautilus.)

"It's A Mad, Mad, Mad, Mad World" was definitely a movie in the TV Universe.  And there were at least three mentions of it by TV characters to establish this fact:

'Remington Steele'
"Steele Among the Living"
Mentioned in the dialogue.

'Remington Steele'
"Steele in the Chips"
Steele remarks how their pursuit of cookies is similar to the pursuit for an object in this film.

'Mad Men'
"The Good News"
The movie is one of the films that Don and Lane are contemplating seeing. 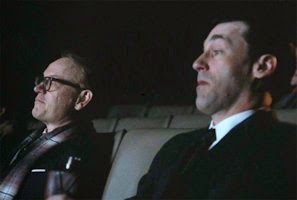 They ended up seeing a "Godzilla" movie....

HISTORY, CHANNELED: ONE YEAR AGO TODAY

During the Boston Marathon on April 15, 2013, two pressure cooker bombs exploded at 2:49 pm EDT, killing 3 people and injuring an estimated 264 others.

This act of terrorism happened one year ago today.  Because of the televised coverage of the marathon on ESPN, the tragedy entered the Toobworld Dynamic immediately.

But it would not be until August 27th, 2013 when the marathon bombing officially entered the History of Earth Prime-Time as a fixed point in Time.  That night it was mentioned by a bomb tech police investigator as a point of reference for a case he was working on.  It was sadly too easy for his audience to get the reference, since they were all working for the Boston Police Department.

As far as I can tell, there were no other references to the Bostom Marathon bombing in a fictional context before that.  (Since then I have heard it mentioned on 'Law & Order: SVU'.)

Labels: Life During Prime-Time, O'Bservations, Outside the Box, TV timeline, Twipped from the Headlines

THE "SIMON & SIMON" EPISODE THAT WAS... AND THEN WASN'T

'SIMON & SIMON'
"EMERALDS ARE NOT A GIRL'S BEST FRIEND"

This episode marked the first part of a crossover with "Emeralds Are Not a Girl's Best Friend", an episode of 'Simon & Simon' which was broadcast immediately following this program.

In that episode, the Simon Brothers, with Higgins tagging along, trail con artist Catherine Hailey to the South American country of Costa Nueva, in order to retrieve the money stolen from an orphanage charity of Robin Masters'. 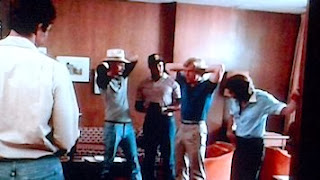 When it came time to present the 'Magnum P.I.' episode in syndication, a new ending was shot so that it remained self-contained.  Catherine Hailey was caught at the airport before her plane could take off.

I am not sure what contingency measures were taken for the 'Simon & Simon' episode in syndication - it might not even be available in that format! - which would have an impact on how this story turns out.....

But as it stands now, subject to revision here is how it plays out for the Toobworld Dynamic:

The original crossover is the official storyline for Earth Prime-Time.  However, at many points in the timeline of Toobworld, there have been many alterations to History - both large and small.  Shows from 'Doctor Who', 'Primeval', 'Quantum Leap', 'Seven Days', etc. have made changes to how History has played out. 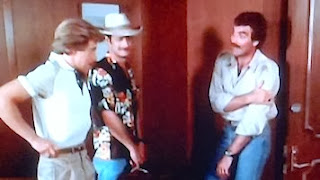 With any one of them, a temporal ripple, no matter how small, could have altered the events of this crossover.

Originally, Catherine got away by bribing a woman to pose as her on the plane to L.A.  So that when the FBI was waiting for her at the airport, they got the wrong woman.  And Higgins was held in custody instead.  From that point, the Simon Brothers, with Higgins tagging along, followed the real Catherine to Costa Nueva and hatched a scheme to get her out of a country that had no extradition treaty with the USA.

And then the temporal alteration occurred.

Now, while Thomas Magnum was being beaten up by Catherine's bodyguard in the airport, Higgins faked a medical emergency to get the plane to remain on the runway.  He personally escorted Catherine Hailey off the plane and delivered her to the Honolulu police.

With Catherine in custody, the 'Simon & Simon' episode never happened.  But only in the new Toobworld created by that temporal quirk.

So that means this second meeting between the casts of 'Magnum P.I.' and 'Simon & Simon' did not occur: 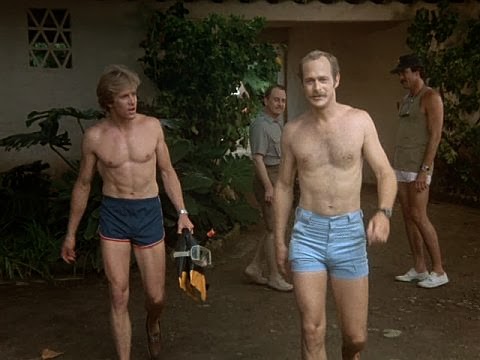 THE CASE OF THE ALTERNATE TOOBWORLD VS. THE CINEVERSE 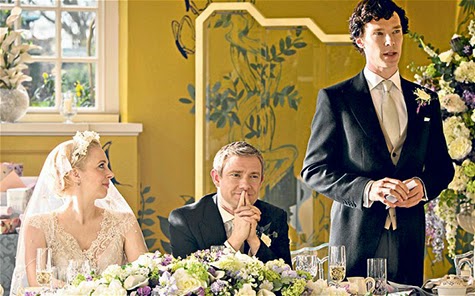 Sherlock Holmes:
“John’s great too. Haven’t said that enough.  Barely scratched the surface.
I could go on all night about the depth and complexity of his jumpers.
And he can cook. Does, uh this thing. Thing with peas. Once.
Might not be peas.
Might not be him."
'SHERLOCK'
"A SIGN OF THREE"
Might be a different John Watson.....