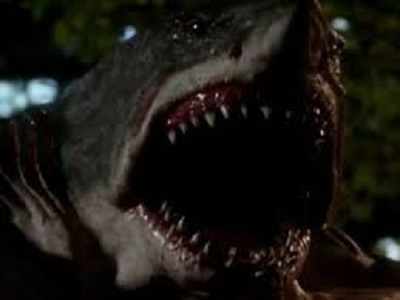 'The Flash' (the latest incarnation in the Television Multiverse) is certainly not suffering from a sophomore slump. After a great first season in which Barry Allen explored his new powers, tangled with the Reverse Flash, added new members to his Rogues Gallery, and dabbled in time travel, the series didn't waste any time in jumping into a new, major story arc - the Multiverse.

So far, we've had the classic tale of Flash meeting his Earth-2 counterpart Jay Garrick, which culminated with the iconic recreation of the cover illustration for "Flash Of Two Worlds". And plenty of new recipients for Cisco's catchy code-names have been crossing over from that world as well - Atom Smasher, Sand Demon, Tokamak, and a young female Dr. Light (who does exist in the comic books, but I preferred the original Michael Rennie clone.)

But the best of all had to be the minute long (at most?) appearance by King Shark, whose appearance was probably just to set up the introduction of the Harrison Welles from Earth-2. 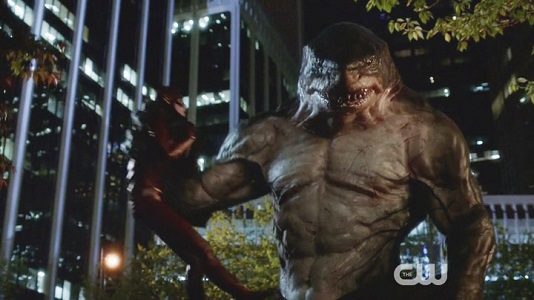 ﻿
I don't know if Welles killed King Shark in order to save the Flash, or merely stunned him, but it was an incredible CGI display on a television budget just for that quick scene. I'm hoping we get to see him again.

It also made me wonder if King Shark exists (existed?) in the main Toobworld. (This remake of 'The Flash' exists in Comic Book Toobworld.) He never showed up in the TV series from the early 1990s; very few of the Rogues Gallery did - maybe just the Trickster? But if King Shark does exist in Toobnworld, I wonder if his origin story would be the same as that to be found in the comics. I know I don't adhere to all of the origin stories for various comic book characters - the Joker, for example. (And I'm talking about the Clown Prince of Crime from the 1966 'Batman', not from 'Gotham.' I think mine is better, from a strictly TV POV, with references to 'Get Smart' and 'The Man From UNCLE'.) And definitely the writers for the various comic book-inspired TV shows don't either. (Just check out this season's 'Flash' episode "The Fury of Firestorm' and then match it to the DC Comics database file on Tokamak.)

So with King Shark, perhaps he's an evolutionary descendant of some kind of Mega-Shark from the age of the 'Dinosaurs!' - who knows? 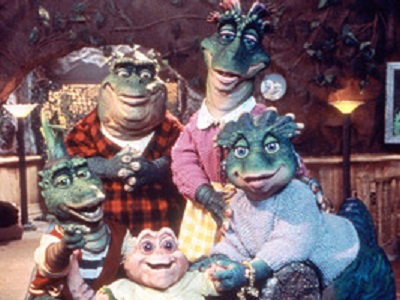 
For the Television Crossover Hall of Fame, November is the month when we induct someone who is a newsmaker - a politician, many times a former President of the United States, and sometimes even those who report the news (Walter Cronkite, Murphy Brown). 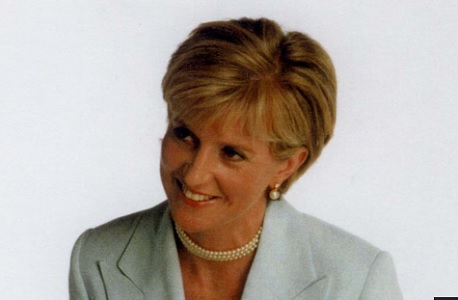 There have been many incarnations of "Princess Di" over the years since she died in that car accident.  Like JFK, Abe Lincoln, and Marilyn Monroe, there will likely be many more.  With so many different actresses playing the role in stand-alone projects like TV movies and mini-series, all of them can be dispatched to other TV dimensions; spread the love!

But the official portrayal of Princess Diana in the main Toobworld has her interacting with established TV characters in different TV series, and we've added a TV movie destined for an alternate dimension because all three appearances were of the same actress as Diana - Nicky Lilley. 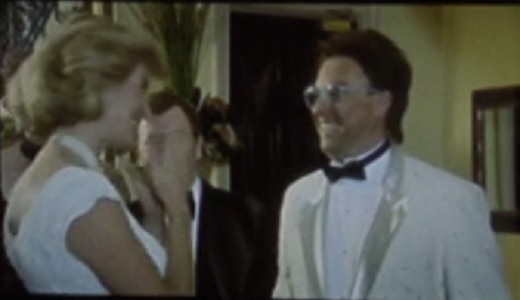 The first time she played the role was in a 2003 TV movie about "Prince William".  Because of so many recastaways of other real-life/historical figures in this dramatization of the life of Diana's oldest son.  This was followed by a video-taped flashback watched by Mike Spicer, a minor celebrity who once hosted a horrible game show.  He was presented to her at a charity event and this was the moment he was re-watching.

But the most bizarre appearance by Nicky Lilley as Princess Diana was in the second episode of 'Ashes To Ashes' in its first season.  It happened in the 1980s dream world of comatose shooting victim Detective Alex Drake so it wasn't really her.  But it was based on Alex's memories of the waking world, so it can be considered as "proof" that the Princess existed in Toobworld. 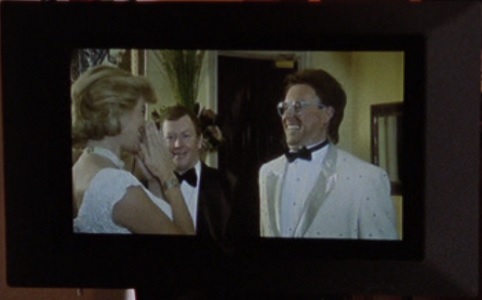 I don't know how much longer Nicky Lilley can pull off this acting impersonation of Princess Diana since the Royal has a finite shelf life for her appearance.  Ms. Lilley will hopefully have a long life ahead of her and she will continue to age.  (This was a problem faced by other Toobworld characters who should have remained frozen in Time like Lt. Commander Data, River Song, and George and Marian Kirby.)

So over ten years since she started portraying Princess Diana, it could be that Nicky Lilley may have already passed the shelf date for the role.

But one other reason why I wanted to make sure Ms. Lilley is the face of Princess Diana for the Television Crossover Hall Of Fame.  Although it could be considered exploitation of Di's memory to be playing the role in the first place, Ms. Lilley has shown that she had principles about protecting that memory.

Back in 1998, Kia Motors of Korea was planning to film a blipvert in which Princess Diana and Dodi Fayed would have been seen escaping safely from the paparazzi thanks to the Kia Sephia.  (This outcome would have established a pocket dimension with a different timeline than that of the real world and Toobworld.)

The tagline for the car (to be known as Mentor in the UK)?

"It's about time everyone had a well-made car."

Nicky Lilley was originally hired to play the role, but quit under protest because of the poor taste displayed in the commercial's storyline.   "The whole idea was sick," she said at the time. "It was like the crash wouldn't have happened if she had been in this car."

Following Ms. Lilley's objections, the production company for the blipvert changed the storyline.

And that's why it will be Nicky Lilley as Princess Diana in the Hall......

TV ON TV - A "VICIOUS" INVOLVEMENT IN "DOWNTON ABBEY" 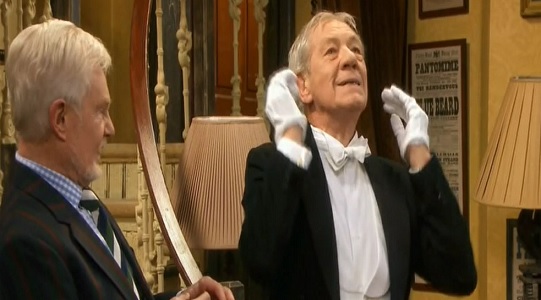 Freddie Thornhill:
Why do I have to be the butler?

Stuart Bixby:
Well, you're the one who pinched the costume...
From when you were on 'Downton Abbey'.

Freddie Thornhill:
They gave it to me!
'Vicious'

The casting of Freddie Thornhill as a butler in the Toobworld 'Downton Abbey' TV show is a good sign that it is a different looking TV show from the one we see.  As happens with "televersions" of historical figures as seen in our TV productions, they don't always look like the actual persons portrayed.  (Richard Crenna as Ross Perot, anyone?)  And such would be the case with whichever butler was played by Freddie Thornhill.

And I think I knew who he was playing.  Freddie only made a guest appearance on the program, so he would not have been a member of the regular cast of servants at the Abbey.  (And most of those were younger men.  Carson was the only one of an approximate age to how Freddie looked, but again, he was a major character.) 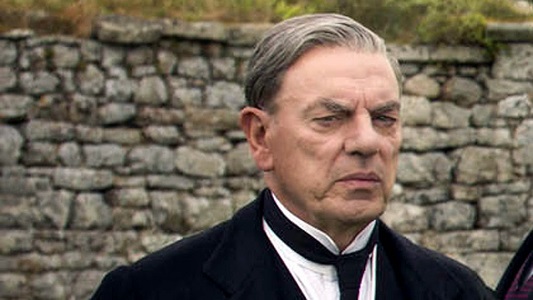 Instead, I think Freddie was playing Stowell as seen in the "Moorland Holiday" episode of 'Downton Abbey'.  He was the butler to the Aldridge family and sometimes he was insolent to Lord Sinderby, probably because of his employer's Jewish heritage. 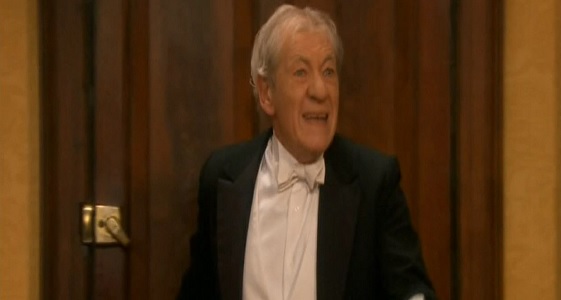 Freddie looks nothing like the historical Stowell and he was certainly older than the butler was in 1924.  (Freddie was almost a decade older when he played the role.)  But it's the only role of some meat to it which could have fit the aging, self-centered thespian. 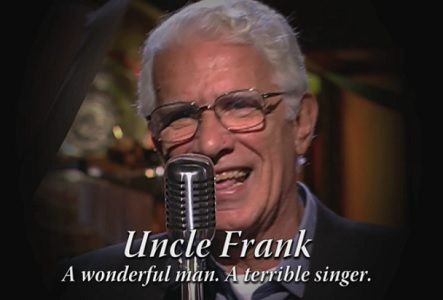 From Wikipedia:
Francis "Frank" Potenza (November 11, 1933 – August 23, 2011) was an American retired police officer for the New York City Police Department and former security guard. He later became a television actor for the late night show, 'Jimmy Kimmel Live!'. He appeared as Jimmy Kimmel's "Uncle Frank" on the ABC show as a regular from 2003 until the year of his death, 2011.

To remember "Uncle Frank" on his birthday, i hope you enjoy these video tributes suggested by my friend and co-worker Anthony Perroncino......


Today is also Veterans' Day.  Uncle Frank served in the military during the Korean Conflict, so he is also our showcase for the annual Veteran of Toobworld.

TUESDAY NEWS DAY - ACROSS THE CINEVERSE 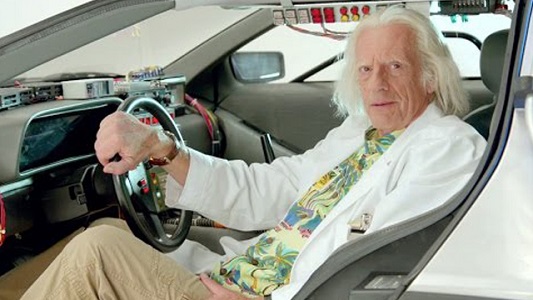 DOC BROWN
in
the teaser trailer

Robert Zemeckis has directed a short movie to add to the 30th anniversary edition of the "The Back To The Future" trilogy.  It's going to address the discrepancies which were promised in the second movie but which were never delivered, now that its online date has come and gone.

This is relevant for the Toobworld Dynamic because the movies have been absorbed into the TV Universe, thanks to the appearances of Doc Brown and Marty McFly in TV commercials and a TV series."Doc Brown Saves the World" will once again star Christopher Lloyd as Emmett Brown. In the story, Doc Brown embarks on a mission to save the world from a nuclear holocaust in 2045 by preventing certain technologies like the hoverboard and Mr. Fusion from being created.  I'm assuming he'll also make sure that the movie "Jaws 19" and flying cars won't come to pass either.  (Pepsi did bring out a limited edition of Pepsi Perfect for the anniversary and Nike will have the self-tying sneakers available by next year.  Maybe Doc Brown's actions will cause that delay.)

Once the short film makes its debut, those discrepancies between the Cineverse and the real world will be reconciled.BCnU! 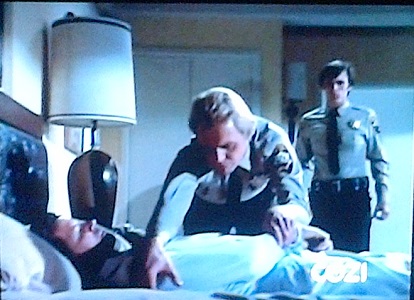 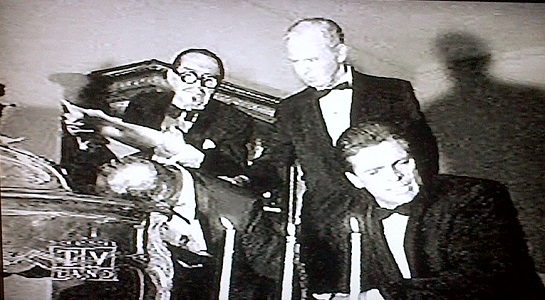 Earlier this year, I wrote about a court officer in San Francisco who killed a juror on a case back in the 1970s and tried to make it look like he had discovered the body already dead.  His inspiration was a case from the 1960s in which the same thing happened at a meeting of the world's greatest detectives. 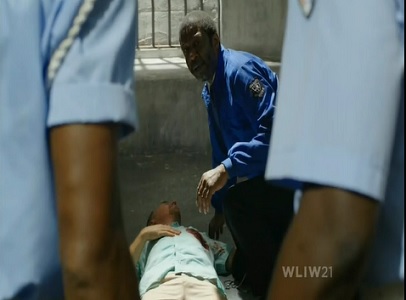 About forty years later, that second murder was added into the accounts of the murder at the "Super Sleuth" convention and how the latter inspired the former.  And a court officer in Honore, St. Marie, named Erol Dumas learned of both those cases this past year and decided to adapt it for his own scheme in killing the man who was responsible for the murder of Erol's lover.  But once again, the scheme was foiled by the local police.