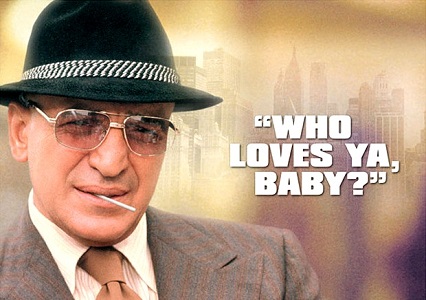 "Kojak is sexier
than Cannon and Barnaby Jones put together."
Marge Simpson
‘The Simpsons’
Today marks the 100th anniversary of the birth of Telly Savalas.  There are so many movies and TV show episodes for which he will be remembered (perhaps chief among them in both categories are “The Dirty Dozen” and “Living Doll”, an episode of ‘The Twilight Zone’, respectively.)  But I doubt there could be any argument that the detective series ‘Kojak’ is the pinnacle of his career. 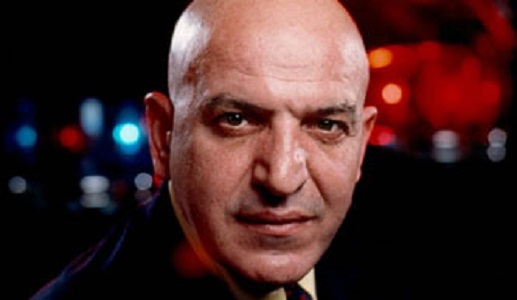 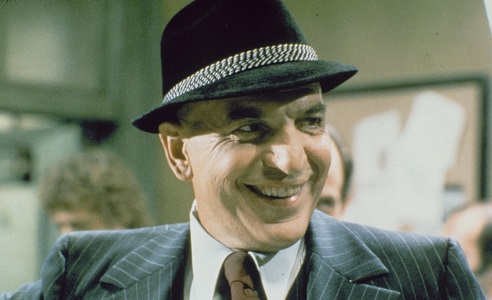 The show revolved around the efforts of the tough and incorruptible Lieutenant Theodore ("Theo") Kojak (Telly Savalas), a bald, dapper, New York City policeman, who was fond of Tootsie Roll Pops and of using the catchphrases, "Who loves ya, baby?" and "Cootchie-coo!" Kojak was stubborn and tenacious in his investigation of crimes—and also displayed a dark, cynical wit, along with a tendency to bend the rules if it brought a criminal to justice. He frequently ribbed his subordinates, especially the rotund Stavros, whom he referred to as "Fatso". Foot chase scenes involving Stavros also brought on the same type of physical humor. However, Kojak was especially abusive toward criminals, often stretching the truth: in one case Kojak said he witnessed them do something he did not actually witness (setting a bomb) to get them to talk. Kojak was so abusive, Mad magazine carried a TV satire titled, "Kojerk".In the context of the script, Kojak's was seen as typical squad room humor, which would be picked up later in the TV drama ‘Hill Street Blues’. Savalas described Kojak as a "basically honest character, tough but with feelings—the kind of guy who might kick a hooker in the tail if he had to, but they'd understand each other because maybe they grew up on the same kind of block."  Kojak's Greek American heritage, shared by actor Savalas, was featured prominently in the series. In the early episodes of the series, he is often seen smoking cigarettes. Following the 1964 Surgeon General's Report on smoking, cigarette commercials were banned from American television in 1971, and public awareness of the dangers of cigarette smoking increased dramatically during the 1970s.To cut down on his own habit, Kojak began using lollipops as a substitute. The lollipop made its debut in the Season 1 episode "Dark Sunday", broadcast on December 12, 1973; Kojak lights a cigarette as he begins questioning a witness, but thinks better of it and sticks a lollipop (specifically, a Tootsie Pop) in his mouth instead. Later in the episode, Kevin Dobson's character Crocker asks about the lollipop and Kojak replies, "I'm looking to close the generation gap." Although Kojak continued to smoke, as he was frequently seen lighting a cigarillo, the lollipop eventually became his identifying characteristic; in fact, when the series debuted a new opening montage in season five, Kojak is seen both lighting a cigarillo and popping a lollipop into his mouth.‘Kojak’ came out during the wave of TV detectives who had some sort of gimmick – Barnaby Jones was old. Frank Cannon was fat.  Mike Longstreet was blind.  And Lt. Frank Columbo was rumpled. 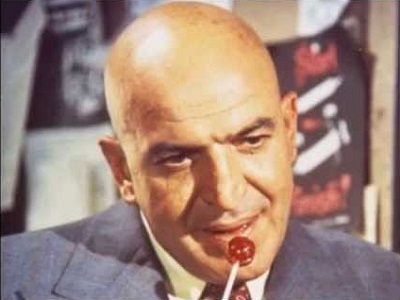 For Lt. Theo Kojak, his detective was bald.  Kojak was suave yet coarse.  And he always had a lollipop at hand.It’s no wonder that some TV producer (to be found only in Toobworld) decided to make a TV show about this brash NYPD cop.  As I always say, stealing and mangling Warhol’s famous saying – in Toobworld, everybody will have their own TV show.We’ve seen ‘Kojak’ playing on TV – but not technically in Toobworld.  It was playing on Sam Tyler’s TV in “Out Here In The Fields”, an episode of ‘Life On Mars’, the U.S. remake of the British series.Ladies and gents, it’s spoiler time!From Wikipedia:At the end of the series, it is revealed that Tyler's 2008 and 1973 realities were both fictitious, created by the onboard computer of a spacecraft that is carrying Tyler [and other crew members on a mission to Mars.]To sustain the crew, their minds were routinely kept active while asleep using virtual reality "neural stimulation" programs of their own choosing, but Sam's choice of a scenario - where he was a police officer c. 2008 - was abruptly changed to a 1973 setting by a computer glitch induced by a meteor-storm.
So in order to create that dreamscape, the computer had to draw on the memory banks full of information from back on Toobworld.  And that would include the televersion of the TV show ‘Kojak’, based on the “real” Toobworldling, Theo Kojak. 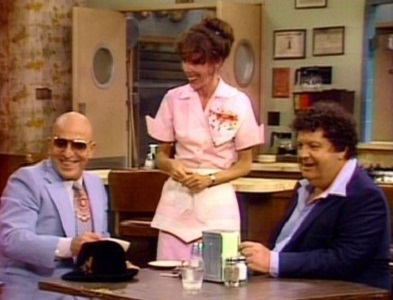 Of course, Theo Kojak in the TV show looks remarkably like the actor Telly Savalas who does have an official televersion.  As a member of the League of Themselves, Savalas was seen in “Has Anyone Here Seen Telly?” – an episode of ‘Alice’. (In the episode, nobody believes Vera when she tells them that Telly Savalas and his brother George – who was a co-star in the series – stopped in to Mel’s Diner.)

That Savalas and Kojak shared the same TV dimension was also confirmed by a Toobworldling named Balki Bartokomous.  In the ‘Perfect Strangers’ episode “Knock Knock, Who’s There?”, Balki asked "Does Telly Savalas love you, baby?“  As was the case with many of Balki’s bon mots, he was confusing the two men – the detective and the actor who played him. 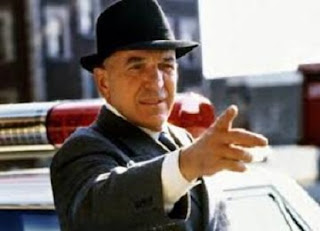 Here is a list of some TV shows from the Trueniverse which have mentioned ‘Kojak’: 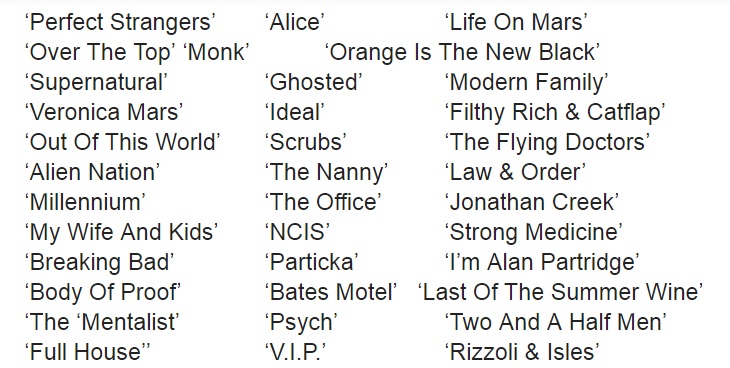 I’m sure there are plenty of other series out there which have mentioned ‘Kojak’.  In some of those references, Kojak is mentioned by name without any connection to the TV show.  Those are probably references to the actual detective in Toobworld.  The rest of the citations would be for the TV show based on his life. 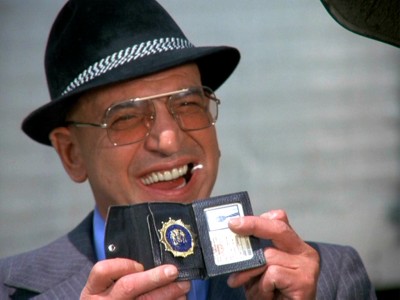 Therefore, looking at it from a televisiologist’s perspective, all of those shows which mentioned either the show or the detective confirm that he actually existed in their world.  Therefore… all of those TV series listed above are connected to the man himself either directly or indirectly.Not only that, but 'Kojak' is a TV program in alternate Toobworlds: (O’Bservation - Because the NYC Mayors differ from Earth Prime and Earth Prime-Time, 'Castle' might exist in the same Toobworld as ‘The West Wing’.) (O’Bservation – Despite the wildly different artistic styles and storylines, ‘BoJack Horseman’ and ‘The Simpsons’ share the same Borderland – The Tooniverse, along with all of the other animated series.) 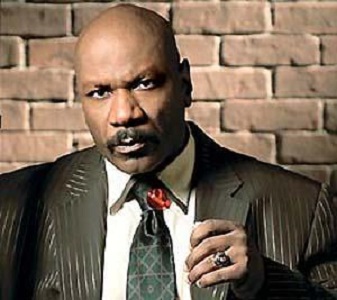 We also know that Lt. Kojak exists in an alternate Toobworld.  Ving Rhames played the bald detective in a reboot of the series.  As Mr. Rhames is black, Toobworld Central figured the best home for the show would be Black Toobworld which also houses the black versions of 'The Equalizer', 'The Odd Couple', 'Barefoot In The Park', 'Ironside', 'S.W.A.T.' and the movie adaptation of 'The Honeymooners.'

Finally, here are the TV shows and TV movies which are included in the official tally for Theo Kojak’s membership in the Hall of Fame: 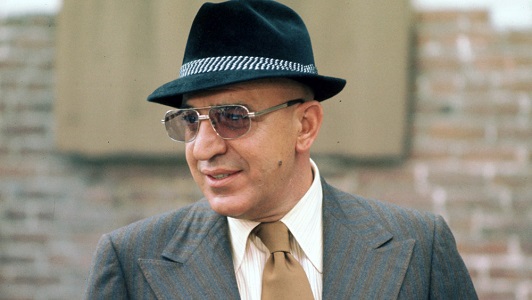 It’s a well-deserved honor for Theo Kojak.Who loves ya, Baby?Toobworld does!Welcome to the Hall, Lieutenant!

And happy birthday wherever you are....

You know what?  This crossover marks a special event - the 100th birthday of Telly Savalas.  And since we know he has a televersion, and we know that avatar of Savalas, that "Savatar", starred in the Toobworld TV show version of 'Kojak', then all those references to the show are also references to Telly Savalas as well. 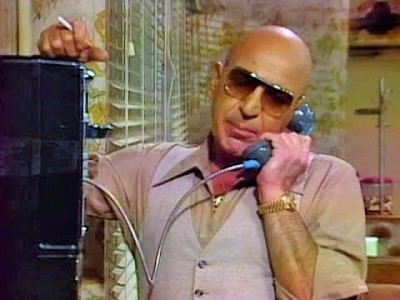 So even though Savalas only had one appearance as his own televersion, I'm counting all of those shows to qualify the actor for membership also.

I don't make such an allowance often, but how often do I get to mark the centennial of an actor like Telly Savalas?