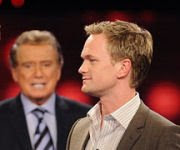 In the second episode of the next season of 'How I Met Your Mother', Regis Philbin will be appearing as himself. Apparently, the gang runs into the talk show host at a NYC burger place that means a lot to Marshall.

Because of this League of Themselves appearance, Regis can now be the link between 'How I Met Your Mother' and the following shows in which he also appeared as himself, but in a fictional setting (unlike his many game show/talk show credits):

"One Life to Live"

"Caroline in the City" - Caroline and the Sandwich

"Style and Substance" - A Recipe for Disaster

"Soul Man - Grabbed by an Angel

"The Fresh Prince of Bel-Air" - I, Stank Hole in One

"Women of the House" - Dear Diary

"The Larry Sanders Show" - Like No Business I Know

[Now, it could also be that Reege was appearing as himself in the episode "The Chaperone", also from 1994. He did an uncredited voice-over as the Miss America Pageant announcer, but I think Regis himself would have taken that gig....]

"Kung Fu: The Legend Continues" - May I Ride with You

"Mad About You" - The Man Who Said Hello

[His wife Joy Philbin appeared with him also in that episode.]

Regis also appeared as himself in other TV dimensions:

"Spin City"
- The Bone Collectors
- How to Bury a Millionaire
- Radio Daze
And in the Tooniverse, he connects these animated series:
"Lilo & Stitch: The Series" - Drowsy: Experiment #350

[Actually, in "Treehouse of Horror IX, Regis appeared live action, but a vortex in space brought him into contact with characters from the Tooniverse.]
"Family Guy" - Family Guy Viewer Mail #1
I think Regis qualifies for the mega-induction special for next year's anniversary of the TV Crossover Hall of Fame!

PS:
Note that picture with this post? I'm back at Toobworld Central, baby! No longer hobbled by dial-up! "Inner Toob" will resume with regular postings by tomorrow!
Posted by Toby O'B at 2:33 PM 0 comments

In a reverse from the 'Scooby Doo' story, plans for an animated version of 'Buffy The Vampire Slayer' may be revived. Years ago there were scripts written for such a project, and it would have been a combination of humor and action but minus the angst from the live action series.

The actress who supplied Buffy's voice for the video games would be doing the same for the cartoon. But Alyson Hannigan, Nicholas Brendon, and Anthony Stewart Head were ready to continue their roles in the Tooniverse.

It sounds like a project that the Cartoon Network should really chase after for its Adult Swim block, doesn't it?

If you want to see what the animated 'Buffy' would have looked like, check out this clip at YouTube:

The BBC will be making a new version of the Arthurian legend, but this time Merlin will be the same age as Arthur Pendragon. Merlin will be shown learning how to control his powers even as he helps Arthur to prepare for kingship.

Among the many actors to be in the production are John Hurt, Richard Wilson, and Michelle Ryan (but not as the 'Bionic Woman').

This tweaking of the established legend will place this new version of Merlin's story in an alternate dimension. I'm not sure which portrayal of Merlin should be considered canon in Toobworld, but I would think that since the mini-series starring Sam Neil would have the inside edge. Its coverage of Merlin's life was extensive and covered much of the material in the legends.

As for other portrayals of Merlin in episodes of TV shows, it could be said that the difference in his appearance from that of Sam Neil could be attributed to magic. If it's the whole legend that's portrayed in TV movies or mini-series, then most likely those versions are in alternate dimensions just like this new one.

When it comes to the many variations of Mark Twain's story about "The Connecticut Yankee In King Arthur's Court", it could be said that each version begins on Earth Prime-Time (including those with Dyan Cannon and Keshia Knight Pulliam), but by traveling back in Time each "Connecticut Yankee" creates an alternate dimension.

And as poor a sitcom as 'Mr. Merlin' was, I see no problem with Barnard Hughes' portrayal of Max Merlin to be a VERY much older Merlin once played by Sam Neil......

Scooby Doo and his human co-horts riding the Mystery Machine are long-time residents of the Tooniverse. And they've been integral in linking many other animated series and bringing real-life celebrities to animated life.

Those actors won't be involved in the next installment which will become part of Toobworld as a direct-to-TV/DVD movie to be shown on the Cartoon Network (even though it will be live action). Not that it matters, as this can stand alone as the representative for the TV Universe.

It's going to be a prequel called "Scooby Doo: In The Beginning" and will be about the Scooby Gang solving mysteries together for the first time (finding out who's been haunting their high school).

Jed Stone was last seen on 'Coronation Street' in 1966. He first appeared on the prime-time British soap opera in 1961 when he became Minnie Caldwell's lodger in Weathersfield. His nickname at the time was Sunny Jim. (The way Jed left the show in 1966 was due to his arrest for possession of stolen goods. In this case, blankets.)

Jed Stone was played by Kenneth Cope back then, and now - 42 years later - he'll be returning to ITV and 'Coronation Street'.

Jed Stone, played by actor Kenneth Cope, has returned to the ITV soap 42 years after he last appeared in the show. Now 77 (both the actor and the character, I'm assuming.), Jed Stone will be involved in a plot with Tony Gordon, a property developer in Weathersfield.

That 42 years between his appearances in Toobworld could very well be the longest span for a TV character in any show. The only other good example I can think of would be that of Alan Brady. Not counting that animated special, which belongs in the Tooniverse anyway, there were 29 years between his last appearance on 'The Dick Van Dyke Show' (which, as with Jed Stone, was in 1966) and his guest shot on an episode of 'Mad About You' in 1995. (Which, by the way, helped to get Alan Brady inducted into the TV Crossover Hall of Fame.)

Sorry about that, Chief....

The upcoming season of 'The L Word' is supposed to be the end for the series. Of course, in Toobworld, that doesn't mean the lives of those characters just stop... unless of course they die in the final episode.

But one character might actually have their life continue in full view of the faithful audience. Robert Greenblatt is the President of Entertainment for Showtime and he told TV critics that the executive producer of the show (Ilene Chaiken) is working on an open-ended storyline for one character so that a spin-off could be developed.

That spin-off would begin online, but if it proves successful then Showtime might bring it to their premium channel as a series.

No word on who the character would be that would get the spotlight, but they'll be 2/3rds of the way towards membership in the TV Crossover Hall of Fame!

Even though 'The L Word' is telecast on Showtime, which is a premium channel, they will be introducing product placement into the show with as much focus as has been given to Degree anti-perspirant in 'Eureka' and to Dunkin Donuts in 'Psych'.

For $300,000, brands could buy an "integration package" which would either incorporate that brand into an existing storyline of 'The L Word', or they could work with the writers and producers to get a customized storyline.

To me, this sounds like it's going to be as heavy-handed and obtrusive as those Dunkin Donuts and Degree mentions turned out to be on 'Psych' and 'Eureka' respectively.

Especially when you think of the basic subject matter of 'The L Word' - a group of friends, many of whom are lesbians - ya gotta wonder: what exactly could the product be that could be worked into a storyline?