Save for the behind the scenes talent who are inducted in September, I try to limit the League of Themselves inductees to March.  It's a pitiable month with only one decent holiday to it; and I thought it could be livened up a bit with its own theme for the Television Crossovers Hall of Fame.

But when it comes to THIS guy, what better month is there to induct the legendary…..

Best known as a film director, he is probably the most recognizable of movie directors of all Time.  And that was certainly fueled by his cameos in his own movies as well as hosting several TV anthology shows – one even after he was dead! 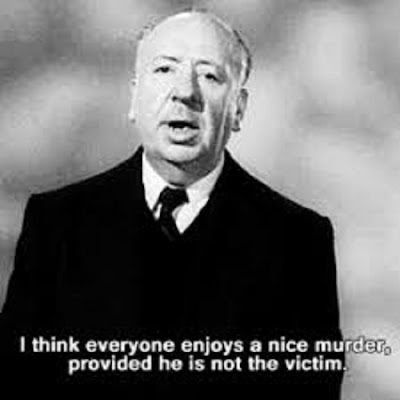 From Wikipedia:
Sir Alfred Joseph Hitchcock, KBE (13 August 1899 – 29 April 1980) was an English film director and producer, widely regarded as one of the most influential and extensively studied filmmakers in the history of cinema. Known as "the Master of Suspense", he directed over 50 feature films in a career spanning six decades, becoming as well known as any of his actors thanks to his many interviews, his cameo roles in most of his films, and his hosting and producing of the television anthology Alfred Hitchcock Presents (1955–1965). His films garnered a total of 46 Oscar nominations and six wins. 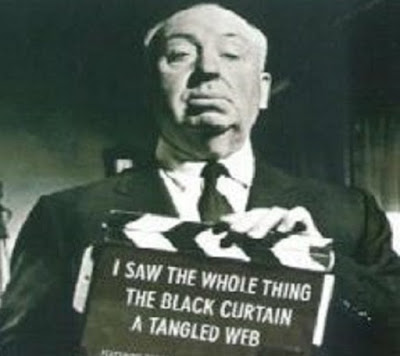 From 1955 to 1965, Hitchcock was the host of the television series Alfred Hitchcock Presents. With his droll delivery, gallows humour and iconic image, the series made Hitchcock a celebrity. The title-sequence of the show pictured a minimalist caricature of his profile (he drew it himself; it is composed of only nine strokes), which his real silhouette then filled. The series theme tune was "Funeral March of a Marionette" by the French composer Charles Gounod (1818–1893). 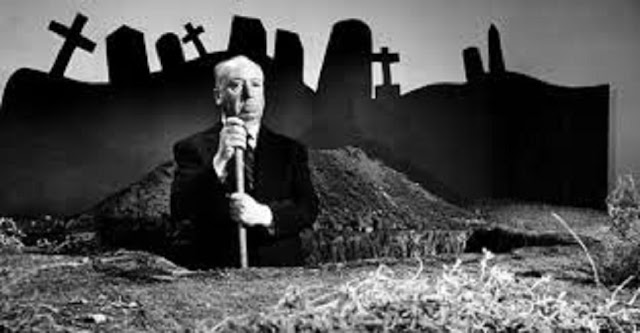 His introductions always included some sort of wry humour, such as the description of a recent multi-person execution hampered by having only one electric chair, while two are shown with a sign "Two chairs—no waiting!" 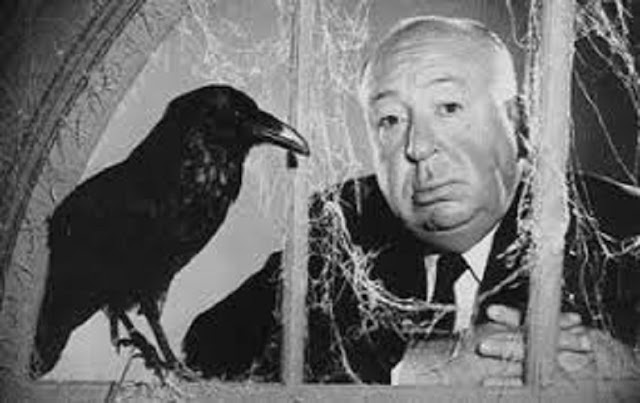 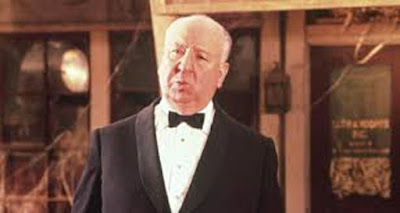 In the 1980s, a new version of 'Alfred Hitchcock Presents' was produced for television, making use of Hitchcock's original introductions in a colourised form.
Here are the credits which earned Hitch membership in the Hall: 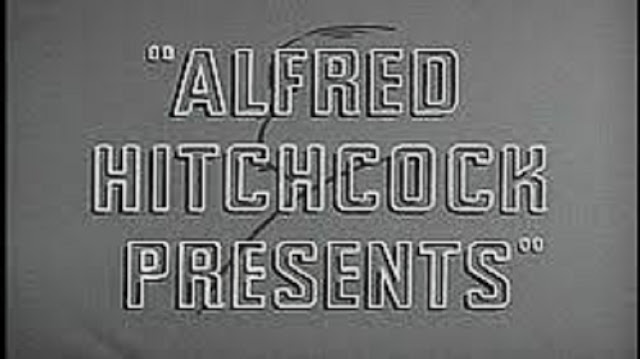 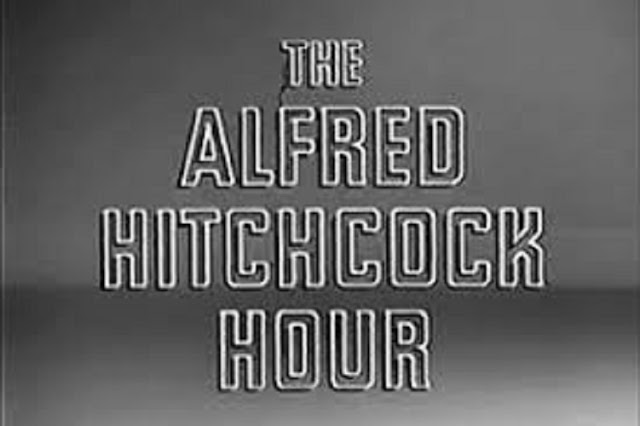 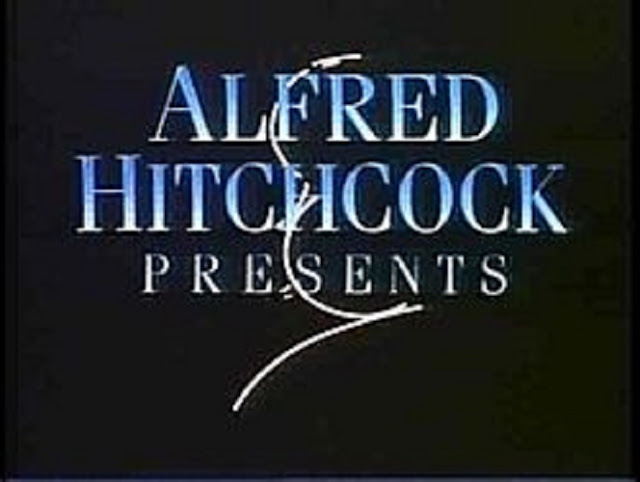 With that last one, again it was digital resuscitation like the 1985 coninuation of his series.  And since that ran for four years, I can’t see how it can be protested that he was brought back for a miniscule cameo.

Considering this occurred in ‘Tales From The Crypt’, I like to think that it was Hitchcock’s ghost we were seeing.

At any rate, welcome to the Hall, Sir Alfred!


I’ve been slacking off for the last few months in posting to the Inner Toob blog, but at least I’ve been keeping my hand in by continuing up the inductions into the Television Crossover Hall of Fame every Friday plus the monthly showcases.

It’s been twenty years for the TVXOHOF and about twenty-two years for the site in general which began as a website called “The Toobworld Dynamic” published via the late lamented AOLPress.

So, after all that time, yeah, I got burned out from the daily grind of posting every day.  (In the beginning it was several times a day!)

And let’s face it, all that time I had pretty much covered every aspect of the Television Universe.  I didn’t think there would be anything to spark my interest anymore.

But last night, something came along which fired up the tele-synapses. 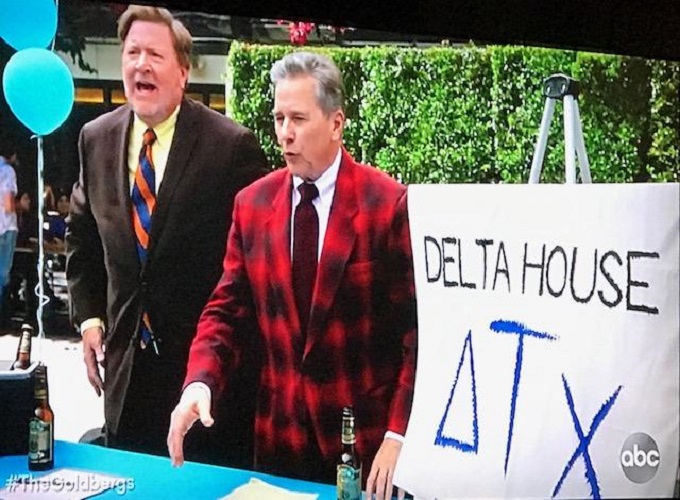 From the IMDb:
Barry decides to rush a fraternity, but it doesn't quite work out as he expects. 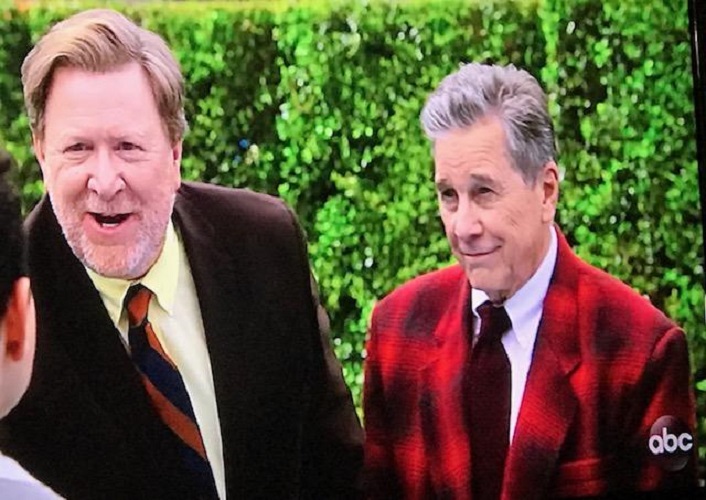 The one frat Barry wanted to get into was Beta Zeta, but they wanted nothing to do with him.  He was looking for a fraternity which would help him to recreate the adventures from the movie “National Lampoon’s Animal House”. 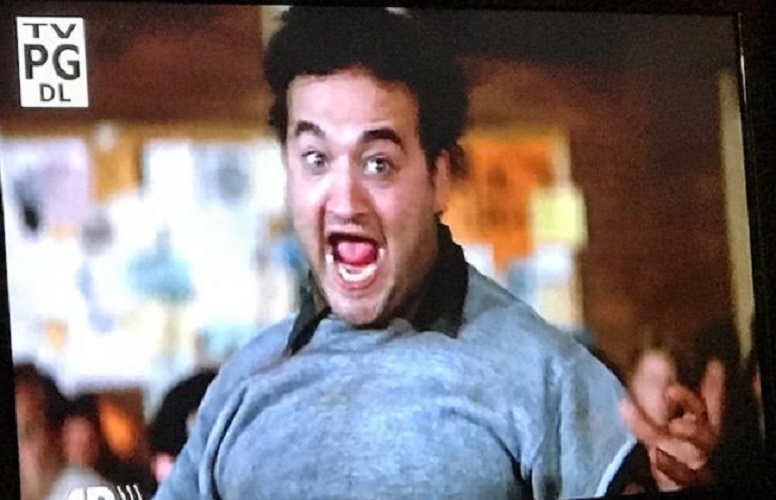 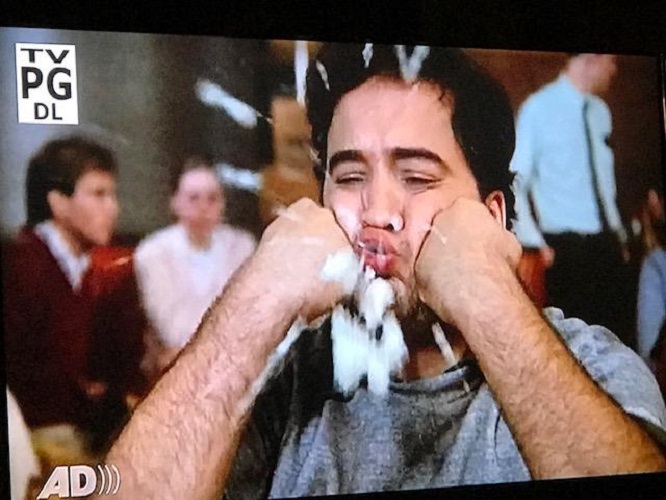 And he had a checklist – food fights, smashing beer cans against his head, riding a motorcycle into a crowded frat party, putting a dead horse in the dean’s office.  (Scenes from the movie were shown at the beginning of the episode.)

The thing is, Barry had the chance to join the actual Delta House, but he blew them off.  He failed to recognize Robert Hoover and Eric Stratton as they basically looked from the movie… albeit forty-one years later. 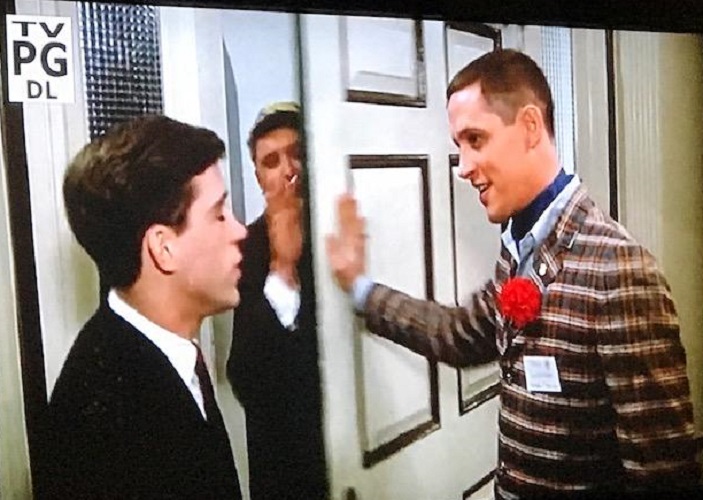 Within Toobworld, “National Lampoon’s Animal House” is well established as a movie.  Even when we leave out those shows which lifted quotes from it or aped specific moments like the toga party, going with those shows that mentioned it be name or showed the poster or the videotape or DVD, we’ve rounded up the usual suspects:

Even ‘The Goldbergs’ had referenced it in past episodes – in one, Adam wanted to rent the video.

So this might look like a Zonk, having characters from the movie appear as “real” people in Toobworld.  But Toobworld has provided for us! 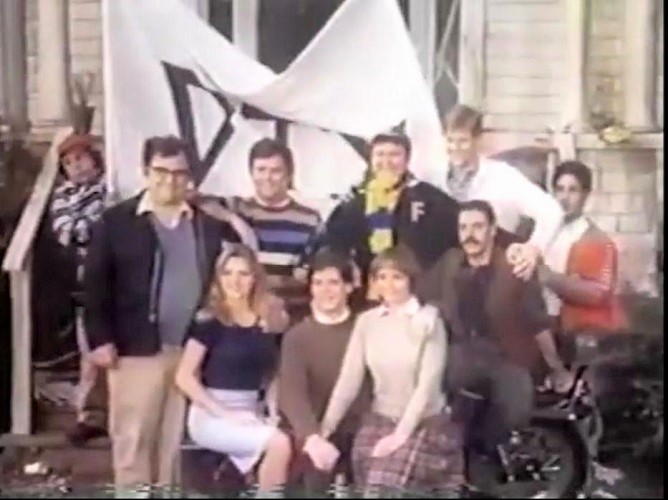 One year after the movie came out, a sitcom based on it aired on ABC.  It was called ‘Delta House’ and carried on the adventures of the frat boys at Faber College.  Because of censorship and a crappy time period (Saturday nights at 8 PM, Family Viewing Hour), the show only lasted thirteen weeks.

They at least had the benefit of being connected to the movie, whereas CBS and NBC rushed out TV shows “Inspired” by it – you know, rip-offs) ‘Co-Ed Fever’ and ‘Brothers and Sisters’ respectively.

Several in the cast recreated their roles from the movie: 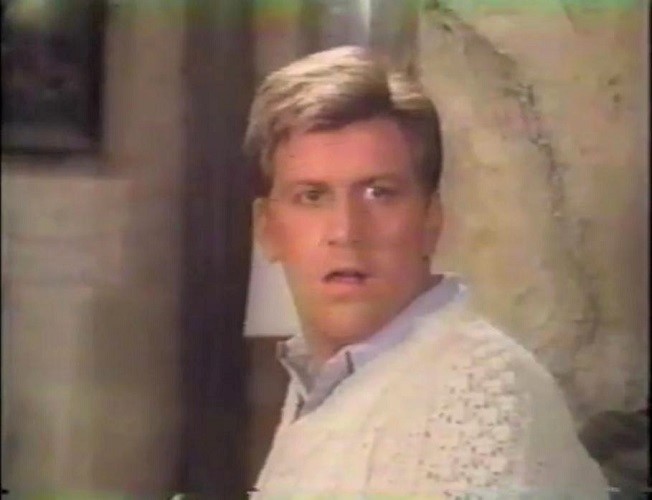 and
Other actors were found to replace the original actors in key roles, most of which were just plain recastaways: 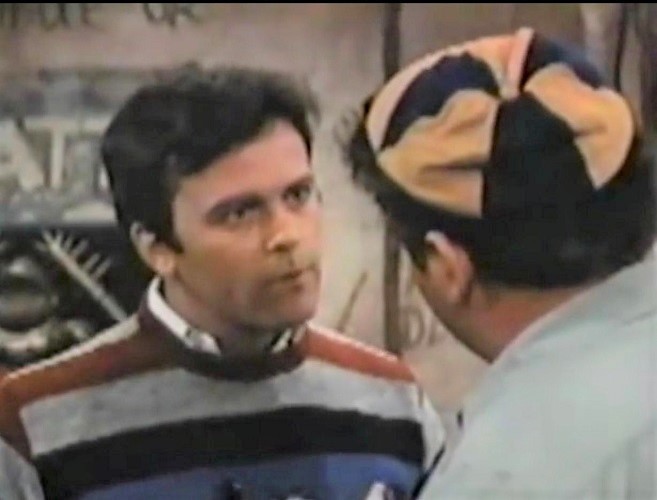 Eric Stratton of Toobworld
There was no way the producers could recast John Belushi as Bluto Blutarski.  Belushi was an indelible force of nature.  But they cleverly did the next thing – they cast Josh Mostel as Blotto Blutarski, Bluto’s brother.  (Bluto got drafted into the Army.)

So here’s the thing – “National Lampoon’s Animal House” was a movie in Toobworld.  But it was based on a “real life” event that happened at Faber College in 1962.  Barry Goldberg’s a bit thick and so couldn’t comprehend that he had come face to face with the actual Robert Hoover and Eric Stratton during the frat rush. 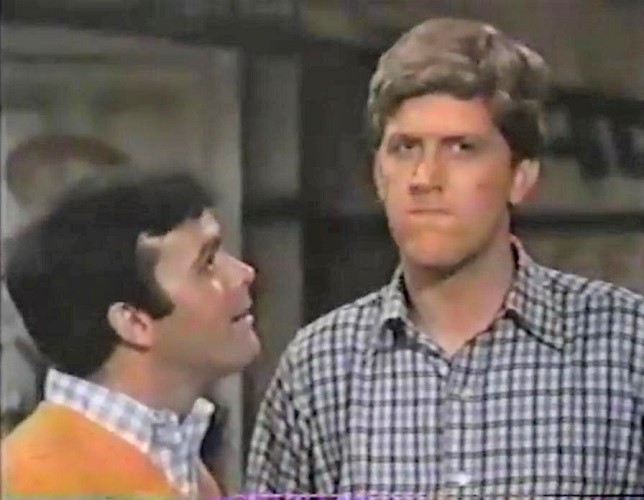 When John Landis and Universal were casting the actors to play the original students of Delta House, their casting department did an incredible job in finding actors who looked their inspirations.  But in taking ‘Delta House’ as real life, there were a few times in which the movie actors didn’t exactly look like the people they were playing.  The case in point as far as the ‘Goldbergs’ episode is concerned is Eric Stratton.

In making the movie sixteen years after the events at Faber College, Tim Matheson came reasonably close to looking like the real Eric Strattion.  (Remember, with the Toobworld Dynamic, we look at what happens on television as being the reality of the TV Universe.  So that WAS Eric Stratton in ‘Delta House’, not Peter Fox.)  And yet when we were reunited with the real Eric Stratton, he now looked like the actor who portrayed him in the movie (although older.) 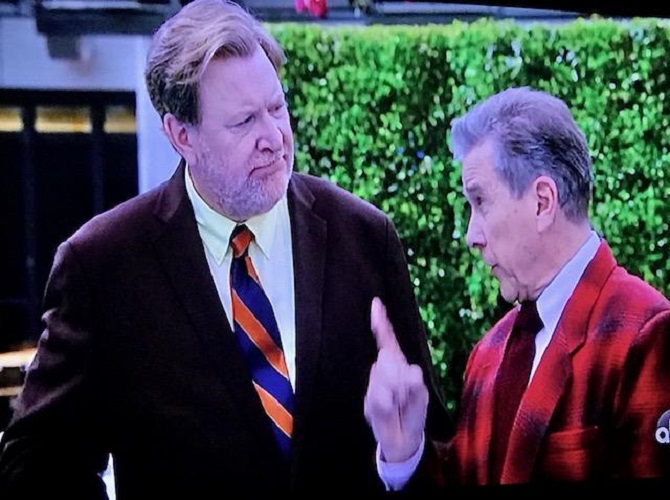 For this Zonk, there’s a splainin for that.  But first we have to look at something else which happened in the Real World because of the movie.

In a showcase role, DeWayne Jessie played the band leader of the Knights, Otis Day.  The band played at the Delta House toga party and the frat members later went to see Otis Day and the Knights play at a blacks-centric club, which led to an uncomfortable situation.

The singing was actually done by someone else and then Jessie lip-synched to that recording.  Years later, he bought the rights to the band name of Otis Day and the Knights from Universal and put together his own band.  Now going by the name of Otis Day, DeWayne Jessie too the group on tour and they recorded an album which of course was called “Shout”.  It included that number as well as “Shamma Lamma Ding Dong”, both featured in the movie. 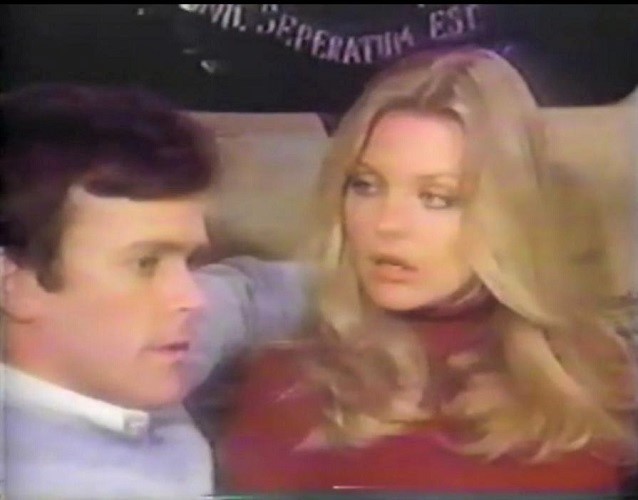 So using that as inspiration, the Eric Strattion of Earth Prime-Time – who once resembled actor Peter Fox of Earth Prime – decided to capitalize on his fame from the movie’s success and undertook plastic surgery to further his resemblance to the actor who played him in the film, Tim Matheson. Maybe he figured it would help his career as a Beverly Hills doctor. 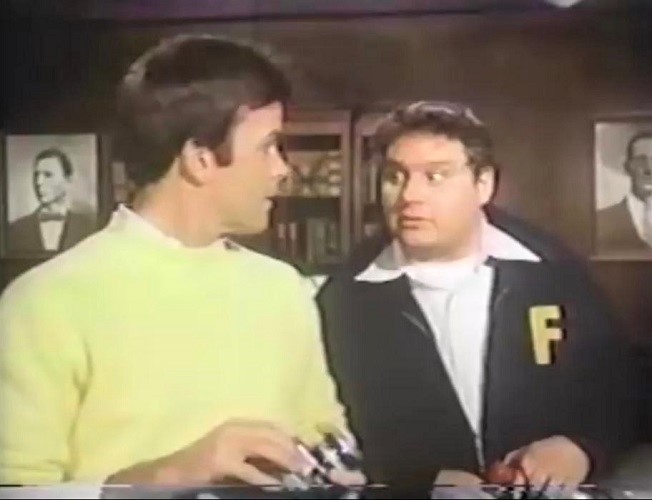 So in the “Animal House” episode of ‘The Goldbergs’, we were seeing the “real” Eric Stratton of Toobworld and not the “fictional” portrayal from the movie, even though here in the Real World, both versions of the character were played by Tim Matheson.

Confused?  Think how it was for me to write that!

One last thing to address: In 2003, a mockumentary was included in the 25th anniversary reissue of the movie which supposedly brought “Where Are They Now” updated for everybody as seen in the movie.

The basic premise for the bonus feature was that the 1978 movie was actually a documentary filmed as it happened back in 1962.

If so, then there had to be reasons within the “reality” of Toobworld as to why so many of the Deltas then looked different in ‘Delta House’, not just Otter.  Within a “Cineverse” (and they are plentiful), it could work that the two movies are real but the 1978 sitcom was “fake media”.

But that won’t fly from the Toobworld perspective.  That’s mainly because Toobworld has to follow the lead of the Real World when it comes to who is occupying the White House as the POTUS.  And the Real World never had a President Blutarski.

So there yuh go.  Keep checking back as the TVXOHOF inductions will continue.  As to regular posts like this?  Maybe once I FINALLY watch my copy of that all-star vampire episode of “What We Do In The Shadows” I may be inspired yet again. 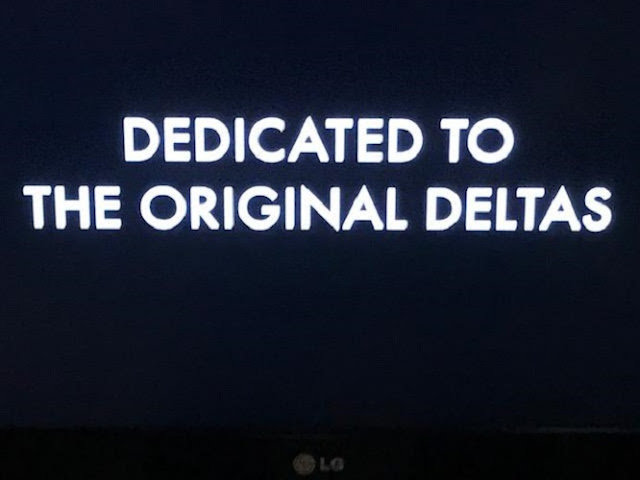